Accessibility links
How A Dog In An MRI Scanner Is Like Your Grandma At A Disco : Shots - Health News To study dogs' brain activity, scientists had to train canines to hold absolutely still for eight minutes without restraint. But how do you get a dog to freeze that long inside a clanging MRI scanner? 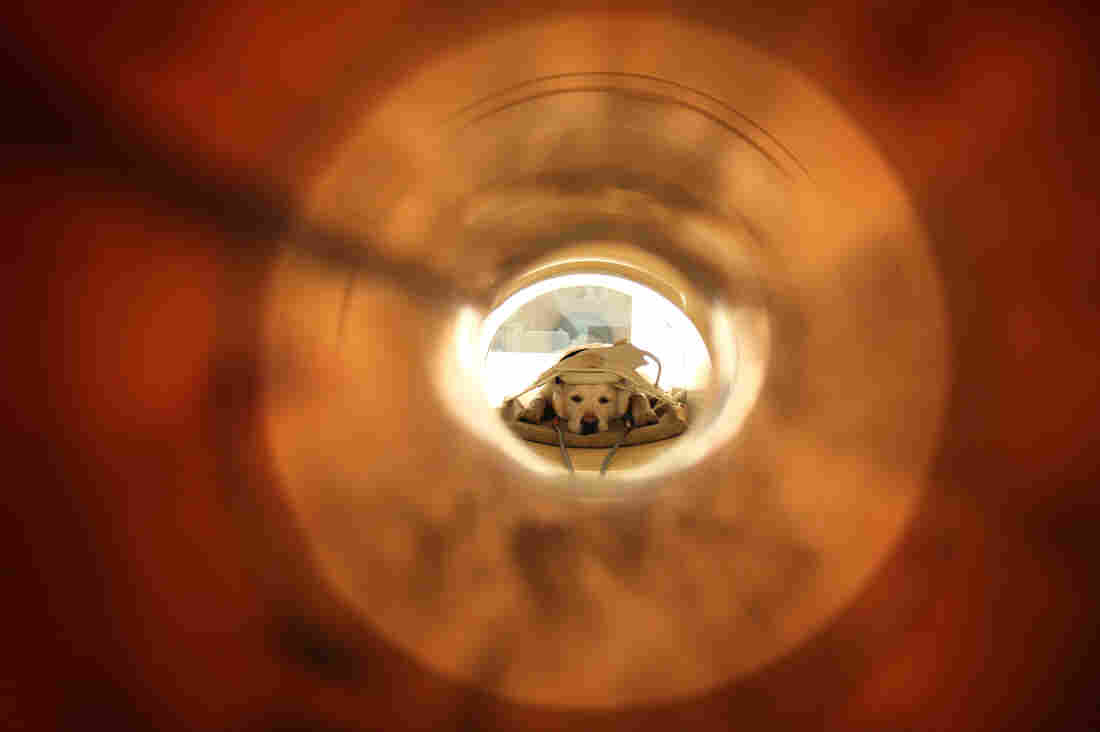 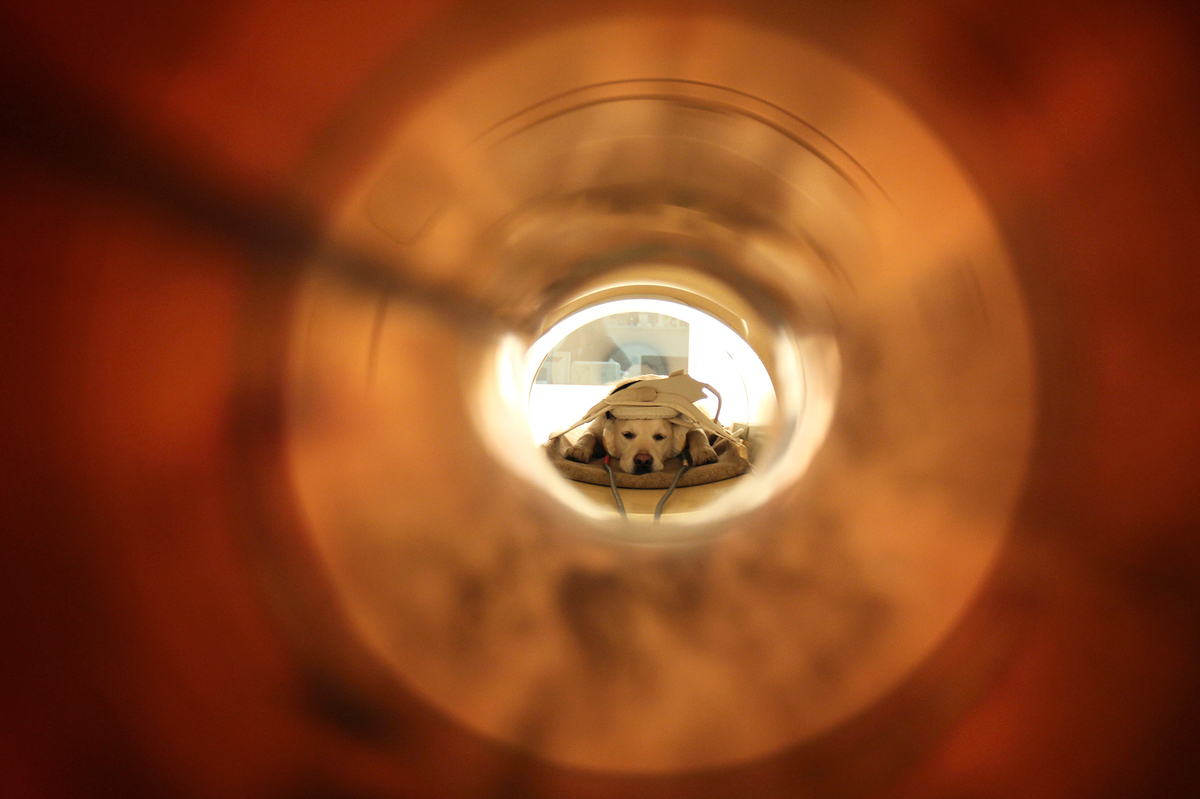 A relaxed, undrugged dog patiently waits its turn in the MRI scanner. The scientists' trick: Make it seem fun.

Dogs can be trained to do a multitude of tasks. Most can learn to sit, lie and stay; others can guide the blind, rescue the injured and maybe even detect cancer. But the hardest thing of all might be to train them to do nothing. Stop scratching. Don't wag your tail. Don't drool. Don't even lick your chops.

My dog can heed the command "stay" for a total of about four seconds. And that's on a good day. So when I read the terms of the recent study in the journal Science — dogs had to lie still for eight minutes straight in a clanging MRI machine, while wearing earphones and a radiofrequency coil — I had to talk to the researchers.

Marta Gacsi, a behaviorial scientist at Eotvos Lorand University in Budapest, was responsible for training the dogs and is a co-author of the study by the Family Dog Project that's exploring how dogs understand and process human language.

"The dogs were not restrained in any way," Gacsi said. "We didn't apply any restraints to keep the dogs in the desired position or in the scanner. They could leave the tube and the scanner at any time they wanted to — and sometimes they did."

The dogs also had to be fully awake inside the scanner, she explained, as their owners talked to them. They could not be drugged. That would have thrown off the results. Oh, and they also had to learn to wear headphones and a radiofrequency coil — and lie still with their head between their paws.

My dog would never do that. Actually, Gacsi insisted, the easy part was teaching them to wear headphones. It's no different than training a puppy to wear a collar, she said.

Still, some of the best-trained dogs — those you might think would be ideal for this study — could not stay still for more than a minute or two and had to be kicked out of the experiment.

"They couldn't stand this," Gacsi said. The dogs were so attuned to the trainers' wishes, they couldn't relax. "OK, I've been lying for two minutes," these smart, good dogs seemed to say. "Now tell me what to do!"

Because those dogs got so frustrated, Gacsi said, "we couldn't use them. They couldn't understand the task was doing nothing."

So what was the trick to getting them to lie still inside an fMRI scanner for an entire eight minutes, with the machine horrifically banging away?

The secret, Gacsi said, was to convince the dogs that the whole thing was fun — that the MRI machine is the place where all the cool dogs party. Before the experiment actually began, all the dogs were invited in — they were praised, got lots of treats. Everyone was having a great time in the scanner.

To get a better sense of the scientists' strategy, Gacsi said, think about how you'd persuade your grandmother to enjoy going to a disco.

"It's noisy," Gacsi pointed out. "So many people! It smells. It doesn't seem fun for a grandma." But throw in some good food, or Grandma's favorite cocktail, and some fun, happy companions, and she might be persuaded.

"We tricked our dogs that we are happy to be there," she said. "So they wanted to be part of the party."

Not every dog, in the end, was persuaded to stay at this particular "disco." For the canines that were left, another difficult moment arose when the researchers had to take away the food reward. A disco without cocktails and salty snacks. Oh, and no dancing.

Now, instead of using cheese bribes, the researchers solely rewarded the dogs with praise.

Each pup learned to stay longer and longer on the table, earning ever more praise. In the end, the scientists ended up with 13 dogs that could understand that they would get a treat at the end of the experiment — but only if they stayed still. Very, very still.

Try that at home.