Accessibility links
For The Rural Poor, Getting Dental Care Can Be Impossible : Shots - Health News A Wisconsin clinic provides free dental care so that poor rural residents can get their teeth fixed. But in most states people aren't so lucky. Millions of people have no access to dental care. 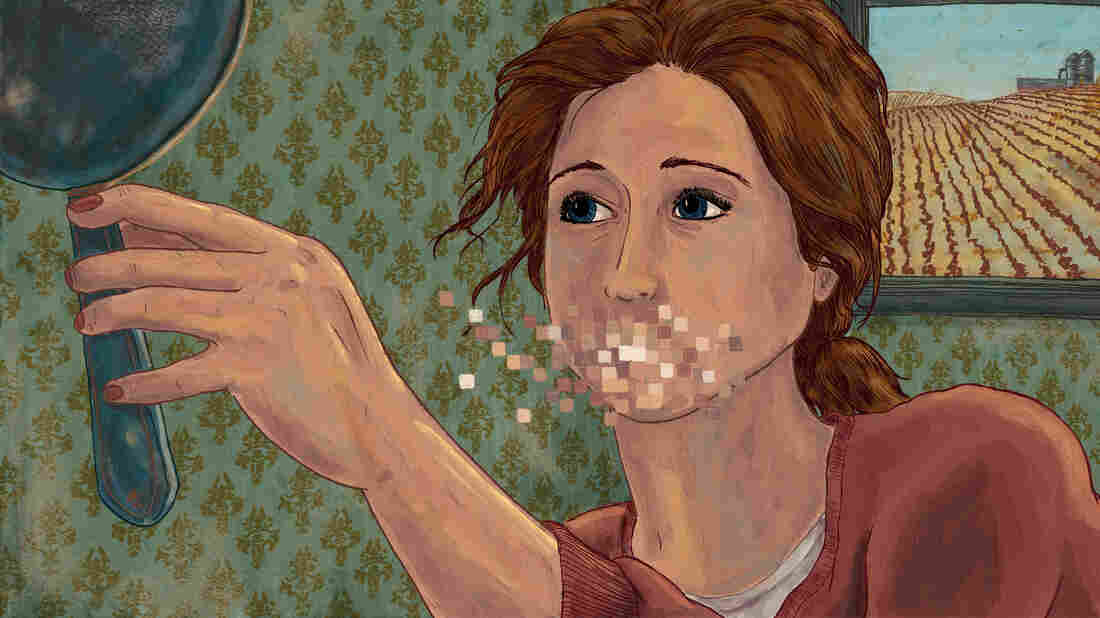 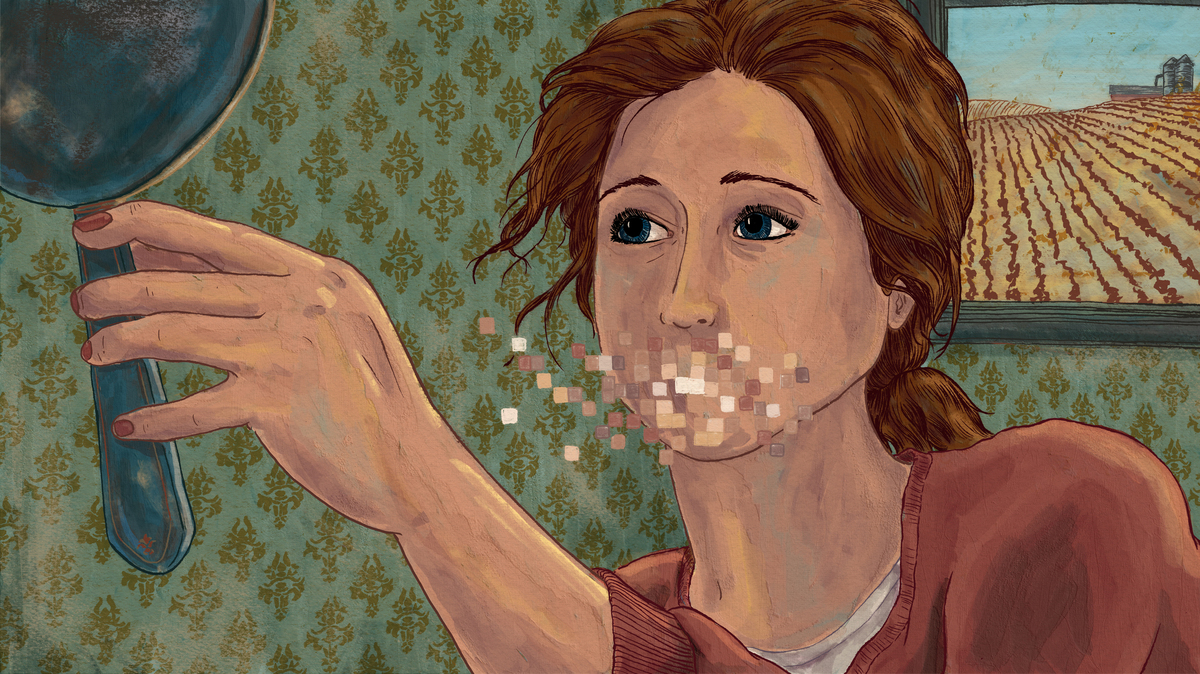 Jessica Stefonik is grinning. She's got a bounce in her step. Her cheeks are a little puffy and her speech is a bit thick.

"It feels weird right now, but I'll get used to it," she says.

What she's trying to get used to is the feeling of having teeth.

On the day we met, Stefonik, a mom of three from Mosinee, Wis., got a set of dentures to replace all of her upper teeth, which she lost over many years to disease and decay.

She's one of millions of people who are poor and live in rural America and have little to no access to dental care.

A study by the Federal Reserve found that a quarter of Americans went without dental care they needed in 2014 because they couldn't afford it.

For those in rural areas, the problem is far worse. A 2015 report by the Pew Charitable Trusts found that people in rural areas are poorer and less likely to have dental insurance than their urban counterparts. They're also less likely to have fluoridated water, and more likely to live in an area where dentists are in short supply. Those dentists that are there probably don't take Medicaid, government health insurance for the poor.

"You've got a double whammy if you're on Medicaid and you're living in a rural area," says Jane Koppelman, research director for the Pew Charitable Trusts' dental campaign.

For years, Stefonik lived in pain from her cracked and decaying teeth. If she got to a dentist at all, they'd usually just pull one tooth and tell her to take better care of the rest.

She was on Medicaid, and in Wisconsin that included dental insurance. Wisconsin's comprehensive dental benefit is considered one of the best in the nation. According to the National Academy for State Health Policy, four states don't offer any dental insurance to Medicaid beneficiaries, and another 15 offer only emergency care.

Still, most dentists in Wisconsin, and across the country, don't accept patients on Medicaid because they say the reimbursement rates are too low. The Wisconsin Dental Association says Medicaid pays only about 35 percent of the dentists' costs.

"My teeth were pretty much rotting out to where I couldn't brush them," Stefonik says.

She tried to just gut it out, hiding her pain from her children so they wouldn't worry about her and living with the gaping holes in her mouth. She ate only soft foods because anything else hurt too much.

"I'm hiding my smile, I'm hiding my pain and I'm trying to be happy, but I just found myself depressed," she says.

Earlier this year she heard about the dental center run by the Marshfield Clinic. It's about 40 miles from her home, takes all comers, and gives them comprehensive dental care for whatever they, or their insurance, can pay.

They pulled all the remaining top teeth in Stefonik's mouth and fitted her for dentures. She paid nothing. The care was paid for by Medicaid.

John O'Brien, a dentist and the clinic's director of dental operations, says he sees about four or five new patients every day, and at least one of them needs more than half their teeth pulled.

When he told a 40-year-old hunter and fisherman at the clinic in Rhinelander Wis., that his periodontal disease was so bad that he needed all his teeth pulled, "He just broke down in tears," says O'Brien.

"He couldn't find someone in 20 years to care for his teeth," O'Brien says. "There are just not enough dentists, so they can pick and choose who they want to treat."

But that's changing. Over the past 12 years, the Marshfield Clinic has opened 10 state-of-the-art dental centers to serve the rural poor.

The clinics are the brainchild of Greg Nycz, executive director of Family Health Center of Marshfield, a string of medical clinics for the poor run by the Marshfield Clinic, a major medical center in central Wisconsin. Through that work, Nycz says, he saw people in pain with broken and missing teeth all the time. And he got calls from desperate people looking for help. One from a young mother haunts him to this day.

"Her child was screaming in pain, alternately screaming and sobbing in the background," he recalls on a recent afternoon.

Nycz talked at length with the mom and learned this had been going on for weeks. She couldn't find a dentist to help.

"As we talked it became very clear that she was viewing herself as a failure as a mother because she couldn't take that pain away from that child, and other mothers could," Nycz says, choking back a sob at the memory. "And I said, 'No more. We're going to fix this.' "

That was in 2002. A year later, the Marshfield Clinic opened its first dental center in Ladysmith, Wis.

Nycz underplays the difficulty in getting this job done. He tells me that state lawmakers were on board because they too got calls like the one he described. So were members of his board, who knew that access to dental care was a crisis in the region.

He has lobbied successfully for changes in laws, for federal grants, and even for low-interest loans from the Department of Agriculture's rural development program. "We've been very lucky to have a supportive Congress," he says.

One key to the clinics' survival is a law that allows community health centers like those the Marshfield Clinic runs to be reimbursed their full costs for caring for Medicaid patients, on the condition that they also care for people who have no insurance.

But Nycz's relentless drive is also a key. "There are a lot of hoops we have to jump through to do this work," he says.

The Marshfield Clinic centers aren't unique. Federal law requires community health centers that get certain types of government support to offer dental care. But the scale of Marshfield's operation is unusual. Its 10 clinics employ 45 dentists, three oral surgeons and 41 hygienists. They have a budget of nearly $44 million and can serve 60,000 patients a year.

Mary Kate Scott, a management consultant who has done extensive research on dental centers that cater to the poor, says Marshfield is ahead of the curve. But she says more states are seeing high-quality dental centers that serve the poor open up, in part because of the expansion of Medicaid under the Affordable Care Act.

Nycz grew up outside Milwaukee. His family didn't have much money. "McDonald's back in the day — 15-cent hamburgers — that was a big treat for us," he says.

He's not your typical hospital executive. His hair is a bit too long. He's big, with a quiet demeanor that barely tames what is a missionary-like zeal to ensure that the poor get quality health care — and dental care is included in that calculation.

His office is piled high with papers. Stacks 1 to 2 feet high cover his desk and extend to the floor. He has a dog-eared copy of a 16-year-old surgeon general's report on the sorry state of oral health in America. Its pages are highlighted and marked with Post-its. He actually had it signed by the author, and grins when he shows me the inscription.

That first dental clinic in Ladysmith was supposed to be a modest affair. They'd work with a dentist who was already in town and put up money so he could care for those who couldn't pay. Maybe they'd add a chair and bring in one more dentist.

The plan was to announce the endeavor just after Labor Day 2002. "On Monday a tornado hit Ladysmith. Rendered his dental facility nonfunctional," Nycz recalls.

It could have been a disaster, but Nycz saw an opportunity. First he and his staff set up a makeshift clinic in a church. Operations manager Terri Kleutsch, who runs all 10 dental clinics, called it a MASH unit.

Then Nycz went to the Family Health Center's board and asked for more money. A lot more. "If we put a big chunk of our reserves into this effort, we could build a state-of-the-art facility that the community can be proud of," he told them.

The board agreed and committed a large chunk of its reserves to the effort, and the state gave them a grant as well.

A year later, a clinic with 17 treatment rooms, big enough to accommodate five dentists and five hygienists, opened on Miner Street in Ladysmith.

In that first year, people came from across Wisconsin, from 42 different counties. Some drove four hours to get there. Some arrived by the busload.

And that's still happening. Anyone who walks in the door of any of the 10 clinics is welcome and gets high-quality care.

"We don't leave vets behind, we don't leave people with HIV/AIDS behind, the disabled, exceptionally heavy people. We want everybody to have access," Nycz says.

"Greg is a visionary," says Jane Koppelman of Pew. "He's taking what we know about science and he's applying it to practice."

What we know is that oral health is closely tied to overall health. Research shows bad teeth are linked to a host of problems, including heart disease and premature birth. They can aggravate diabetes and spread infection to the heart.

"When you treat the gum disease, there are fewer complications and lower costs in treating people like diabetics and people with heart disease," Koppelman says.

At the Marshfield Clinic centers, dental care is treated as another part of general health care. Dental and medical records are combined. Patients who come to the dentist get their blood pressure and blood sugar checked. Patients who are there for a filling may end up being sent to the hospital for a stress test or diabetes followup.

And doctors at the health centers routinely look into patients' mouths. If there's a problem, they refer them to the dentist.

Nycz and his colleagues think that providing dental care not only makes people healthier, it can also make them more financially secure. That's because, very simply, bad teeth can make it hard to get a job.

"You've got a mouthful of broken, cracked and decaying teeth, your ability to contribute to society is impaired, and your options are impaired," Nycz says.

In rural Wisconsin, many manufacturing jobs have disappeared and been replaced with service jobs that often aren't open to people with rotten or missing teeth. The Marshfield Clinic dental centers work with job placement programs to ensure that if someone has an interview and needs dental work to be ready, they will fit the person in and get the work done in time.

For Jessica Stefonik, just the ability to smile again and enjoy normal social events may be enough.

"I haven't smiled in probably eight years. I mean a good smile," she says. "And I'm very excited to be able to go out to eat with my family and not have soup," she adds with a laugh.

Armed with her new teeth and a paper bag carrying denture adhesive and a new toothbrush, she walks to the lobby to see her daughter, Kylie.

"Hey, Kylie. Did you see my teeth? Do you like 'em?" Stefonik asks the blond girl sitting quietly in a corner chair.

The little girl whispers back. "They're awesome."