Accessibility links
Will A Drone Be Delivering Your Medicine? : Shots - Health News Doctors, hospitals and entrepreneurs say drones could become a faster, cheaper way to deliver medical tests. But there are a lot of details to be worked out before your blood test hits the runway. 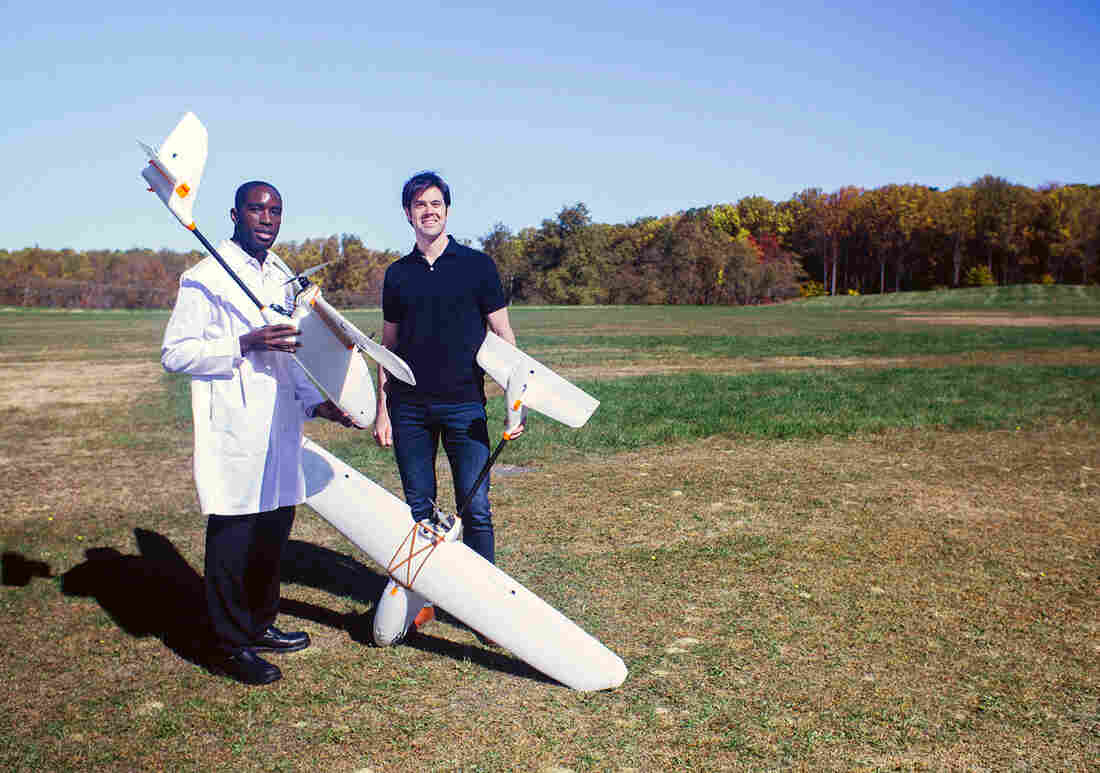 Timothy Amukele, an assistant professor of pathology at Johns Hopkins Medical School in Baltimore, and systems engineer Jeff Street are trying to figure out how to use drones to deliver blood samples. Johns Hopkins School of Medicine hide caption 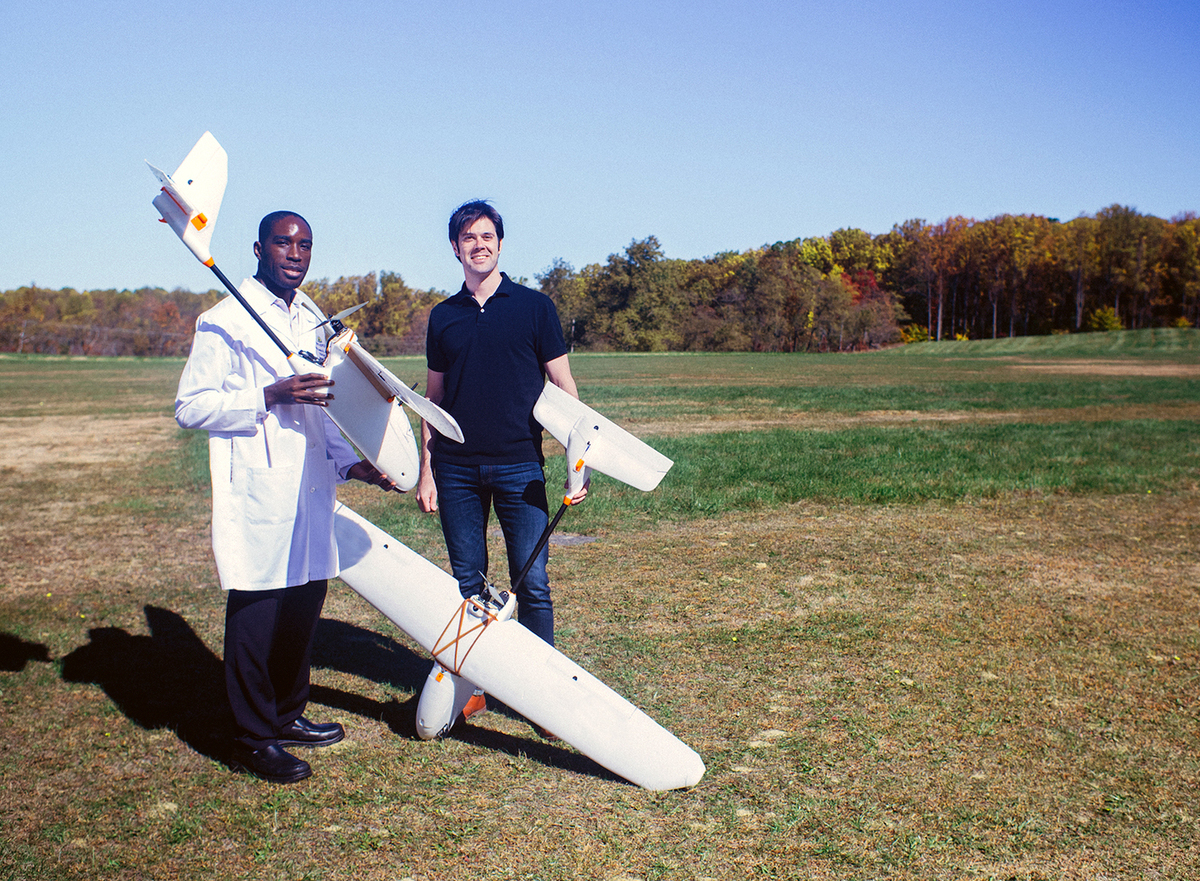 Timothy Amukele, an assistant professor of pathology at Johns Hopkins Medical School in Baltimore, and systems engineer Jeff Street are trying to figure out how to use drones to deliver blood samples.

Three years ago, Geoff Baird bought a drone. The Seattle dad and hobby plane enthusiast used the 2.5-pound quadcopter to photograph the Hawaiian coastline and film his son's soccer and baseball games.

But his big hope is that drones will soon fly tubes of blood and other specimens to Harborview Medical Center, where he works as a clinical pathologist running the hospital's chemistry and toxicology labs. In the near future, Baird and others say, drones could transform health care — not only in rural areas by bringing critical supplies into hard-to-reach places, but also in crowded cities where hospitals pay hefty fees to get medical samples across town during rush hour. By providing a faster, cheaper way to move test specimens, drones could speed diagnoses and save lives. "It's super exciting to me," Baird says.

The technology seems to be there. Drones are delivering pizza in New Zealand and taking condoms to parts of Ghana that lack reliable roads or access to birth control. Tech giants and big retailers, including Amazon and Wal-Mart, are testing drones for deliveries and pickups.

However, "blood specimens are not like a book or a shoe," Timothy Amukele, an assistant professor of pathology at Johns Hopkins School of Medicine, said in a TED talk earlier this year. No one knew whether bumpy flights would hurt cells or otherwise make biological samples unsuitable for lab tests.

Amukele and his colleagues transport donated blood samples by drone in this video. The drones climbed to over 328 feet above ground and circled the field for six to 38 minutes.

So Amukele and co-workers conducted several experiments to find out. In their first study, published in PLOS ONE last July, the team collected several hundred blood samples from healthy volunteers. They drove the samples to a flight field an hour northwest of Baltimore, packed half of them into foam containers and flew them around in a drone for up to 40 minutes. The other samples sat. All specimens went back to the lab for 33 routine tests. The results were the same for each group, suggesting samples stay intact during drone flights.

In follow-up analyses, drone transport also seemed safe for samples containing microbes and for donated blood. The microbial study was published in August in the Journal of Clinical Microbiology; a manuscript on the blood products study is under review. (Videos of each experiment can be found here.)

"The results don't surprise me," says Bill Remillard, chief technical officer at TriCore Reference Laboratories in Albuquerque, N.M. "But until you do the science, you just don't know."

While Amukele's experiments show it's feasible to move lab specimens with drones, pilot studies in real clinical settings are still needed to work out logistics. Questions include how to request a drone, where it would land, who would pick up the samples and how often a drone would need new batteries.

Safety is another concern. Some drones drop cargo with parachutes or other release mechanisms, making it harder for people to tamper with the vehicles. But as far as how safe drones are, "those data don't yet exist," Amukele says. Though millions of drones have been sold worldwide, "we don't know how many crashes happen and how many are due to operator error," he says. The Federal Aviation Administration is starting to collect this data.

It's a promising development for an industry where legislation has lagged behind the fast-advancing technology. For years, the FAA had imposed a near-ban on commercial drones, only allowing them to fly if businesses applied for an exemption. But in June the agency announced a set of rules for companies to operate drones in the United States, and on Aug. 29 those regulations took effect. The FAA expects the number of registered commercial drones to jump 30-fold, from 20,000 to 600,000, within months.

"The rules had not been well defined. This is an attempt to define them," says Lawrence Williams, who heads business development at Zipline, a Silicon Valley startup making drones for medical applications. Zipline is focusing much of its effort in Rwanda, where less crowded skies, relative to the U.S., make it easier to negotiate drone delivery of blood samples.

Another drone startup, Vayu, whose CEO is a co-author on the PLOS ONE drone study, is also dipping into the international arena. In July, the Michigan-based company did a demo flight in Madagascar, carrying specimens from a remote village to a lab for testing. Vayu makes a quadricopter plane capable of vertical takeoff — an appealing feature for hospitals with limited landing space.

While it's easy to see how drones could improve health care in poor countries, Amukele thinks medical drone delivery could make a bigger splash in the U.S. Compared to Africa and developing countries, the U.S. does much more testing per person, he says, and many of the country's 200,000 medical labs are collection-only sites that rely on central labs for testing. So "there are likely to be more [medical drone users] in the U.S. than anywhere else," Amukele says.

As Zipline prepares to launch blood delivery drones in Rwanda, the company is also seeking regulatory approval for three projects using drones to bring medical supplies to underserved communities in the U.S.

One project would integrate drone delivery of medications with telemedicine appointments at a small clinic in rural Maryland. Another would use Zipline drones to link a large health care distribution center to hospitals and tribal clinics around Reno, Nev. And for the third project, the company would partner with a regional blood bank in Washington state, creating a plan to distribute blood to various hospitals and clinics in the event of earthquakes and other natural disasters.

Johns Hopkins was initially skeptical of Amukele's experiments — the review board thought his first proposal was a joke — but now the university is giving the pathologist space and funds to hire a drone engineer and continue researching medical delivery drones.

In Seattle, Baird is working with Amukele and aeronautical engineers at the University of Washington on their own drone proposal. Ideally their test flights would take samples from Seattle Children's to Harborview, a bustling facility that runs thousands of tests each day. However, that flight path would violate the FAA rule requiring drones to stay within the pilot's line of sight. So the initial plan is to run 2-mile line-of-sight flights between the children's hospital and UW Medical Center, Baird says.

Drones could be a huge help in poison emergencies, Baird says. In a typical scenario, a child gets rushed to the emergency room after accidentally swallowing some pills. Though routine tests can rule out some things, clinics often send samples to a centralized toxicology lab for confirmation and further testing. This can take hours. A drone could zip samples downtown in five to 10 minutes, Baird says, helping a child get diagnosed and receive medications more quickly.

He also envisions drones collecting samples from patients' homes and taking them to the hospital. You could prick your finger and rub the blood onto a card that a drone could fly back to the lab for testing, Baird says.

In the meantime, though, Zipline's U.S. projects remain on hold, awaiting the regulatory go-ahead, and the Seattle team continues studying maps and sketching flight routes for the small drone test it hopes to launch. The team has presented the plan to grant agencies and gotten positive responses — but no funding yet.

Like other technological advances, Baird suspects drones for medicine will "wait, wait, wait and then go very quickly."