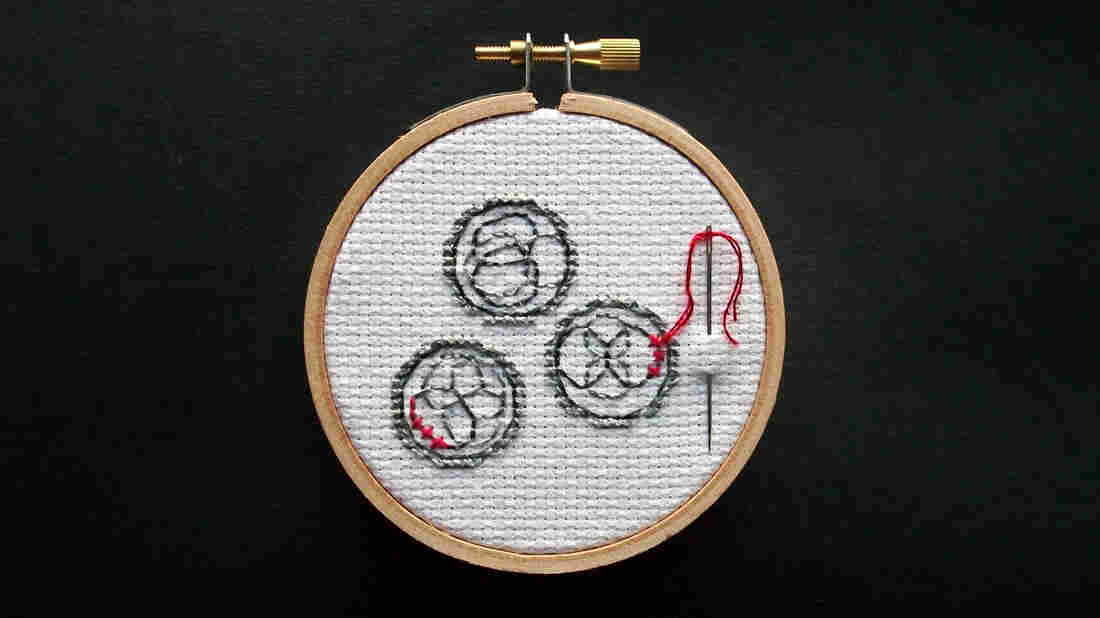 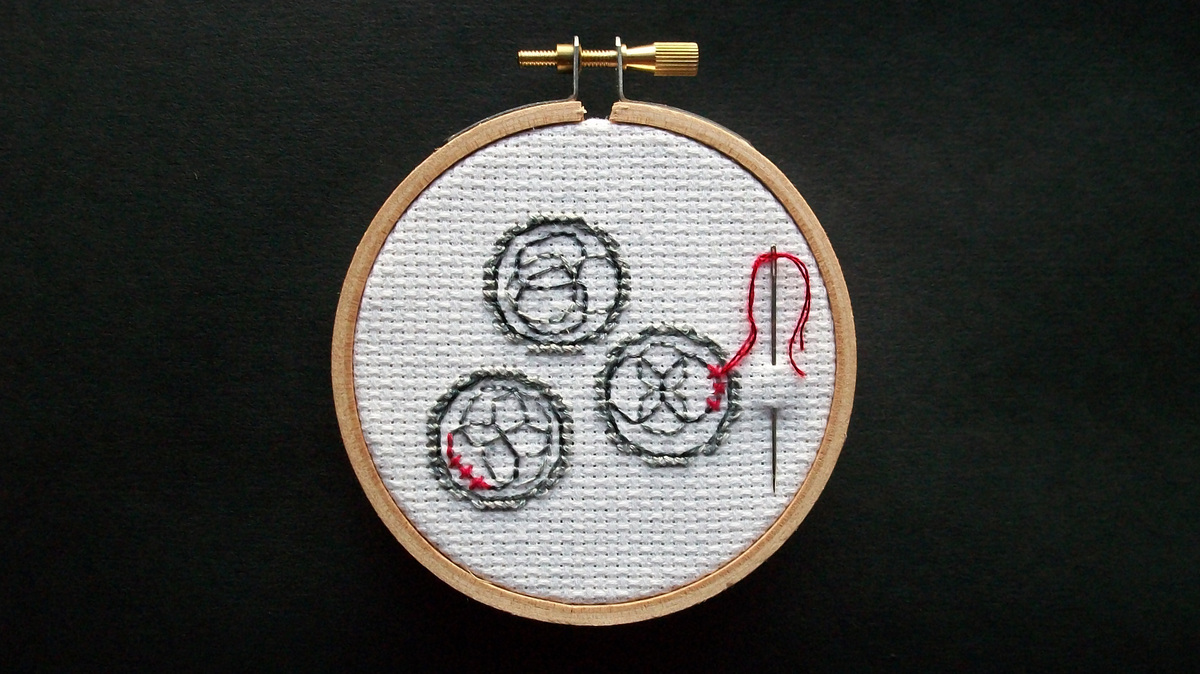 A scientist in Sweden has started trying to edit the DNA in healthy human embryos, NPR has learned.

The step by the developmental biologist Fredrik Lanner makes him the first researcher known to attempt to modify the genes of healthy human embryos. That has long been considered taboo because of safety and ethical concerns.

Lanner is attempting to edit genes in human embryos to learn more about how the genes regulate early embryonic development. He hopes the work could lead to new ways to treat infertility and prevent miscarriages. He also hopes to help scientists learn more about embryonic stem cells so they can someday use them to treat many diseases.

The fear is that Lanner's work could open the door to others attempting to use genetically modified embryos to make babies.

Making changes to the DNA in human embryos could accidentally introduce an error into the human gene pool, inadvertently creating a new disease that would be passed down for generations, critics say.

Some also worry the experiments could open the door to so-called designer babies that would let parents pick and choose the traits of their children.

Lanner, however, says he is initially planning only to study the modified embryos for the first seven days of their growth and would never let them develop past 14 days. The potential benefits could be enormous, he argues.

"Having children is one of the major drives for a lot of people," Lanner says. "For people who do struggle with this, it can tend to become an extremely important part of your life."

Lanner also hopes to learn things that could help scientists who are trying to turn stem cells from human embryos into new treatments for diseases.

"If we can understand how these early cells are regulated in the actual embryo, this knowledge will help us in the future to treat patients with diabetes, or Parkinson, or different types of blindness and other diseases," he says. "That's another exciting area of research." 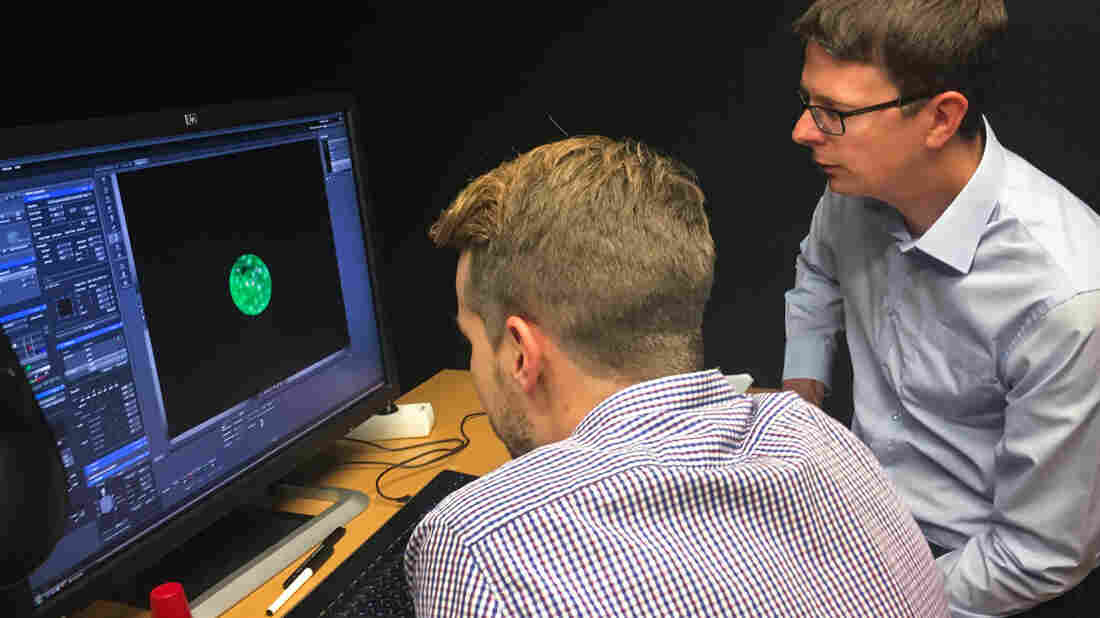 Fredrik Lanner (right) of the Karolinska Institute in Stockholm and his student Alvaro Plaza Reyes examine a magnified image of an human embryo that they used to attempt to create genetically modified healthy human embryos. Rob Stein/NPR hide caption 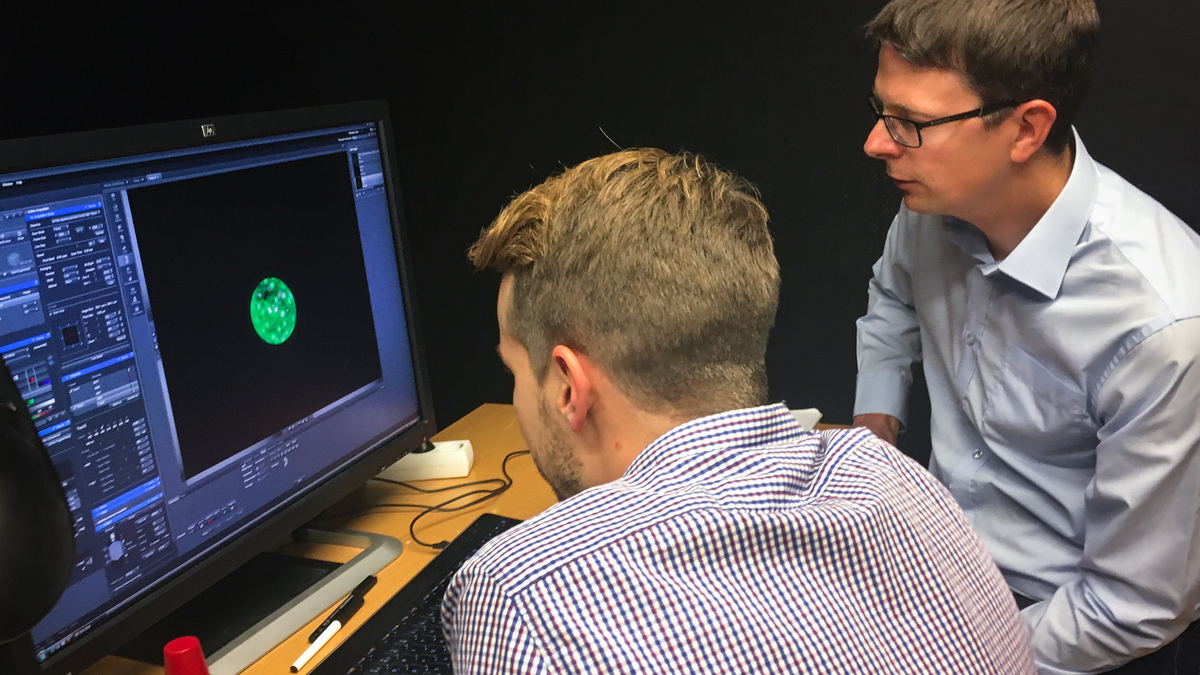 Fredrik Lanner (right) of the Karolinska Institute in Stockholm and his student Alvaro Plaza Reyes examine a magnified image of an human embryo that they used to attempt to create genetically modified healthy human embryos.

NPR recently got exclusive access to Lanner's labs at the Karolinska Institute in Stockholm to watch some of his early efforts.

During the visit, Lanner and a graduate student carefully thawed five embryos donated by couples who had gone through in vitro fertilization at the Karolinska University Hospital to try to have children.

One of the embryos didn't survive the freezing and thawing process. The researchers gingerly placed each of the remaining 2-day-old embryos into a dish on a special microscope.

"You need to be stable on your fingers and hands while doing this," Lanner said, quipping, "You don't want to be dropping the embryos while taking them out."

With Lanner looking on, the student injected one of each embryo's four cells with a genetic engineering tool known as CRISPR-Cas9 while holding the embryo in place with a thin glass rod.

The gene-editing tool comprises two molecules that can zero in on individual genes and make very precise changes to the DNA. It lets scientists modify DNA much more easily and precisely than ever before. Lanner calls the technique a "game changer."

"It's not just quicker or cheaper," Lanner says. "This actually opens the door to start to look at this for the first time, because we could not do this at all previously in the human embryo. The technology was just not efficient enough to try to look at individual gene function as the embryo develops."

Lanner is planning to methodically knock out a series of genes that he has identified through previous work as being crucial to normal embryonic development. He hopes that will help him learn more about what the genes do and which ones cause infertility.

He declined to specify which genes he's targeting until the work is reviewed and published.

During the visit by NPR, one of the embryos got severely damaged when the injection needle got clogged. But the researchers successfully injected the remaining three embryos and placed them in an incubator to continue developing. One embryo divided again immediately after being injected, showing that it could still grow.

Two of the embryos survived in good enough shape to be analyzed later, Lanner explained in an email afterward.

Lanner has now done this on at least a dozen embryos, but is still studying his results and refining his techniques. He remains unsure how well the editing is working so far. However, he's confident he'll be able to modify individual genes in the embryos to determine their function.

But just the act of attempting to edit the DNA in healthy human embryos is extremely controversial. Chinese scientists triggered an international uproar earlier last year when they tried to edit the DNA of human embryos even though they used only defective embryos that had no hope of developing.

Experiments like these intensified calls for a moratorium on such research, and the National Academies of Sciences, Engineering and Medicine launched the Human Gene-Editing Initiative to sort through the complex scientific and ethical issues they raise.

Organizers of an international summit convened in Washington, D.C., last year as part of that process concluded that it was far too early to try to create a baby from embryos that had their genes edited.

But the organizers said basic research like Lanner's could be acceptable. A final report from the gene-editing initiative is expected late this year or early next.

Still, not everyone agreed with the summit organizers' assessment. Some people have moral objections to doing any research on human embryos because they consider a human embryo to have the moral standing of a person.

One fear is that scientists could make some kind of mistake, accidentally creating new diseases that would be passed down for generations.

"When you're editing the genes of human embryos, that means you're changing the genes of every cell in the bodies of every offspring, every future generation of that human being," Darnovsky says. "So these are permanent and probably irreversible changes that we just don't know what they would mean."

But even if it's safe, Darnovsky and others still worry about what designer babies would do to society.

"If we're going to be producing genetically modified babies, we are all too likely to find ourselves in a world where those babies are perceived to be biologically superior. And then we're in a world of genetic haves and have-nots," Darnovsky says. "That could lead to all sorts of social disasters. It's not a world I want to live in."

Lanner says he has no interest in ever doing anything like that. In fact, at the moment it would be illegal in Sweden. And, Lanner says, much more research would be needed to make sure it would be safe before anyone tries to use a genetically modified embryo to make a baby to prevent diseases.

"It's not a technology that should be taken lightly," he says. "So I really, of course, stand against any sort of thoughts that one should use this to design designer babies or enhance for aesthetic purposes."

But Lanner argues that basic research is necessary and morally acceptable, and banning it would be counterproductive.

"I think it's wise to be allowed to do fundamental research so we can gain more information about this technology and potentially use it in the future," he says.

Lanner plans to continue attempting to edit the DNA in healthy human embryos until he develops efficient editing techniques that will allow him to study the genes involved in early embryonic development. Scientists in Britain are planning to start similar experiments later this year.

Research using human embryos is legal in the U.S., but not with the support of federal funds. U.S. labs that are known to be active in human embryo research have not announced any plans to proceed with gene-editing experiments.