Accessibility links
Carfentanil Overdoses Put Strain On Cincinnati : Shots - Health News Carfentanil, a potent variation on fentanyl, is being blamed for a wave of opioid overdoses. In Cincinnati, the coroner, crime lab and first responders are struggling to keep up. 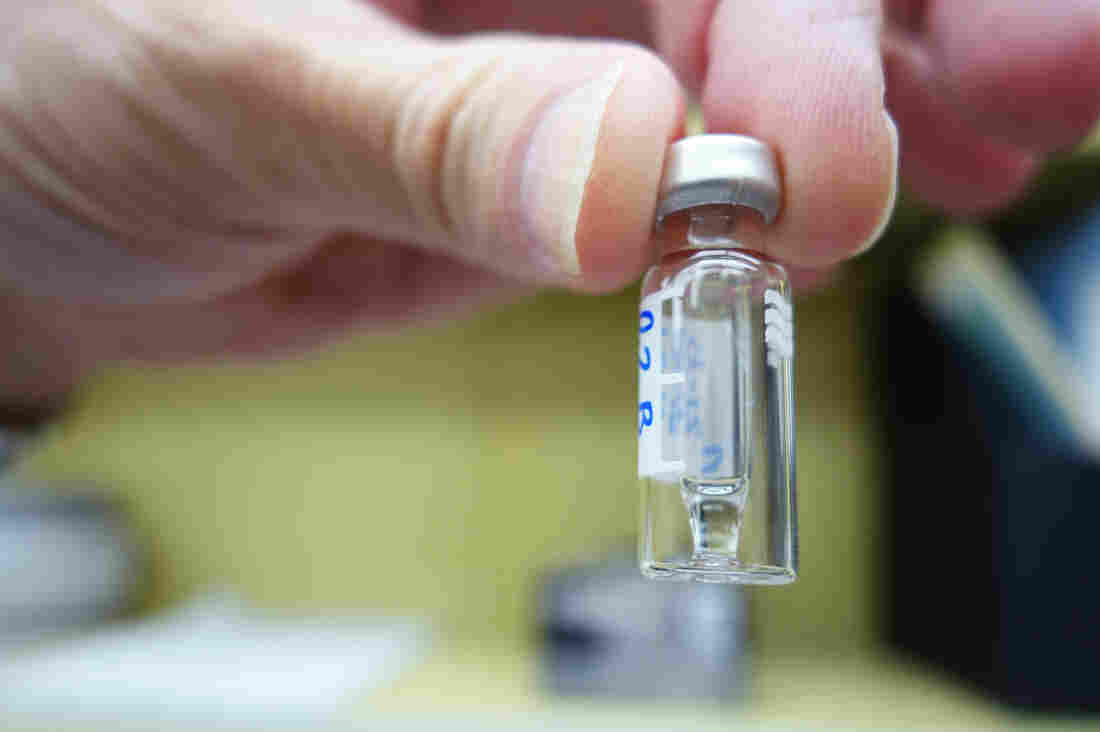 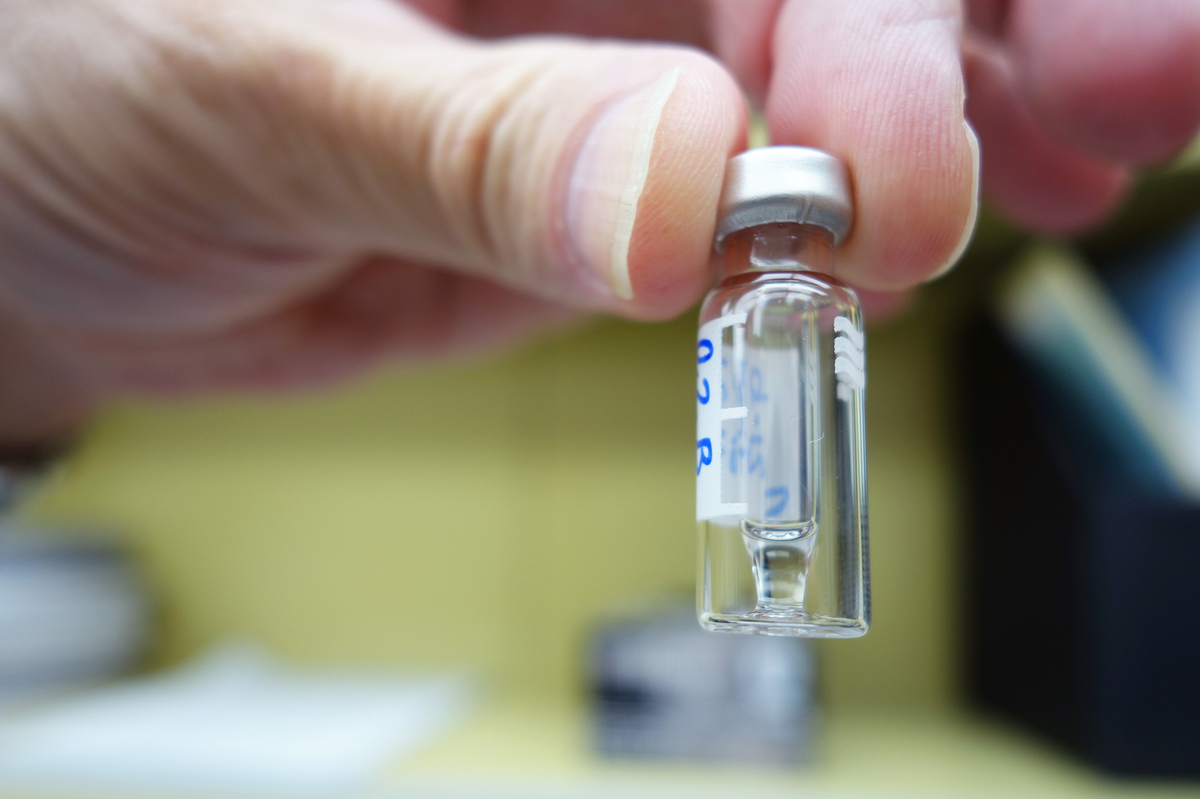 Bob Topmiller, chief of toxicology at the Hamilton County Coroner's Office, holds a small vial containing carfentanil extracted from a sample of blood.

Jamie Landrum has been a police officer for two years in District 3 on the west side of the Cincinnati. In late August, the city was hit by 174 overdoses in six days. Landrum says officers were scarce.

"We were literally going from one heroin overdose, and then being on that one, and hearing someone come over [the radio] and say, 'I have no more officers left,' " Landrum says. Three more people overdosed soon after that.

Heroin isn't new in Cincinnati, but the recent surge in overdoses is being blamed on an even more potent drug called carfentanil. It's 100 times stronger than fentanyl, a more common synthetic opioid that is itself much stronger than heroin. Carfentanil is used to sedate elephants. It can be dangerous to even touch it without gloves.

City and county agencies in the Cincinnati area — from law enforcement to the county coroner — are straining to respond to the carfentanil wave.

Carfentanil is part of a shift to synthetic opioids in Cincinnati and around the country. Last year in Hamilton County, Ohio, there were more deaths attributed to fentanyl than to heroin.

Suspected carfentanil cases were first reported in the U.S. in July in Ohio. The rate of overdoses has dropped since that shocking 174 in six days, but not by much. There are currently 20 to 25 overdoses a day, on average, reports Hamilton County's heroin task force. Police are calling it the new normal.

About an hour into a recent shift, Officer Landrum gets a call. A man has overdosed at an apartment building on the outskirts of town. His girlfriend found him and called 911.

By the time we get there, there's a crowd outside. The man is unconscious in the back of the ambulance, and EMTs have given him three doses of Narcan, an antidote for opioid overdose. For a heroin overdose, one round of Narcan is usually enough.

EMTs clap and shout his name, trying to wake him up, but something's wrong. They turn off the music blaring in the ambulance and continue working. After a few minutes, Officer Landrum gives me an update.

"This is the most I've ever seen," she says. "He's gotten four Narcans so far, and he's still not awake."

The EMTs decide to take him to the hospital. We follow, not knowing if the man will make it. "Whatever he got ahold of, it's really bad," Landrum says.

For first responders, the arrival of carfentanil can be summed up with one word: More. More overdoses, more Narcan, more time spent on each call.

And when the efforts to save someone's life fail, more work gets passed on to the Hamilton County Coroner's Office.

"The caseload keeps getting larger and larger," says Bob Topmiller, who heads the toxicology section at the coroner's office, where they test blood and urine. "We may have had a 100- or 150-case backlog a year ago, and it's almost doubled." The time it takes to process a sample has also doubled, from one month to two.

Evidence of the deluge is all over the lab: Equipment spills into the hallways, envelopes cover the intake desk, and everyone seems to be busy.

And it's more than the number of cases causing the flurry of activity. It's the fact that the drug was never meant for people.

"It's what we don't know about this drug that scares us," says Dr. Lakshmi Sammarco, the coroner for Hamilton County. "We don't have any human testing data. We don't know what the lethal level really is. There is no therapeutic level — it's not meant for human use." 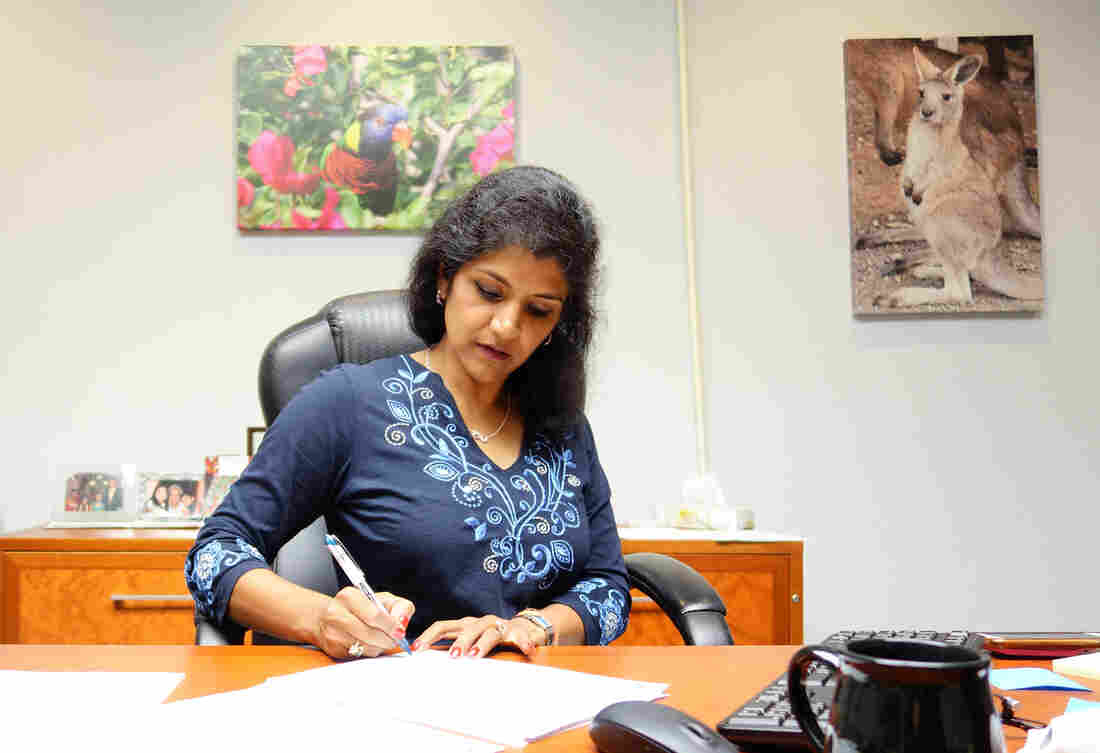 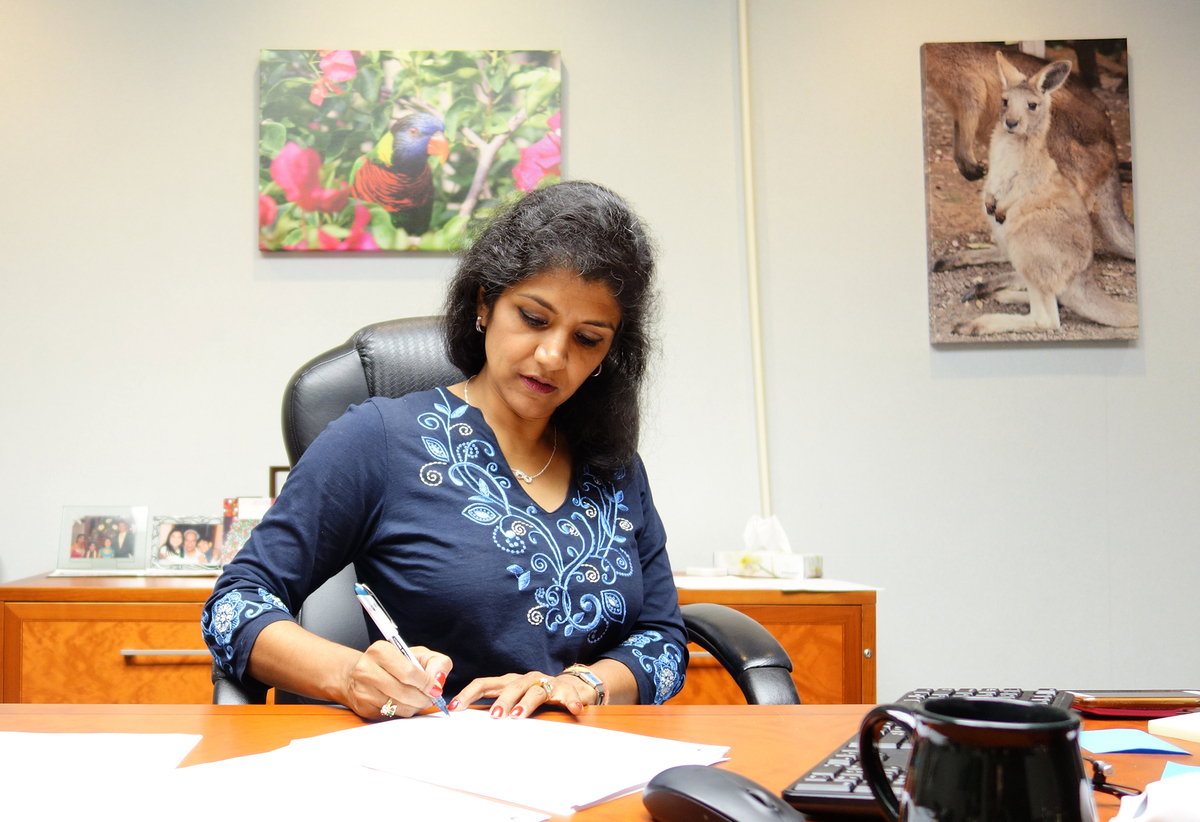 Dr. Lakshmi Sammarco, the coroner for Hamilton County, Ohio, worries about the paucity of information about how carfentanil, an animal drug, affects humans.

That means Sammarco's team is using the samples coming in to try to extrapolate some important information, like the lethal dose per kilogram of body weight, or how long carfentanil stays in someone's system — things that could help the people treating the overdoses.

Sammarco says this process is part of a pattern they've dealt with before, playing catch up with the suppliers as new drugs appear.

"However, in the spectrum of opiates, this is about max," she says. "Out of all of them, carfentanil really is the most potent."

For now, Sammarco can only say that there have been eight deaths in which carfentanil might be the cause. Her office is working to test samples dating back to July, when the drug first showed up in Ohio.

At the hospital, Landrum follows the overdose victim into the emergency room. After about half an hour, doctors and nurses stabilize him.

We leave after that. The man didn't have any drugs on him, so he wasn't charged with any crime. His girlfriend wouldn't say where the drugs came from, though she did mention that the two of them had overdosed the week before.

"Believe it or not, we'll probably be responding out for her here shortly," says Landrum. Even after close calls, people keep using. Addiction is too strong.

What's worse, the danger of carfentanil seems to act as an advertisement: People seem to equate near death with a really good high, and the problems in Cincinnati are attracting customers. Landrum says recently she met a couple from Indianapolis in town to buy drugs. Another officer talked to people from central Kentucky.

So far, the DEA says carfentanil has only been confirmed in Ohio and Kentucky. Other states are starting to test for it, bracing for its arrival.