Accessibility links
Doll Therapy For Alzheimer's: Calming Or Condescending? : Shots - Health News Hugging a doll can soothe an upset toddler, and some say it can do the same for people with dementia. But critics say this form of therapy infantilizes adults. 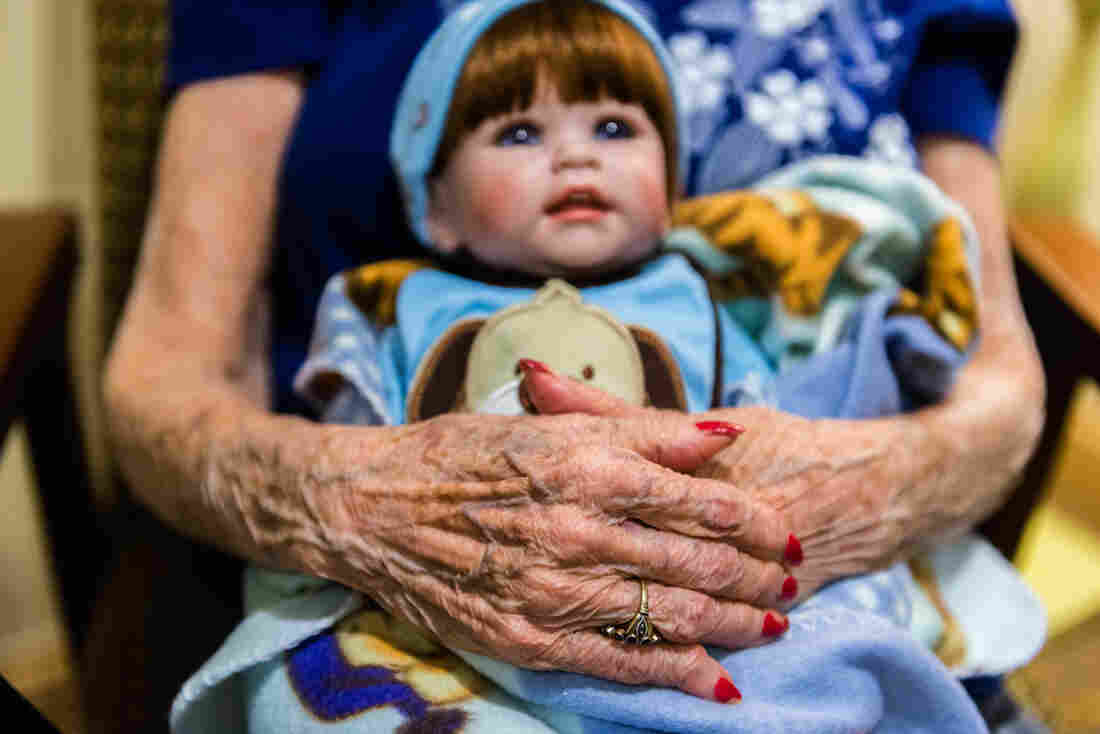 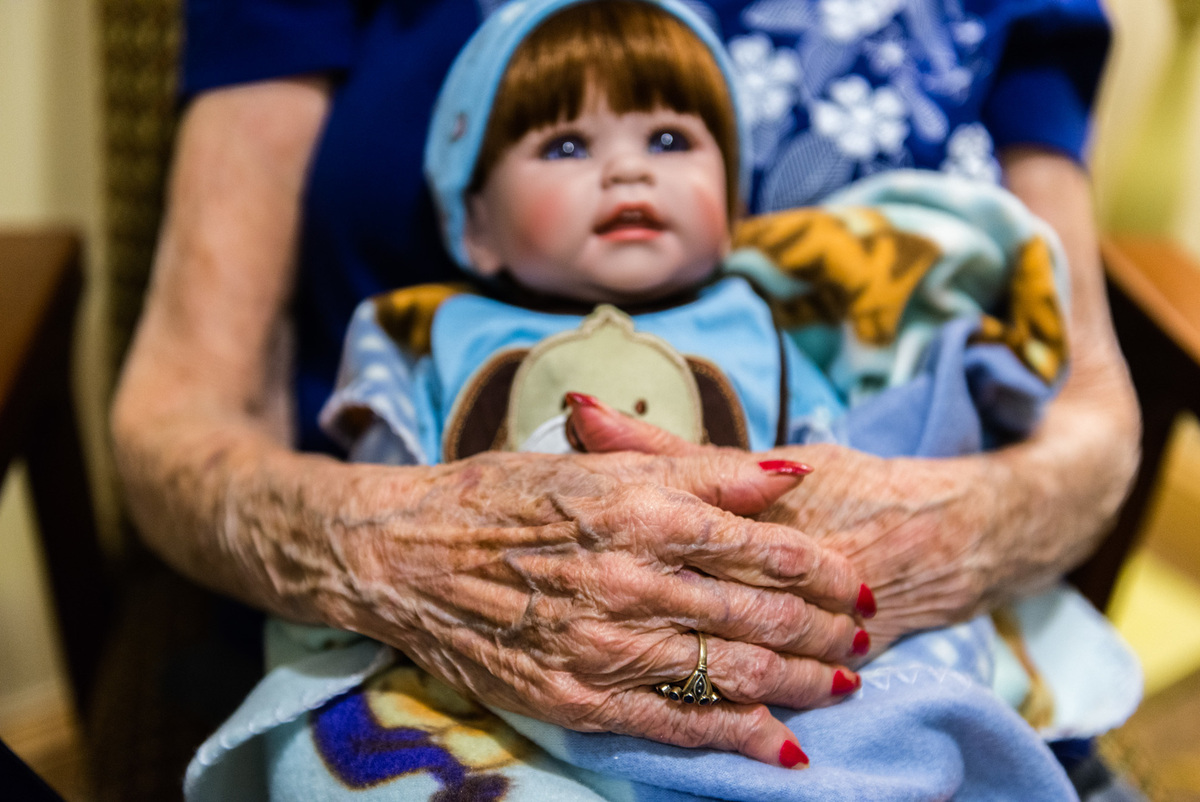 Vivian Guzofsky, 88, holds a baby doll at Sunrise Senior Living in Beverly Hills, Calif. Guzofsky, who has Alzheimer's disease, is calm when taking care of the dolls.

Sitting beside a neatly made crib, 88-year-old Vivian Guzofsky holds up a baby doll dressed in puppy dog pajamas.

"Hello gorgeous," she says, laughing. "You're so cute."

Guzofsky, who has Alzheimer's disease, lives on a secure memory floor at a home for seniors in Beverly Hills, Calif. She visits the dolls in the home's pretend nursery nearly every day. Sometimes Guzofsky changes their clothes or lays them down for a nap. One morning in August, she sings to them: "You are my sunshine, my only sunshine. You make me happy when skies are gray."

No one knows whether she believes she is holding a doll or a real baby. What the staff at Sunrise Senior Living do know is that Guzofsky, who can get agitated and aggressive, is always calm when caring for the dolls.

Doll therapy is catching on at nursing homes and other senior facilities across the country. It's used to help ease anxiety among residents with dementia, who can experience personality changes, agitation and aggression. But the therapy is controversial.

Supporters say the dolls can lessen distress, improve communication and reduce the need for psychotropic medication. Critics say the dolls are demeaning and infantilize seniors. 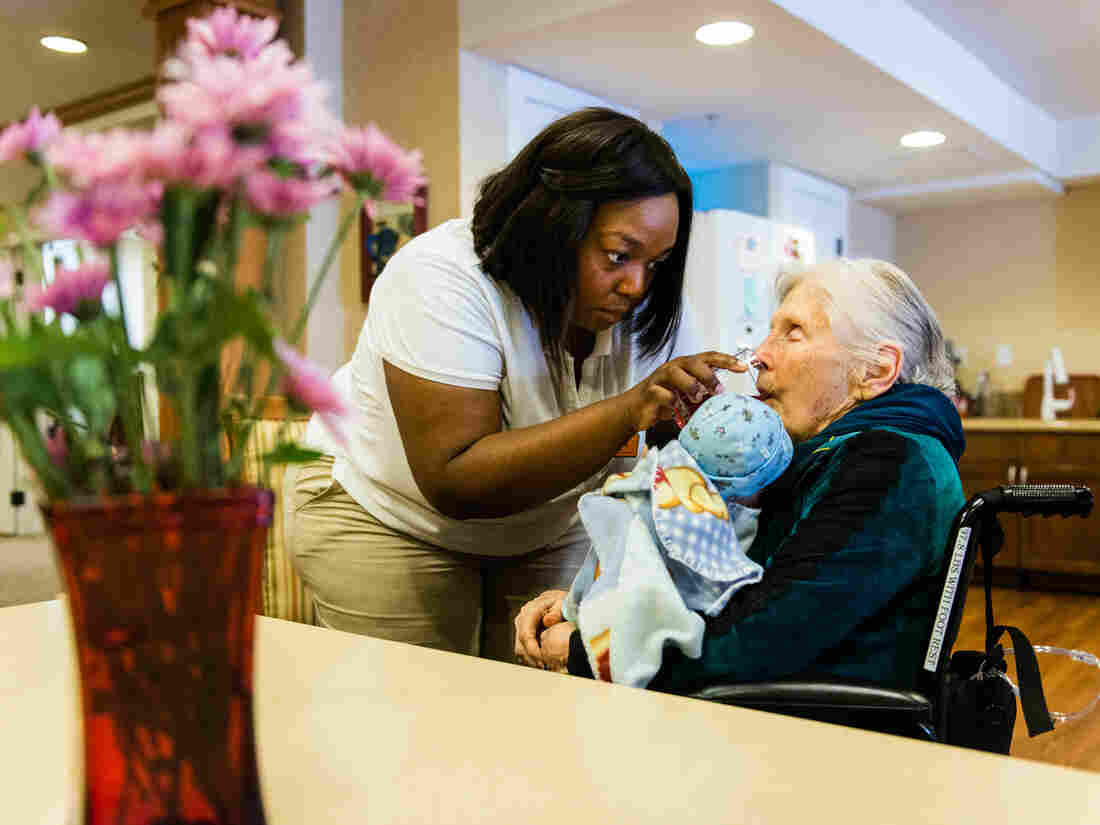 Marilou Roos, 87, rarely speaks and sleeps much of the day. But caregiver Jessica Butler says Roos brightens up when caring for the dolls. Heidi de Marco/Kaiser Health News hide caption

Typically, caregivers will give residents the option of holding, changing or dressing the dolls, without saying whether the dolls are babies or toys. Caregivers may also use the dolls to start conversations about the residents' own children or grandchildren.

Care providers who use the technique say the dolls help engage elderly people who are no longer able to participate in many activities.

"A lot of people with Alzheimer's are bored and may become depressed or agitated or unhappy because they aren't engaged," says Ruth Drew, director of family & information services at the Alzheimer's Association.

Caregivers aren't trying to make their charges believe the dolls are real infants, Drew says. They are just "trying to meet them where they are and communicate with them in a way that makes sense to them," she says.

But some care providers do not like the technique.

"They are adults and we want to treat them like adults," says Stephanie Zeverino, who works in community relations at a Belmont Village center in Los Angeles. "These are very well-educated residents."

Staff members there work with residents to play brain games that promote critical thinking, she says. And they use other types of therapy including art and music.

"We want to provide a sense of dignity," Zeverino says.

Studies on doll therapy are limited, but some research has shown it can reduce the need for medications and lessen agitation, aggression and wandering.

"Having the doll ... offers them an anchor or a sense of attachment in a time of uncertainty," says Gary Mitchell, a nurse specialist at Four Seasons Health Care facilities in Northern Ireland, and author of a new book: Doll Therapy in Dementia Care: Evidence and Practice.

"A lot of people associate the doll with their younger days and having people to care for," Mitchell says.

However, he acknowledges that doll therapy can perpetuate the stigma associated with dementia that care givers are trying to get away from.

Some families worry about their relatives being laughed at when they engage in doll therapy, Mitchell says. He had the same concerns when he worked at a senior residential center. But when one resident requested that he allow her to continue caring for a doll, he saw the positive impact of the therapy. Mitchell says doll therapy should be used cautiously and more studies are needed.

At Sunrise Beverly Hills, the nursery is set up like a baby's room. A stuffed bear rests inside the wooden crib. On a shelf above are framed photos of Guzofsky and a few other women who regularly interact with the dolls. A few bottles, a Dr. Seuss book and diapers sit on a nearby changing table.

The nursery is just one of several areas designed to engage residents, says Rita Altman, senior vice president of memory care for Sunrise, which has facilities in the U.S., Canada and the United Kingdom. There are also art centers, offices, gardens and kitchens where residents may find familiar objects from their past.

Altman says the nurseries tend to attract residents who have an instinct to care for babies. Some people may not be able to talk anymore, but still find a sense of security with a doll, she says. "You can read it in their body language when they pick up the doll." 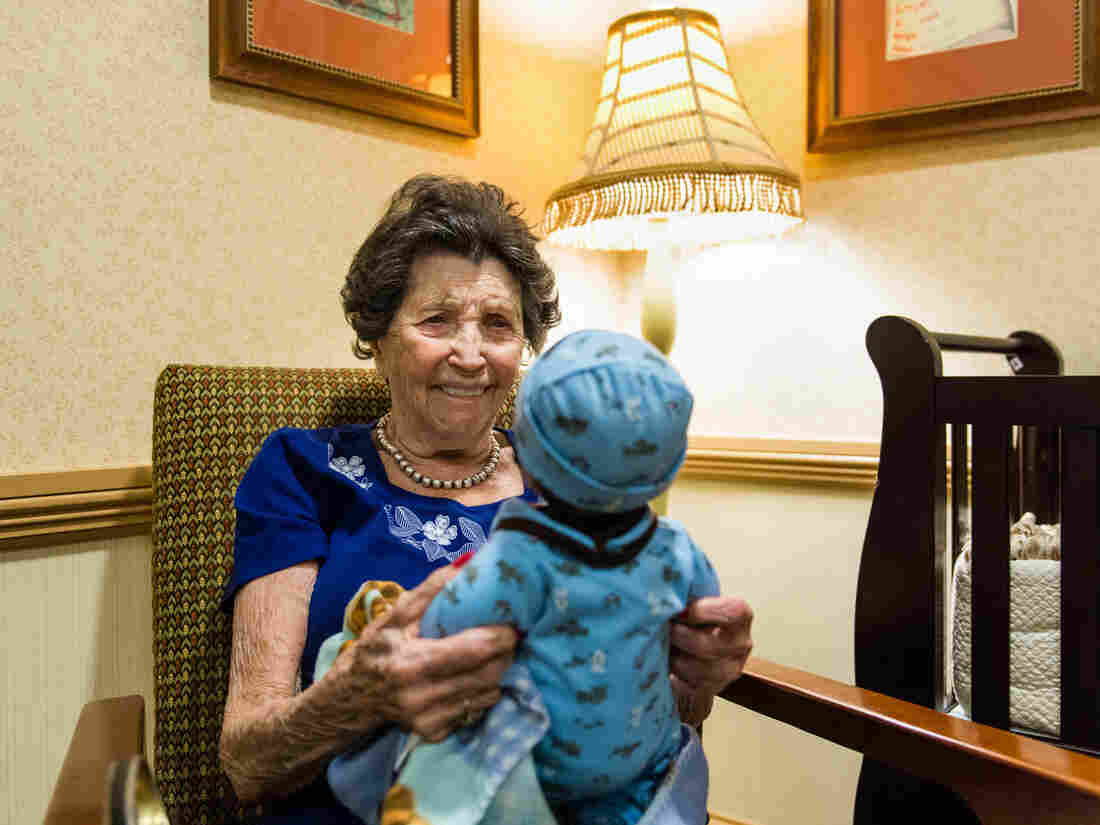 When asked what she likes about the dolls, Guzofsky says, "I love babies." Heidi de Marco/Kaiser Health News hide caption

Sunrise caregivers also use the dolls to spark conversations by asking questions: How many children do you have? Was your first baby a boy or a girl? What are the best things about being a mom?

The executive director of the Beverly Hills facility, Jason Malone, says he was skeptical about the use of dolls when he first heard about them.

"I almost felt like we were being deceitful," he says. "It didn't feel like it was real."

But he quickly changed his mind when he realized that staff could use the dolls respectfully.

"We don't want to confuse treating our seniors as children," Malone says. "That's not what this activity is truly about."

Guzofsky began caring for the dolls soon after moving into the facility. When asked what she likes about them, she says, "I love babies. I have some very nice ones back where I live now."

Guzofsky's daughter, Carol Mizel, says her mom raised three children and volunteered extensively in Colorado and Mexico before being diagnosed with Alzheimer's about five years ago. Mizel doesn't see any downside to her mother caring for the dolls.

It is a "creative way of dealing with her where she is now," she says.

For some residents, including 87-year-old Marilou Roos, holding the dolls is one of the only times they interact with the staff. Roos uses a wheelchair and rarely speaks. She sleeps much of the day.

"There is not much [Marilou] can participate in," says Vladimir Kaplun, former coordinator of the secure memory floor. "When she spends some time with the babies, she wakes up and she brightens up."

On a recent day, caregiver Jessica Butler sits next to Roos, who holds a doll against her chest and pats her on the back. She kisses the doll twice.

Caring for the dolls is second nature to Roos, who made a career of being a mom to five children, according to her daughter, Ellen Swarts.

It's been difficult for Swarts to watch the decline of her mother, who hasn't called her by name in over a year. Watching her with the dolls helps, Swarts says.

"To see the light in her eyes when she has a baby in her arms, I don't care if it's real or if it's pretending," she said. "If that gives her comfort, I am a-OK with it."