Accessibility links
Medicare Encourages People To Try Dialysis At Home : Shots - Health News Nationwide, fewer than 10 percent of people who need kidney dialysis do it at home. But close to 40 percent of patients of a Montana doctor do it at home. Medicare is hoping that becomes a trend. 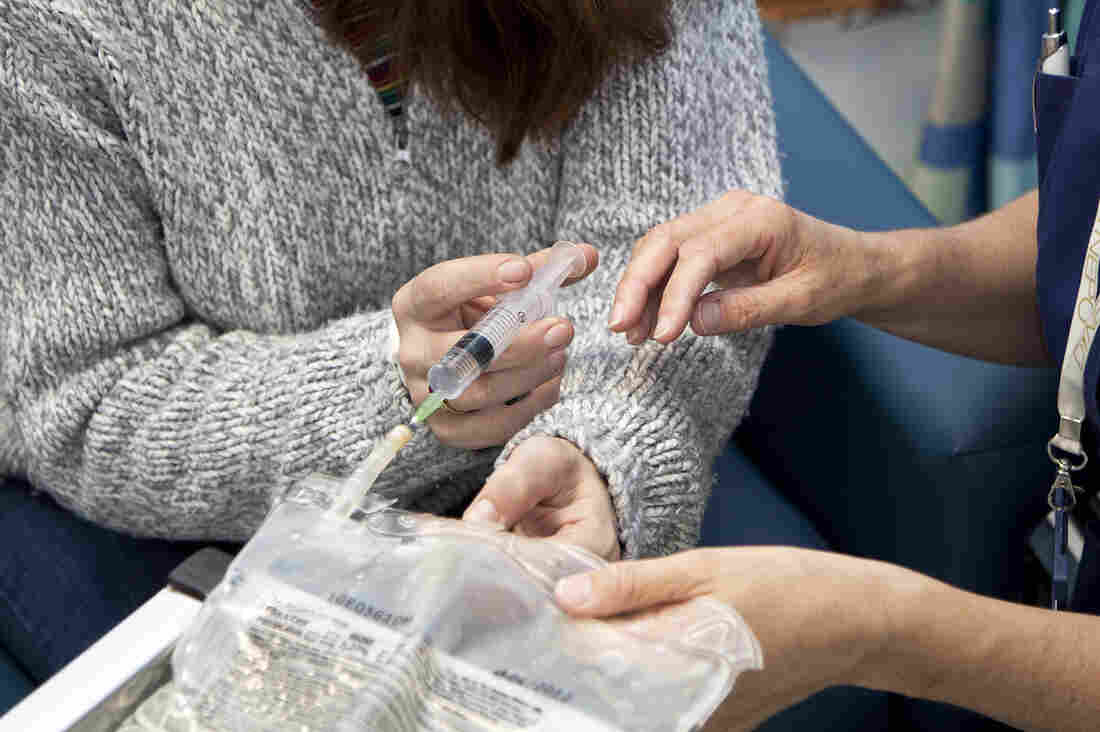 Nurses teach patients how to use equipment and do peritoneal dialysis at home. Life in View/Science Source hide caption 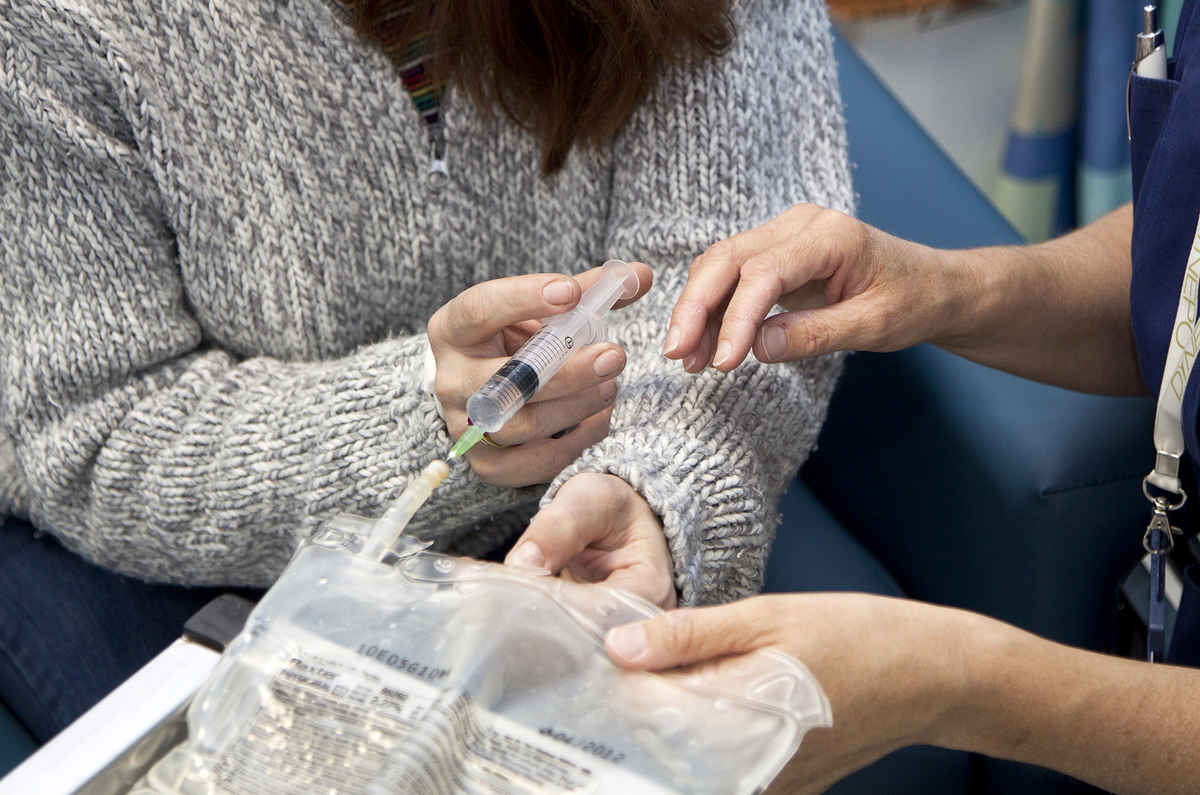 Nurses teach patients how to use equipment and do peritoneal dialysis at home.

About half a million Americans need dialysis, which cleans toxins from the body when the kidneys can't anymore. It can cost more than $50,000 a year, and takes hours each week at a dialysis center.

To meet the need, roughly 7,000 kidney dialysis centers have opened across the country. Patients go several times a week and spend half a day undergoing the life-sustaining procedure. Medicare is now taking steps to make it easier for people to do their own dialysis at home.

That sounds like great news to Dr. Robert LaClair, a nephrologist in Helena, Mont., who has an unusually high percentage of patients who do their dialysis at home: 40 percent versus the national rate of about 10 percent. That's largely because LaClair is no fan of how dialysis has traditionally been done in America. He says his patients do better if they're more active participants in their care, rather than passive receivers.

"The way we do dialysis in this country, no one would be saying, 'This is the way we should be doing things,' " LaClair says.

The traditional dialysis routine in a clinic setting is tough on patients, he says. "Often our patients will feel poorly for four, five, six hours, sometimes the rest of the day after a dialysis treatment [in the center]," LaClair says. "They only start feeling better by the next day. And then of course by the time they feel really well, they're back on dialysis again. So it's very hard on people, especially as they get older, to have to go through that kind of treatment."

Contrast that to LaClair's patient, 84-year-old Ward Shanahan. He's a retired attorney who was diagnosed with diabetes a year ago. LeClair prescribed a home dialysis machine that Shanahan uses every night at bedtime. More frequent dialysis means less recovery time, and patients can do it when it's convenient for them, not when centers have appointments available.

"It gives me a life again," Shanahan says.

He has a lakeside cabin he likes to visit in the summer. Being tied to a dialysis center's daytime hours "busts up the week," he says. "I like to be able to get up in the morning, take a shower and go around the world."

Shanahan says his home routine, using something called a peritoneal dialysis machine, isn't particularly difficult. "It's got this sweet-voiced lady telling me what to do," he says about the prerecorded voice from the machine on his nightstand that talks him through properly connecting several slender, clear plastic tubes to it. One plugs into a pre-mixed bag of sugar solution, another to a permanent catheter near his navel. The machine slowly pumps the fluid into his lower abdomen, where it circulates and absorbs bodily wastes through blood vessels in the abdominal lining called the peritoneum. The machine then draws it back out through the same catheter. Another tube snaking away from his machine carries the waste fluids into a toilet in the adjacent bathroom. 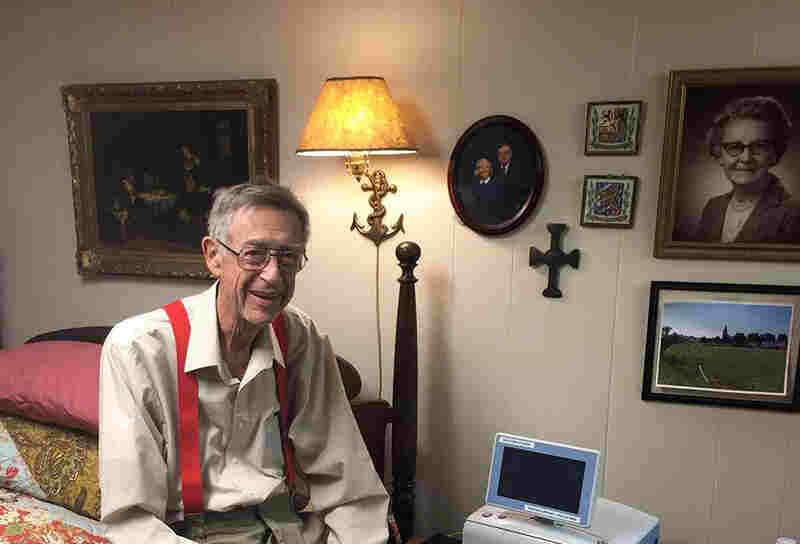 Ward Shanahan, 84, does dialysis at home every night while he sleeps. Eric Whitney/MTPR hide caption 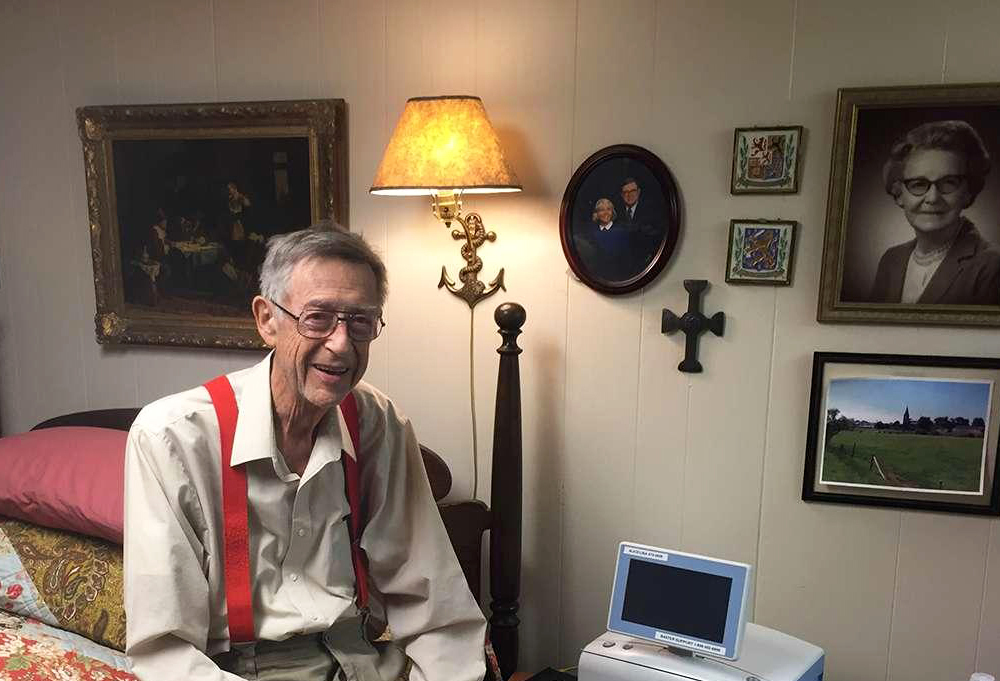 Ward Shanahan, 84, does dialysis at home every night while he sleeps.

Peritoneal dialysis is less common than hemodialysis, in which a machine filters the blood itself. Most people who dialyze at home use the peritoneal technique, although it is possible for some patients to perform hemodialysis at home, too.

Shanahan says he often sleeps through most of the fluid cycling, getting about six hours of sleep a night. If there's a problem, he says, his machine, which is about the size of a toaster oven, "has a squawker on it, so I could be sleeping and this thing wakes me up and tells me I've got to fix the line."

But the routine he's now familiar with requires a lot of up-front training. Medicare is proposing to more than double the payment it offers dialysis providers to teach patients how to do it--from the current $50.16 for 1.5 hours of a nurse's time, to $95.57 for 2.66 hours.

Still, that may not be enough to cover actual training costs, says Dr. Frank Maddux, chief medical officer for Fresenius, a large dialysis company. He says the number of Fresenius' patients who dialyze at home has increased from 7 to 11 percent over the last five years.

"I don't know that [the increased payment] will create all the fundamental changes that need to occur, but I think it sets a good, clear direction," Maddux says.

Neither Medicare nor Maddux will say how many more dialysis patients should do the procedure at home. They say that is both a personal and medical choice that isn't right for everyone, and they don't want patients who are happy using dialysis centers to feel pressure to change.

Medicare officials declined to be interviewed for this story, but Maddux says he sees the agency's proposed bump in payment for in-home dialysis training as part of its bigger "triple aim" goal of improving patients' experience while also improving their health and lowering medical costs.

"There are many patients I think that could be much more engaged in their therapy," Maddux says, which he thinks would likely lead to them feeling better. At least one study found that patients who dialyze more frequently feel better and are hospitalized less than those who do it less frequently.

Nephrologist LaClair practices at St. Peter's Hospital in Helena, Mont. He says his patients who switch from the largely passive experience of a center to taking responsibility for their own care at home never want to go back, "even when we've had people having significant problems and issues" doing it themselves.

At St. Pete's, LaClair says, they have had the opportunity to "model dialysis the way think we would want dialysis if we were sick, and that's what we do."

Neither LaClair nor Maddux sees home dialysis as a threat to the viability of the thousands of dialysis centers nationwide. Providers get the same base-level payments for caring for patients whether they do their dialysis at home or in centers. LaClair says maintaining patients on in-home dialysis is cheaper long term, but requires a significant investment up front in training, and he says it's crucial that there is always medical staff on call to help with challenges, including infection control.

Information technology is improving the viability of home dialysis, too. Patients used to have to keep pen-and-paper logs of important health data about their treatments, logs that nurses say were notoriously inaccurate and that they only saw once a month. New machines track patients vital signs in real time and send the data back to providers via the Internet, allowing them to track and even adjust treatments on their computers or smart phones on the fly.

Medicare hopes to implement the payment increase by January 1, 2017.