Accessibility links
Home Remedies That Help Relieve The Misery Of Morning Sickness : Shots - Health News Almost all women experience morning sickness during pregnancy, but it's hard to figure out what might work when you're busy retching. A review of evidence finds that ginger and acupressure bands help. 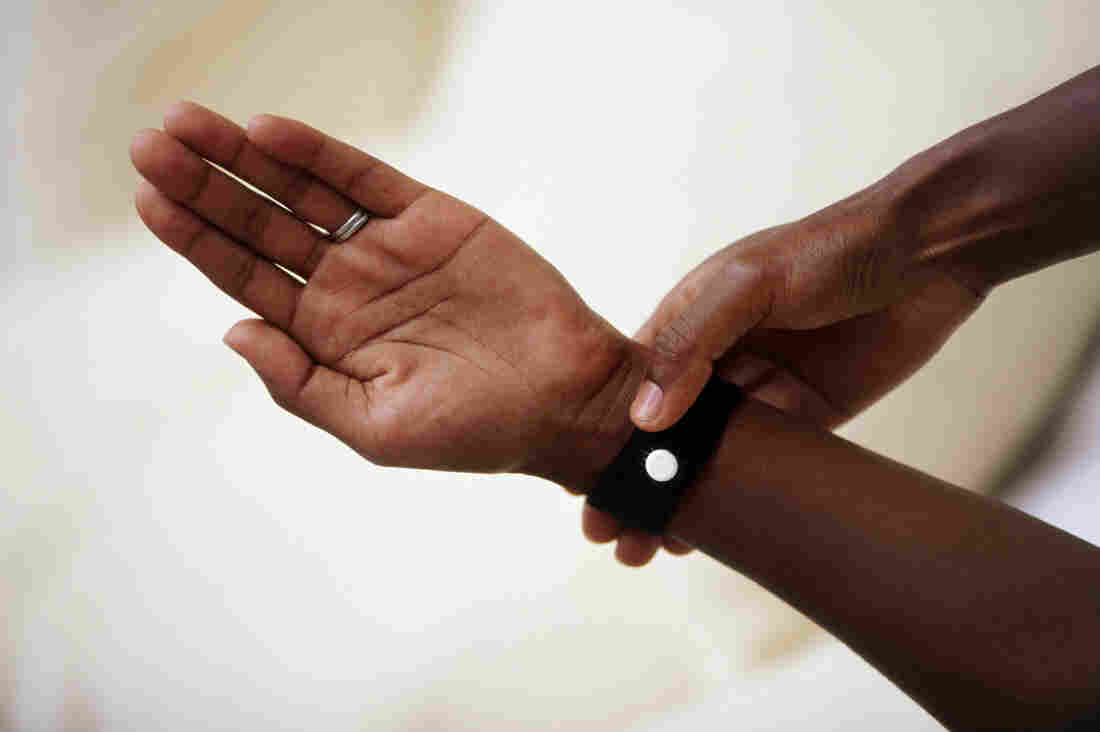 Those acupressure wristbands might not help for seasickness, but they could help for morning sickness. Ruth Jenkinson/Dorling Kindersley/Getty Images hide caption 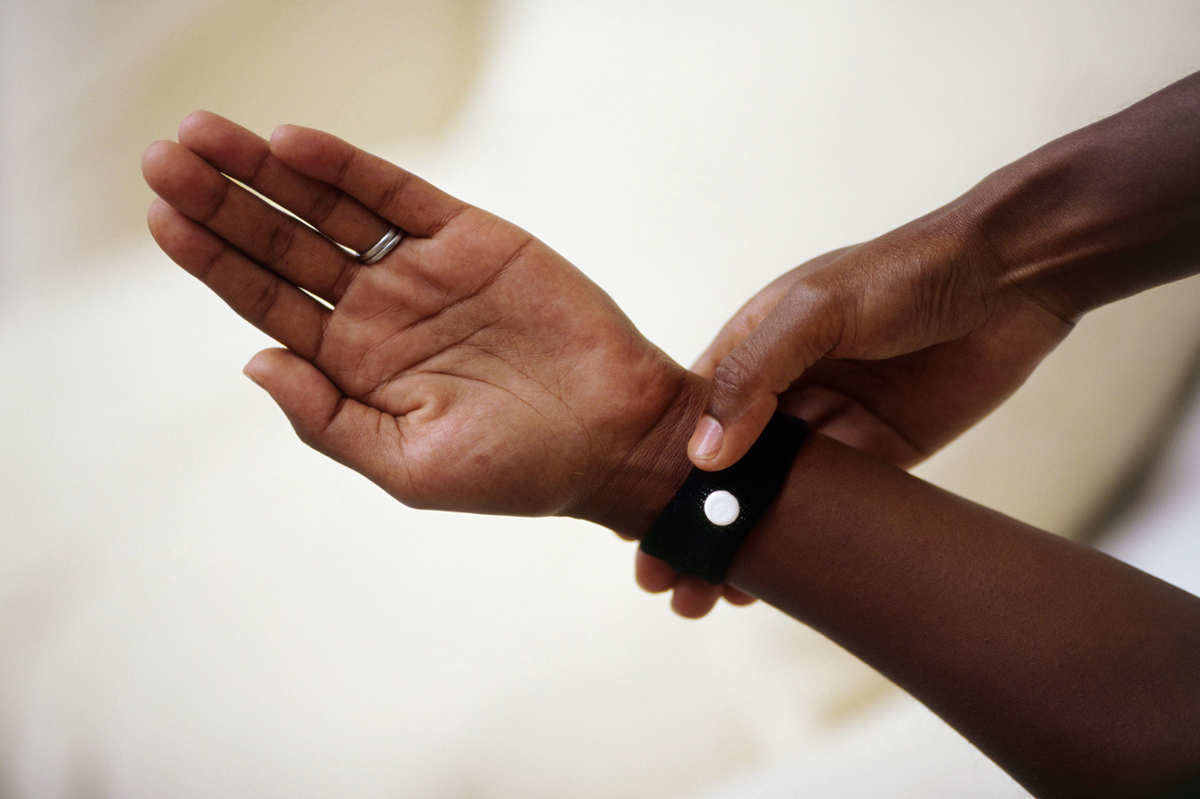 Those acupressure wristbands might not help for seasickness, but they could help for morning sickness.

Morning sickness is a fact of life, or at least a fact of pregnancy, with more than three quarters of women enduring nausea or vomiting. There are tons of remedies touted, from ginger to acupuncture. But it can be hard to figure out what works.

And science isn't helping women much. When researchers combed through more than 13,000 studies that addressed morning sickness, they found that just 35 were robust enough to be relied upon. It's not surprising that there's no magic cure-all, especially since any treatment needs to be safe for the mother and the baby. But a few things stood out, especially when it comes to simple remedies for mild to moderate morning sickness. Here's the scoop on treatments you can try at home:

Ginger: Ginger enthusiasts rejoice! One of the oldest anti-nausea tricks in the book seems to work, at least a little bit. Four studies found that ginger was better at relieving morning sickness symptoms than a placebo.

Vitamin B6 (pyridoxine): One study found that vitamin B6 could help with nausea, but that it didn't reduce vomiting any more than a placebo. Another study found that higher doses of vitamin B6 helped reduce symptoms of morning sickness better than lower doses.

Acupressure: You know those wristbands people sometimes wear before going on a boat? They're supposed to put pressure on a certain spot on your wrist and help prevent seasickness. They jury's still out on whether acupressure can cure nautical nausea, but one study found that acupressure bands might help a bit with morning sickness. Others were inconclusive. Acupuncture and electrical nerve stimulation, however, failed to stand up to the jury of clinical trials.

Antihistamines: Some over-the-counter and prescription allergy medications seem to help with morning sickness. Although they are considered safe, they do have side effects like drowsiness and headache, so they're recommended as a second-tier offense. The combination of doxylamine (sold under the brand name Unisom) and vitamin B6 also helped.

What works best? A few studies directly compared the effectiveness of morning sickness treatments. Four compared ginger to Vitamin B6 and found that ginger was just as good, and in one case better, at reducing nausea. Another found that ginger, either in capsules or as syrup, worked better than the motion-sickness bands. And ginger is side-effect free, if you don't count ginger burps or acid reflux. So ginger for the win!

Unfortunately, none of these treatments have instant results.

"The evidence suggests that if these measures are going to be effective, they'll start to help within three to four days," says Amy O'Donnell, a public health researcher and fellow at the National Institute of Health Research School for Primary Care at Newcastle University in Newcastle, U.K., who was an author of the study.

She emphasized that if one at-home treatment doesn't help, women should try something else and consult their doctors.

The study, which was published Tuesday in JAMA, the journal of the American Medical Association, also looked at prescription drugs for moderate and severe morning sickness. The review wasn't conclusive, but it showed that some drugs are effective, including antihistamines and medications that block serotonin and dopamine receptors.

There are other steps women can and should take at the first sign of nausea, says Dr. Laura Sirott, who was not involved in the study. Sirott is a practicing OB-GYN and the California chairman at the American Congress of Obstetricians and Gynecologists.

Dietary changes can help, she says, like eating smaller meals more often, or avoiding foods that are spicy and have strong odors. Some women find eating something solid, like crackers, before having any liquids can help control nausea.

And using simple remedies to control early symptoms of morning sickness can help avoid more severe problems down the line, Sirott says. Vomiting can lead to severe dehydration which can cause more problems, so being proactive can be a big help.

Sirott says the remedies described in the review have worked for some of her patients.

"The evidence isn't great for some of these treatments, but they're really low-risk. If it's not going to hurt, why not try it?" Sirott says. It's hard to evaluate the effectiveness of morning sickness treatments, she says, because morning sickness naturally improves as pregnancy progresses. "Some of these treatments might just be placebos, but if women say they work, that's what matters."

Given the poor quality of many of the studies on morning sickness, it might be a while before scientists can weed placebo from good practice.

"We need appropriately designed, multicenter clinical trials to compare the effectiveness of different treatments at different severities," says O'Donnell. And they need to take into account the outcomes that matter to women, like "improved quality of life and side effects."

While we wait for better research to come in, Sirott likes to remind her patients that morning sickness can be a good thing. "It's a normal part of pregnancy, and it usually means the pregnancy is going well. But that doesn't mean not getting sick is a bad thing, either."

The original version of this story incorrectly referred to Dr. Laura Sirott as the California chairman of the American Congress of Obstetricians and Gynecologists. She is the vice chairman for California.