Accessibility links
Public Health Labs Hope Federal Funds Will Speed Zika Test Results : Shots - Health News But they'll have to wait a while. The portion of the $394 million Congress allocated to help pregnant women find out more quickly if they have Zika isn't expected to get to strained labs until 2017. 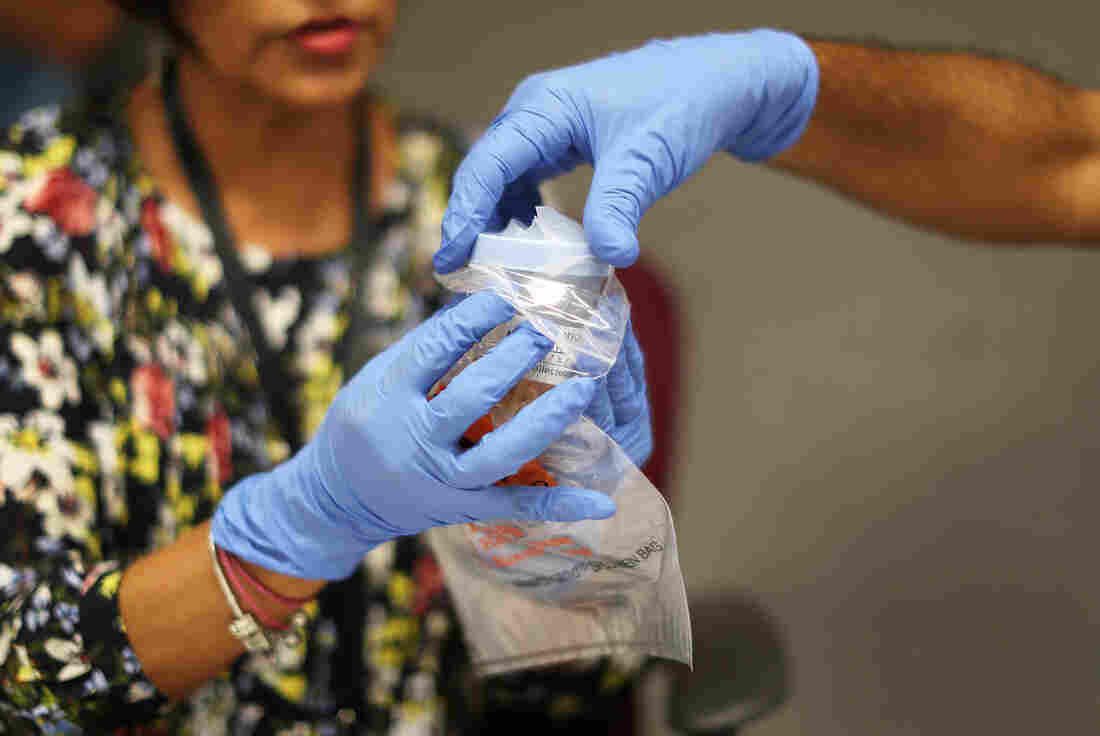 Florida Department of Health workers at a temporary clinic set up in Miami Beach in September package up a urine sample to be tested for the Zika virus. Pregnant women in Texas and Florida have complained it can take as long as a month or more to get their Zika test results. Joe Raedle/Getty Images hide caption 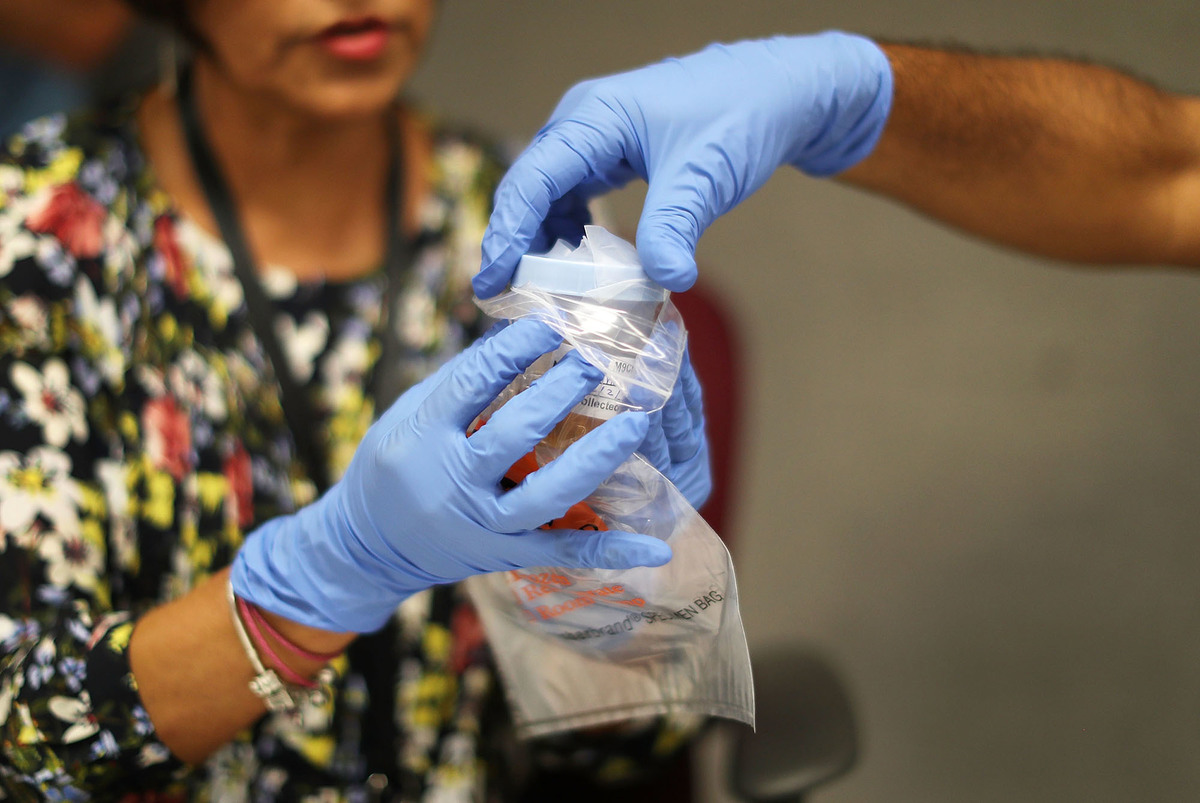 Florida Department of Health workers at a temporary clinic set up in Miami Beach in September package up a urine sample to be tested for the Zika virus. Pregnant women in Texas and Florida have complained it can take as long as a month or more to get their Zika test results.

But despite best efforts, there's a problem, says Legacy's chief medical officer, Dr. Ann Barnes. Pregnant women (and, often, their sexual partners) who get tested for Zika frequently have to wait as long as a month to know if they are indeed infected, and the pregnancy is at risk. That's the turnaround time from the state public health lab, where blood samples are sent for testing.

"In that situation, the anxiety a pregnant woman has to live with is great," Barnes says. "Ideally, we'd be able to speed up the process."

It's not just an issue in Houston. Florida radio reporter Sammy Mack, of WLRN, got tested for the Zika virus in August after realizing she had been in the suspected transmission zone in Miami while pregnant. The testing was free, she explained, in a recent Shots post, but more than four weeks later, she was still waiting to learn the results.

In all areas where Zika poses a threat, public health departments are struggling to meet the need to test patients for the mosquito-borne virus — even if the government has classified the patient as being "at risk" of facing serious complications, particularly with regard to pregnancy.

Doctors and infectious disease specialists say last month's approval by the U.S. Congress of $1.1 billion in emergency funding to fight the virus could help these women, by giving local labs the resources to efficiently determine if people have been infected.

Federal health officials this week gave a rough outline of how this funding will be distributed.

Specifically, Congress directed $394 million to the Centers for Disease Control and Prevention.The bulk of that funding will go to supporting state and local Zika response efforts — such as mosquito control and emergency response teams and public education campaigns — as well as to efforts to improve diagnostic tests, and research to track how the virus affects children long-term. The federal funds also include money for expanding lab capacity, though it is still unclear exactly how much.

The U.S. Department of Health and Human Services, which includes the CDC, has until the end of October to craft a spending plan.

"These funds will hopefully allow the infrastructure for testing to be expanded," says Andrew Pekosz, a professor of microbiology at Johns Hopkins University's Bloomberg School of Public Health.

Zika is already spreading in Florida. The CDC has recommended that pregnant women in particular get tested, since the virus can cause birth defects and other complications. About 80 percent of infected people don't show symptoms, so a test is the only way to know if they have contracted Zika.

"Especially for a pregnant woman, getting an answer quickly is a big deal," says Dr. Jesse Goodman, a professor of medicine and infectious diseases at Georgetown University Medical Center in Washington, D.C. "You're going to be very concerned. If that concern can be reduced, that's going to be good for you."

But the additional federal funding will not be an immediate fix.

Given how long processing and budgeting can take, public health labs aren't expecting the cash infusion until early 2017, said Peter Kyriacopoulos, senior director of public policy at the Association of Public Health Laboratories.

While the congressional funding is a promising start, more investment is necessary, said Chris Gould, senior director for federal government relations at the Association of State and Territorial Health Officials. Local health departments have been shrinking over the past six years, he says, and many don't have staffs large enough to operate laboratories at the level needed, given the volume of samples coming in.

These local health departments need to expand manpower, Gould says, especially since testing for Zika isn't their only responsibility.

Kyriacopoulos estimates that labs would need about $39 million to adequately meet the challenges. And public health officials expect the virus to return next summer, he points out, which could create a need for further funding down the line.

Meanwhile, the CDC has already tried to alleviate some of the strain on these laboratories. Last month, it purchased $2.5 million worth of diagnostic supplies for states that offer Zika testing. And laboratories have been working on their own to try to expand capacity — especially labs that serve regions such as Florida, Texas and California, where the warmer, mosquito-friendly climate heightens the risk that Zika could spread.

The burden doesn't fall evenly, Rac notes. In urban centers such as Houston, women who may have been infected are more likely to get a Zika test than are women from a poorer, rural town in south Texas. Public health clinics or lab systems in rural areas may not be as well-resourced, so women have fewer options.

Predicting future need is also tricky. States have been encouraging pregnant women to get tested, along with men who may have been exposed and are showing the virus' flu-like symptoms. But that leaves out other groups — such as asymptomatic men who may have contracted Zika and could pass it on to female partners. If states start to push for that testing as well, it could exacerbate the strain on the labs.

Plus, it's difficult to gauge whether demand will dip in the coming months. Technically, mosquito season peaks in the summer. But in high-risk states like Florida or Texas, the insects carrying Zika can persist into December and even January, says Dr. Umair Shah, executive director of the public health department in Texas' Harris County, which encompasses Houston.

Beyond expanding the nation's capacity to test for Zika, HHS is also planning to invest some of its new funding into developing better tests to detect the virus. Currently, labs use one test that can find the virus within two weeks of exposure, and another that can detect it for up to three months. But the second test — which is more commonly used — is less precise and can, for instance, turn up false positives if someone's been exposed to other, similar diseases.

The investment in improving and then testing some better diagnostics is crucial, Rac says, especially given the magnitude of threat Zika still poses.

"There's still a lot we need to know we need to figure out," she says. "And who knows what's going to happen? ... This mosquito's pretty resilient to destruction. This is something we're going to see for some time."