Accessibility links
Colorado Ponders Ethics Of Vote To Legalize Aid In Dying : Shots - Health News Colorado is the latest state to consider legalizing aid in dying. Residents find themselves struggling with whether assisted death is an act of mercy or a moral slippery slope. 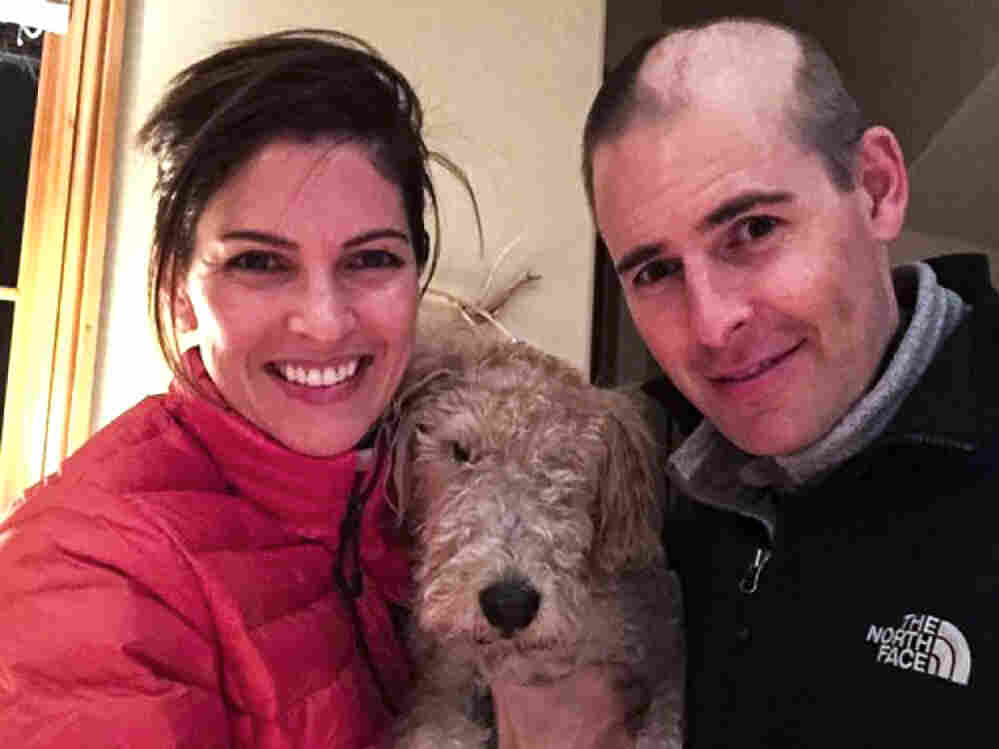 Matt Larson, shortly after his brain surgery, with his wife, Kelly. Larson says he would like the option to end his life rather than face a painful death. Courtesy of Matt Larson hide caption 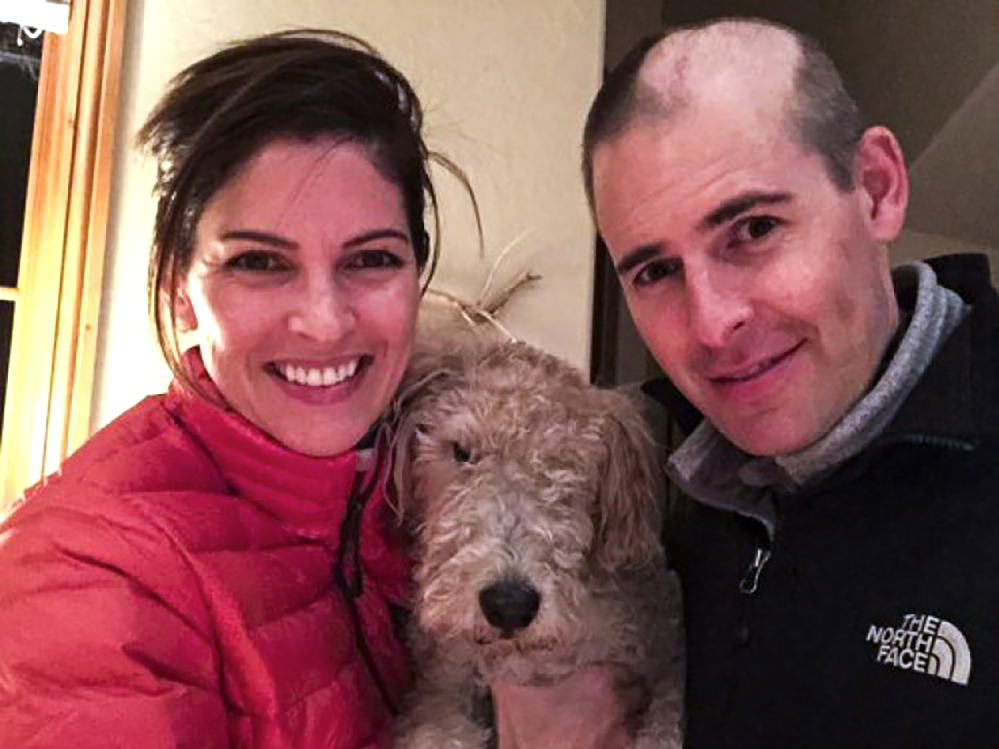 Matt Larson, shortly after his brain surgery, with his wife, Kelly. Larson says he would like the option to end his life rather than face a painful death.

"One day I was fine," says Larson. "The next I was being rushed by ambulance to Denver Health following two very massive and violent seizures."

The force of the seizures, from the sheer shaking, fractured and dislocated his shoulders and snapped two bones in his back. Soon his providers had life-altering test results.

"They came back and shut the door and said 'you have mass on your brain,' which was tough to hear," says Larson.

The diagnosis, a malignant brain tumor called an anaplastic oligodendroglioma, rocked his world. Larson, 36, and his girlfriend, Kelly, decided to get married. He says a couple of days later, surgeons cracked open his skull and scooped out part of his brain. Since then he's endured the tough road of radiation and chemo, with a sobering outlook.

"I have a 50/50 probability that I'm going to live," says Larson. "I hope to beat the odds. I desperately want to live."

But Larson has decided that if the brain cancer returns and is incurable, he'd like the option to end his life rather than face the possibility of an agonizing and painful death.

"It would just bring me a ton of peace and comfort now to know that I have this option," Larson says.

He's become an advocate for Colorado's Proposition 106. It would give mentally competent adults the ability to end their lives with a doctor-prescribed drug, generally a sleeping medication called secobarbital.

"We need to help people diminish and assuage their suffering any way we can," says Dr. David Grube, a family doctor in Oregon, one of five states to allow the practice.

Despite Sweeping Aid-In-Dying Law, Few Will Have That Option

Grube, who retired after practicing for 38 years, is also the national medical director for the group Compassion & Choices. He became a proponent of what he calls "death with dignity" shortly before the law passed in Oregon in 1994. He was moved to the position after one of his patients, who was dying from bladder cancer, shot himself to death.

"If I can ever prevent such a violent and tragic end to a person's life, I should be open to helping people," Grube says.

Five states currently allow the practice: Washington, Oregon, California and Vermont; and Montana has effectively legalized it, due to a court ruling that protects doctors who help dying patients from prosecution.

Colorado's proposal is modeled after Oregon's law. In both, two doctors must determine a patient is mentally capable of making the choice and isn't under undue influence or coercion. Grube says he has helped about 30 people end their lives, with about a third of those who requested medications deciding not to take them.

"Many more people just want to talk about it, just want to know if it's a possible option," says Grube. "Still, in all, it's quite uncommon."

According to the Oregon Public Health Division, during 2015, 218 people received prescriptions for lethal medications under the provisions of the state's Death with Dignity Act. That was up from 155 the prior year. The division has received reports of 132 people who died in 2015 from taking the medications prescribed under the act, a rate of 38.6 per 10,000 patients.

More than 90 percent of those patients died at home and were enrolled in hospice care. Since the Oregon law was passed, 1,545 people have received legal prescriptions; 991 patients died after ingesting the medications.

When patients were asked why they decided to consider ending their lives, the most common concerns were that they were less able to engage in activities that make life enjoyable, and that they were losing both autonomy and dignity. Further down the list were inadequate pain control and the financial impact of the treatment.

But Denver physician Alan Rastrelli opposes the proposal. He worries it will erode the public's trust in doctors as healers.

"Physicians will go towards this philosophy of assisting a patient in their death," he says. "That will destroy, I think, the patient and physician relationship." 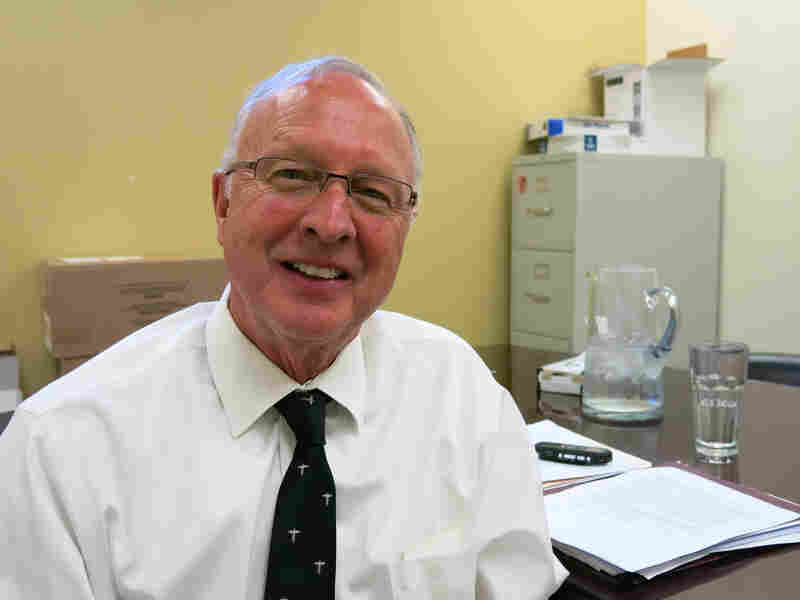 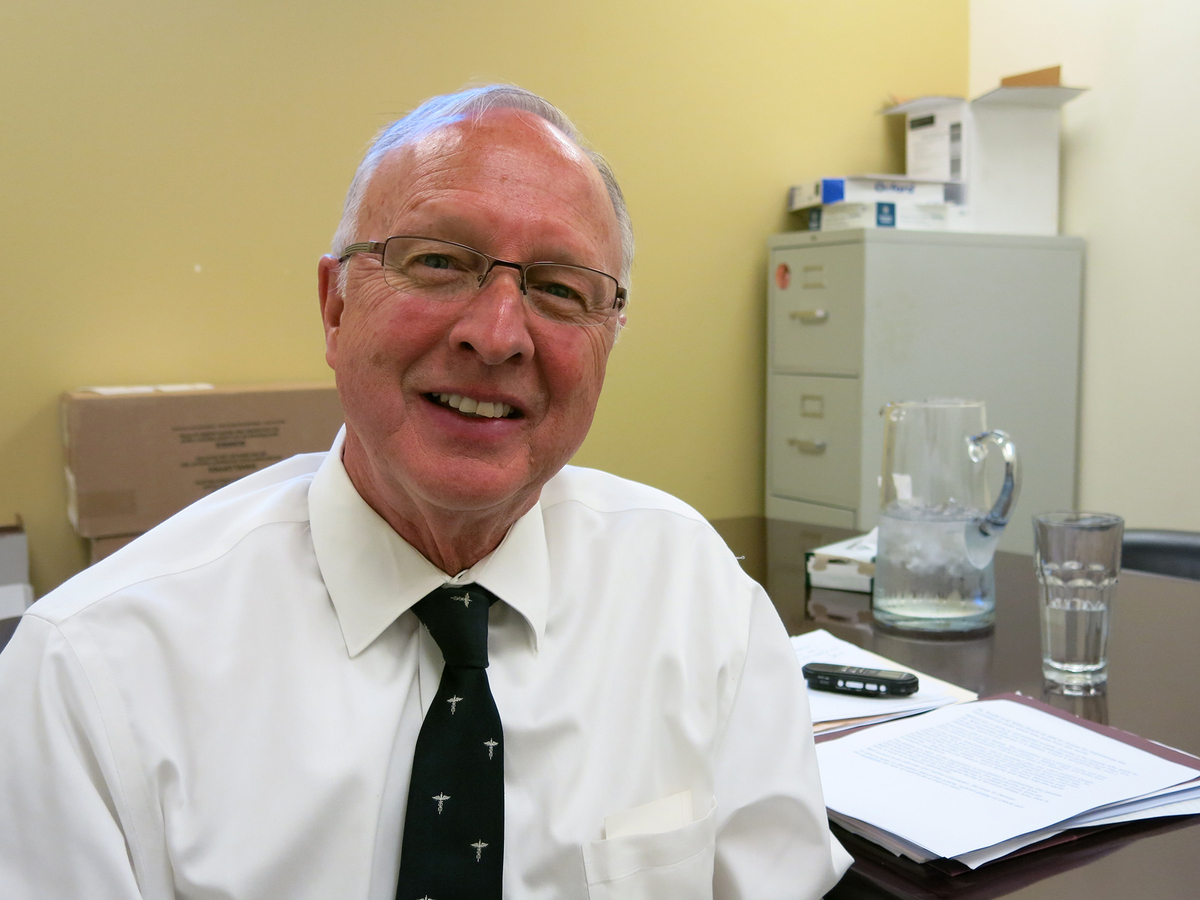 Rastrelli, who practiced anesthesiology for 28 years, transitioned into hospice and palliative medicine 15 years ago. He says when doctors help patients end their lives, it creates a societal and bioethical calamity.

Rastrelli worries about what the initiative doesn't do, such as require a physician to be present when the person dies. He also said it's difficult to know about common problems or mistakes because reporting requirements in Oregon, and in Colorado's proposal, are weak.

He advocates helping dying patients to use pain relievers and receive spiritual and psychological support to ease suffering.

"Woody Allen said, 'I'm not afraid of dying, I just don't want to be there when it happens,' " Rastrelli says. "We can help people be OK all the way through to the end."

That makes a lot of sense to advocates with Not Dead Yet, a national group run by people with disabilities that opposes the proposal.

Anita Cameron, one of the group's board members, says doctors "are humans and they make mistakes." 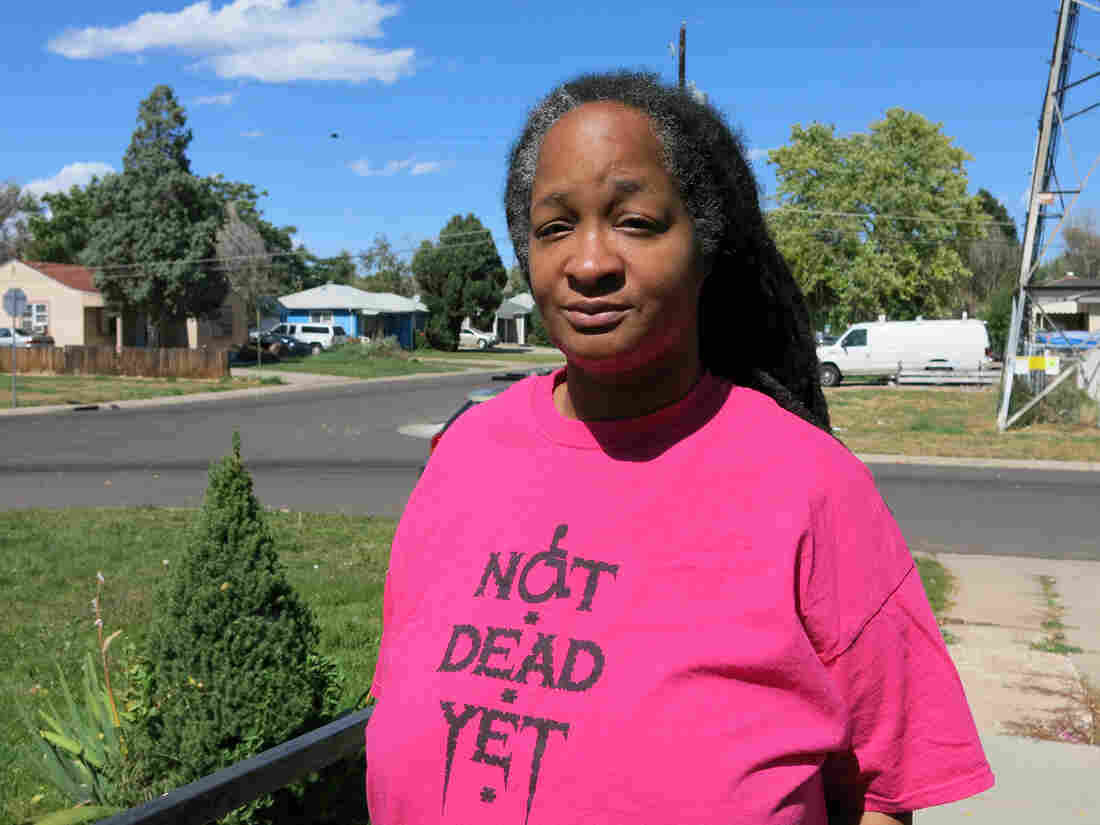 Anita Cameron, a board member of the group "Not Dead Yet," opposes Proposition 106. John Daley/CPR hide caption 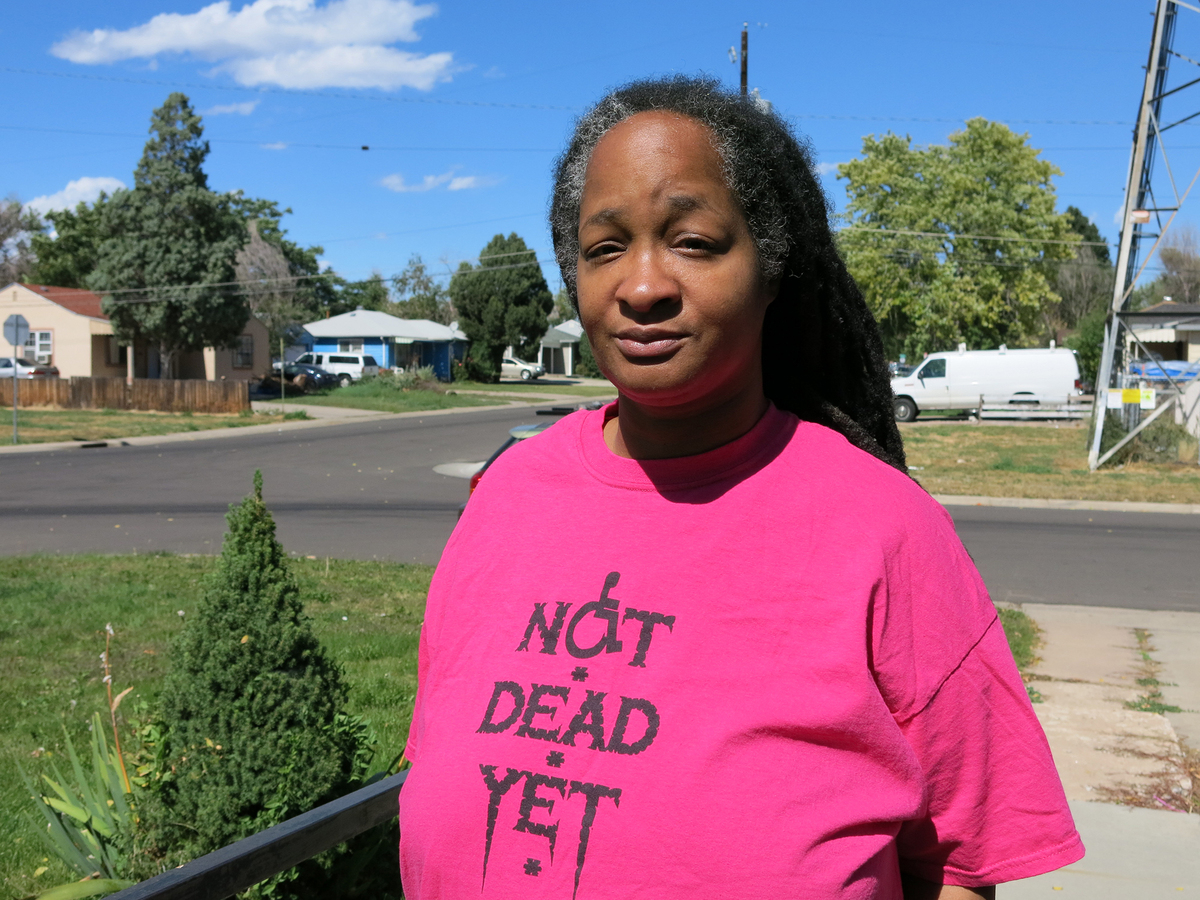 Anita Cameron, a board member of the group "Not Dead Yet," opposes Proposition 106.

Cameron's mother, Alice, was diagnosed with end-stage chronic lung disease seven years ago. She was given less than six months to live. Today, Cameron's mother is still alive.

"Had the law been in place, I'm pretty sure those doctors would have convinced my mom to take the pills," Cameron said. "And she'd be dead."

Cameron has several disabilities, including multiple sclerosis. She worries that the ballot proposal will encourage people with disabilities to kill themselves. She also thinks that in some cases, insurers will agree to pay for end-of-life medications, but not for measures to keep someone alive.

The ballot initiative is drawing passion — and plenty of money.

According to the latest filings with the Colorado Secretary of State's office, backers have raised about $5.3 million, mostly from Compassion & Choices Action Network.

The "No Assisted Suicide Colorado" campaign has raised $1.8 million. That money is primarily coming from the Roman Catholic Archdiocese of Denver, which has donated $1.1 million, as well as other archdioceses around the country.

The board of the Colorado Medical Society, the state's largest physician group, voted to take a neutral position on the measure. President-elect Dr. Katie Lozano calls the proposal "the most personal of decisions that must be left to our patients" to decide.

Increasing The Odds That End-Of-Life Wishes Are Honored

A February poll of 618 Colorado physicians before the ballot measure was proposed found support within the group for physician-assisted death in general. Fifty-six percent of medical society members favored it; 35 percent opposed.

Among those who frequently treat patients in later stages of a terminal illness, the gap was smaller, with 50 percent backing physician-assisted death and 41 percent opposing it.

The medical society said there was a consensus that if the law were to pass, the medical society should focus on protecting patients and doctors, and increase awareness of end-of-life choices, emphasizing the importance of palliative and hospice care.

Election ballots will start being mailed next week.