Accessibility links
Skeptics Question The Value Of Hydration Therapy For The Healthy : Shots - Health News Some spa-like clinics will inject an expensive mix of water and vitamins into your bloodstream, ostensibly to ward off illness and boost energy. But can't drinking fluids offer the same benefit? 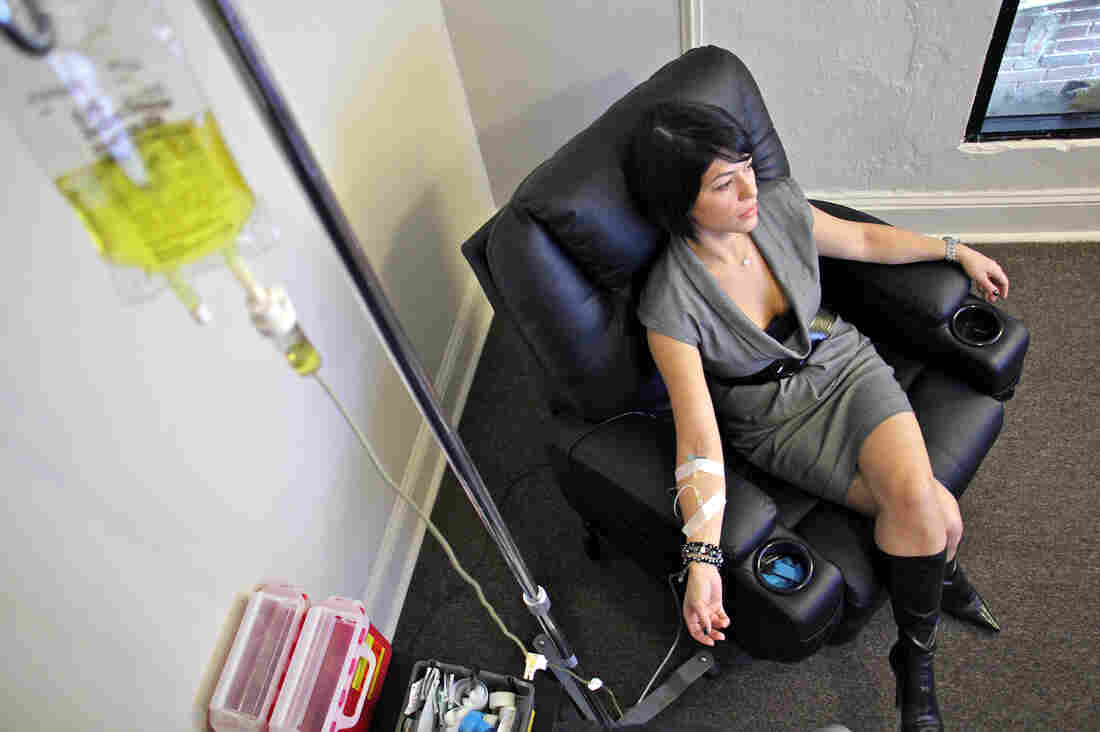 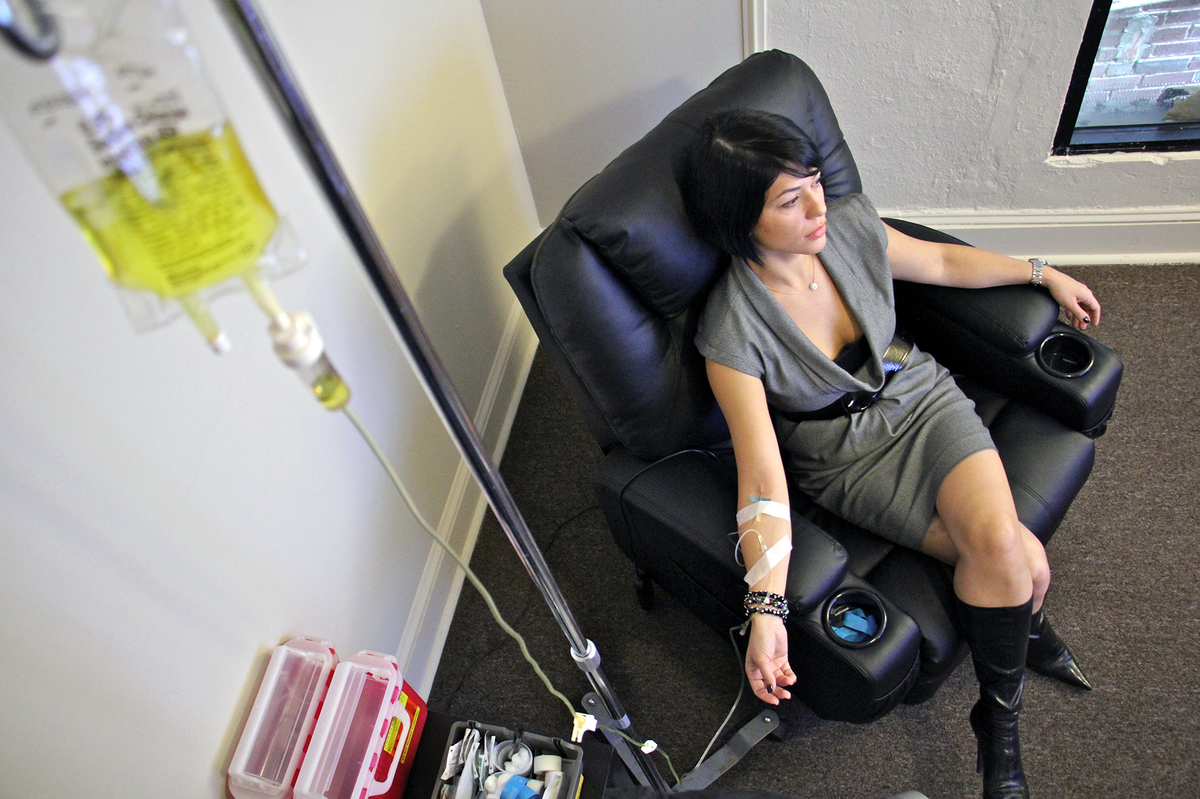 Yana Shapiro relaxes while taking an intravenous vitamin treatment at RestoreIV in Philadelphia.

Yana Shapiro is a partner at a Philadelphia law firm with an exhausting travel schedule and two boys, ages 9 and 4. When she feels run-down from juggling everything and feels a cold coming on, she books an appointment for an intravenous infusion of water, vitamins and minerals.

"Anything to avoid antibiotics or being out of commission," the 37-year-old says.

After getting a 100-milliliter drip of a liquid the clinic calls immune protection pumped directly into her bloodstream via a needle in her arm, Shapiro says she feels like "a new person." The infusion, which costs $179, takes less than a half-hour. While she waits, she can recline in one of the cushy seats, watch the 64-inch, flat-screen TV or dim the lights in the room.

"I take this time as 'me time' — to relax and kick back and close my eyes for a couple of minutes," she says.

But if you mostly eat your kale and quinoa, why would you need a boost of vitamins delivered straight to a vein? Skeptical physicians say you probably don't need it. A healthy gut absorbs all the nutrients we need from food. And anyone well enough to drink fluid, they say, can get all the rehydration they need by mouth.

Still, clinics that market treatments of intravenous fluid to the stressed out and worried well can now be found nationwide.

Shapiro gets her infusions at RestoreIV in Philadelphia, but there are similar clinics in New York, Las Vegas, New Orleans, Santa Monica and Dallas, with names like The Remedy Room or Hangover Heaven. The first wave of such companies billed their treatments as a remedy for excess alcohol and partying, or too little sleep; you could get the treatment in a mobile van parked at a music festival, say, or in your hotel room.

Newer firms offer a menu of drips that claim to help rid the body of toxins, balance hormones, improve chronic medical conditions or simply give the skin a healthier glow.

Osteopathic medicine physician Jason Hartman, who launched RestoreIV with a partner out of his Philadelphia integrative medicine practice, says people want the experience he offers. Hartman's specialty is using touch to diagnose and treat patients.

He sometimes helps people remedy a hangover, he says, but his business also includes people with more serious illnesses, including chronic fatigue and migraines. For those patients, he says, IV treatment supports healing. Other clients are generally healthy and want to stay that way.

The basic IV therapy cocktail includes vitamin C, zinc and B vitamins. If you have a headache, the doctor might add a little magnesium.

"These are your natural pharmacy," Hartman says, "and in chronic diseases these things can be depleted [by] just a stressful lifestyle. And if they become deficient enough, it alters your internal pharmacology enough to possibly manifest as a symptom or disease."

The promised benefits of this sort of intravenous treatment vary from company to company.

At the bottom of the website for The Hangover Club, you'll find this warning:

"These statements have not been evaluated by the Food and Drug Administration. This product is not intended to diagnose, treat, cure, or prevent any disease. This service is intended only for healthy adults."

Hartman says any intravenous infusion comes with a small risk of infection — or pain, bruising or bleeding if the needle misses the vein. More serious complications of an IV treatment can include a blood clot, or inflammation of the vein.

And people with certain medical conditions — some metabolic diseases, for example, or congestive heart failure — shouldn't get these treatments, Hartman cautions. That's why, he says, his clinic questions every client about their medical history before a treatment begins.

At RestoreIV, the treatments cost from $150 to $200, and there's an initial $35 fee to consult with the doctor. The business doesn't accept health insurance; patients pay Hartman's office directly.

So, with the out-of-pocket expense, and only anecdotal evidence of benefit, why do people sign up for these sessions?

Ather Ali, a doctor of naturopathic medicine and health researcher at the Yale School of Medicine, says that if an IV infusion of this type makes people feel better, it's probably because of the placebo effect. And the placebo effect can be powerful.

Several years ago, Ali and his colleagues tested a popular IV treatment called the Myers' cocktail on a small group of people with fibromyalgia, a syndrome of muscle pain and fatigue that can be hard to ease. Half the 34 participants in his pilot study got Myers' intravenous cocktail of vitamins and minerals in weekly treatments for eight weeks, and the other half got a standard solution without vitamins.

"The interesting finding," Ali says, "was that everyone got better." People in both groups reported less pain, and said they were better able to do the things they need to do every day.

The placebo phenomenon is more complicated than many people understand, Ali explains. Research has shown, for example, that injections, or other invasive procedures, can generate a stronger placebo effect than dummy pills do.

If, as in the case of his study, people feel a fairly innocuous treatment is helping them, and they haven't been able to get relief in other ways, that may be a reason to use it, Ali says — even if the "fix" is 100 percent placebo effect.

"When your child falls down and scrapes their knee, you give them a kiss," he says. "There's value in that, whether or not there's clinical trial data showing that giving a kiss is better than doing nothing."

"If people are just using it to feel good or for an energy boost," he says, "I would just say go exercise for 30 minutes and you'll get more out of that."