Accessibility links
IBOT Wheelchair May Ride Again — Better Than Ever : Shots - Health News Toyota announced this year that it's backing the return of the iBOT, which went out of production in 2009. Inventor Dean Kamen says a reboot would include improvements using the latest technology. 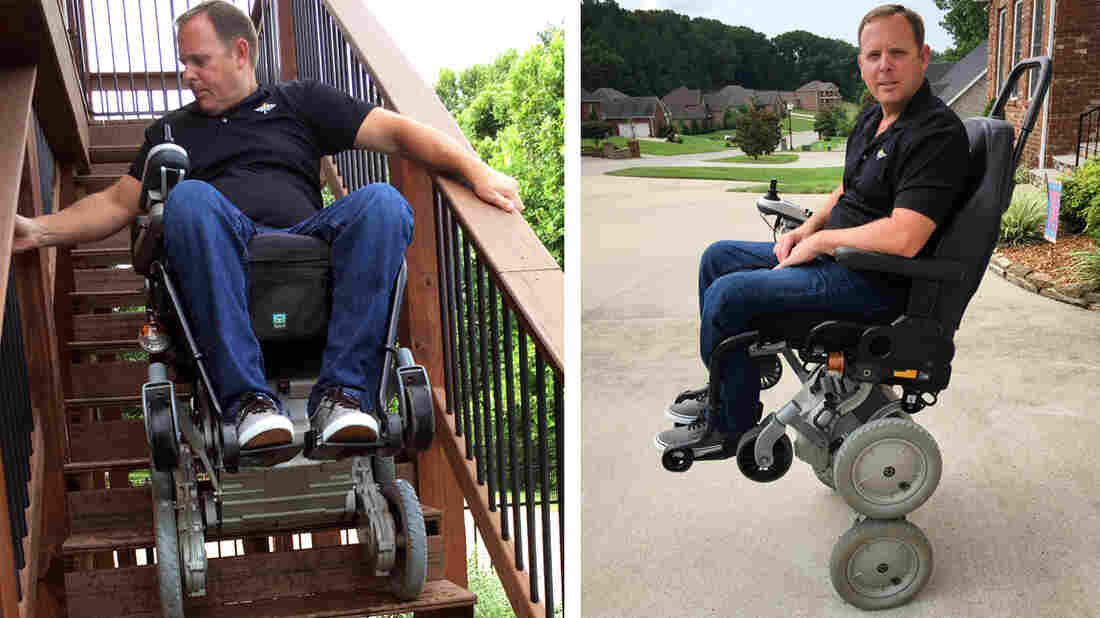 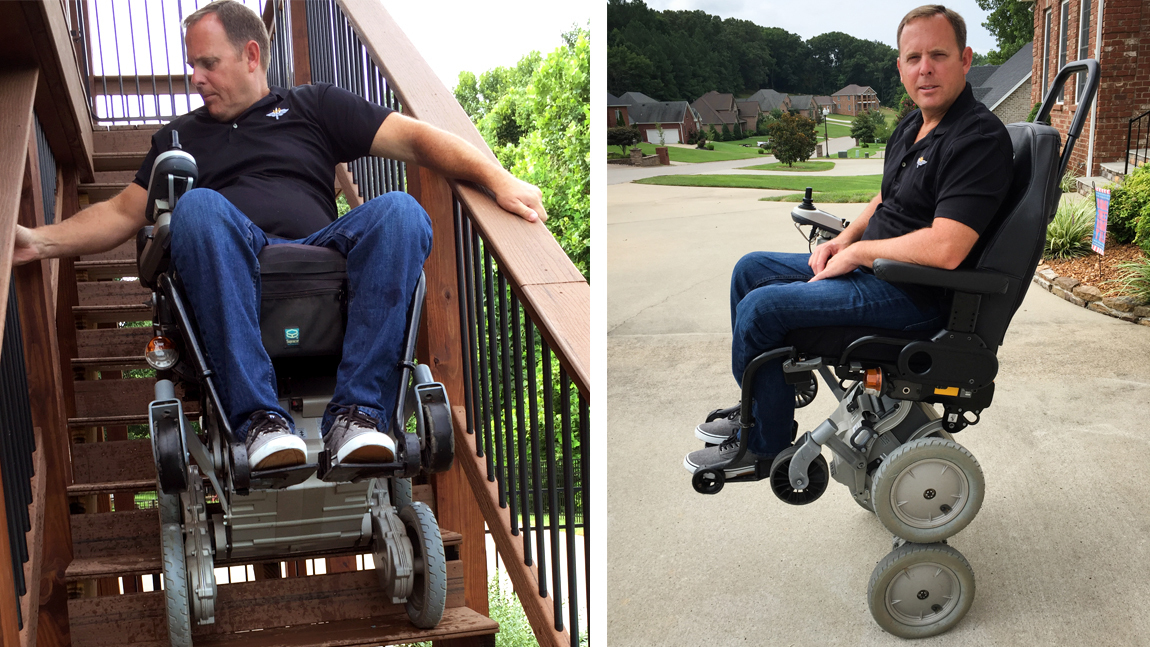 Gary Linfoot was paralyzed in a helicopter crash in Iraq. He's one of the few veterans still using an iBOT, which allows him to rise up to eye level using Segway-style balancing technology. The wheelchair was discontinued in 2009, but may soon be reissued.

Thirteen years ago, just as the United States began what was to become its longest war, a futuristic wheelchair hit the market.

The iBOT allowed paralyzed people, including many veterans of Iraq and Afghanistan, to stand up by rising to eye level. It also did something no wheelchair ever had: climb stairs.

But even though users loved it, the iBOT went out of production in 2009 when Johnson & Johnson discontinued it.

"I was very disappointed," says disabled veteran Gary Linfoot, a former Army helicopter pilot. "I knew my tent was up, I had one, but I knew there were other people out there who could use this device, this technology and it would not be available to them."

Now, however, the iBOT could be coming back.

Toyota announced this year that it's bankrolling a reboot of the iBOT, which the machine's inventor, Dean Kamen, says will allow him to make some improvements.

Kamen is widely known as the inventor of the Segway, which was actually a byproduct from development of the iBOT. The first iteration of the wheelchair had a $25,000 price tag — too high even for the department of Veterans Affairs in most cases. Most veterans who had iBOTs got them from veterans charities, and all but a few are now sitting in the garage, with nowhere to service them.

Today, Toyota is interested in some of the machine's balancing technology, possibly to be used in the company's robotic helpers for the aging. And that could mean new parts and new life for existing iBOTs as well as a new version of the chair.

It also helps that the Food and Drug Administration reclassified the iBOT from its strictest regulatory category for medical devices Class 3, alongside replacement heart valves, to Class 2, alongside condoms. That will also lower the expense of the machine, and Kamen says testimony by veterans using the machine was one key to persuading the FDA to make that switch.

For people like Linfoot, it was a game changer.

He lost the use of his legs after a 2008 helicopter crash south of Baghdad. "I wasn't shot down or anything," he says. "It was just a mechanical malfunction. Probably a $25 part failed and we lost all power to the rotor system."

Linfoot and his co-pilot survived, but the impact left Linfoot paralyzed below the chest. The iBOT allows him to navigate street curbs and the hills around his home north of Nashville, Tenn.

"It goes beyond just reaching in the cabinet to get the cookies that my wife might hide up there, or the good booze," he says, sitting on top of what looks like an easy chair balanced on a pair of unicycles.

Plus the ability to stand up is huge.

"When you go out to a social setting, back up at 6 feet, talking to somebody eye to eye, you get this sense of dignity," he says. "The disability just kind of fades into the background."

Kamen said he hopes stories like Linfoot's will help persuade his new backers to return the iBOT to production and make it available to a wider group of people.

"The reason some of these veterans need these things is they've literally given up pieces of their body for this country," he says. "The least we can do is give them back the best technology that is currently available."

Department Of Veterans Affairs To Pay For Robotic Legs

Several other companies have designed chairs that can get people with spinal injuries up to eye level and even off-road. But doctors at the department of Veterans Affairs are more excited about inventions that can actually get veterans walking again. The health effects of immobility for paralyzed people are just like the effects of sitting down all the time for able-bodied people, they say.

"Sitting is the new smoking," says Dr. Will Bauman, director of the Center of Excellence on the Medical Consequences of Spinal Cord Injury at the James J. Peters VA Medical Center in the Bronx. He and Dr. Ann Spungen, associate director of the center, have studied the secondary health effects of paralysis.

"Just like you and I, if we sat around all day, we already know that's the worst thing can do to ourselves," says Spungen.

Immobilized people are prone to weakened bones, higher blood pressure, urinary tract infections and constipation that can be debilitating. At the Bronx VA, veterans have been using an exoskeleton called a ReWalk to get them moving again. It's like a backpack with robotic leg braces that allows patients to walk using crutches.

So far, devices like these aren't that useful outside a safe, flat surface. Regular therapy with these machines can help reduce pain and promote better sleep, Spungen says.

With as little as four to six hours of walking a week, about half of patients lost more than a kilogram of body fat, says Spungen. For many problems, she says, "the best cure is to take a walk."