Accessibility links
High-Level Multitasking Is A Myth : Shots - Health News Our tendency to respond immediately to email and texts gets in the way of high-level thinking, a neuroscientist says. Want to be more productive at work? Turn off most tech, at least part of the day. 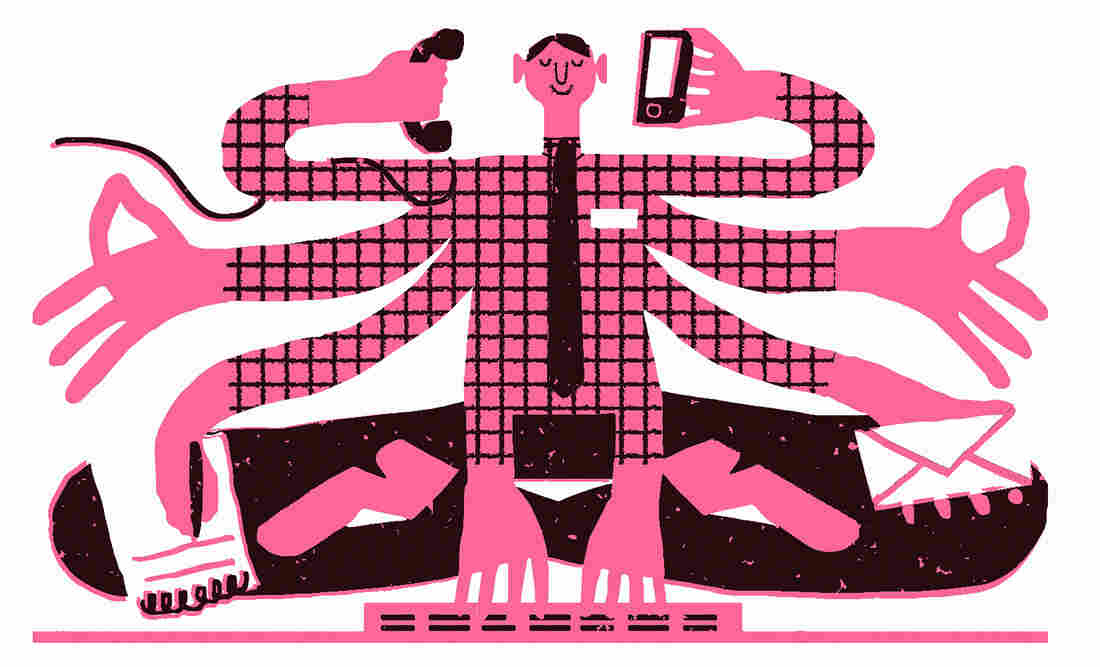 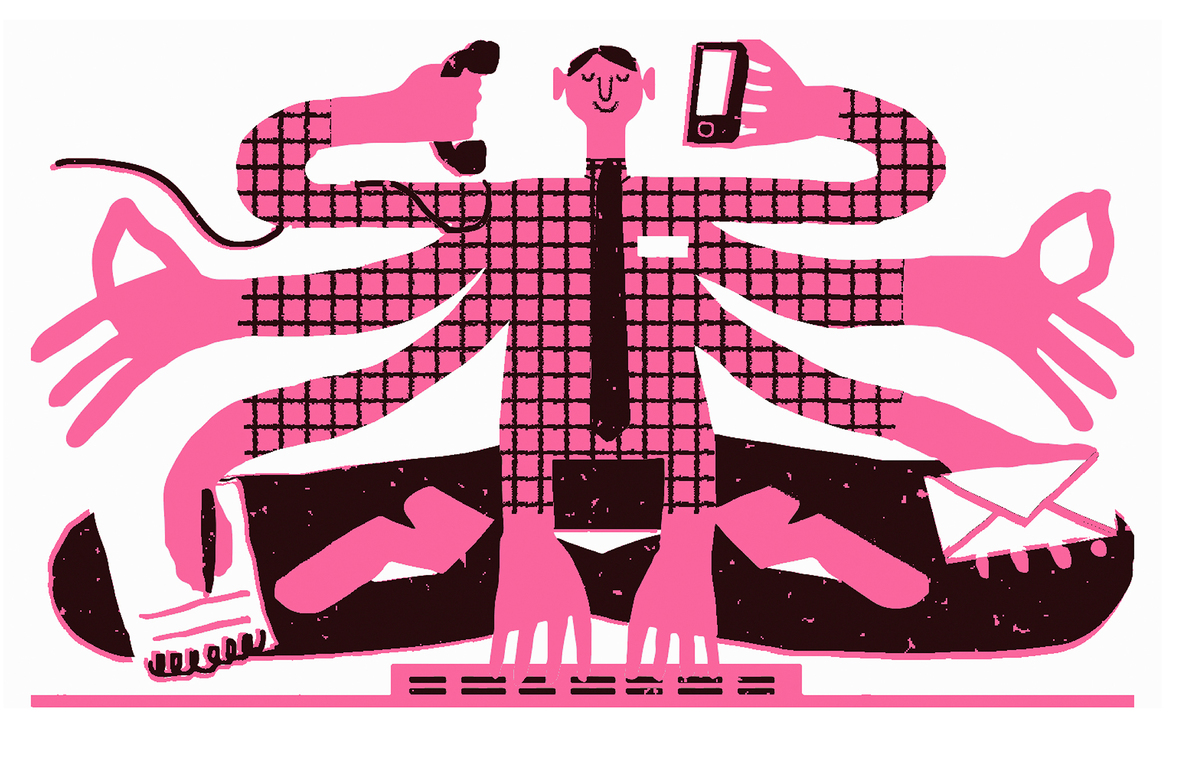 I'll admit it. I even take my phone with me when I head to the restroom, to fire off a few texts. Or I'll scroll through my email when I leave the office for lunch. My eyes are often glued to my phone from the moment I wake up, but I often reach the end of my days wondering what I've accomplished.

My productivity mystery was solved after reading The Distracted Mind: Ancient Brains in a High Tech World, by Dr. Adam Gazzaley, a neuroscientist at the University of California, San Francisco, and Larry Rosen, a research psychologist and professor emeritus at California State University, Dominguez Hills. Their book explains why the brain can't multitask, and why my near-obsessive efforts to keep up with email are likely lowering my productive output.

How the digital age zaps productivity

I visited Gazzaley in his UCSF laboratory to learn more about the science. On a video screen, he pulled up a 3-D image created from an MRI scan of a human brain. He pointed to different sections to explain what's going on when our attention flits between tasks.

How To Boost Productivity

Feeling chronically distracted? Dr. Adam Gazzaley has been there, too, and says these tricks can help you buckle down and think!

• Clear your work space. Remove mobile devices and extraneous papers.
• Use one computer screen. Shut down all unnecessary programs and apps.
• Open one browser, and use only one tab.
• Turn off email.
• Set expectations. Tell your boss you're going offline for a while. Or, set an auto response for texts and emails, explaining that you'll be offline for a set period of time.
• Work in a quiet environment. If you must work in a coffee shop use noise-canceling headphones.
• Display a "no interruption zone" sign at your desk or on your office door.
• Check out helpful apps like SelfControl, Freedom or FocusMe.

"The prefrontal cortex is the area most challenged," Gazzaley said. "And then visual areas, auditory areas, and the hippocampus — these networks are really what's challenged when we are constantly switching between multiple tasks that our technological world might throw at us."

When you engage in one task at a time, the prefrontal cortex works in harmony with other parts of the brain, he explained, but when you toss in another task it forces the left and right sides of the brain to work independently. It's this process of splitting your attention that usually leads to mistakes.

In other words, each time our eyes glance away from our computer monitor to sneak a peek at a text message, the brain takes in new information, which reduces our primary focus. We think the mind can juggle two or three activities successfully at once, but Gazzaley thinks we woefully overestimate that ability.

Skeptical? Try checking your email on a conference call.

"The act of doing that makes it so incredibly obvious how you can't really parallel process two attention-demanding tasks," he said. "You either have to catch up, and ask what happened in the conversation, or you have to read over the email before you send it — if you're wise!"

Answering an email takes much longer than you think

Our tendency to respond immediately to emails and texts gets in the way of high-level thinking, he said. If you're in the middle of a project and stop to answer somebody's note, it could take you nearly a half-hour to get back on task, some studies suggest.

"When a focused stream of thought is interrupted, it needs to be reset," explained Gazzaley. "You can't just press a button and switch back to it. You have to re-engage those thought processes, and re-create all the elements of what you were engaged in. That takes time, and frequently one interruption leads to another."

And that can make you less productive. 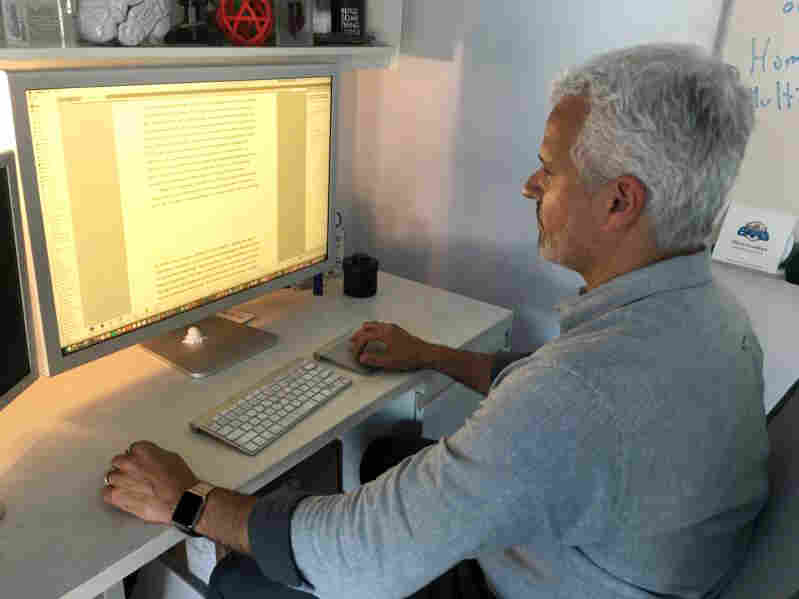 Based on his research, when UCSF neuroscientist Adam Gazzaley needs to focus on a big project he now clears his desk, works on one screen and turns off his phone. Sierra Niblett/Courtesy of UCSF hide caption 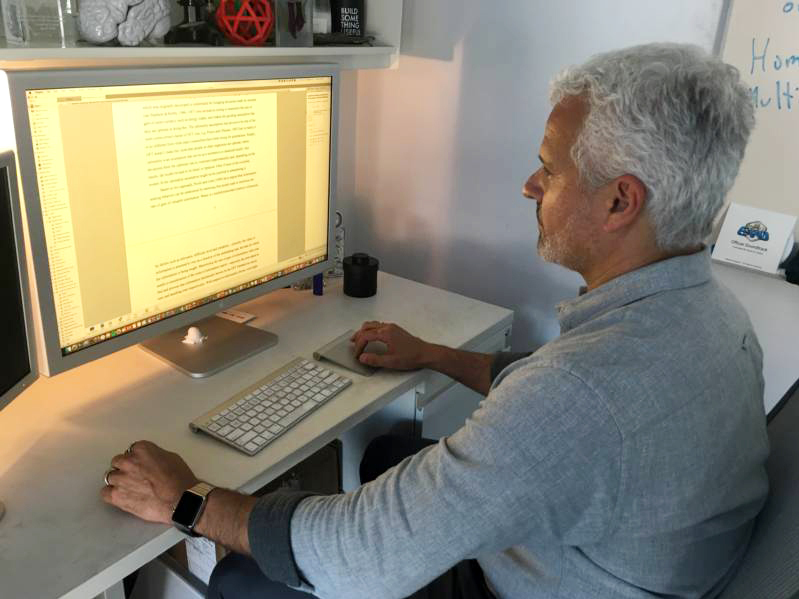 Based on his research, when UCSF neuroscientist Adam Gazzaley needs to focus on a big project he now clears his desk, works on one screen and turns off his phone.

Plus, mounting evidence shows a heavy diet of multitasking with multiple media could be hurting the brain's ability to think, in important ways — and that's true even for tech-native young people. Stanford researchers in 2009 studied the minds of students and others who regularly engage in several digital communication streams at once and found that, in general, high-tech jugglers struggle to pay attention, recall information or complete one task at a time.

"When they're in situations where there are multiple sources of information coming from the external world or emerging out of memory, they're not able to filter out what's not relevant to their current goal," said Stanford neuroscientist Anthony Wagner. "That failure to filter means they're slowed down by that irrelevant information."

The researchers are still studying what's causing multitaskers to perform poorly on cognitive tests. It could be that they are born with an inability to concentrate, or digital distractions are taking a toll. In any case, the researchers believe the minds of multitaskers are not performing optimally.

But, take heart, Gazzaley said. You don't have to opt out of technology to get some of that brainpower back. In fact, there's a time and place for multitasking. If you're in the midst of a mundane task that just has to get done, for example, it's probably not detrimental to have your phone nearby or a bunch of tabs open. The distractions may reduce boredom and help you stay engaged.

Still, if you're finishing a business plan or a high-level writing project and need to focus, there are some steps you can take that should help. Check out Gazzaley's tips for turning off distractions in the sidebar above.

Then, get back to work!

This story was produced by KQED's health and technology blog, Future of You. The blog's host and editor is Jon Brooks.