Accessibility links
A Whole City May Help Test A Treatment For Shooting Victims : Shots - Health News Victims of a shooting or stabbing in Philadelphia may soon become part of a study to figure out what kind of care is better--going straight to a hospital or getting more care at the scene. 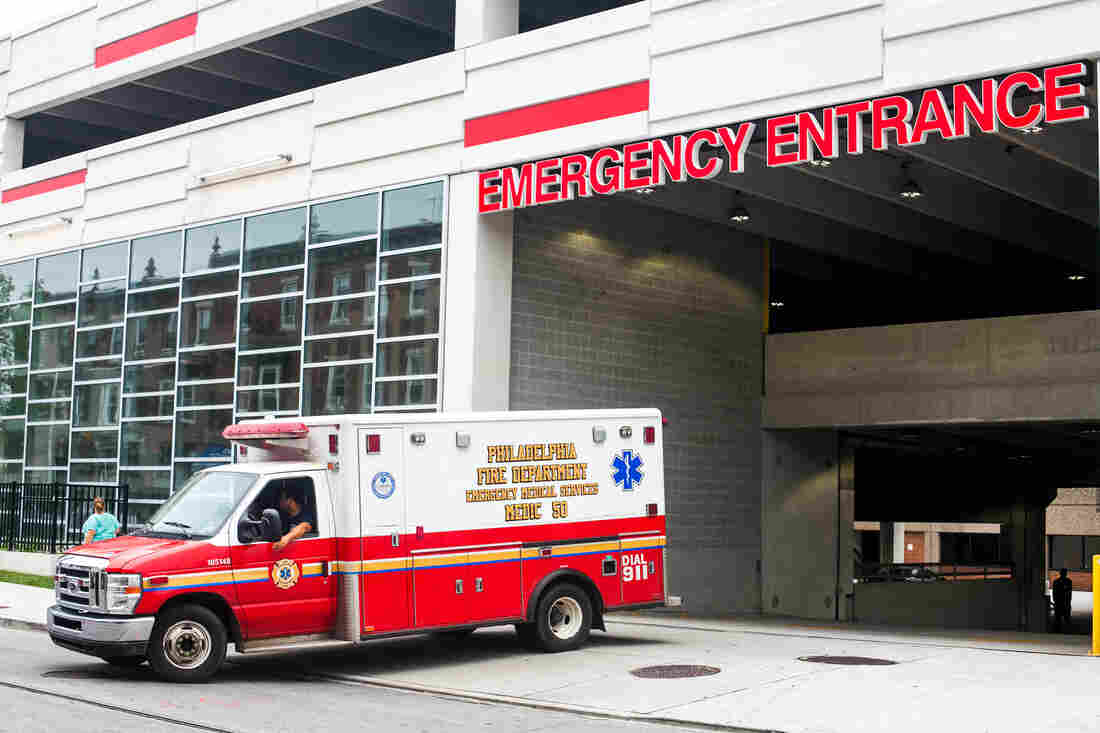 An ambulance pulls out of the emergency entrance at Temple University Hospital in North Philadelphia. Brad Larrison for NewsWorks hide caption 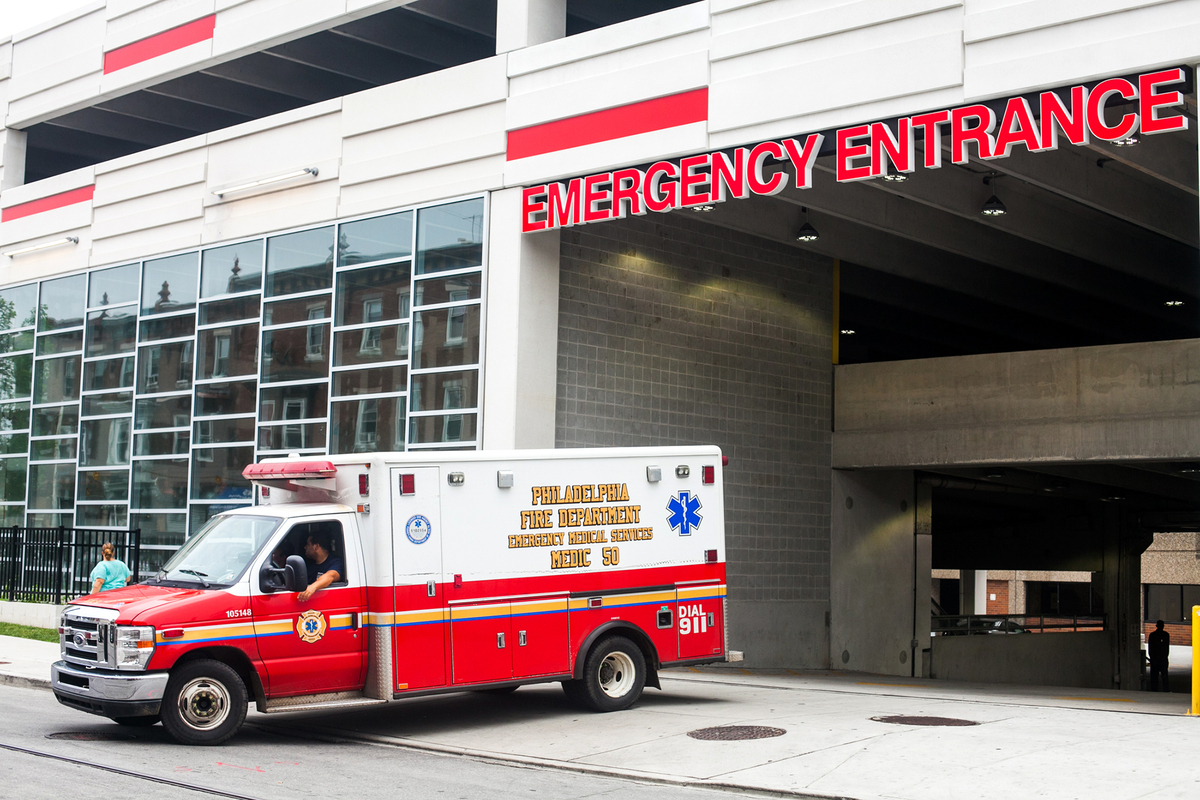 An ambulance pulls out of the emergency entrance at Temple University Hospital in North Philadelphia.

Dr. Zoe Maher has never been busier. In addition to being a trauma surgeon and a new mom, she's spent the last year and half talking to hospital patients and community groups across Philadelphia about a study she's confident will save more adult gunshot and stab wound victims.

On a recent Saturday morning, Maher stood before a dozen members of a North Philadelphia neighborhood association to walk them through the specifics of the Philadelphia Immediate Transport in Penetrating Trauma Trial. At the heart of the study is a simple but counterintuitive idea. For patients who are potentially bleeding to death, Maher and her colleagues say, just basic care is better until they reach the hospital.

To test this, patients in the study would get different medical attention based on the dispatch number city paramedics receive – what's called a randomized study.

"It's like the flip of a coin if patients are getting advanced or basic," said Maher, who works at Temple University Hospital.

Odd numbers will get what's called advanced care, which is what the majority of patients transported by paramedics get now. It includes inserting a breathing tube or supplying intravenous fluids.

Even numbers will get what's known as basic care, which can include hemorrhage control, breathing assistance with a bag-valve mask, dressing wounds and aligning bones. They would then be immediately transported to the hospital.

But the idea of assigning types of care randomly got mixed reviews at the community meeting in North Philadelphia.

Joanne Taylor was wary, but, like nearly everyone in the room, she has first-hand experience with gun violence. She said she is mourning a husband, son, grandson and cousin, so she's willing to support anything that may save more lives.

"It shakes me up a little bit, but I know something has to be done somewhere," said a teary-eyed Taylor afterwards. 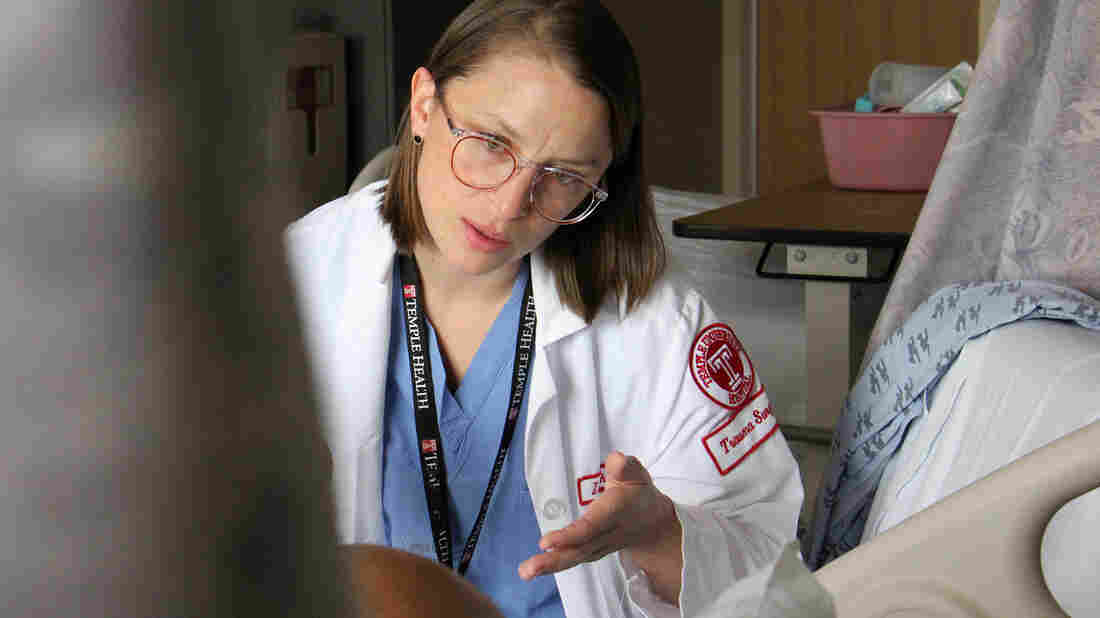 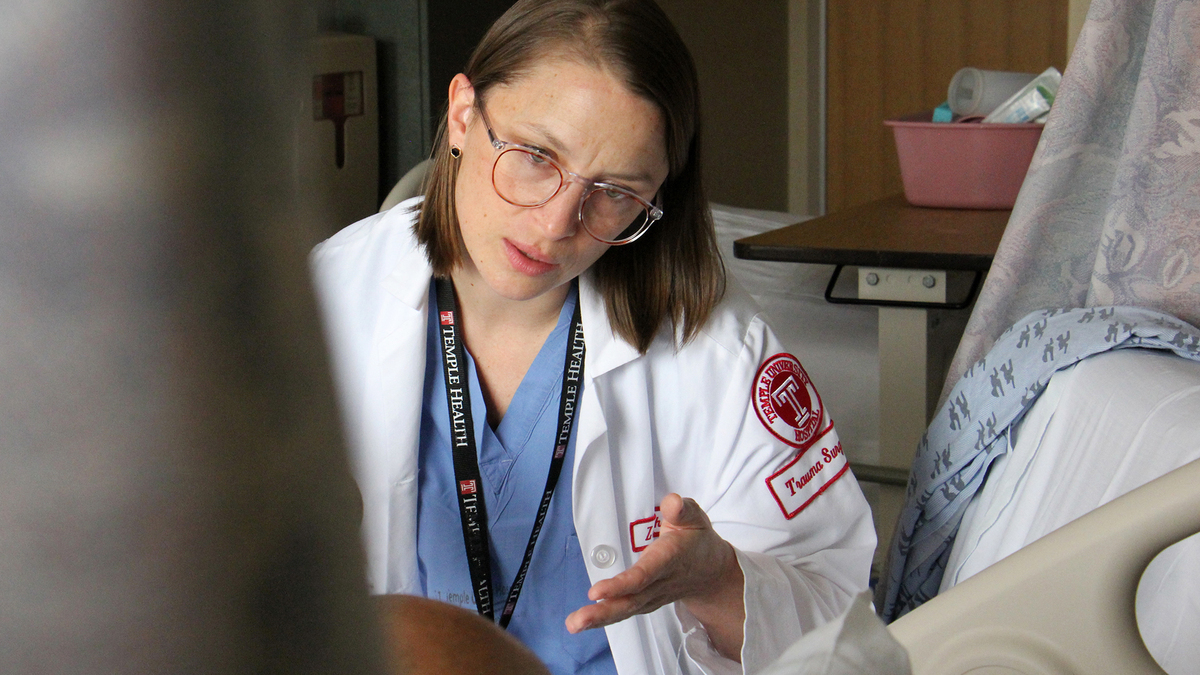 Others had more trepidation.

"In the interim, you're still sacrificing people, somebody," said Charles Lanier.

Yanitza Gonzalez, a staffer with City Councilwoman Maria Quinones-Sanchez, nodded from across the room.

"It almost seems like we'll be gambling with people's lives," said Gonzalez.

Community buy-in is key for Maher. She wants to tell as many people about the study before patients are enrolled, potentially this fall, and she told them residents can opt out.

Maher has heard the gambling response before, but she's convinced that her study is closer to a sure thing. She said previous research has proven as much, and that her trial is just about confirming those results.

The study would look only at use of IV fluids and breathing tubes, explained Maher.

That's because if someone is shot or stabbed and bleeding to death, the body instinctively tries save itself by constricting blood vessels and forming clots. For those clots to stick, the body needs to maintain a lower-than-normal blood pressure. IV fluids can raise a patient's blood pressure and potentially cause more internal bleeding.

Maher said a breathing tube could also be problematic and cardiopulmonary resuscitation or CPR is a better option because it keeps more blood moving from the heart to the rest of the body.

On average, about 30 percent of patients who would qualify for this study die. If basic care becomes the norm for paramedics in Philadelphia, Maher says the rate could get down to roughly 20 percent. In a city that routinely records 250-plus murders each year, that could potentially mean a lot of lives being saved.

Dr. Brent Myers, president-elect of the National Association of EMS Physicians, said that would be a big deal for medical professionals, especially paramedics.

"This has been one of the great questions, is how much advanced life support is beneficial for victims of penetrating trauma. You could probably go to any paramedic in any city in the United States and engage in a debate, because we just don't have the appropriate evidence to guide the decision," said Myers.

It's part of why Myers said he wouldn't expect a lot of grousing from paramedics, even though it will effectively dictate what they do in the field.

Dr. Amy McGuire, a medical ethicist at Baylor College of Medicine in Texas, said while the study does carry some risk for patients, there's nothing inherently unethical it.

"The only way to really know whether this is better or not is to do a randomized trial and to compare it to what is currently the standard of care," McGuire said.

Where she does see some moral gray area is in the community outreach piece of the trial. It's impossible for everyone in the city to know about the study before it gets underway.

"They'll be enrolled in the study, and they may not have wanted to have participated," said McGuire.

Every resident in Philadelphia is a potential enrollee in the study, all 1.5 million people. But residents can choose to not participate. They would get a wristband that they'd have to wear for the duration of the study, which is expected to last five years, maybe more.

Researchers hope to enroll roughly 1,000 patients, half of whom would get advanced care, half would get basic care. Anyone who is under 18, pregnant or a prisoner will be excluded.

Maher said the study would end early if it's clear that one kind of care is doing more harm than good.

"All of the evidence points to us being right, but if we are wrong, we will not complete the study," said Maher. "We surely don't want to hurt anyone."