Accessibility links
'Patient Zero,' Gaetan Dugas, Exonerated By HIV Research : Shots - Health News A Canadian flight attendant had been blamed by media for years for bringing HIV to the U.S. A new study proves that's impossible. The virus that took hold came from Haiti in the early 1970s. 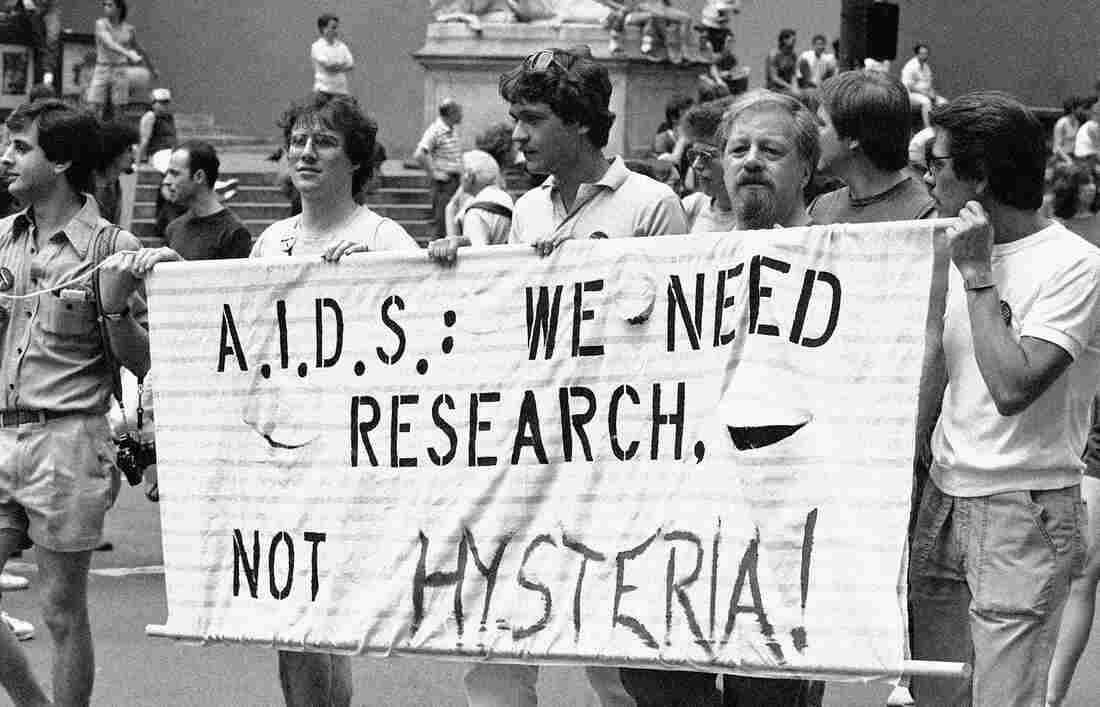 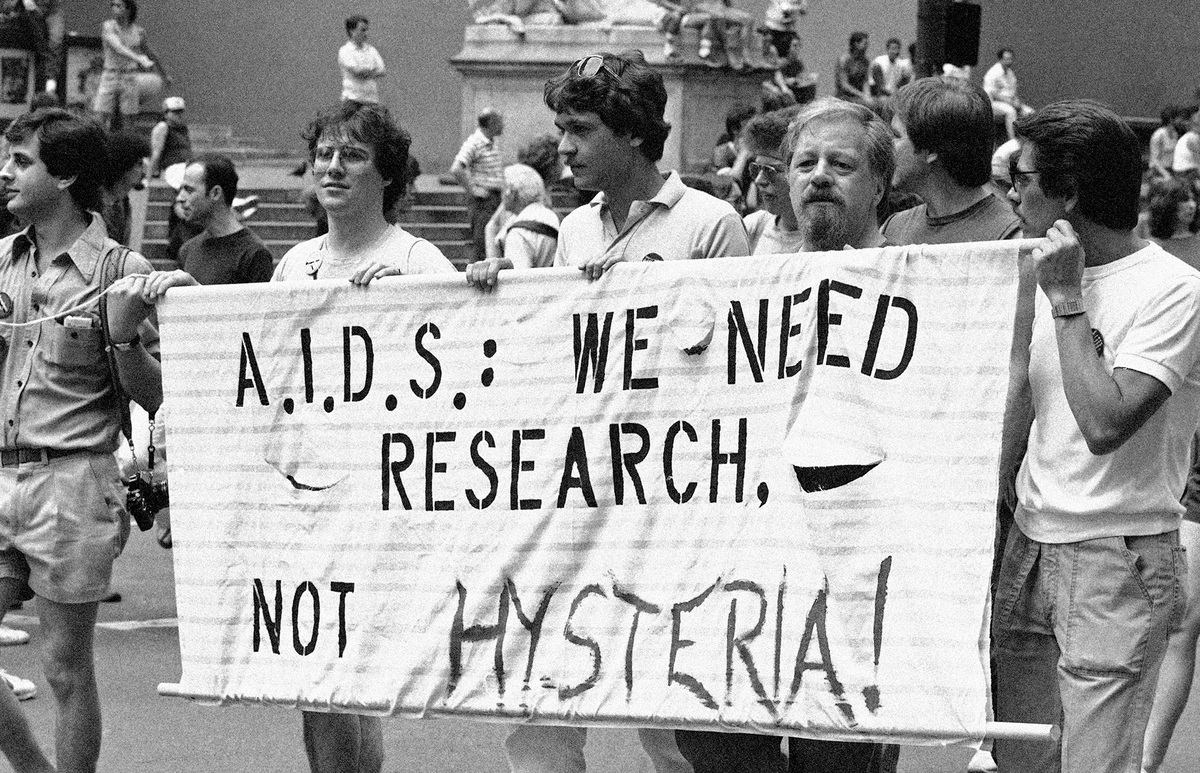 Men protesting in support of more money for AIDS research marched down Fifth Avenue during the 14th annual Lesbian and Gay Pride parade in New York in 1983.

It's one of the biggest medical mysteries of our time: How did HIV come to the U.S.?

By genetically sequencing samples from people infected early on, scientists say they have figured out when and where the virus that took hold here first arrived. In the process, they have exonerated the man accused of triggering the epidemic in North America.

A team of researchers at the University of Arizona sequenced HIV virus taken from Canadian flight attendant Gaetan Dugas, the man called "Patient Zero" in the best-selling book And the Band Played On, which chronicled the early days of the AIDS epidemic in America.

The scientists also sequenced the virus from eight other men infected with HIV during the 1970s. From these genetic codes, the scientists estimate HIV came to the U.S. from Haiti in 1970 or 1971, but it went undetected by doctors for years.

"The virus got to New York City pretty darn early," says evolutionary biologist Michael Worobey, who led the study. "It was really under the radar for a decade or so."

The disease spread around New York City for a few years, with the number of infections doubling each year. Then in 1976, one person took the virus across the country to San Francisco, Worobey and his team found.

But the study, published Wednesday in the journal Nature, offers more than just a record of HIV's path. It also finally puts to rest one of the most famous narratives surrounding the AIDS epidemic — an urban legend that all got started because of the misinterpretation of the letter O.

Back in the early '80s, behavioral scientist William Darrow was a young scientist at the Centers for Disease Control and Prevention. He drew the assignment of a lifetime: Figure out why gay men in Los Angeles were dying of a strange illness.

Doctors were stumped. Some scientists thought maybe it was caused by "poppers," nitrite-based chemicals that are inhaled recreationally. Others thought maybe "overexposure to sperm from many sources was having an immune-suppressant effect," The New York Times reported.

But in 1981, Darrow caught a clue: Rumor had it that some of the early AIDS cases were lovers. "Whoa! This is the first indication that we had that the disease might be sexually transmitted from one person to another," Darrow says.

So Darrow started interviewing these men about their sex lives. One day, three men — who didn't know each other — all named the same lover.

"They said, 'This flight attendant from Canada. He flew for Air Canada. Geez, he was such a great guy and very handsome,' " Darrow remembers hearing.

The man was Gaetan Dugas. And his name popped up again and again in interviews. Eventually, Darrow linked eight early AIDS cases to Dugas.

When Darrow wrote up his findings inside the CDC, he didn't name names. Instead, he called the men by a code, based on the city they lived in. For those in LA: "There was LA1, LA2 ... and so forth," Darrow says. 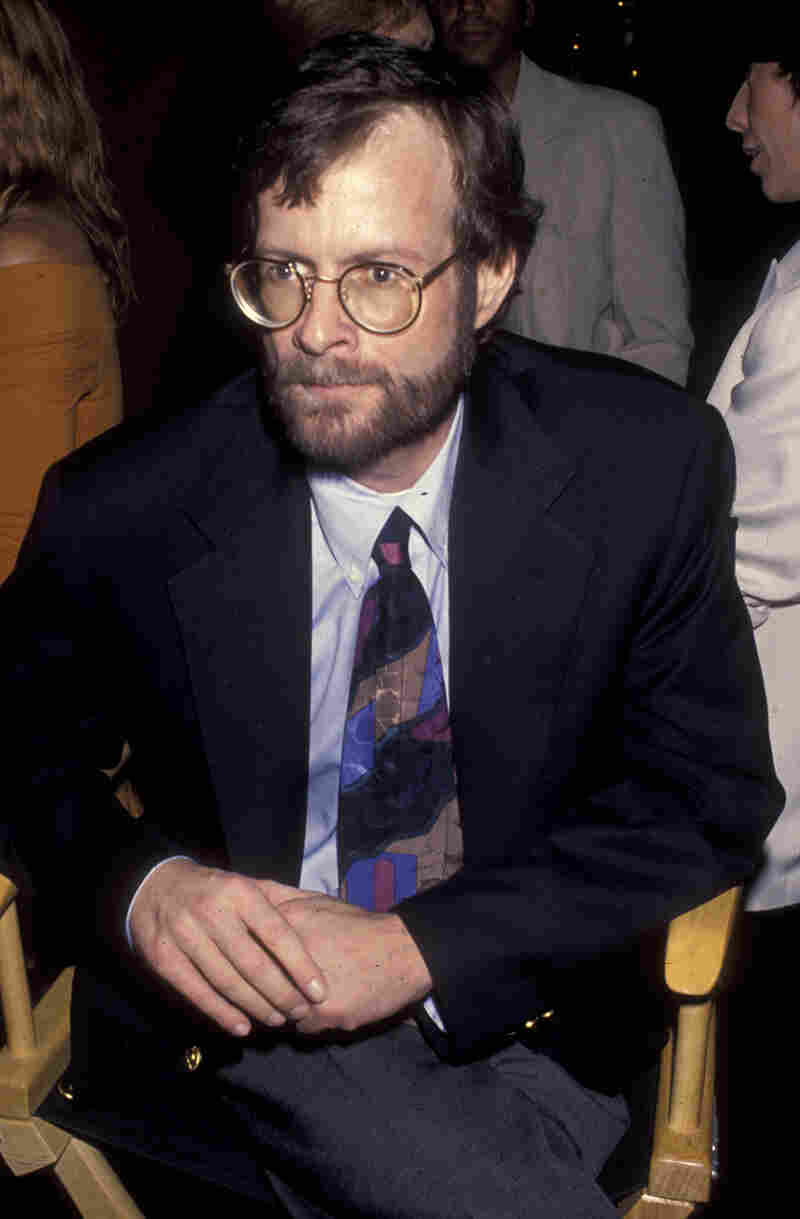 Randy Shilts attended a screening of And the Band Played On on Aug. 31, 1993, at the Academy Theater in Beverly Hills, Calif. Ron Galella/WireImage/Getty Images hide caption 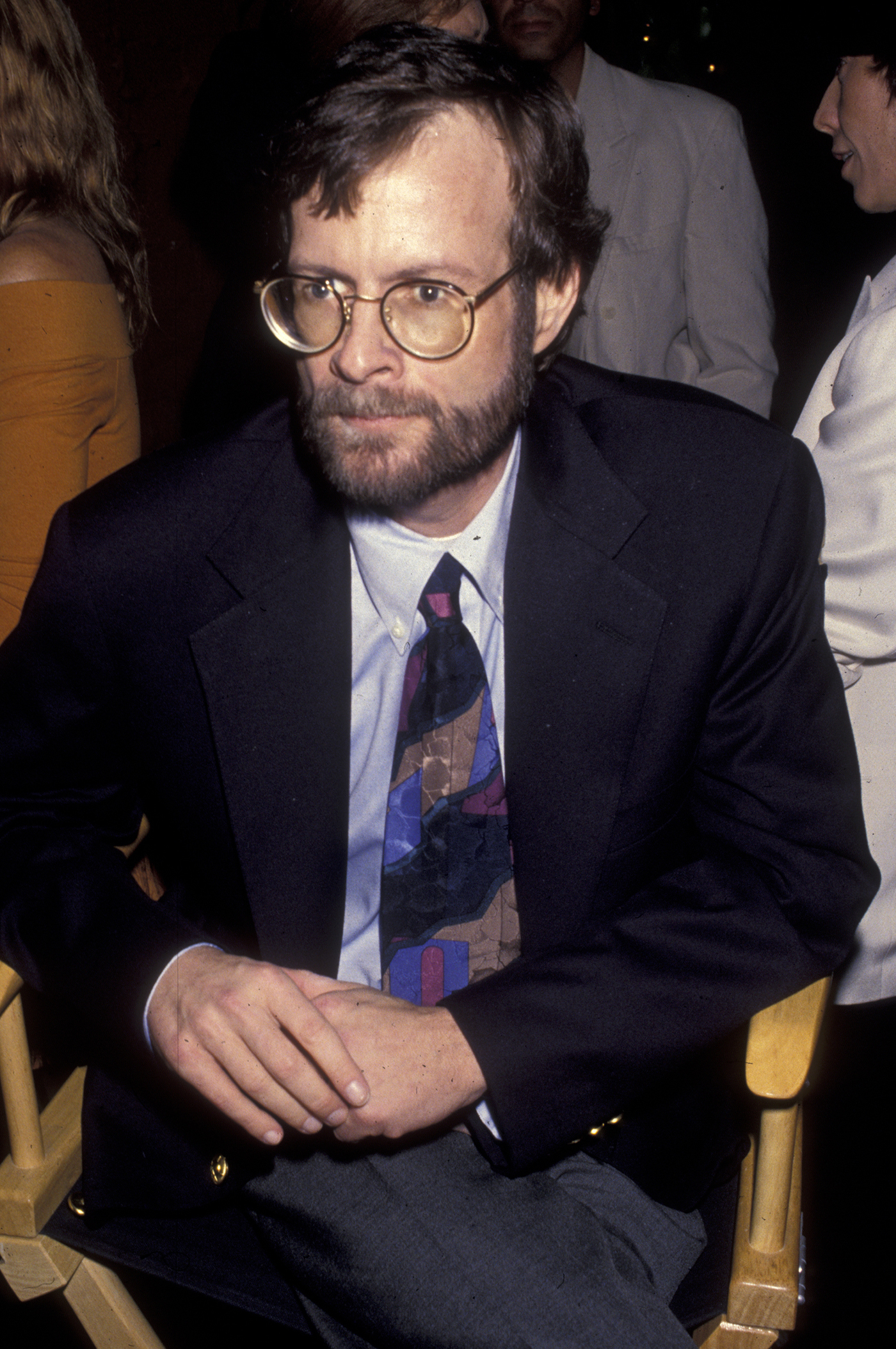 Randy Shilts attended a screening of And the Band Played On on Aug. 31, 1993, at the Academy Theater in Beverly Hills, Calif.

And for Dugas, a Canadian? "Patient O, the outside-of-California case."

A few years later, in March 1984, Darrow and his colleagues published their study showing that AIDS was a new, sexually transmitted disease. That same month, Dugas died of AIDS near his hometown in Quebec.

"And then three years later, in 1987, Dugas sort of comes back to life," says Phil Tiemeyer, a historian at Kansas State University.

He means Dugas comes back to life as a character, in the book And the Band Played On by Randy Shilts, a reporter in San Francisco. The book detailed the start of the AIDS epidemic, including the story of Dugas.

"This is where Dugas really moves from Patient O to Patient Zero — the epicenter, if you will, of the epidemic," Tiemeyer says.

You see, while Darrow was working on his study, someone at the CDC, or working with the CDC, referred to Darrow's letter O as the numeral zero instead. And people then started calling Dugas "Patient Zero," Darrow tells NPR.

So when the study got written up, Dugas was labeled "Patient 0," with the numeral, not the letter.

The designation "was never meant to suggest that he was the first case," Darrow says. "It only meant there was some person who was very important in this cluster of cases."

Even Shilts was confused by the labeling.

"In the middle of that study was a circle with an O next to it, and I always thought it was Patient O," Shilts told Life magazine. "When I went to the CDC, they started talking about Patient Zero. I thought, 'Ooh, that's catchy.' "

He took the idea and ran with it.

In his book, Shilts repeatedly calls Dugas "Patient Zero." The book says there's no doubt Dugas "played a key role" in spreading AIDS across the country. And it's "a question of debate" about whether Dugas brought the virus to North America.

Publicity for Shilts' book triggered a flood of media about Dugas. And the media expanded his role in the epidemic further, erroneously so, according to the new study.

The New York Post ran a huge headline declaring "The Man Who Gave Us AIDS."

Time magazine jumped in with a story called "The Appalling Saga Of Patient Zero." And 60 Minutes aired a feature on him. "Patient Zero. One of the first cases of AIDS. The first person identified as the major transmitter of the disease," host Harry Reasoner said.

From that point on, Tiemeyer says, Dugas became lodged in the popular consciousness as Patient Zero — the source of HIV in North America and the scapegoat for a horrific new pandemic. A film version of the book, televised on HBO in 1993, further cemented Dugas as the key figure in the epidemic.

"This character, Gaetan Dugas, has every trait of a villain that America is looking for in the AIDS crisis," Tiemeyer says. "He's gay and unshamed about it. He's beautiful. He's even a foreigner who speaks with this seductive accent. He's the perfect villain."

But Dugas wasn't a villain — not at all.

In fact, people who knew Dugas told me he was charismatic, kind and energetic. Right before he died, Dugas volunteered at a nonprofit to help other people with HIV.

And he was critical to figuring out what AIDS was. Not only did Dugas fly to the CDC in Atlanta to donate blood samples, Darrow says, but he also offered the CDC a huge list of names of potential AIDS cases

"I think this is crucial," the University of Arizona's Worobey says. "In a way, it's not that surprising that you could place Dugas at the center of a cluster, because I'm quite certain he shared more names of people [who were lovers] than any other person in that study. So there's a kind of ascertainment bias [in Darrow's study]."

Worobey's research shows that by the late 1970s, nearly 7 percent of gay men in New York City were infected with HIV, and nearly 4 percent in San Francisco were infected.

By the time Dugas caught HIV, there were many people infected in the U.S., maybe even thousands of people, Worobey says. And the HIV sequence taken from Dugas' blood looks very similar to these other sequences. There's nothing special about it, Worobey says.

So Dugas couldn't possibly be Patient Zero. He's not even close.

"To me, there's something nice about going back and correcting the record," he says. "He has been blamed for things that no one should be blamed for."

In previous audio versions of this story, we mispronounced Randy Shilts' last name as Schultz.

Previously posted Oct. 26: A previous Web version of this story misidentified Andy Rooney as the host of a 60 Minutes segment on Patient Zero. It was Harry Reasoner.