Accessibility links
Think Twice Before You Post Those Cute Kid Photos Online : Shots - Health News The kids look so darned cute in that photo, it's hard not to post it online for all to see. But there are privacy risks to sharing children's images, and children often don't want the exposure. 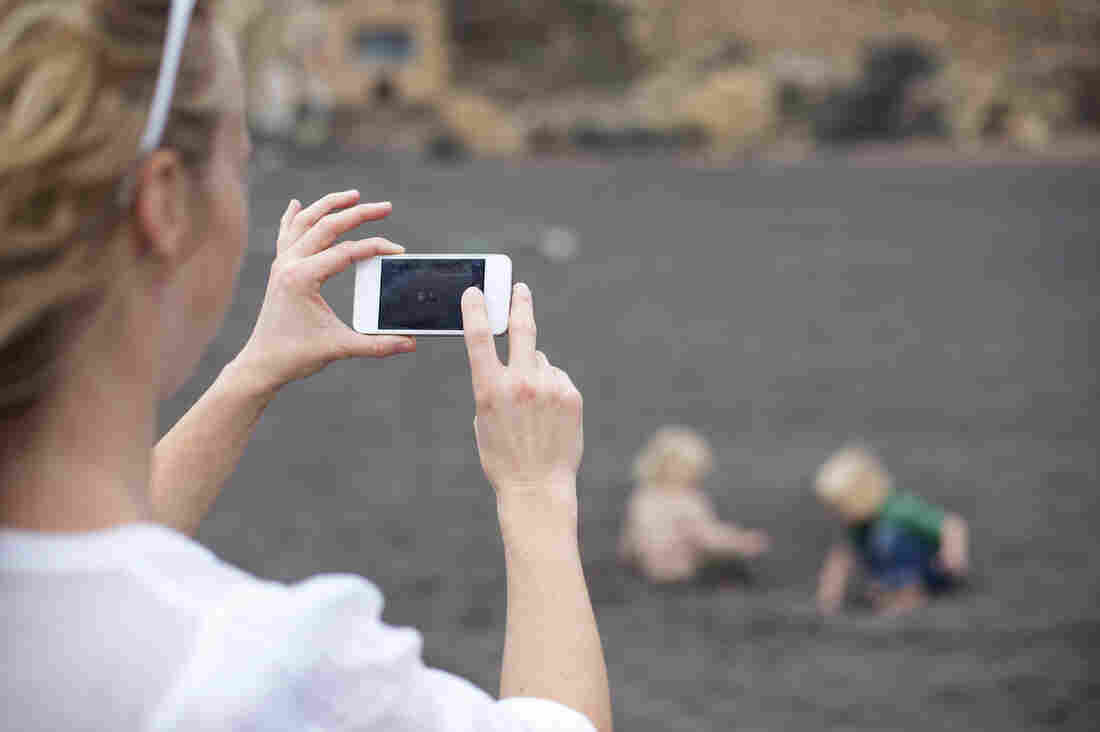 Children's photos that parents have posted online have ended up in advertisements and on pornography sites. Cultura RF/Getty Images hide caption 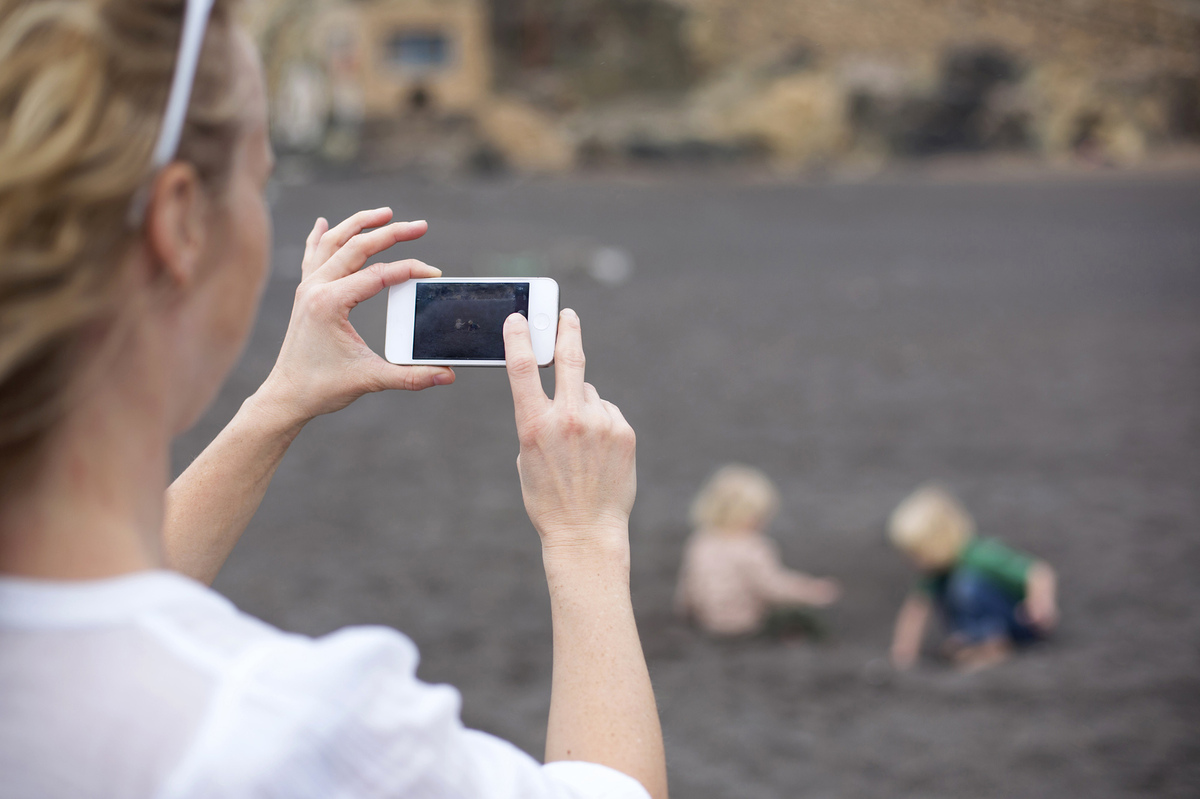 Children's photos that parents have posted online have ended up in advertisements and on pornography sites.

When Katlyn Burbidge's son was 6 years old, he was performing some silly antic typical of a first-grader. But after she snapped a photo and started using her phone, he asked her a serious question: "Are you going to post that to Facebook?"

She laughed and answered, "Yes, I think I will." What he said next stopped her.

That's when it dawned on her: She had been posting photos of him online without asking his permission.

"We're big proponents of bodily autonomy and not forcing him to hug or kiss people unless he wants to, but it never occurred to me that I should ask his permission to post photos of him online," says Burbridge, a mom of two in Wakefield, Mass. "Now when I post photos of him on Facebook, I show him the photo and get his okay. I get to approve tags and photos of myself I want posted — why not my child?"

When her 8-month-old is 3 or 4 years old, she plans to start asking him in an age-appropriate way, "Do you want other people to see this?"

That's precisely the approach that two researchers advocated before a room of pediatricians last week at the American Academy of Pediatrics meeting, when they discussed the 21st century challenge of "sharenting," a new term for parents' online sharing about their children.

"As children's-rights advocates, we believe that children should have a voice about what information is shared about them if possible," says Stacey Steinberg, a legal skills professor at the University of Florida Levin College of Law in Gainesville.

Whether it's ensuring your child isn't bullied over something you post, that their identity isn't digitally "kidnapped" or that their photos don't end up on a half dozen child pornography sites, as one Australian mom discovered, parents and pediatricians are increasingly aware of the importance of protecting children's digital presence.

Steinberg and Bahareh Keith, an assistant professor of pediatrics at the University of Florida College of Medicine, say most children will likely never experience problems related to what their parents share, but a tension still exists between parents' rights to share their experiences and their children's rights to privacy.

"We're in no way trying to silence parents' voices," Steinberg says. "At the same time, we recognize that children might have an interest in entering adulthood free to create their own digital footprint."

They cited a study presented earlier this year of 249 pairs of parents and their children in which more than twice as many children than parents wanted rules on what parents could share.

"The parents said, 'We don't need rules — we're fine,' and the children said, 'Our parents need rules,' " Keith says. "The children wanted autonomy about this issue and were worried about their parents sharing information about them."

She pointed out that the American Academy of Pediatrics offers guidelines to parents on monitoring their children's social media use, but not the other way around, something David Hill, chair of the AAP Council on Communications and Media, expects will become an important part of AAP's messaging.

Although its current media guidelines do recommend that parents model appropriate social media use for their children, it does not explicitly discuss oversharing by parents.

"I think this is a very legitimate concern, and I appreciate their drawing our attention to it," Hill, a father of five, says. He sees a role for pediatricians to talk with parents about this, but believes the messaging must extend far beyond pediatricians' offices. "I look forward to seeing researchers expand our understanding of the issue so we can translate it into effective education and policy," he says.

There's been little research on the topic, Steinbert wrote in a law article about this issue. While states could pass laws related to sharing information about children online, Steinberg feels parents themselves are generally best suited to make these decisions for their families.

"While we didn't want to create any unnecessary panic, we did find some concerns that were troublesome, and we thought that parents or at least physicians should be aware of those potential risks," Steinberg says. They include photos repurposed for inappropriate or illegal means, identity theft, embarrassment, bullying by peers or digital kidnapping.

Parents aren't oblivious to these possibilities. A March 2015 survey of 569 parents of children ages 4 and younger, conducted by C.S. Mott Children's Hospital at the University of Michigan, found that 68 percent worried about their child's privacy and 67 percent worried their children's photos might be reshared — a concern grounded in reality.

For example, an unscientific survey of an online child pornography site by an Australian government official found a significant chunk of the photos had initially been shared by parents on sites such as Facebook and Instagram. The photos themselves were mostly innocent, everyday scenes of kids playing, but they were accompanied by explicit, inappropriate comments. The Australian official estimated that "about half" of the 45 million images "appeared to be sourced directly from social media."

But that's the sordid side, with risks that must be balanced against the benefits of sharing. Steinberg pointed out that parental sharing on social media helps build communities, connect spread-out families, provide support and raise awareness around important social issues for which parents might be their child's only voice.

The same C.S. Mott survey found among the 56 percent of mothers and 34 percent of fathers who discussed parenting on social media, 72 percent of them said sharing made them feel less alone and nearly as many said sharing helped them worry less and gave them advice from other parents. The most common topics they discussed included kids' sleep, nutrition, discipline, behavior problems and day care and preschool.

"There's this peer-to-peer nature of health care these days with a profound opportunity for parents to learn helpful tips, safety and prevention efforts, pro-vaccine messages and all kinds of other messages from other parents in their social communities," says Wendy Sue Swanson, a pediatrician and executive director of digital health at Seattle Children's Hospital, where she blogs about her own parenting journey to help other parents. "They're getting nurtured by people they've already preselected that they trust," she says.

"How do we weigh the risks, how do we think about the benefits, and how do we mitigate the risks?" she says. "Those are the questions we need to ask ourselves, and everyone can have a different answer."

For mom Karen Koy, of Platte City, Mo., avoiding nudity or posts about bodily fluids is a given, but for things she's uncertain about, she asks herself a series of questions.

"Who does this serve? If it's anyone other than the kid, no go," she explained via Facebook Messenger. "Is this something people would enjoy hearing or seeing? If the answer is no, no go. Is this something I would love to see pop up as a Facebook memory on a bad day? If not, no go."

The last question is the reason she did not share photos when her daughter was hospitalized.

"She looked adorable in the oversized hospital gown, which she was wearing because she was vulnerable, and I feel like posting that takes advantage of that vulnerability to gain attention for us, her parents," Koy says. "Her being in the hospital shouldn't be about us, it should be about her and what she needs in that moment."

"It's been hard not to share pics of her because people always want to know how babies and toddlers are doing and to see pictures, but we made the decision to have social media, she did not," O'Hanlon told NPR via Facebook Messenger.

For parents just starting to realize the possible risks of sharing their children's lives online, talk to your child about what they're comfortable with and follow some basic guidelines.

Similarly, Alison Jamison of Fairport, N.Y., decided with her husband that their child had a right to their own online identity. They did use an invitation-only photo sharing platform so that friends and family, including those far away, could see the photos, but they stood firm when they received pushback about not using other social media platforms, she told NPR via Facebook Messenger.

"For most families, it's a journey. Sometimes it goes wrong, but most of the time it doesn't," says Swanson, who recommends starting to ask children permission to post narratives or photos around ages 6 to 8. "We'll learn more and more what our tolerance is. We can ask our kids to help us learn as a society what's okay and what's not."

Indeed, that learning process goes both ways. Bria Dunham, a mother in Somerville, Mass., was so excited to watch a moment of brotherly bonding while her first-grader and baby took a bath together that she snapped a few photos. But when she considered posting them on Facebook, she took the perspective of her son: How would he feel if his classmates' parents saw photos of him chest-up in the bathtub?

"It made me think about how I am teaching him to have ownership of his own body and how what is shared today endures into the future," Dunham says. "So I kept the pictures to myself and accepted this as one more step in supporting his increasing autonomy."