Accessibility links
Premature Birth Rates Rise Despite Efforts To Prevent Them : Shots - Health News Being born too soon puts babies at risk of lifelong disabilities, and it is the leading cause of infant death. It's not clear why the numbers are going up, but lack of health care is one factor. 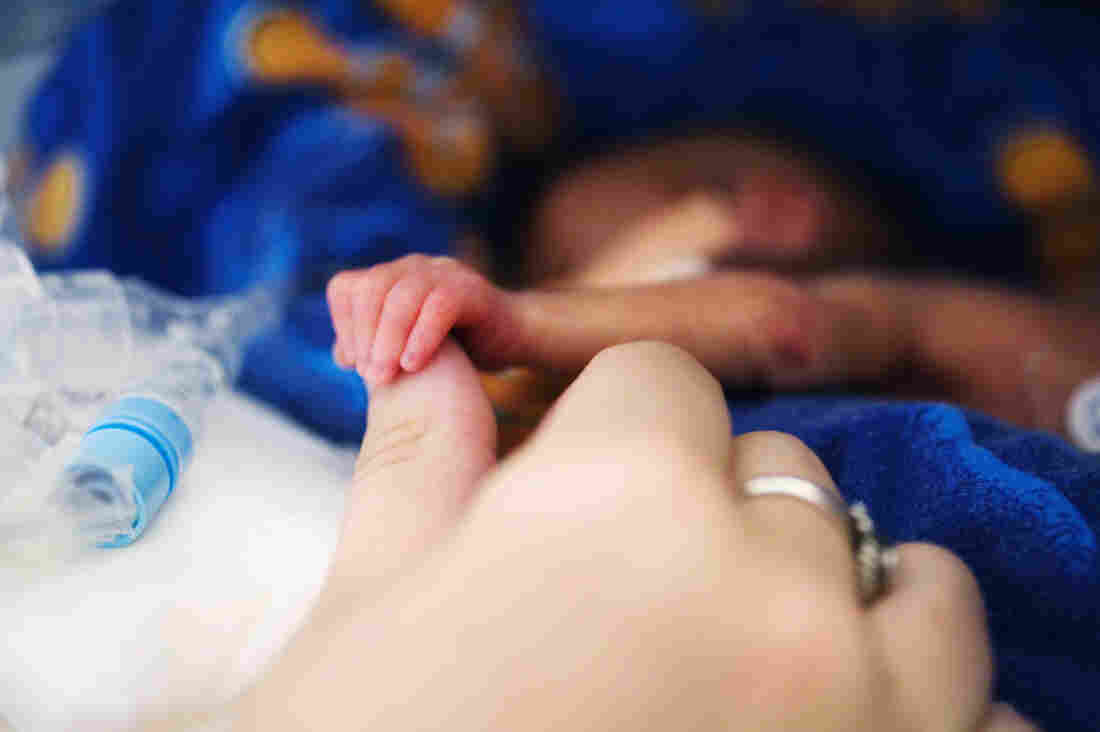 Premature birth is the leading cause of infant death in the U.S. and also can cause lifelong disabilities. Anthony Saffery/Getty Images hide caption

The number of preterm births in the United States rose in 2015 for the first time in eight years, according to data presented Tuesday by the March of Dimes. Babies born too early face a risk of health complications that can last a lifetime.

Seven states — Arkansas, Connecticut, Idaho, Nebraska, New Mexico, Utah and Wisconsin — had higher preterm birth percentages than in 2014. Four states — Vermont, Oregon, New Hampshire and Washington — earned the highest marks from the organization for having a preterm birth rate at 8.1 percent or below.

Overall, the national uptick earned the U.S. a C rating on an A to F scale. The March of Dimes researchers used data compiled by the National Center for Health Statistics and assigned grades using a formula that compared the state's current prenatal birth rate to the national average in 2014 and the organization's goal of 8.1 percent.

Despite its wealth and medical prowess in saving the lives of premature newborns, the U.S. lags behind the majority of industrialized countries and some less developed ones in preventing their early arrival. According to the latest data available from the World Health Organization, the U.S in 2010 ranked in the middle of the pack, falling behind Somalia, Afghanistan and Thailand.

Lowering the rate of preterm births to 8.1 percent would place the U.S. among countries with the lowest rates of preterm births. The March of Dimes says the U.S. should reach this goal by 2020, but the lack of progress signals to Edward McCabe, the chief medical officer of the organization, that new responses are needed. "We feel that this is a recognition that we need to work harder as a nation, that we need to focus," he says.

Preterm birth is defined as a child born before 37 weeks of pregnancy. It's the leading cause of neurological disorders such as cerebral palsy, according to the Centers for Disease Control and Prevention, and also can cause blindness, hearing problems and developmental delays. It's the single largest cause of infant death.

Preterm births cost society more than $26 billion a year, according to a 2005 report from the National Academy of Medicine.

Disparities continue across geographic, ethnic and racial lines, McCabe said. Asians and Pacific Islanders fared best, with a preterm birth rate of 8.5 percent, a full percent lower than the national average. Preterm birth rates in Hispanics and whites hovered at about 9 percent.

African-American women were most likely to give birth prematurely, with 13 percent of births affected, according to the report. States with large African-American populations and a lack of access to health care, such as Louisiana, Mississippi and Alabama, had the highest percentages of preterm births.

"We want every baby, no matter where they're born, no matter their birth ethnicity, to be born with the best start in life," McCabe says.

Breena Holmes, maternal and child health director at the Vermont Department of Health, says though she is proud of the state's low rate, she still worries that there are too many preterm babies born there. "I'm still aware that every time a baby comes early, there was a system problem that we could have worked on," she says.

The racial and ethnic divides reveal an overemphasis on medical intervention and a lack of knowledge among women, says Claire Brindis, director of the Philip R. Lee Institute for Health Policy Studies at the University of California, San Francisco. Planning for pregnancy does not start with prenatal care, she says, but with understanding risk factors and a woman's wishes regarding family planning.

The causes of preterm birth aren't clear, but risk factors include high blood pressure, diabetes, smoking and having had a previous premature birth.

While not every preterm birth can be prevented, McCabe acknowledges, a woman should be able to have the best pregnancy possible.

"Every woman is trying to do the best that she can," he says. "We need to show her what can be done."