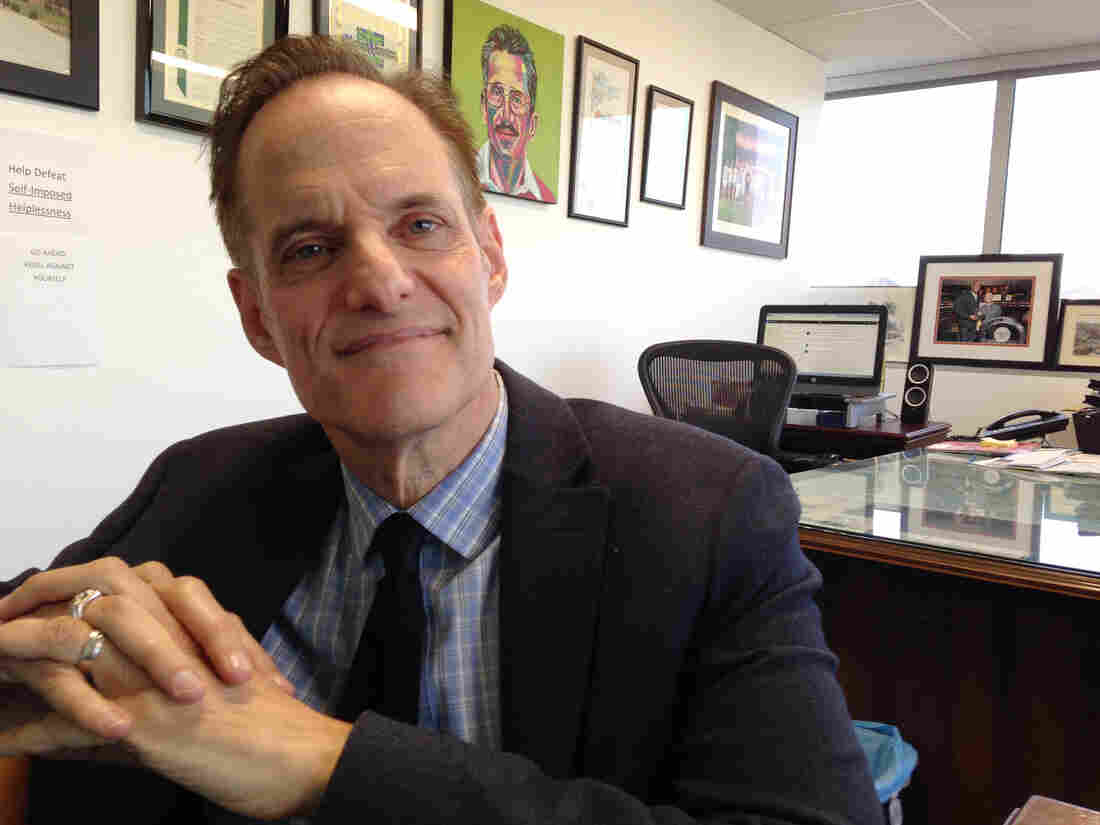 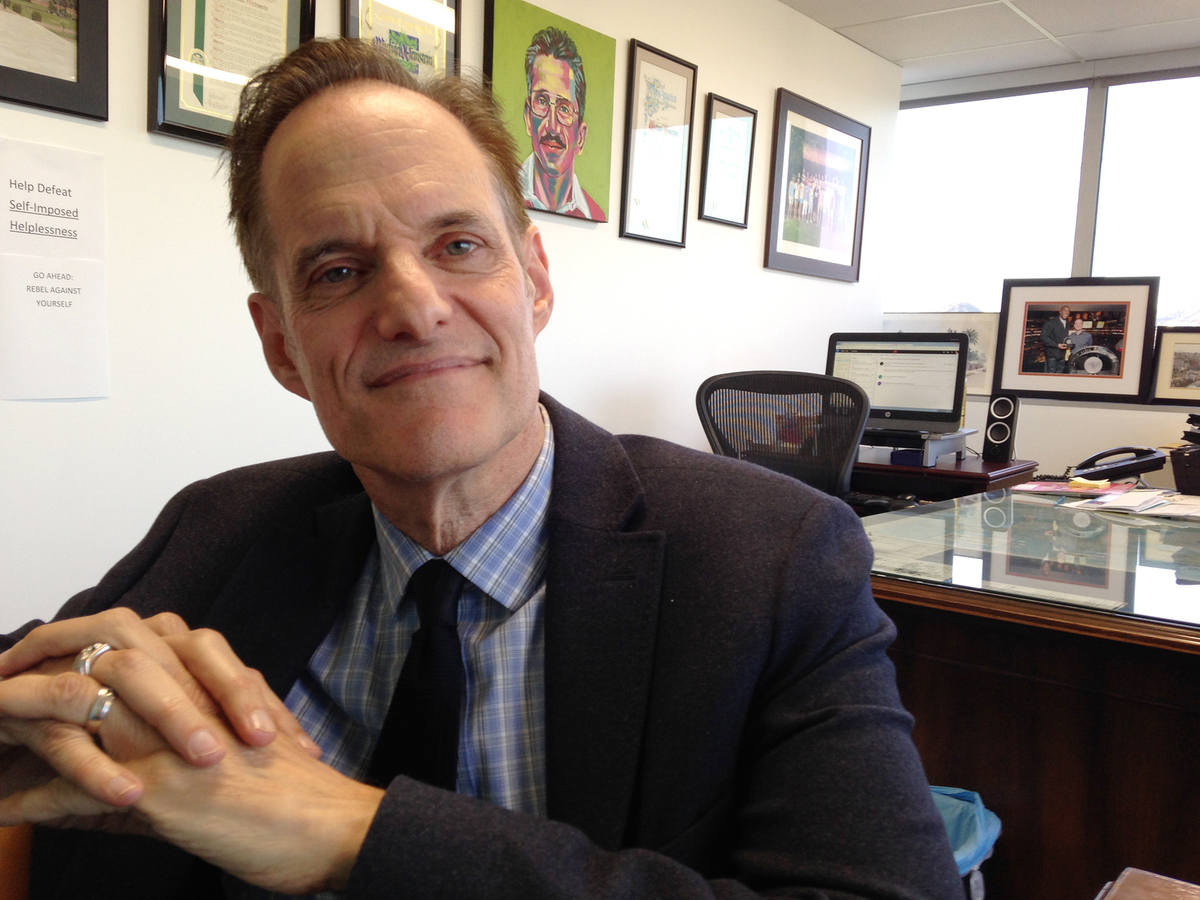 Michael Weinstein is president of the AIDS Healthcare Foundation and a longtime maverick in gay activist circles.

Updated Nov. 9, 2016: Proposition 60 was defeated by a margin of nearly 54 percent against and 46 percent in favor, with 99 percent of California precincts reporting.

When Mike Stabile first moved to Los Angeles in 2011, he was struck by a freeway billboard that showed a line of cocaine and an overturned shot glass. The caption read: "You know why. Free HIV test."

"I literally pulled over the car and was like what's going on?" Stabile remembers. "I was having a panic attack."

He describes another billboard showing two men in bed, looking nervous, and posing this question: "Trust Him?"

"As a gay man, you really have to fight against this idea that you're constantly in danger," says Stabile, who came of age during the height of the AIDS epidemic in the '80s. "Fear and stigma actually works against people getting tested."

Stabile is a documentary filmmaker, activist and a spokesperson for the Free Speech Coalition, the trade association for the adult entertainment industry, which is opposing Proposition 60.

The man behind Proposition 60 — and all those billboards — is Michael Weinstein, president of the AIDS Healthcare Foundation and a longtime maverick in gay activist circles.

The nonprofit runs pharmacies and provides HIV care in 13 states and 37 countries, and it gave away 38.5 million condoms last year. It's putting $4.5 million from its pharmacy sales into backing the Proposition 60 condom mandate. (It has also put $14.7 million behind Proposition 61, Weinstein's initiative aimed at lowering prescription drug prices in California.)

Weinstein says he's steadfastly promoting condoms when other groups seem to have forgotten them.

"It's unfashionable," he says. "I was on a panel discussion and one of the guys said, 'You're acting like our mother telling us to wear galoshes.' And my reaction was 'Yeah, somebody needs to do that!' I mean, I'm not trying to win a popularity contest, obviously."

For Weinstein, Proposition 60 is primarily about protecting adult film workers against sexually transmitted diseases — at a time when infection rates are at a 20-year high across California. But it's also another large-scale condom campaign.

"A lot of people get their sex education through these films, and I think it's sending a bad message," Weinstein says. "I don't want young people to be educated that the only kind of sex that's hot is unsafe sex."

Weinstein has long taken controversial positions, but he's often landed on the right side of history. In the 1980s, he fought lawmakers in California who wanted to quarantine AIDS patients. When nurses were afraid to touch patients, leaving them languishing in the hallways of county hospitals, he helped set up one of the first AIDS hospices, where people could die with dignity and compassion. And when AIDS drug cocktails became available, Weinstein risked bankruptcy to provide the life-extending drugs to uninsured patients.

"We decided we had a moral obligation to give them, and we paid for them and those people lived," he says.

One of Weinstein's more recent and most unpopular stances is on pre-exposure prophylaxis, or PreP, the daily pill that can prevent people from contracting HIV. Many activists consider it a powerful tool for prevention.

Weinstein doesn't see PreP that way. "It's often taken in conjunction with crystal meth and other party drugs," he says. "It's really a get-out-of-jail-free card."

He says it gives people a free pass to not use condoms and be reckless, driving a rise in other STDs, which recent studies bear out. 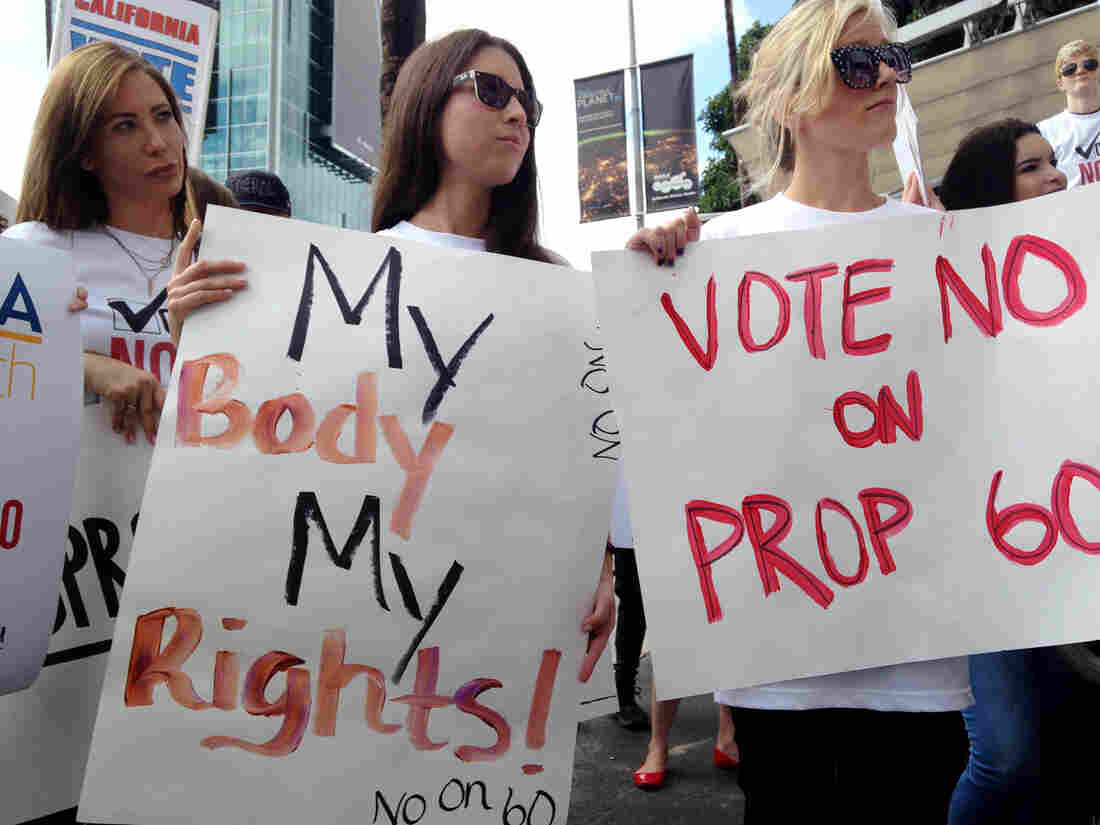 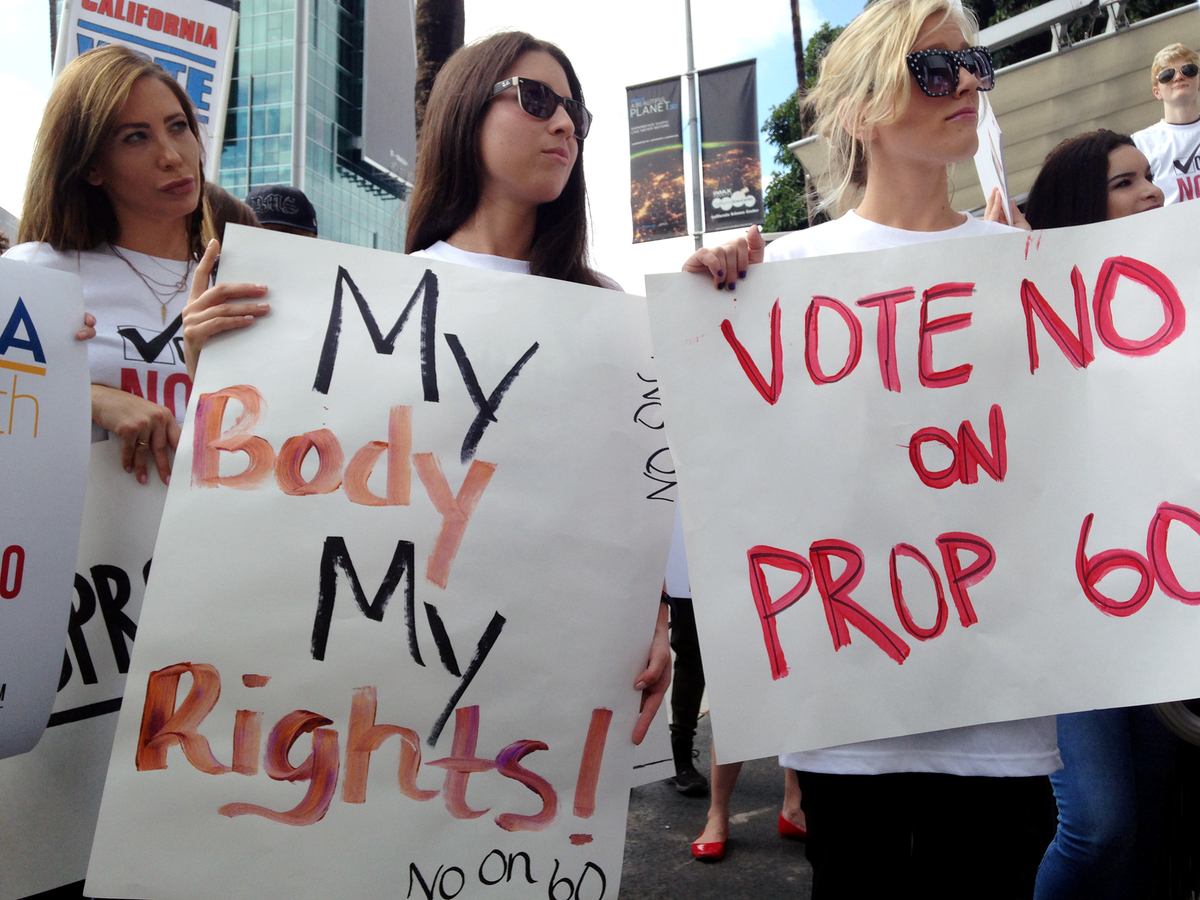 Performers from the adult film industry protest Prop 60 outside the AIDS Healthcare Foundation in Los Angeles.

But other public health groups say PreP will reduce HIV transmission and save lives, which the studies also support. "It's not helpful to have one of the largest HIV organizations in the world trivializing it or downplaying its importance," says Courtney Mulhern-Pearson, director of state and local affairs at the San Francisco AIDS Foundation.

Her group, along with AIDS Project LA, is opposed to Proposition 60, in part, because it ignores PreP. Mulhern-Pearson says Weinstein's singular focus on condoms is outdated and unrealistic.

"Condom fatigue is real," she says. "And I think that all of us are probably not realistic and not forthcoming about our condom use."

Weinstein has been fighting to mandate condoms in adult films for years. While federal and state worker safety laws technically already require producers to protect performers against STDs with condoms, the law is largely ignored and poorly enforced. Weinstein has pushed California's Division of Occupational Safety and Health, known as Cal/OSHA, to refine and clarify its regulations, without success. He's backed local measures in Los Angeles County to require condoms, which passed, but enforcement has, again, been minimal.

At every turn, the adult film industry has fought the condom mandates. Some say it would force them to make products that won't sell, or that it would drive the business underground or out of state.

In mid-October, more than a hundred adult film performers rallied outside Weinstein's office in Los Angeles to protest Proposition 60. They chanted slogans like "Our Bodies, Our Choice!" and carried signs that read "Where is Weinstein?"

"He will not hear us, he will not speak to us, but he's happy speaking for us," she says. "And that's the problem."

Weinstein defends his refusal to meet with the adult film industry.

"I'm not going to put myself in a position of debating people where all they do is call me names," he says.

Weinstein's critics have called him bombastic, a bully. They compare him with Donald Trump. They post tweets that refer to him as the "Condom Nazi."

Yet it's clear that the criticism bothers him.

"He's been hurt," says Sharon Raphael, an old friend and fellow activist. "I know that it hurts him."

Still, she adds, everyone knows he's a force to be reckoned with.

"When most people would be down and out, strike three, he'd get up again," she says. "He never gives up. Ever."