Accessibility links
Naproxen And Ibuprofen Problems Seen At High Doses In Study : Shots - Health News A large study alleviates concerns that Celebrex boosts the risk for heart attacks and strokes as much as Vioxx. But the findings raise some concerns about prescription doses of ibuprofen and naproxen. 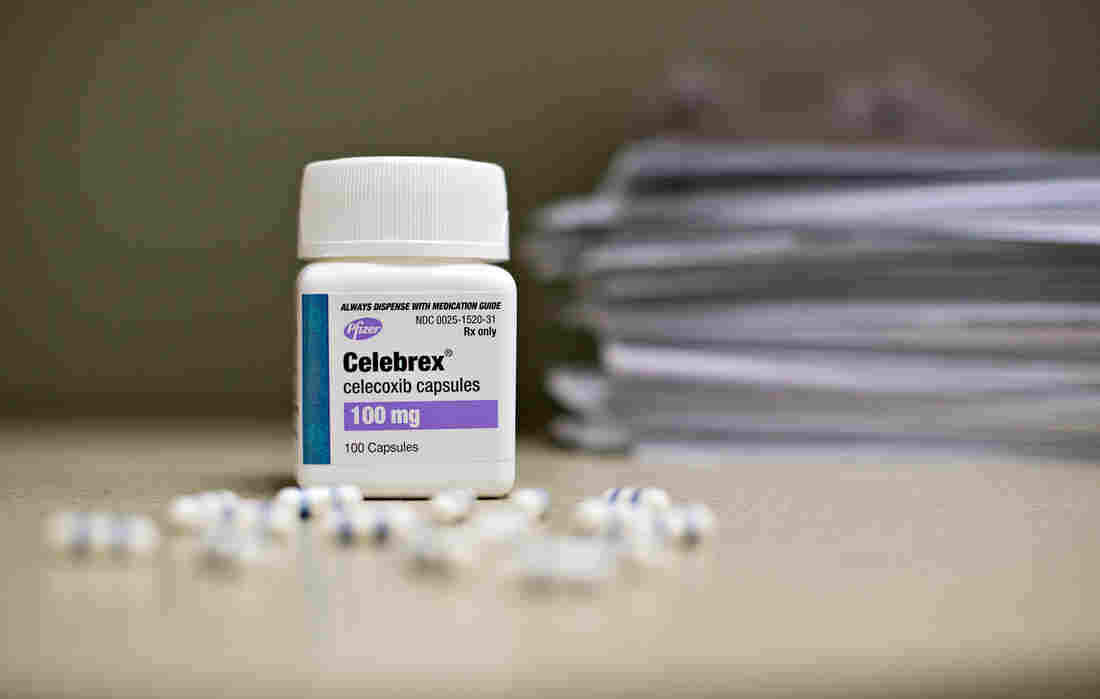 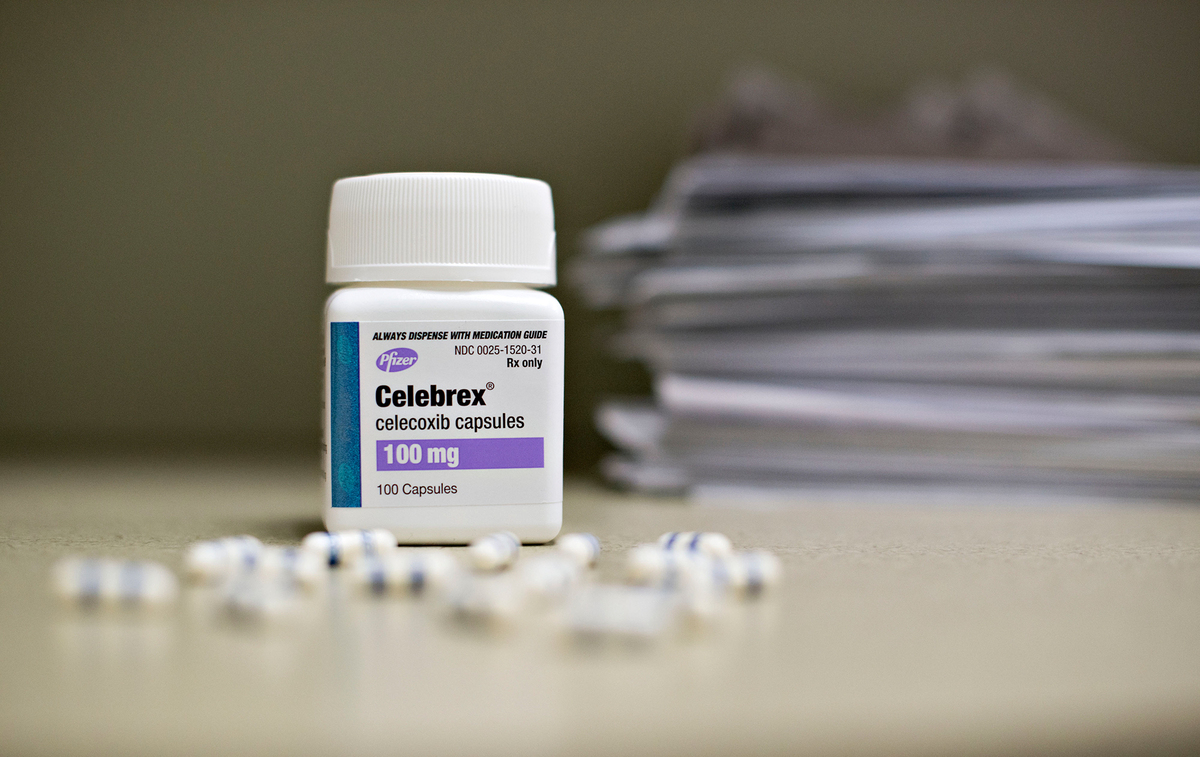 Pfizer's Celebrex fared well in a safety study that compared the pain reliever with ibuprofen and naproxen.

A large study has produced reassuring evidence about a drug that millions of people use to alleviate pain from arthritis and other ailments.

The study found no evidence that the drug Celebrex, or generically, celecoxib, poses any greater risk for causing heart attacks and strokes than two other widely used pain relievers.

"What we found was surprising," says Steven Nissen, a cardiologist at the Cleveland Clinic who reported the results Sunday at an American Heart Association meeting in New Orleans.

Doctors have been concerned about Celebrex for more than a decade because it is very similar to another pain reliever, Vioxx, which was pulled from the market in 2004 after being linked to heart attacks and strokes.

Celebrex "didn't share the risks that were seen with Vioxx," says Nissen, whose findings were also published online by the New England Journal of Medicine.

Nissen and other heart specialists cautioned that Celebrex can increase the chance of cardiovascular complications. But it doesn't appear to boost those odds nearly as much as Vioxx, or even as much as other painkillers thought to be safer. Both Vioxx and Celebrex are so-called Cox-2 inhibitors, which act by blocking an enzyme involved in inflammation.

Moreover, the study suggests Celebrex may be less risky than other so-called nonsteroidal anti-inflammatory drugs, or NSAIDs, in other ways. For example, Celebrex appears to pose less of a risk of causing kidney problems.

"It is very reassuring," says Milton Packer, a cardiologist at Baylor University who was not involved in the study. "I think what we'll see is a greater confidence in the use of drugs like Celebrex. I think people will turn to it now more frequently."

But others cautioned that all the drugs tested remain risky, especially for people with heart disease. "It's reassuring that it's not as bad as Vioxx, but it's not a recommendation to take the medication," says Dr. Mary Norine Walsh, the president-elect of the American College of Cardiology.

After Vioxx came on the market in 1999, it quickly became a blockbuster used by millions of people because it was designed to cause fewer gastrointestinal complications than existing NSAIDs.

The Food and Drug Administration allowed continued sales of Celebrex even though it was very similar. But the agency ordered Pfizer Inc., the company marketing Celebrex, to study the drug's safety. In 2005, however, Pfizer withdrew Bextra, another Cox-2 inhibitor, at the FDA's request.

Celebrex is used by an estimated 2 million Americans each year for arthritis, menstrual cramps and other aches and pains.

Higher, prescription doses of ibuprofen and naproxen were more likely than Celebrex to cause digestive system problems, such as ulcers and bleeding, the researchers found.

That wasn't a surprise. Celebrex and Vioxx were designed to be easier on the digestive system than the existing NSAIDs. But some other risks were surprising, Nissen says.

Compared with Celebrex, patients taking ibuprofen were more likely to experience kidney problems, including kidney failure and the need for dialysis.

All these drugs are known to carry some risks to kidney function, but the risk from ibuprofen was higher than expected, Nissen says.

There was also a hint that naproxen and ibuprofen may pose more of a risk of causing cardiovascular complications that Celebrex. Nissen stresses, however, that that finding was only borderline-statistically significant for ibuprofen.

In addition, there was an even weaker hint that naproxen might increase the risk for death for any reason, compared with Celebrex. But that wasn't statistically significant either.

It means those risks could have been statistical flukes. But they do warrant further investigation, he says.

"What is so surprising about it is that most authorities have believed that if there was a drug that was the safest, it was naproxen," Nissen says. "So we were pretty surprised that there was this borderline significant increase in all-cause mortality with naproxen."

Celebrex turned out to be the least likely of the three drugs to increase the risk for cardiovascular complications. The risk of dying, suffering a stroke or having a heart attack among patients taking Celebrex was 2.3 percent during a 30-month period, compared to 2.5 percent for naproxen and 2.7 percent for ibuprofen.

Nissen stresses that all the patients in the study took doses of these drugs available in the prescription formulation — not the much lower doses most people take when they buy them without a prescription and use them occasionally.

"I don't want the public to think that if you take an occasional ibuprofen or naproxen that you're going to have kidney failure or you're going to die," Nissen says. "We didn't study that. We studied daily doses in arthritis patients [taking] ... high doses of these drugs."

But the findings should encourage people who need pain relief to take the lowest dose of the drugs for the shortest time possible.

"If you twist your knee and you hurt, I want people to take medicines for pain relief," Nissen says. "But when they're better, try to get off the drugs and not take them every day and not take them in very high doses."

"There's probably a risk of all of these drugs, especially at high doses," Packer says. "The question is: If you need these drugs for pain, which is the safest? Right now, based on this study, it appears Celebrex has advantages."

Several experts pointed out that the study has some flaws. The dose of Celebrex tested was relatively low, for example, and a significant number of subjects dropped out of the study, which raises questions about the reliability of the findings.