Accessibility links
'Minibrains' Could Help Drug Discovery For Zika And For Alzheimer's : Shots - Health News Each lab-grown cluster of human cells fits on a pin's head, but contains some of the cell types and circuitry of a real brain. The structures already are offering insights into how Zika attacks. 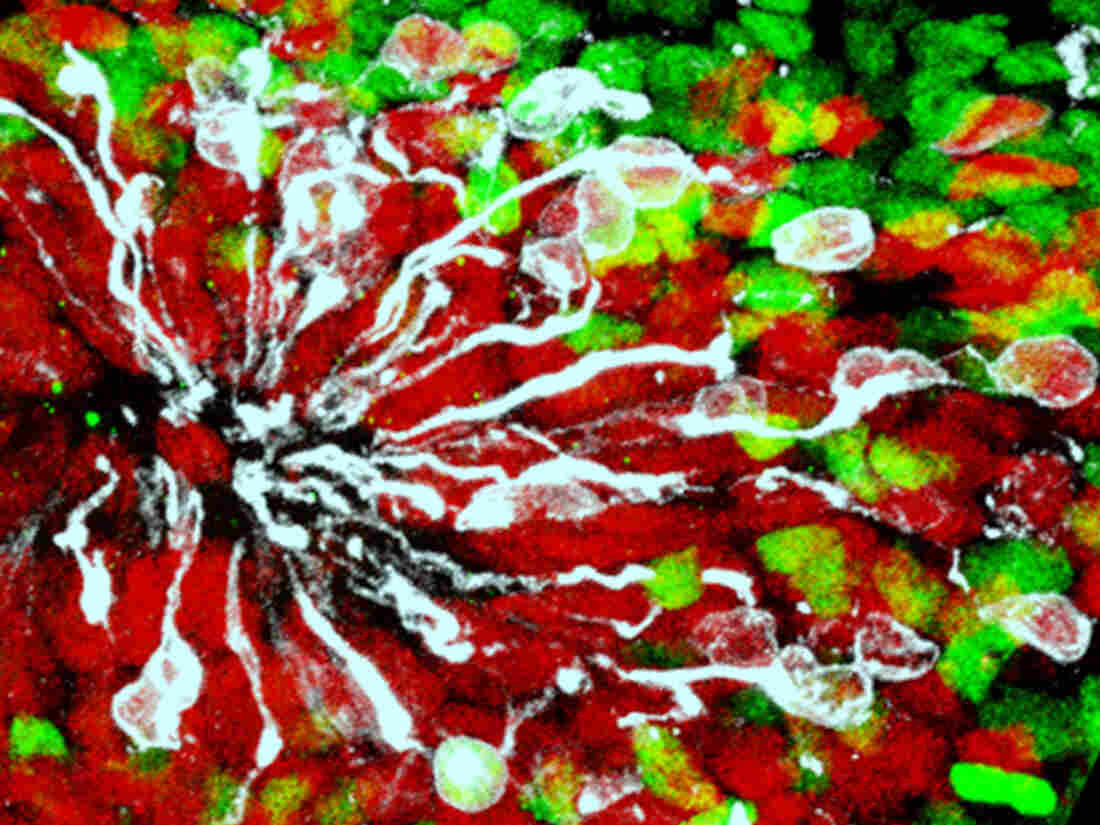 This image is from lab-grown brain tissue — a minibrain — infected by Zika virus (white) with neural stem cells in red and neuronal nuclei in green. Courtesy of Xuyu Qian and Guo-li Ming hide caption 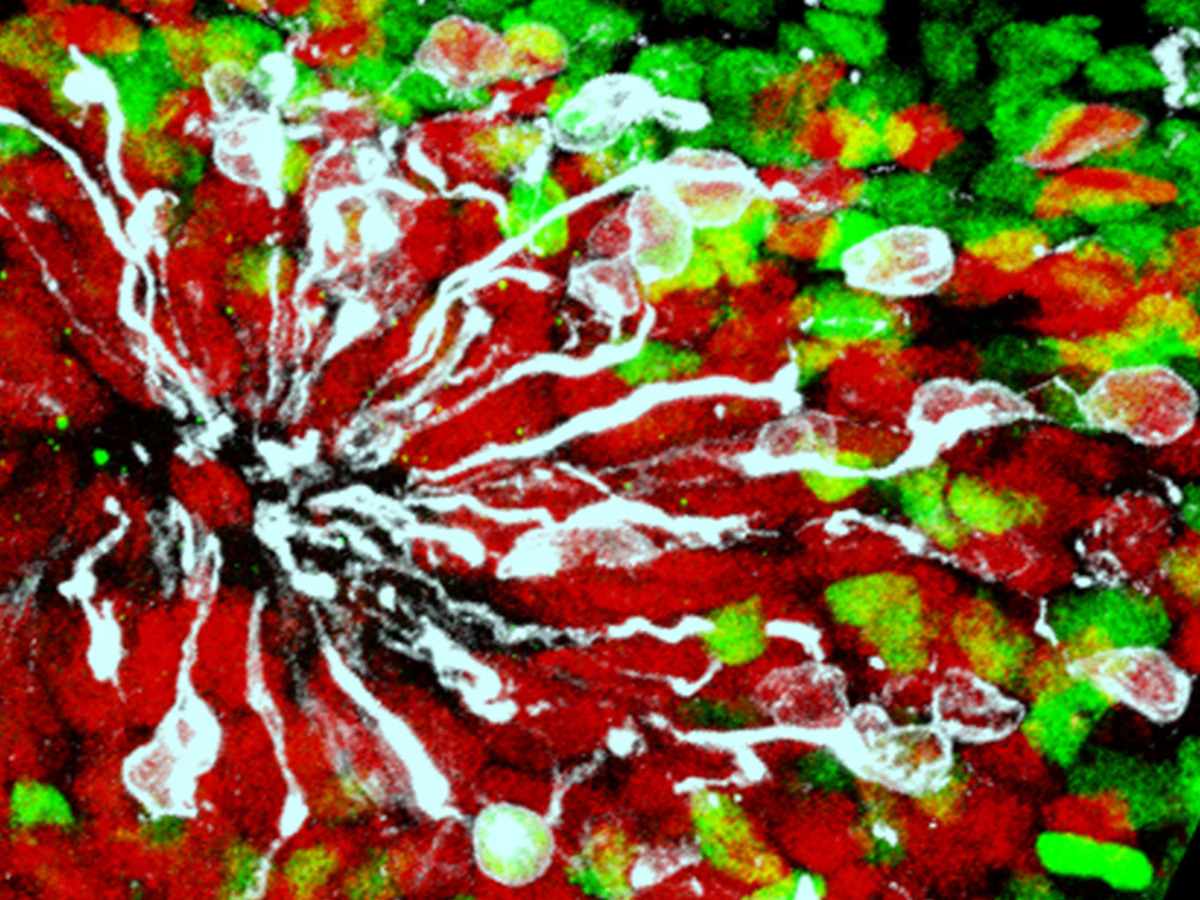 This image is from lab-grown brain tissue — a minibrain — infected by Zika virus (white) with neural stem cells in red and neuronal nuclei in green.

Some tiny clusters of brain cells grown in a lab dish are making big news at this week's Society for Neuroscience meeting in San Diego.

Known as "minibrains," these rudimentary networks of cells are small enough to fit on the head of a pin, but already are providing researchers with insights into everything from early brain development to Down syndrome, Alzheimer's and Zika.

At a Sunday press conference at the neuroscience meeting, researchers said minibrains are helping them figure out how the Zika virus can disrupt human brain formation in the early stages of fetal development.

Minibrains are highly organized structures that actually start out as human skin cells. They are then coaxed in the lab to become neural stem cells, then to differentiate into some of the different types of cells found in a real brain.

What makes these lab-grown structures so useful is that they replicate part of the cell diversity and connectivity of the human brain, said Dr. Thomas Hartung, a researcher and experimental toxicologist at the Johns Hopkins Bloomberg School of Public Health in Baltimore.

"These cells are communicating," Hartung said. "These neurons are talking to each other."

As a result, the minibrains can help researchers answer questions that couldn't be answered by studying animal brain tissue. "We need human systems to tell us about humans, and that's why this is such a big step forward," Hartung said.

The first minibrains were developed a few years ago by scientists in Europe. Since then, researchers at a handful of institutions around the world have begun cranking out these experimental structures.

At Johns Hopkins, Hongjun Song has been working to streamline the process and make minibrains that are closer to the real thing in the way they respond to viruses, for example.

When I visited Song's lab recently, he took me to a small, windowless room at Hopkins that has a powerful air filtration system, to show me the result of his team's effort. He opened an incubator the size of a dorm fridge and pointed to a device inside that was only slightly larger than a cell phone.

The device contains a complete factory for these organoids, he said; the system was built by three high school interns using a 3-D printer.

The lower half looks like a miniature muffin pan with a dozen separate compartments. "We can grow up to 10 minibrains in each one," Song said.

The top half resembles a mechanized Lego project. A small motor powers gears connected to a dozen plastic shafts. They gently stir a precise mixture of cells, nutrients, and growth factors in each compartment.

The minibrains that emerge after several months in the incubator are barely big enough to see with the naked eye, said Dr. Guo-Li Ming, a professor of neurology at Hopkins who is married to Song and collaborates with him on this research.

"It's basically like a ball of cells clustering together," she said. "But if you open it up you really see something very similar to the early embryonic brain."

Though it has only a tiny fraction of the number of cells of an actual brain, a minibrain grows much the way a real brain does during early pregnancy. And that has helped researchers solve a medical mystery involving the Zika virus.

When Zika began making headlines last year, scientists suspected the virus could interfere with brain development in the womb. "But you can't study that in a mouse," Ming said, because mice have very few of the developing brain cells that are most vulnerable to Zika infection.

A student suggested that Ming and Song use minibrains to figure out what was happening. So the couple contacted Hengli Tang, a research biologist they knew at Florida State University, who was studying the Zika virus.

That call led to studies of minibrains that showed precisely how the infection was attacking certain neural cells, especially at a point in development equivalent to the first trimester of pregnancy. "It was turning [these cells] into a viral factory," Song said.

Members of the Hopkins team are presenting details of their Zika findings this week at the neuroscience meeting, and are already planning minibrain studies of other disorders, including autism, schizophrenia and Alzheimer's.

Elsewhere during the neuroscience meeting, scientists are presenting minibrain research as a model in brain cancer and in developmental disorders, including Down syndrome and Rett syndrome.

Minibrains' greatest potential, though, may be for testing new drugs for brain disorders, Hartung said. Drug testing with animals has often proved misleading because animal brains just aren't like human brains, he explained.

"One company after the other failed on things like stroke, multiple sclerosis, [and] also neurodegenerative diseases like Alzheimer's and Parkinson's," Hartung said.

Those failures involved drugs that worked when tested in animals, but failed on people, Hartung said. So he has begun working with pharmaceutical companies to see whether minibrains might offer a better model.

One obstacle to the widespread use of minibrains in research may be public acceptance of the idea that scientists should be growing "brains" in the lab. But people would be less concerned, Hartung said, if they understood the differences between these very small, lab-grown structures and a real brain.

For one thing, minibrains stop growing when they still have only about 20,000 cells. A human brain has many billions. And these clumps of cells, he explained, have no way of learning or becoming conscious.