Accessibility links
Cancer Detection: A Shrimp's Eyes Might Help : Shots - Health News Cancer cells, it turns out, reflect light in a particular, polarized way that mantis shrimp can see. A tiny camera based on the shrimp's eye might help doctors better visualize tumors during surgery.

Mantis shrimp, a group of aggressive, reef-dwelling crustaceans, take more than one first-place ribbon in the animal kingdom. Outwardly, they resemble their somewhat larger lobster cousins, but their colorful shells contain an impressive set of superpowers.

Now, scientists are finding that one of those abilities — incredible eyesight — has implications for people with cancer that are potentially lifesaving.

"They have these ridiculous eyes that sense so many things at once," says Sam Powell, a doctoral student in computer science and engineering at Washington University in St. Louis. "It's been very interesting figuring out what we can do with that, that helps out humans."

Powell is part of a collaborative team of engineers and wildlife biologists, co-led by Viktor Gruev at the University of Illinois at Urbana-Champaign. They're working on a set of imaging technologies inspired by the ability of the mantis shrimp to detect polarized light. With the camera the team is developing, Gruev says, cancer surgeons might one day be able to much more clearly see the margins of the tumors they need to remove.

Mantis shrimp come in two varieties. There are the "smashers" and the "spearers," named for their attack modes when hunting prey. With their spring-loaded, weaponized legs, these predators can crack a snail shell or harpoon a passing fish in a single punch. 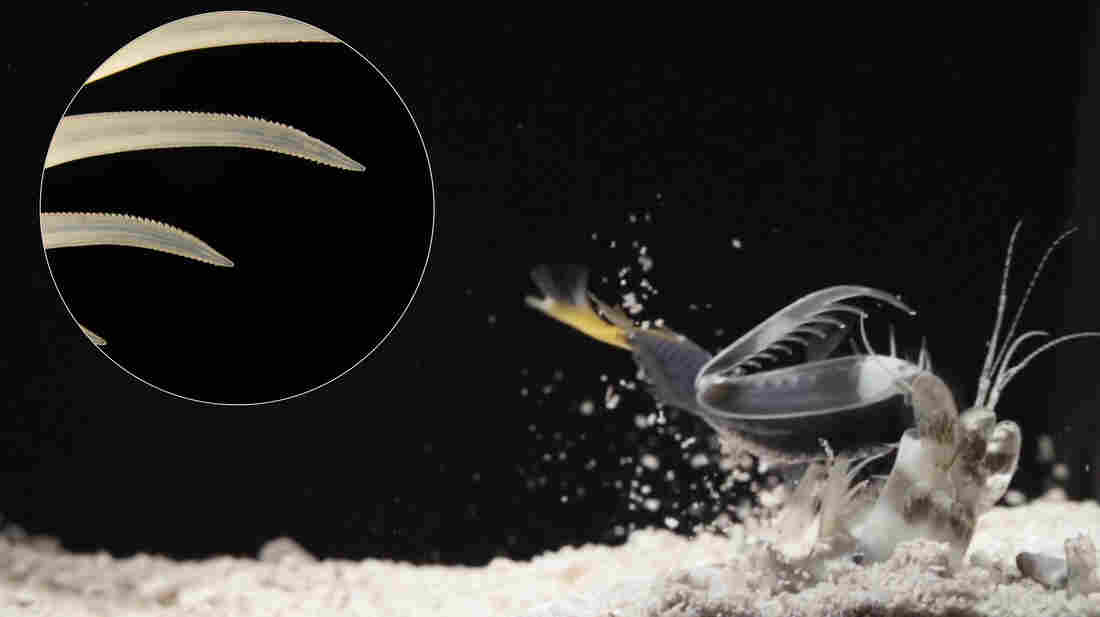 One kind of mantis shrimp impales its prey with legs that have serrated edges. KQED hide caption 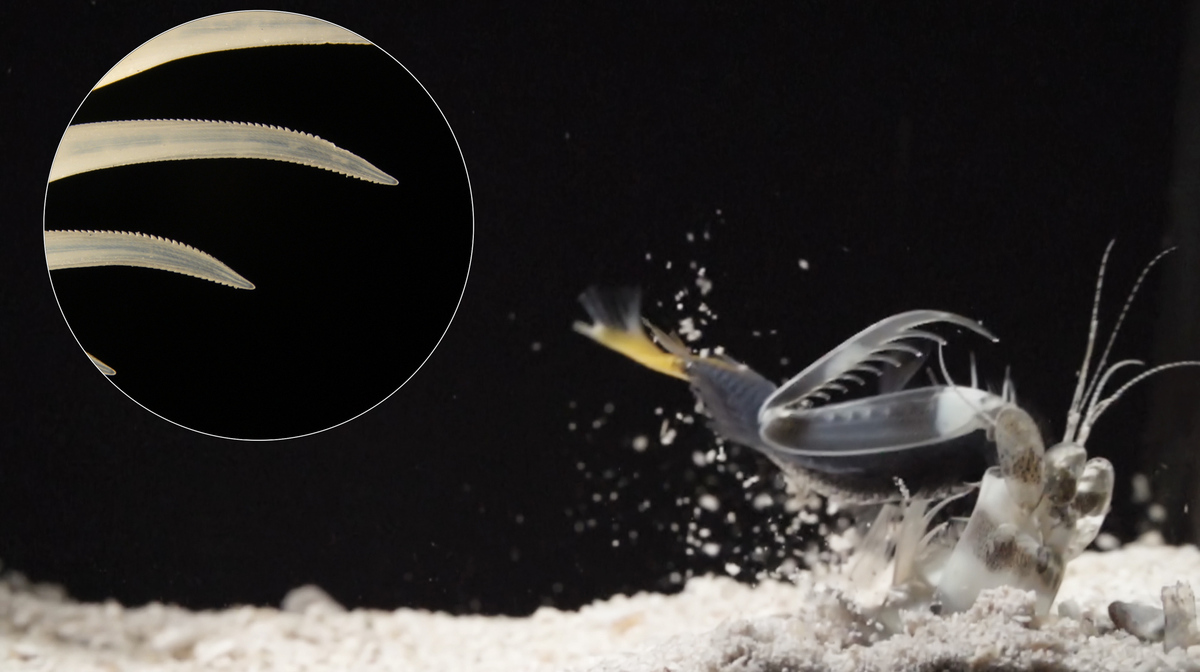 One kind of mantis shrimp impales its prey with legs that have serrated edges.

The speed of these attacks has earned the mantis shrimp a world record: fastest strike in the animal kingdom. At 30 times faster than the blink of an eye, the attack is so swift that it can vaporize nearby water molecules, producing bubbles where no bubbles should be.

The mantis shrimp's powerful punch is aided by its world-class eyesight. Like the eyes of most crustaceans and insects, the mantis shrimp's are made up of thousands of light-trapping facets — picture a fly's eye — known as ommatidia.

What's unique to the mantis shrimp is the way the ommatidia of each eye are divided into three sections, each moving independently. That means mantis shrimp vision is able to triangulate distance using up to six images in the brain.

"That's important for an animal that makes its living smashing and spearing things," says Roy Caldwell, a mantis shrimp specialist in the integrative biology department at the University of California, Berkeley.

But the power of the mantis shrimp eye doesn't end there. Mantis shrimp can perceive an attribute of light that eludes our naked eyes: polarization.

Sunlight is messy — a jumble of wavelengths moving in all directions at once. But some surfaces — say, the scale of a fish, or a pair of polarized sunglasses — have a way of changing the light they reflect or transmit, organizing it so it moves in a single plane. 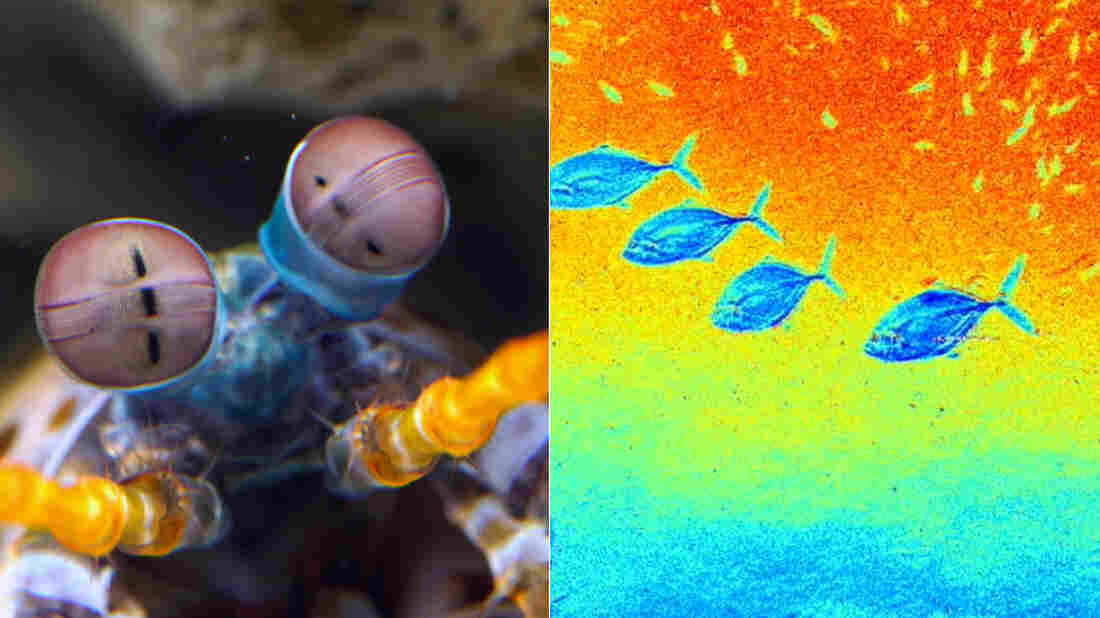 Mantis shrimp eyes can tell where polarized light is and where it isn't, which helps them detect fish scales, crabs and other prey in seawater. KQED hide caption 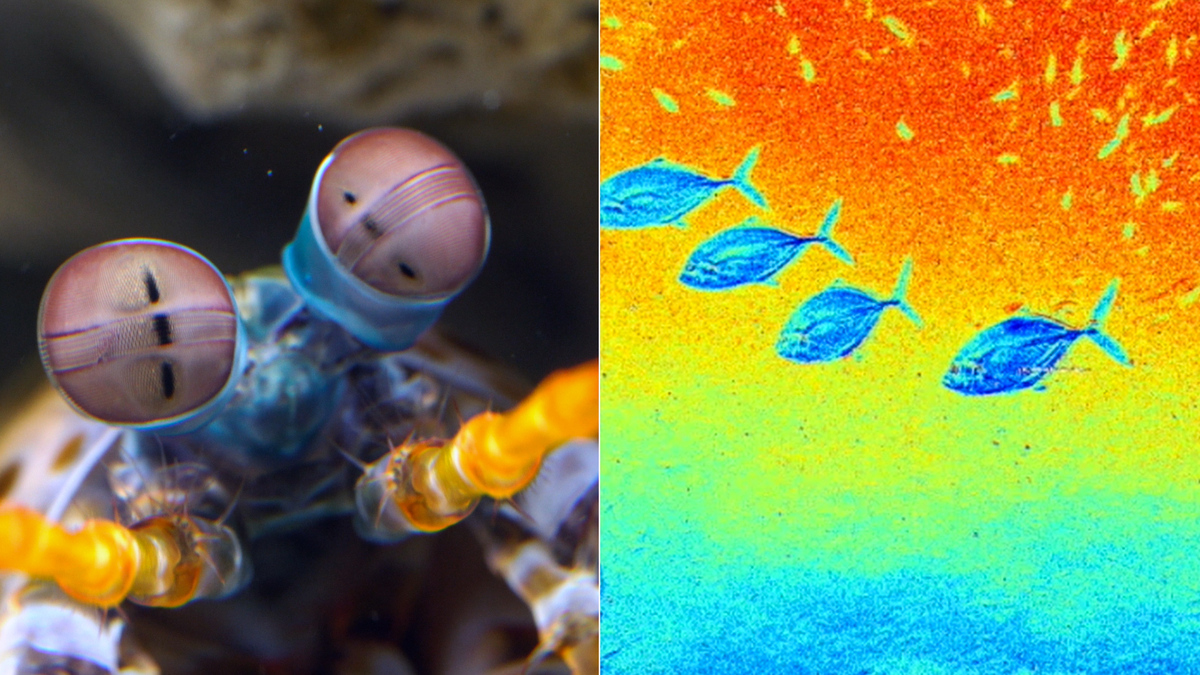 Mantis shrimp eyes can tell where polarized light is and where it isn't, which helps them detect fish scales, crabs and other prey in seawater.

We humans can't really tell this is happening. But the mantis shrimp eye has extra sensors that let it analyze the angle of the light wave. That means the shrimp is able to make out where in its neighborhood light is being polarized, and where it isn't. So the polarizing surfaces of fish, crabs and other potential prey look more vivid against the less polarized backdrop of water.

This ability to detect and visually capitalize on polarized light "is very common in animals," says Thomas Cronin, a research biologist and professor at the University of Maryland, Baltimore County. "In fact, we're among the few that don't use polarized light very much, if at all."

What's unique to some mantis shrimp is their ability to perceive yet another, much more rare variety of polarized light. This "circular" polarized light moves not in a flat plane, but in a twisted one that spins through space like a helix.

Circular polarized light is part of what makes 3-D glasses and DVD technology work. Mantis shrimp not only see this kind of polarization, they broadcast it. Parts of the male's body function as a circular-polarizing surface, flashing a secret code that's only visible within the species.

"It gives them an incredibly private channel of communication that no other animal can see," says Caldwell.

Males display these body parts during courtship to attract females. Other research has shown that adult males flash their polarizing parts to alert other males to their presence inside a burrow, a warning that the homeowner is armed and dangerous. 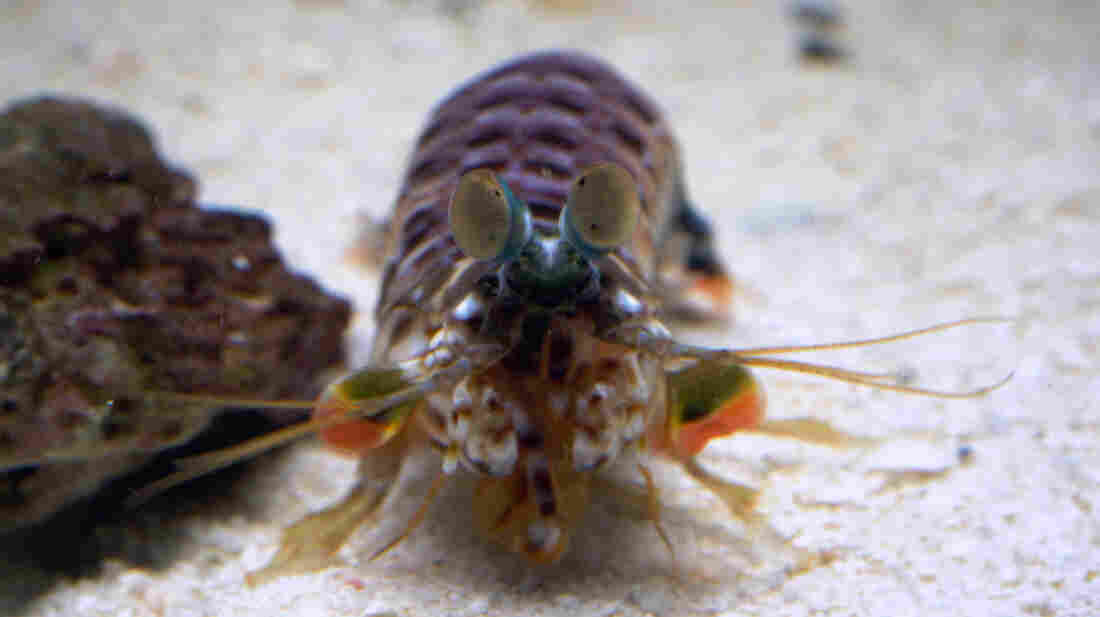 A male mantis shrimp reflects a particular type of polarized light from the surface of parts of its body. That reflected light serves as a secret signal that only other shrimp can see. KQED hide caption 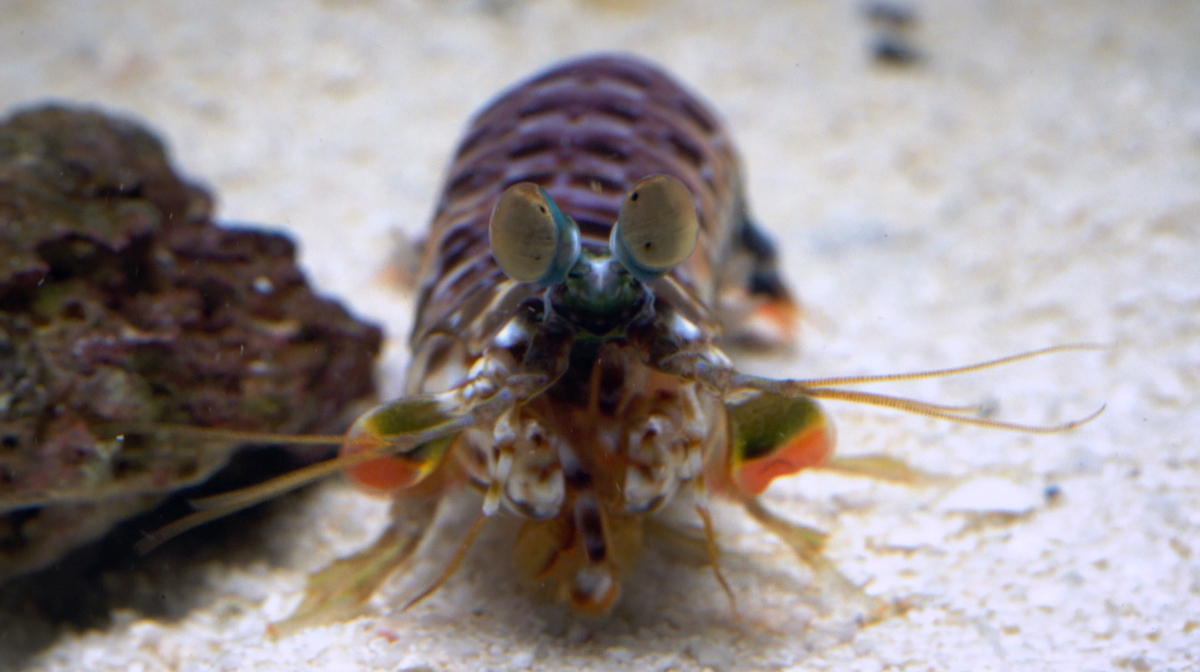 A male mantis shrimp reflects a particular type of polarized light from the surface of parts of its body. That reflected light serves as a secret signal that only other shrimp can see.

Inspired by the mantis shrimp's superlative eyesight, the group of researchers are collaborating to build polarization cameras that could be used to help diagnose and remove cancerous tumors.

Doctors have long known that, at the cellular level, fast-growing cancer cells are disorganized in comparison with healthy cells. Because of the structural differences, it turns out, some diseased tissues also reflect polarized light differently from healthy tissue.

These differences can show up early with cancer — before other symptoms or signs.

"Looking at nature can help us design better and more sensitive imaging techniques," Gruev says. His team's cameras, which are small enough for endoscopic use, can see polarization patterns on the surfaces of human and animal tissue.

In one study, Gruev and his team tested their polarization cameras in mice, looking for signs of colon cancer. Traditional colonoscopy techniques employ black-and-white images to look for abnormal shapes, such as polyps. But sometimes, cancerous tissue in the colon is flat, blending in with healthy tissue.

Gruev's camera, in contrast, successfully converted polarization data into color images in real time in the mice studies, revealing where the healthy tissue ended and the diseased tissue began.

At this point, doctors have no way to confirm during the operation that they've completely removed a tumor. One day, Gruev believes, polarization imaging will be part of every surgical oncologist's toolkit, bringing the power of a mantis shrimp's eye to the operating room.

"It's kind of the cancer moonshot," Gruev says of his hopes for the diagnostic technology. "Right now, we are still detecting cancer way too late in the game."

This post and video were produced by our friends at Deep Look, a wildlife video series from KQED and PBS Digital Studios that explores "the unseen at the very edge of our visible world." KQED's Elliott Kennerson is a digital media producer for the series.