Accessibility links
Deaths Involving Fentanyl Keep Climbing : Shots - Health News Law enforcement is scrambling to get ahead of the opioid, which is far more chemically potent than heroin. Most illegal fentanyl is made in China. As soon as one version is outlawed, another pops up. 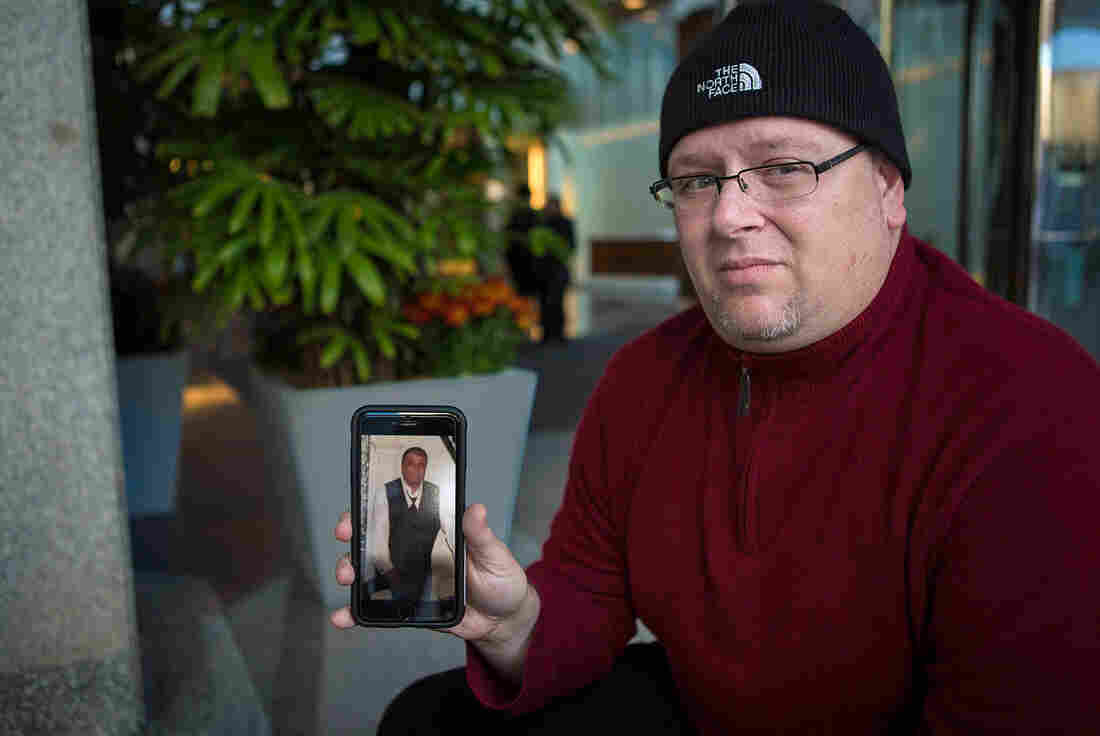 Anthony Salemi, of Everett, Mass., holds a photo of his brother Joe, who died from an overdose of fentanyl-laced heroin earlier this year. Jesse Costa/WBUR hide caption 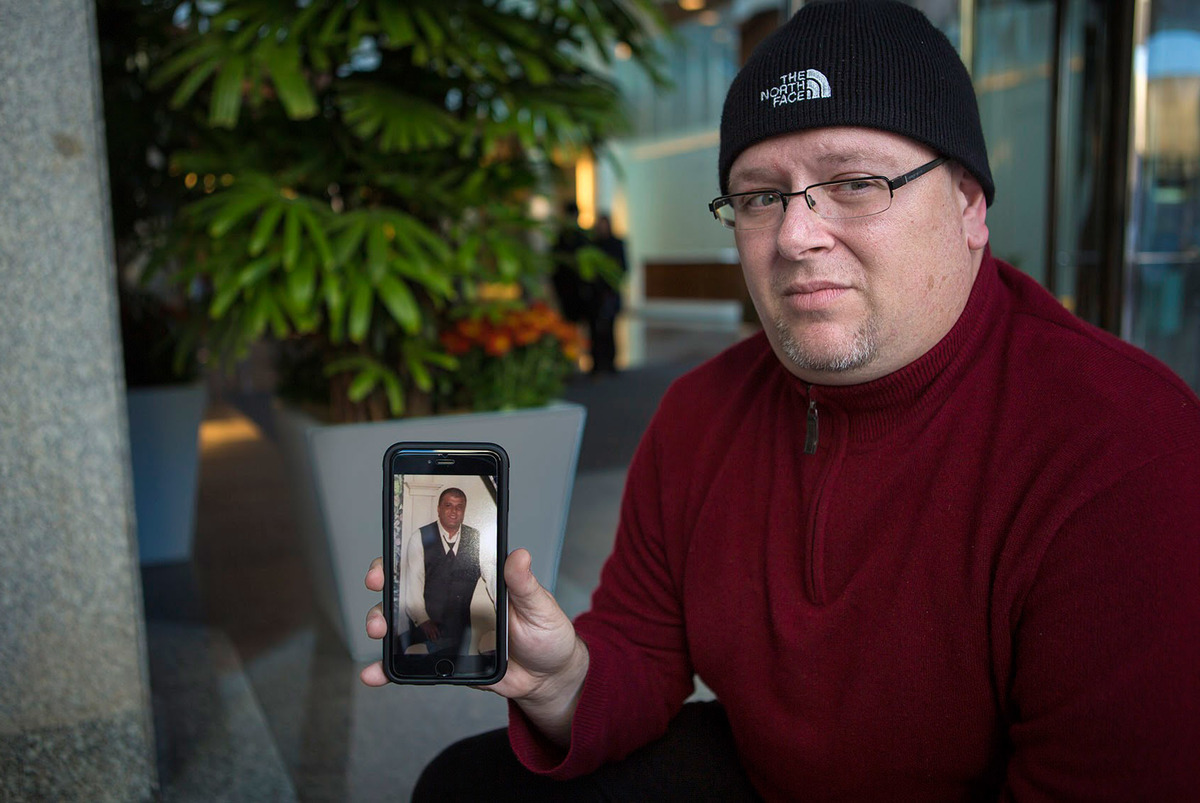 Anthony Salemi, of Everett, Mass., holds a photo of his brother Joe, who died from an overdose of fentanyl-laced heroin earlier this year.

In mid-August, an affable, 40-year-old man from Everett, Mass., overdosed at his mom's home after almost 25 years of heroin use. Joe Salemi had overdosed before, but this time couldn't be revived. Salemi's brother, Anthony, says he was pretty sure when his brother died that there must have been something besides heroin in the syringe. The medical examiner later confirmed it.

"I knew, deep in my mind, it was going to be the stuff that everyone's talking about now — fentanyl," Anthony says. "Because I never thought straight heroin would kill him."

Anthony Salemi was familiar with fentanyl. He'd been prescribed the powerful painkiller after surgery in 2006. Anthony had warned his younger brother about reports that dealers were adding an illicit version of the drug to heroin, sometimes promising a more intense high. Fentanyl is more than 50 times more potent than heroin, according the Centers for Disease Control and Prevention.

But people like Joe rarely know for sure if there is fentanyl in the tiny plastic bags of illegal powder they buy — or how much. Just a few grains of pure fentanyl, doctors say, is enough to kill most users. In Massachusetts, 75 percent of the people who overdosed this year tested positive for the drug.

The Obama administration agrees that the increasing supply of fentanyl on the street is a major challenge and says agencies are doing a lot. But reducing the supply is complicated.

Fentanyl is a synthetic opioid, constructed with lab chemicals — unlike heroin or morphine, which start with the opium sap of a poppy plant. Drug enforcement agents say clandestine labs across China are the main source of the illegally sold fentanyl.

Producers then ship the drug to Mexico, where drug cartels mix it into heroin or press it into blue, pink or white tablets that look like prescription pills for anxiety or pain. The powder or pills are delivered to dealers, or directly to users, via the Internet or darknet, an online area used for illegal purchases.

"Synthetic drugs are a real winner because they are easy to make, and they're cheap to produce," says Kara McDonald, director of policy, planning and coordination at the international narcotics and law enforcement bureau of the U.S. Department of State.

"They're not dependent on a season or the weather like a plant-based drug," McDonald says. "And with the distribution system — through mail order — they can be delivered directly to the door in some cases. Like a pizza."

The profit margin is huge, says Drug Enforcement Administration spokesperson Russ Baer. He says it costs from $3,000 to $4,000 to produce a kilo — 2.2 pounds — of fentanyl. The fentanyl is then cut with cheap fillers to make pills, or mixed into bags and fraudulently sold as pure heroin.

"Drug traffickers involved in the wholesale distribution of those products can yield close to $1.5 million off that one kilogram," says Baer.

The DEA has six agents who operate out of Beijing and work closely with China's Ministry of Public Security, Baer says. Chinese officials established controls on 116 new chemicals last year, including 19 that have much the same molecular structure as fentanyl. Baer says that helped reduce the supply of some of these designer analogs of the drug. (Though each analog drug has a slightly different chemical structure from fentanyl, they work much the same way in the body.)

And in September, the DEA moved to declare another fentanyl analog called U-47700 illegal. But the producers always seem to be one step ahead of enforcement agencies, Baer says.

"Once we control a substance, whether here in the U.S. or in China, for example," he says, "the drug manufacturers simply change a molecule, tweak a molecule, in an attempt to circumvent the law."

Keeping up with the inventive chemists sounds nearly impossible.

If a drug compound is similar to fentanyl, or if it produces the same physiological effect, the DEA can file trafficking charges here in the U.S. But these variations are not illegal in many countries. McDonald says the State Department is working, through the United Nations and with individual nations, to make sure police everywhere can identify new drugs and prosecute dealers.

The international control system is only able to detect, process and outlaw about 10 new psychoactive substances a year, McDonald says. "It doesn't take a mathematician to identify that we have a real challenge here."

To get in front of production, the State Department and a group of U.S. senators asked the United Nations in October to add to the list of tightly controlled substances two key ingredients used to make fentanyl. A decision is expected next year.

McDonald and Baer at the DEA say slowing demand for illicit uses of fentanyl and other opioids has become an urgent priority. The office of the U.S. Surgeon General this week also issued a report on the growing problem of substance abuse and the need for more widespread implementation of well-recognized, evidence-based treatment programs to address the problem.

In an interview with NPR's Steve Inskeep on Morning Edition Thursday, Surgeon General Vivek Murthy called addiction "a chronic disease of the brain."

"We need to treat it with the same urgency and compassion that we do any other illness," Murthy told Inskeep.

But some lawmakers, physicians and families who've lost loved ones say the Obama administration has done too little too late to tackle the epidemic.

U.S. Sen. Ed Markey, a Democrat from Massachusetts, says it's time to make the illegal production and trafficking of fentanyl the top policy issue in relations with China and Mexico.

"Many more people are going to die from this than [from] any threat from nuclear weapons or any devastation that's caused by an imbalance in trade," Markey says.

Baer says trying to stop the supply of opioids is part of the solution, but so is tackling demand by addressing addiction as a disease.

"The community needs to embrace these folks, create treatment opportunity," Baer says. "We need to educate the public. It's the No. 1 priority and it represents a public health crisis that all of us must work together to try to resolve."

The CDC offers a sobering perspective. While about 78 Americans will die today after an overdose, another 580 will try heroin — or what they think is heroin — for the first time.