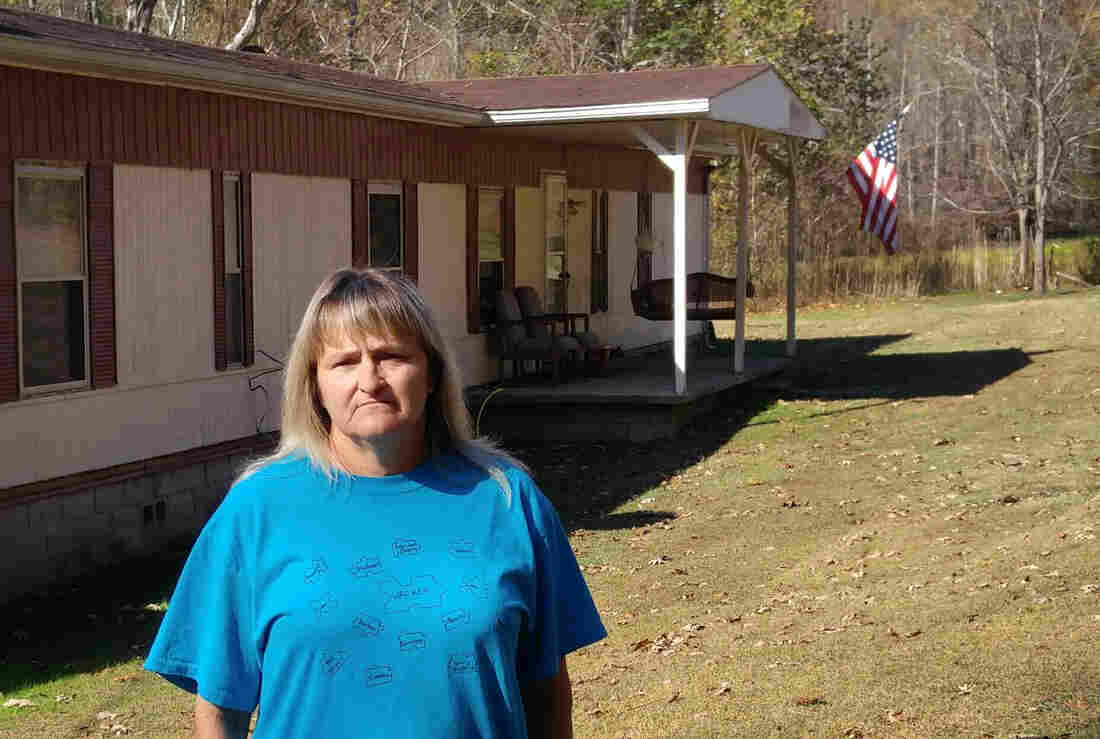 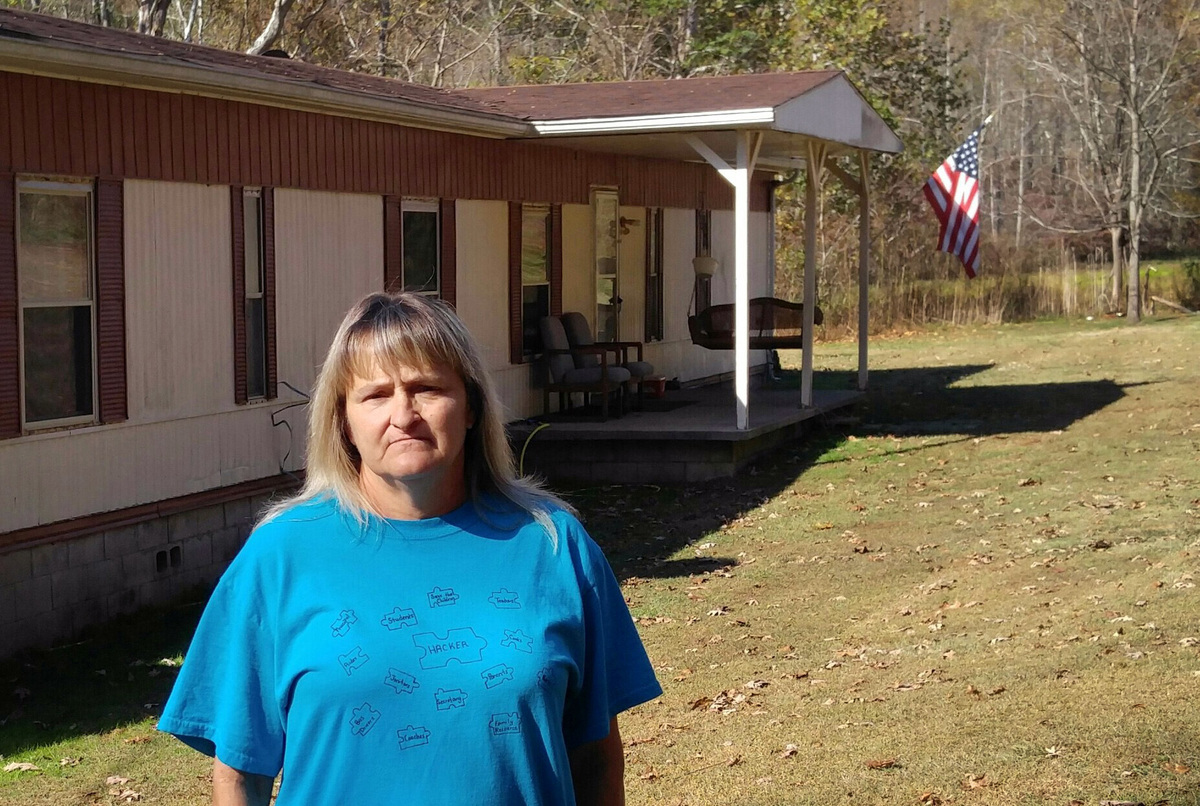 Freida Lockaby says she has benefited from access to health care coverage through Medicaid.

For Freida Lockaby, an unemployed 56-year-old woman who lives with her dog in an aging mobile home in Manchester, Ky., one of America's poorest places, the Affordable Care Act was life altering.

The law allowed Kentucky to expand Medicaid in 2014 and made Lockaby – along with 440,000 other low-income state residents – newly eligible for free health care under the state-federal insurance program. Enrollment gave Lockaby her first insurance in 11 years.

"It's been a godsend to me," said the former Ohio school custodian who moved to Kentucky a decade ago.

Lockaby finally got treated for a thyroid disorder that had left her so exhausted she'd almost taken root in her living room chair. Cataract surgery let her see clearly again. A carpal tunnel operation on her left hand eased her pain and helped her sleep better. Daily medications brought her high blood pressure and elevated cholesterol level under control.

But Lockaby is worried her good fortune could soon end. Her future access to health care now hinges on a controversial proposal to revamp the program that her state's Republican governor has submitted to the Obama administration.

Next year will likely bring more uncertainty when a Trump administration and a GOP-controlled Congress promise to consider Obamacare's repeal, including a potential reduction in the associated Medicaid expansion in 31 states and the District of Columbia that has led to health coverage for an estimated 10 million people.

What Happens If Kentucky Dismantles Its Health Insurance Exchange?

Kentucky Gov. Matt Bevin, who was elected in 2015, has argued his state can't afford Medicaid in its current form. Obamacare permitted states to use federal funds to broaden Medicaid eligibility to all adults with incomes at or below 138 percent of the federal poverty level, now $11,880 for individuals. Kentucky's enrollment has doubled since late 2013 and today almost a third of its residents are in the program. The Medicaid expansion under Obamacare in Kentucky has led to one of the sharpest drops in any state's uninsured rate, to 7.5 percent in 2015 from 20 percent two years earlier.

Kentucky's achievement owed much to the success of its state-run exchange, Kynect, in promoting new coverage options under the health law. Kynect was launched under Bevin's Democratic predecessor, Steve Beshear, and dismantled by Bevin this year.

Bevin has threatened to roll back the expansion if the Obama administration doesn't allow him to make major changes, such as requiring Kentucky's beneficiaries to pay monthly premiums of $1 to $37.50 and require nondisabled recipients to work or do community service for free dental and vision care.

Budget pressures are set to rise next year in the 31 states and the District of Columbia where Medicaid was expanded as the federal government reduces its share of those costs. States will pick up 5 percent next year and that will rise gradually to 10 percent by 2020. Under the health law, the federal government paid the full cost of the Medicaid expansion population for 2014-2016.

In a state as cash-strapped as Kentucky, the increased expenses ahead for Medicaid will be significant in Bevin's view — $1.2 billion from 2017 to 2021, according to the waiver request he's made to the Obama administration to change how Medicaid works in his state.

Trump's unexpected victory may help Bevin's chances of winning approval. Before the election, many analysts expected federal officials to reject the governor's plan by the end of the year on the grounds that it would roll back gains in expected coverage.

A Trump administration could decide the matter differently, said Emily Beauregard, executive director of Kentucky Voice for Health, an advocacy group that opposes most waiver changes because they could reduce access to care.

"I think it's much more likely that a waiver could be approved under the Trump administration," she said. "On the other hand, I wonder if the waiver will be a moot point under a Trump administration, assuming that major pieces of the [Affordable Care Act] are repealed."

Lockaby is watching with alarm: "I am worried to death about it."

Life already is hard in her part of Kentucky's coal country, where once-dependable mining jobs are mostly gone.

In Clay County where Lockaby lives, 38 percent of the population live in poverty. A fifth of the residents are disabled. Life expectancy is eight years below the nation's average.

Clay's location places it inside an area familiar to public health specialists as the South's diabetes and stroke belt. It's also in the so-called "Coronary Valley" encompassing the 10-state Ohio/Mississippi valley region.

About 60 percent of Clay County's 21,000 residents are covered by Medicaid, up from about a third before the expansion. The counties uninsured rate for nonelderly adults has fallen from 29 percent to 10 percent.

Still, the increase in insurance coverage hasn't made Clay's people healthier yet. Local health officials here say achieving that will take a decade or more. Instead, they cite progress in smaller steps: more cancer screenings, more visits to mental health professionals and more prescriptions getting filled. Harder lifestyle changes that are still ahead — such as eating better, quitting smoking and regular exercise — will take more than a couple years to happen, said Aaron Yelowitz, associate professor of economics at the University of Kentucky. 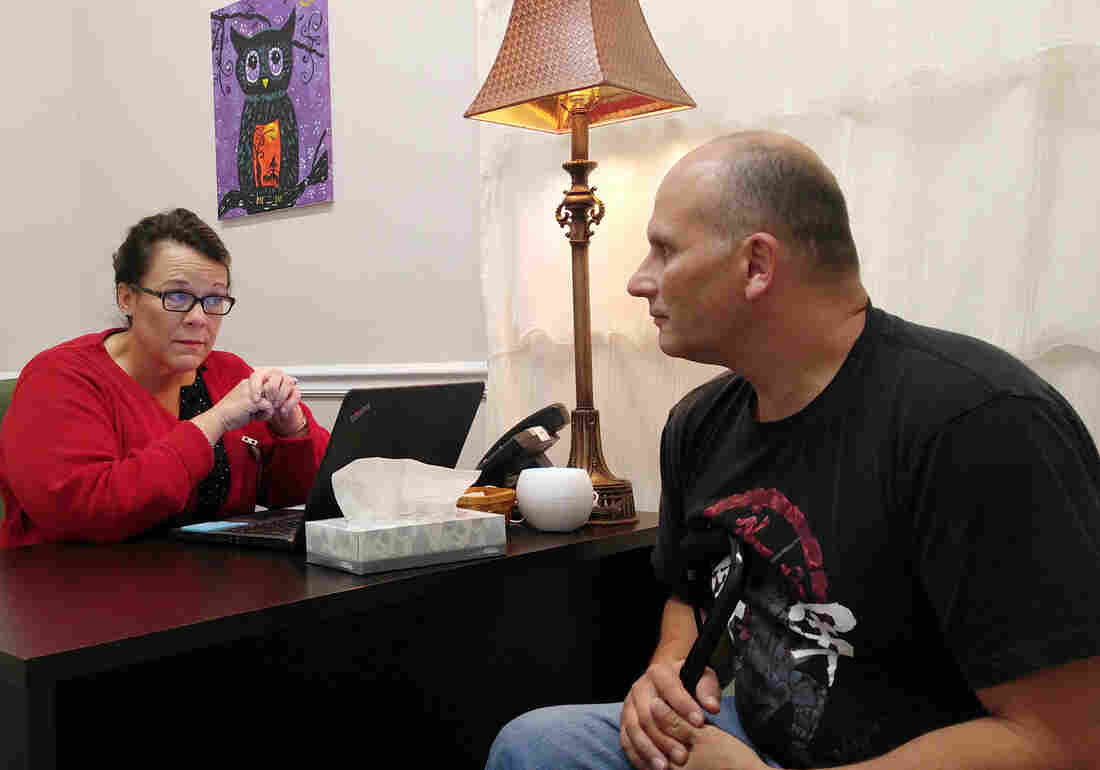 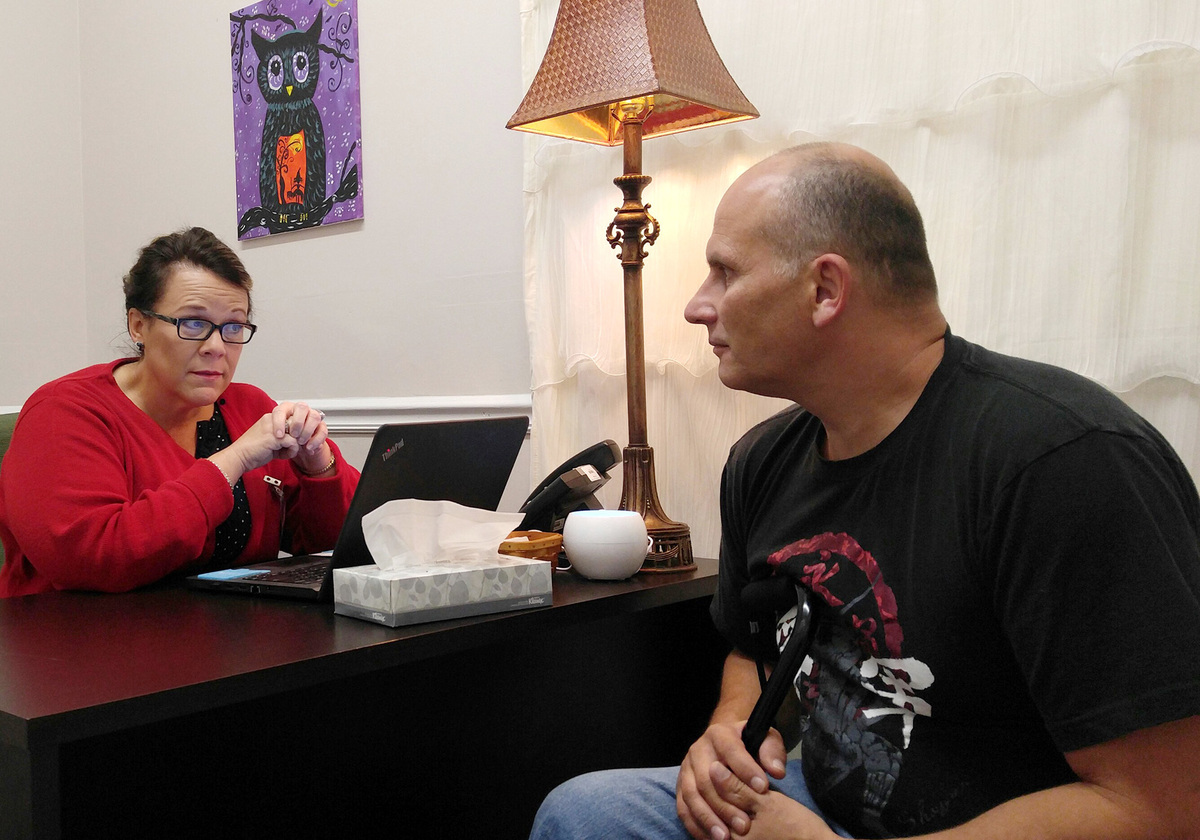 At the Grace Community Health Center in Manchester, Ky., psychologist Joan Nantz meets with patient Ramiro Salazar, who gained Medicaid under the expansion.

One hopeful spot is the Grace Community Health Center in downtown Manchester, where patient visits are up more than 20 percent since 2014. Those without insurance pay on a sliding scale, which can mean a visit costs $50 or more.

That was too much for Ramiro Salazar, 47, who lives with his wife and two children on a $733 monthly income. With Medicaid, he sees a doctor for his foot and ankle pain, meets regularly with a psychologist for anxiety and gets medications — all free to him. Medicaid even covers his transportation costs to doctors, vital because a specialist can be 40 miles away.

Salazar is worried about Bevin's plans, especially the additional costs. "I probably couldn't afford it as I'm unemployed," he said. "It would hurt me pretty bad."

Any development that could take away health coverage from people with mental health issues worries Joan Nantz, a psychologist who works part time at Grace and whose appointment calendar is booked three weeks out because of patient demand. More than 90 percent of her clients are on Medicaid.

"If something happens to this program, I can't begin to think what impact it would have on society," she said. Without counseling, people with mental health issues will resort to illegal drugs and be more likely to commit crimes and domestic violence, Nantz said.

"We had a painful primary care shortage here five years ago and now it's worse," said Dr. Jeffrey Newswanger, an emergency room physician and chief medical officer at the hospital. "Just because they have a Medicaid card doesn't mean they have doctors."

The emergency room is busier than ever seeing patients for primary care needs, he said.

Newswanger sees both sides to the debate over Medicaid. The hospital gained because more patients are now covered by insurance, and the ER's uninsured rate dropped to 2 percent from 10 percent in 2013.

"Eliminating the expansion altogether would be painful for the hospital and a disaster for the community," he said.

But, Newswanger also appreciates some of Bevin's proposals.

"No one values something that they get for free," he said, and incentives are needed to make people seek care in doctors' offices instead of expensive ERs.

Last year, Green helped Manchester build a three-mile trail along a park and install a swinging bridge across a small creek. Both additions were intended to promote physical fitness in a place where more than a third smoke — both far above national averages.

Progress is slow. The path is used regularly. But drug addicts congregate daily by the bridge and it rarely gets traffic.

"There is a lot to overcome here," Green said.

This story was produced through a collaboration between NPR and Kaiser Health News, an editorially independent program of the Henry J. Kaiser Family Foundation, a nonpartisan health care policy research organization. You can follow Phil Galewitz on Twitter: @philgalewitz.