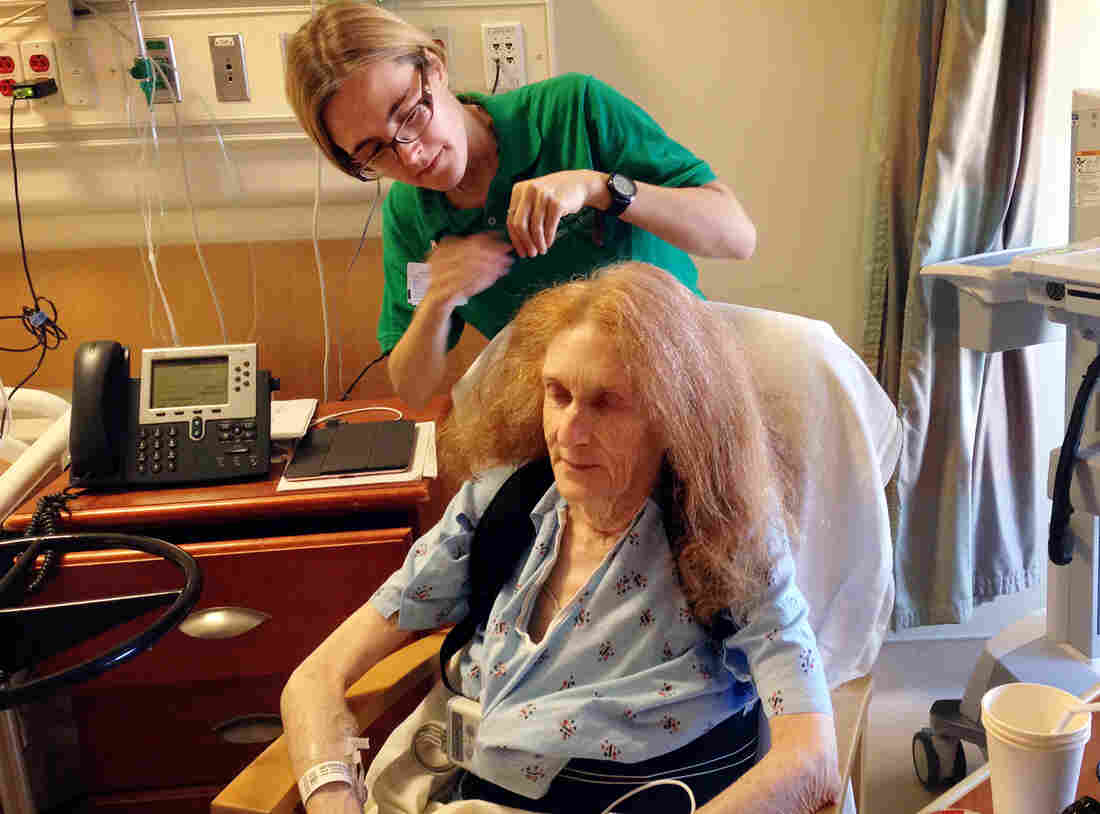 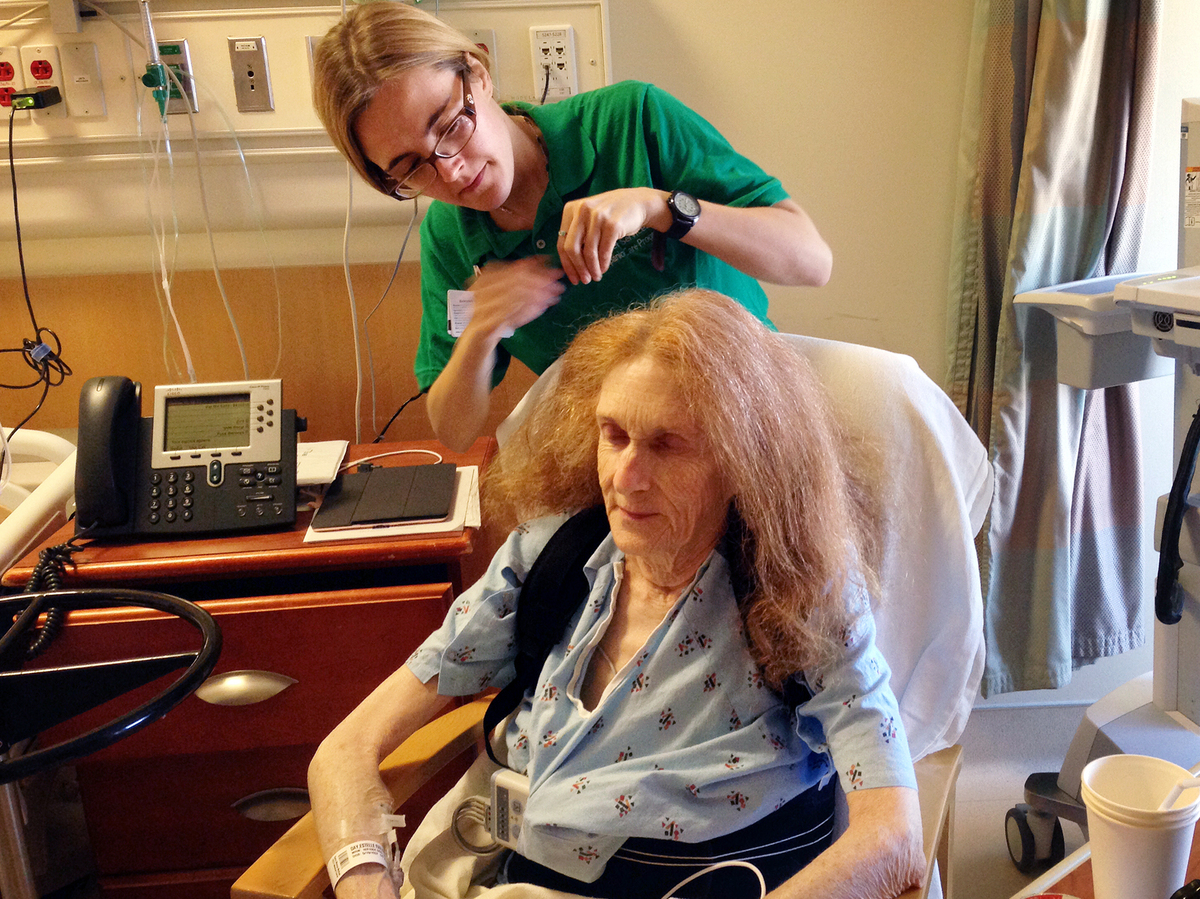 Loneliness can be a problem for older people, especially when they're in the hospital. Their children may have moved away. Spouses and friends may themselves be too frail to visit. So a California hospital is providing volunteer companions in the geriatric unit.

One of the volunteers at the UCLA Medical Center in Santa Monica is 24-year-old Julia Torrano. She hopes to go to medical school. Meanwhile, her twice-weekly volunteer shifts give her a lot of practice working with patients.

One of them is Estelle Day. She's 79 years old, a slender woman with a wild mane of hair that is still mostly red. Torrano peppers her with questions.

"Where were you originally from?" asks Torrano. Day replies that she grew up on Long Island in New York. Torrano also wants to know how Day met her husband, where she learned to play the harp, where her travels have taken her.

Day is happy to answer everything. She says she likes people and describes herself as "windbaggy." That's especially true if she's talking about playing music. She is a lifelong musician and retired music teacher. She plays harp and guitar, but her favorite instrument is the pipe organ. "To be able to rock a building under your hands and your feet is exciting," she says.

This was Day's fifth day as a patient in the geriatric unit. She says multiple chronic conditions brought her here, but she didn't want to name them. Visible were a bulky back brace she wears for her osteoporosis, an IV drip and a heart monitor.

When that heart monitor suddenly began beeping, Torrano was out of the room like a shot. She returned seconds later with a nurse who solved the problem with the push of a button.

Torrano and the other volunteer companions aren't just candy stripers, bringing snacks and magazines. She knew what to do when the heart monitor started beeping because, like all of the volunteers in this program, she's been trained. As Dr. David Reuben, chief of geriatrics at the Geffen School of Medicine at UCLA explains: "Just because you're willing to do something doesn't mean you know how to do it."

Volunteers learn about medical confidentiality, what to do in an emergency, and how to interact with patients, including patients with dementia. Reuben says they go through a "vigorous training process and vetting process before we allow them to be with patients." There are nearly three dozen volunteers so far. The program started just a few months ago, and the hospital plans to expand it.

Loneliness is a legitimate medical issue. There are a number of studies linking loneliness and social isolation in old people to poorer health and earlier death, including one published earlier this month in JAMA Psychiatry associating loneliness, social isolation and brain changes typical in Alzheimer's. Reuben cautions that those studies weren't done in a hospital setting. Nevertheless, he says, "you might suspect that being more engaged, more energized ... might promote a speedier recovery."

So now the hospital is designing studies to find out if the volunteer companionship improves medical outcomes, or at least improves the patient's experience in the hospital.

Torrano says she'll sometimes spend her entire four-hour shift with a single patient. Like Estelle Day, many are happy to share their life stories. She remembers one man in particular who had been a political prisoner in Iran. He'd run an underground newspaper. "He was in jail so much," she recalls, yet he told her he also misses Iran. "Even though it was very traumatic, he still wishes he was there," Torrano says.

Estelle Day says she's not especially lonely, but she has been alone much of the time since she was admitted to the geriatric unit. So it helps to have a companion who will not only listen to her life story, but can also troubleshoot the little problems that can make life in a hospital such a challenge. "Somebody who is sensitive and tuned-in and is very helpful," explains Day, the way Torrano was when Day's heart monitor started acting up.

And companionship can take many forms. On the day of Torrano's visit, one of Day's most pressing issues was fixing her hair. It had been shoved up in a rubber band since she was admitted.

So with Day's encouragement, Torrano picks up a comb and gently begins detangling. Whatever it takes to make the patient look good and feel better.