Accessibility links
Indiana Expanded Access To Medicaid Under Pence, But It Might Not Last : Shots - Health News Indiana Gov. Mike Pence expanded access to Medicaid with a conservative twist. How it was done may offer hints into how Republicans proceed with changes to Obamacare. 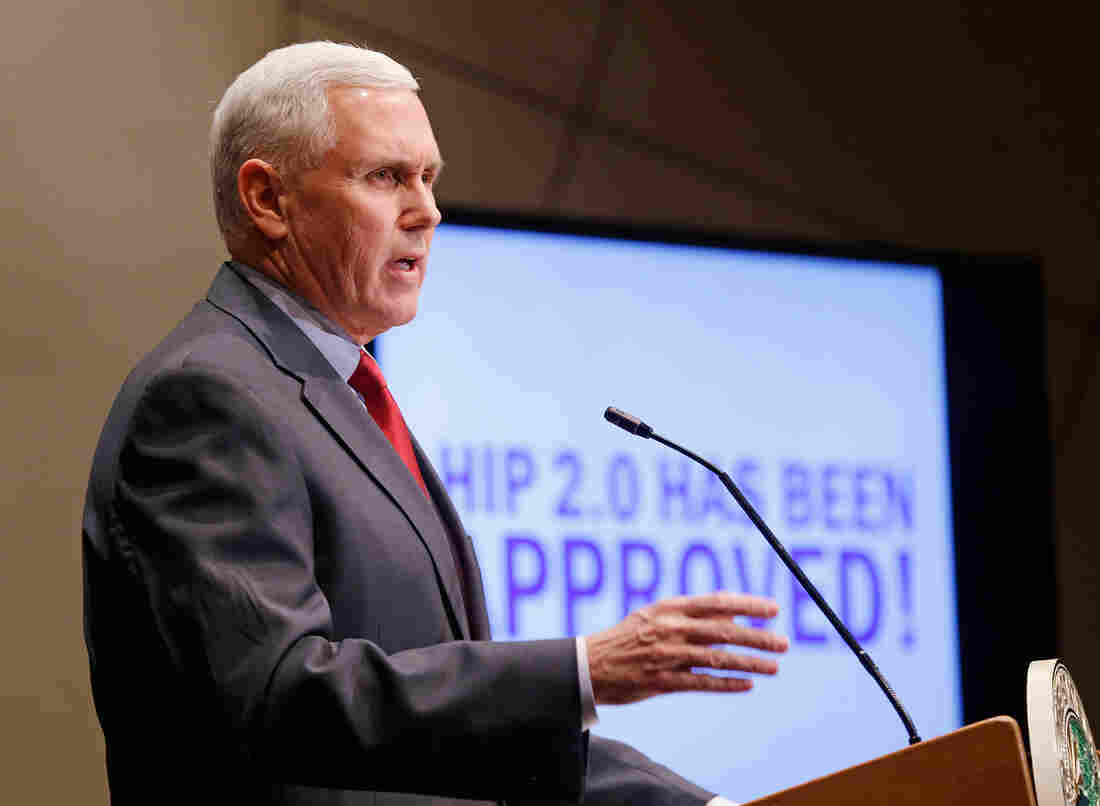 In 2015, Indiana Gov. Mike Pence announced that the Centers for Medicaid and Medicare Services had approved the state's waiver to try a different approach for Medicaid. Michael Conroy/AP hide caption 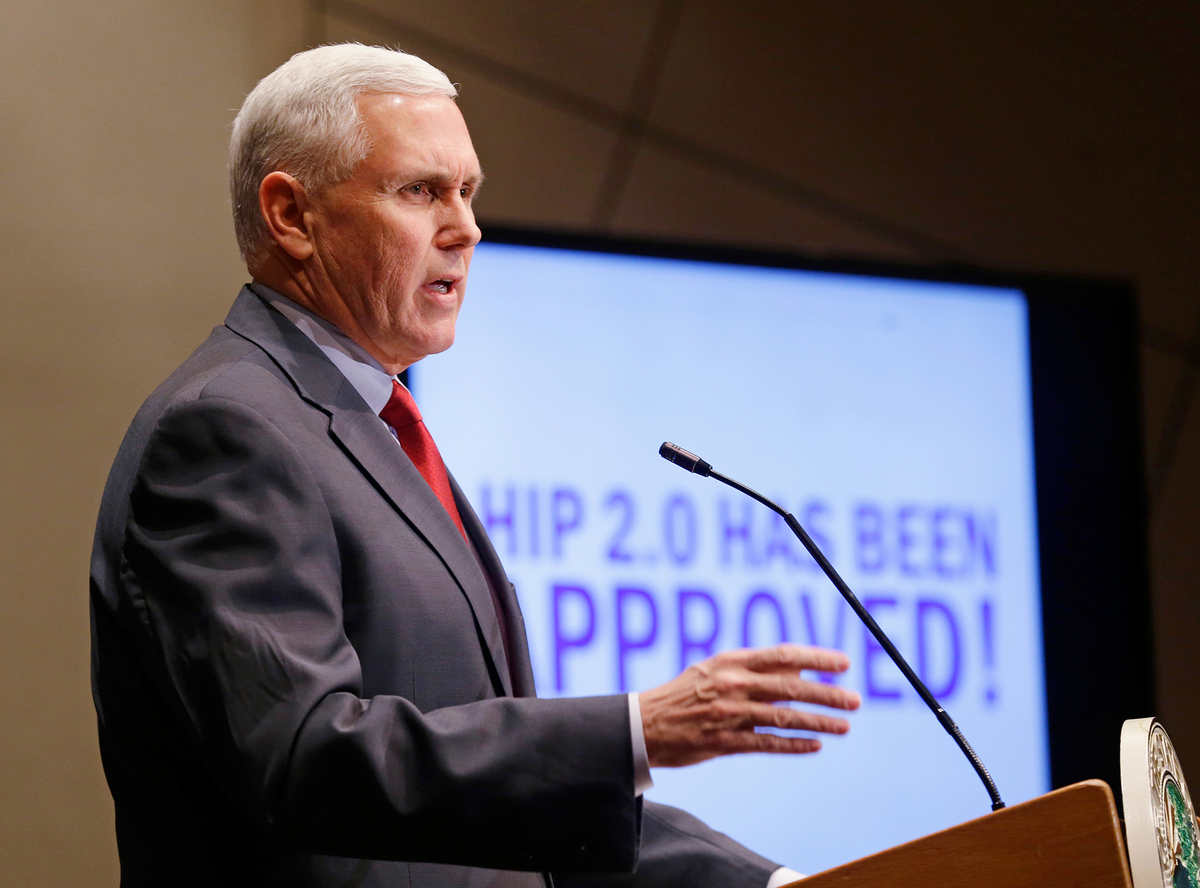 In 2015, Indiana Gov. Mike Pence announced that the Centers for Medicaid and Medicare Services had approved the state's waiver to try a different approach for Medicaid.

Chris Cunningham was so thrilled with Indiana Gov. Mike Pence's Medicaid expansion under the Affordable Care Act that she readily accepted his invitation to an event celebrating its first anniversary in January.

After eight years without health insurance, Medicaid coverage paid for treatment of her thyroid problem and lung disease and prescription drugs to help both. "It was a game changer for me," the Indianapolis woman said.

Election Day's results are on her mind now.

Indiana Gov. Mike Pence was one of 10 Republican governors to expand Medicaid under Obamacare, but as President-elect Donald Trump's running mate, Pence is now calling for the health law's repeal and replacement.

If that happens, millions of low-income people around the country added to the state-federal insurance program since 2014 under the health law are at risk of losing their health insurance. Thirty-one states and the District of Columbia have expanded Medicaid, extending coverage to at least 10 million Americans.

"I don't see how a compassionate human being can rip health care away from millions of people," Cunningham said.

What Pence did with Indiana's Medicaid program may place him in the middle ground of political battles to come over Obamacare's future. He called for the law's repeal even before joining Trump, but also pushed Medicaid's expansion in a conservative direction by advocating for stricter eligibility requirements on low-income people receiving government-paid health care.

Neither Trump nor any other top Republican has spelled out what a replacement would look like. Trump has said he supports Medicaid block grants to states — a way of stabilizing federal funding that could ultimately raise states' costs and force them to cut benefits or eligibility.

The health law allowed states to open Medicaid to all adults with incomes at or below 138 percent of the federal poverty level, with all the extra costs paid by the government for the first three years, 2014 through 2016.

Pence took the federal money but won the Obama administration's approval to add features that set Indiana apart from other expansion states. For example, recipients are required to pay money — $1 a month for many — into special accounts that Pence contends will make them more conscious of the costs associated with health care.

Healthy Indiana Plan 2.0 pushed Medicaid's traditional boundaries, which is why it has captured attention in conservative states. The plan demands something from all enrollees, even those below the poverty level. Individuals who fail to keep up their contributions lose dental and vision coverage and face copayments. Those above the poverty level can temporarily lose all coverage if they fall behind on contributions.

Proponents, including Pence, have said the strategy makes Medicaid recipients share financial responsibility for their care and that it will save Indiana money by reducing unnecessary services and inappropriate emergency room use.

Pence has said Indiana's program has lowered ER use, led to recruitment of more physicians by paying them more and succeeded in getting most recipients to contribute monthly payments.

"This is an innovative, fiscally responsible program," Pence said at the expansion's first anniversary event that Cunningham attended in Indianapolis. "We are improving outcomes, improving lives and improving the fortunes of Hoosiers."

Cunningham said last week she remembers that day well and the personal connection Pence made with her and other new enrollees.

"It does give me hope that Gov. Pence started Medicaid expansion here and talked highly of it," she said. "When I met him that day, it gave me a sense that even though I didn't agree with 75 percent of what he stood for, I found him to be a really good man [who] really wanted to improve the health situation for people of Indiana."

What Happens If Kentucky Dismantles Its Health Insurance Exchange?

Indiana hospitals are also hoping Pence will be an advocate for preserving the expansion.

The expanded Medicaid program pumped millions of dollars into the state's hospital industry by providing them more paying patients and increasing their Medicaid reimbursements.

Brian Tabor, executive vice president of the Indiana Hospital Association, said the election results have him worried about the future of Medicaid and Obamacare. But knowing Pence will have Trump's ear could make a difference.

Pence "understands that with some flexibility, states can be successful at expanding coverage and that bodes well for states like Indiana," he said. "He is passionate about the health and security that Medicaid provides to Hoosiers. I am confident that he will have a significant policy role in the White House and will use that in a way to preserve what we have in Indiana."

Tabor said that while block grants or a per capita limit for Medicaid would give states more autonomy in running the program, he worries it would mean cuts in federal funding that would hurt recipients and providers.

Medicaid's expansion in Indiana has provided vital funding to hospitals, particularly those in rural areas that have struggled to stay open. "It's been a lifeline to many rural providers," he said.

Susan Jo Thomas, executive director of Covering Kids & Families of Indiana, an advocacy group, seems less hopeful for the future of Medicaid expansion and the program overall even with Pence as vice president.

"It's scary to us," she said of the prospect of losing Obamacare and Medicaid becoming a block grant program. While Republicans have proposed the block grant idea since the 1980s, she noted it could find stronger support because Congress has turned more conservative and most states have conservative governors.

For Cunningham, Medicaid expansion in 2015 came at the right time. She had been managing several group homes for the disabled in 2008 when she ended her career to care for her own disabled husband.

"I was in a desperate situation and I've been very grateful for the help," she said.

For her at least, worries about not having insurance will fade next May.

That's when she will turn 65 and enroll in Medicare.

This story was produced through a collaboration between NPR and Kaiser Health News, an editorially independent program of the Henry J. Kaiser Family Foundation, a nonpartisan health care policy research organization. You can follow Phil Galewitz on Twitter: @philgalewitz.