Accessibility links
With Obamacare's Future In Doubt, Beneficiaries Fret : Shots - Health News Many people who are grateful for Obamacare are also frustrated by it. Three voters weigh in about their hopes and fears for the Affordable Care Act under a Trump administration. 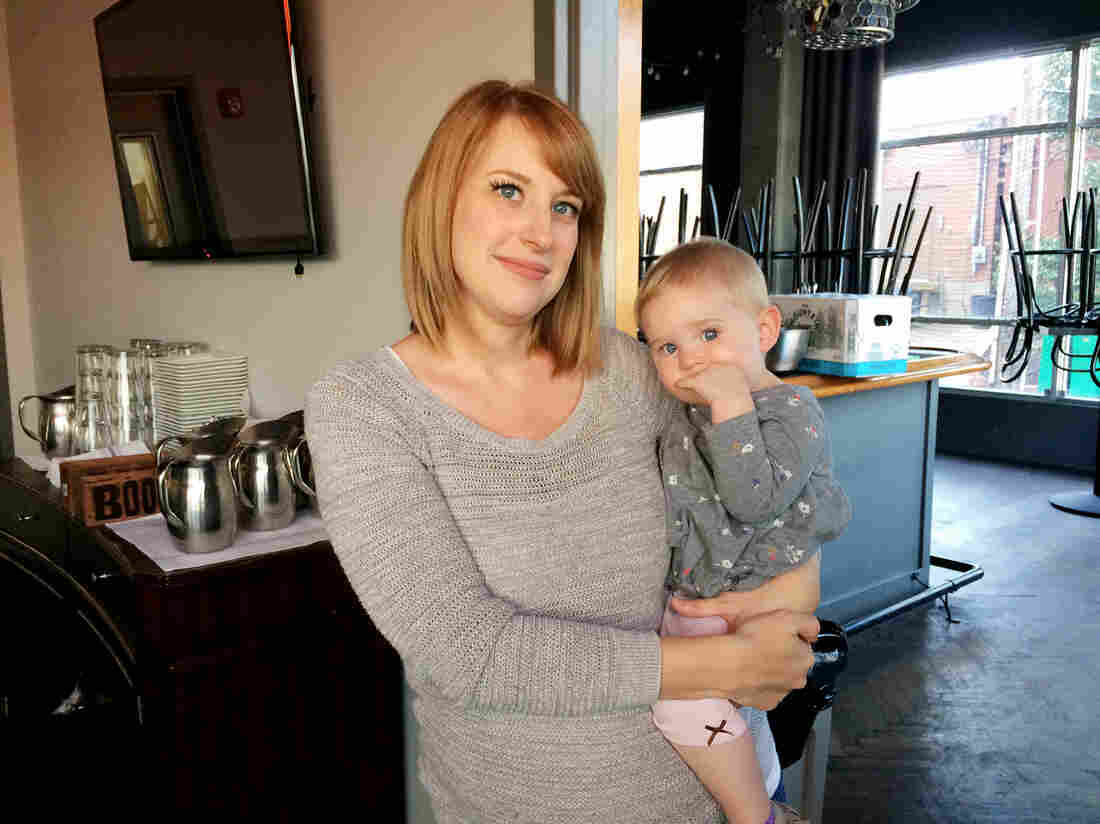 Keely Edgington and her daughter, Lula, pose inside their family-owned restaurant, Julep, in Kansas City, Mo. Lula was diagnosed with a neuroblastoma when she was 9 months old. She's now 16 months old. Alex Smith / KCUR hide caption 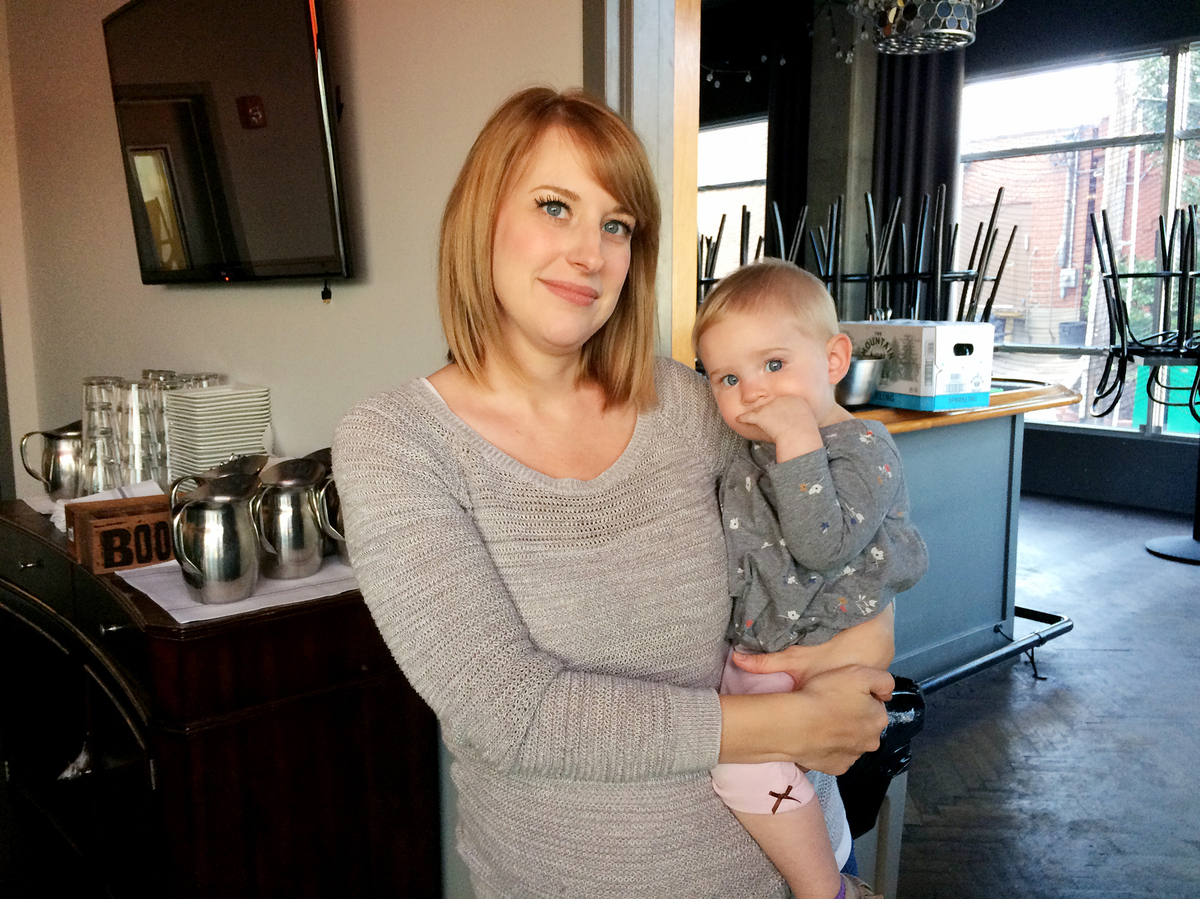 Keely Edgington and her daughter, Lula, pose inside their family-owned restaurant, Julep, in Kansas City, Mo. Lula was diagnosed with a neuroblastoma when she was 9 months old. She's now 16 months old.

This month's election results could have big implications for those who now have insurance because of the Affordable Care Act — either through the exchanges or Medicaid expansion. President-elect Trump and Republicans in Congress have made it clear they want to scrap the law, but it's unclear what may replace it. That gap between repeal and replacement has left many unsure of what will happen with their medical care. We have these reports from around the country from people who could be affected by changes.

If you stop by Julep, a Kansas City, Mo., bar and restaurant, you might catch a glimpse of Lula — the blond, blue-eyed toddler daughter of the owners, Keely Edgington and Beau Williams. They let her inspect the customers a bit before the place gets too busy.

"She likes to go out there and essentially just stare everybody down and smile at them," Edgington says.

She's so smiley you'd never guess how much she's been through in her short life. "She happens to have 4S non-amplified neuroblastoma," Edgington says. It's a cancer in her adrenal gland that doctors discovered when Lula was 9 months old. She needed emergency surgery because of the size and location of the tumor.

The cost was enormous. Edgington says she stopped looking at bills after they topped $350,000, and that was before the surgery. The vast majority of the cost was paid for through the insurance the family gets through HealthCare.gov, the federal health insurance marketplace created under the Affordable Care Act. They say, as small business owners, the exchange and subsidies they received because of the law were their only way they could get covered.

Lula has responded well to the treatment. She's been in remission for a few months, but the family still faces high medical costs. At a minimum, Lula will need intensive, expensive screenings and scans for a few years, then she'll have to be monitored for health conditions that might come up as a result of chemotherapy.

Since the election, the family says they've been on eggshells waiting to see what will happen with their insurance. They fear possibly losing subsidies. And, before the Affordable Care Act insurance companies could deny coverage to people with preexisting medical conditions like Lula's, and the companies could set lifetime limits on the amount they'd pay for someone's care. Insurers could also take into account an individual's health history, so that someone with a chronic disease might pay many times more than a healthier person.

The family has been thinking about how they might cope with huge medical or insurance costs that might come if Obamacare is repealed. They've pondered a second mortgage, selling their business or even more desperate measures.

"Do we have to move to Canada and hope we get coverage there? That's really extreme, but what wouldn't you do for your child's life?" says Edgington

Trump has said he'd make sure insurance companies couldn't deny coverage to a person with a preexisting condition, but he has provided no formal plan, and much of what happens next is in Congress's hands. Insurance and legal analysts are also unclear about what will happen, although most think the biggest changes probably wouldn't go into effect until at least 2018. — Alex Smith, KCUR, Kansas City, Mo.

Obamacare Choices Are Dwindling For Some

Michael Cluck and his wife Nancy live in Edwardsville, Ill., just outside St. Louis. Cluck, 62, and his wife, Nancy, 58, bought insurance through HealthCare.gov in 2015, and it, "actually saved us $300 a month, and we were really happy with it," he says.

But two providers, including his own insurer, Coventry, dropped out of the health insurance exchange in his county and two adjacent ones for 2017. There's now just one choice there: Blue Cross Blue Shield of Illinois. 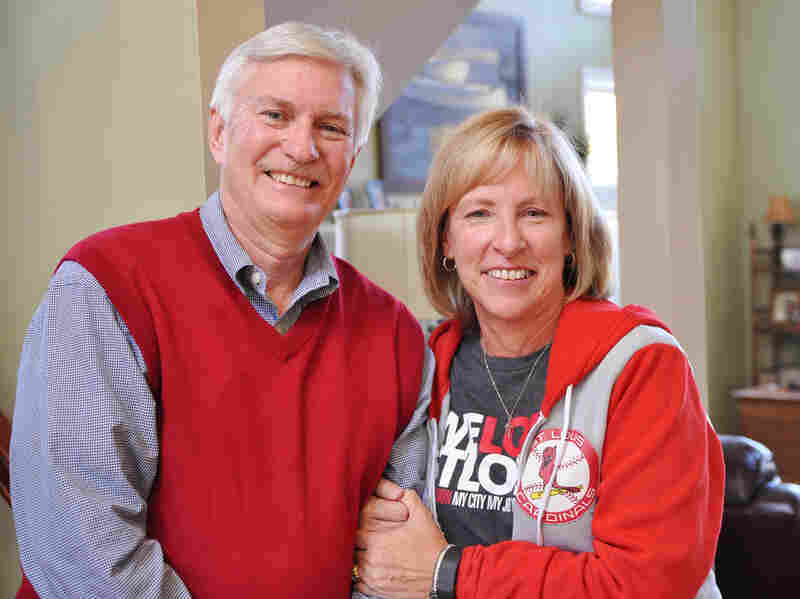 Mike Cluck and his wife, Nancy, of Edwardsville, Ill., were happy with Obamacare until their insurer dropped out. Durrie Bouscaren / St. Louis Public Radio hide caption 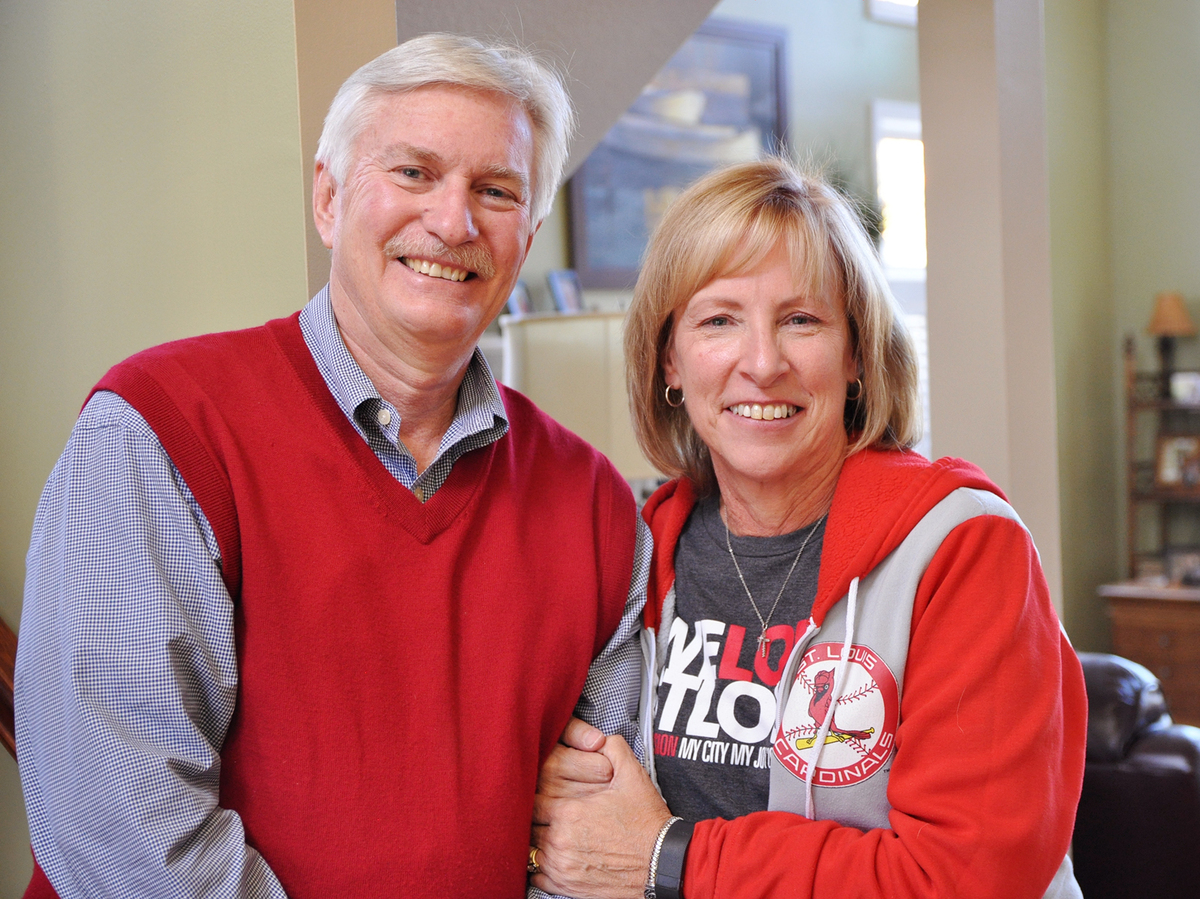 Mike Cluck and his wife, Nancy, of Edwardsville, Ill., were happy with Obamacare until their insurer dropped out.

Cluck had prostate cancer. He is now free of cancer, but he still needs regular checkups and he fears the cancer may return. It takes him about 30 minutes to drive to oncology appointments now, but the in-network providers Blue Cross Blue Shield of Illinois shows in its directory are farther away.

"That's where the problem came in. Because all of my cancer doctors, and Siteman Cancer Center, are in St. Louis, Mo.," Cluck says.

To Cluck, it's a frustrating display of flaws in the Affordable Care Act.

"This was not supposed to happen," he says. "When they put the Affordable Care Act in place, we were promised we could keep our doctors. We were promised it would cost $2,500 less than what we were currently paying. And nothing's come true."

On Nov. 8, when faced with a choice between Democratic presidential nominee Hillary Clinton and Donald Trump, he voted for the Republican.

"For a lot of reasons, not just Obamacare," he says. But while he hopes that there's a good replacement plan ready for any changes to Obamacare, he's is frustrated by the insurance companies' narrow networks.

"I don't understand why, when the health care companies are recording record profits that they're not staying in the Affordable Care Act. That's the one thing that just boggles my mind."

So, he hopes Trump follows through on his promise to repeal and replace.

"There's a lot of things they need to fix, because there's a lot of people who are reliant upon medical care and health care. I think this should really be fixing, dismantling--however you want to call it--the Affordable Care Act, I think that needs to really be a priority for the new administration." — Durrie Bouscaren, St. Louis Public Radio. 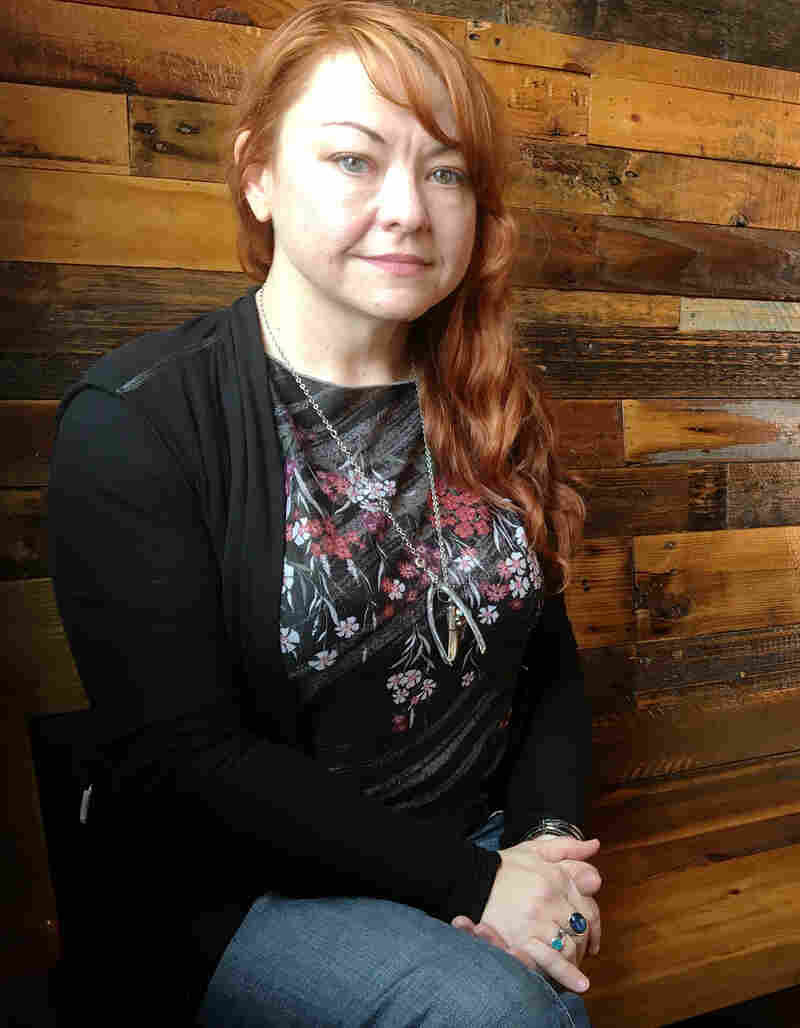 Leigh Kvetko relies on health insurance she bought through the federal marketplace to pay for the expensive medications that keep her alive after two organ transplantations. Lauren Silverman / KERA News hide caption 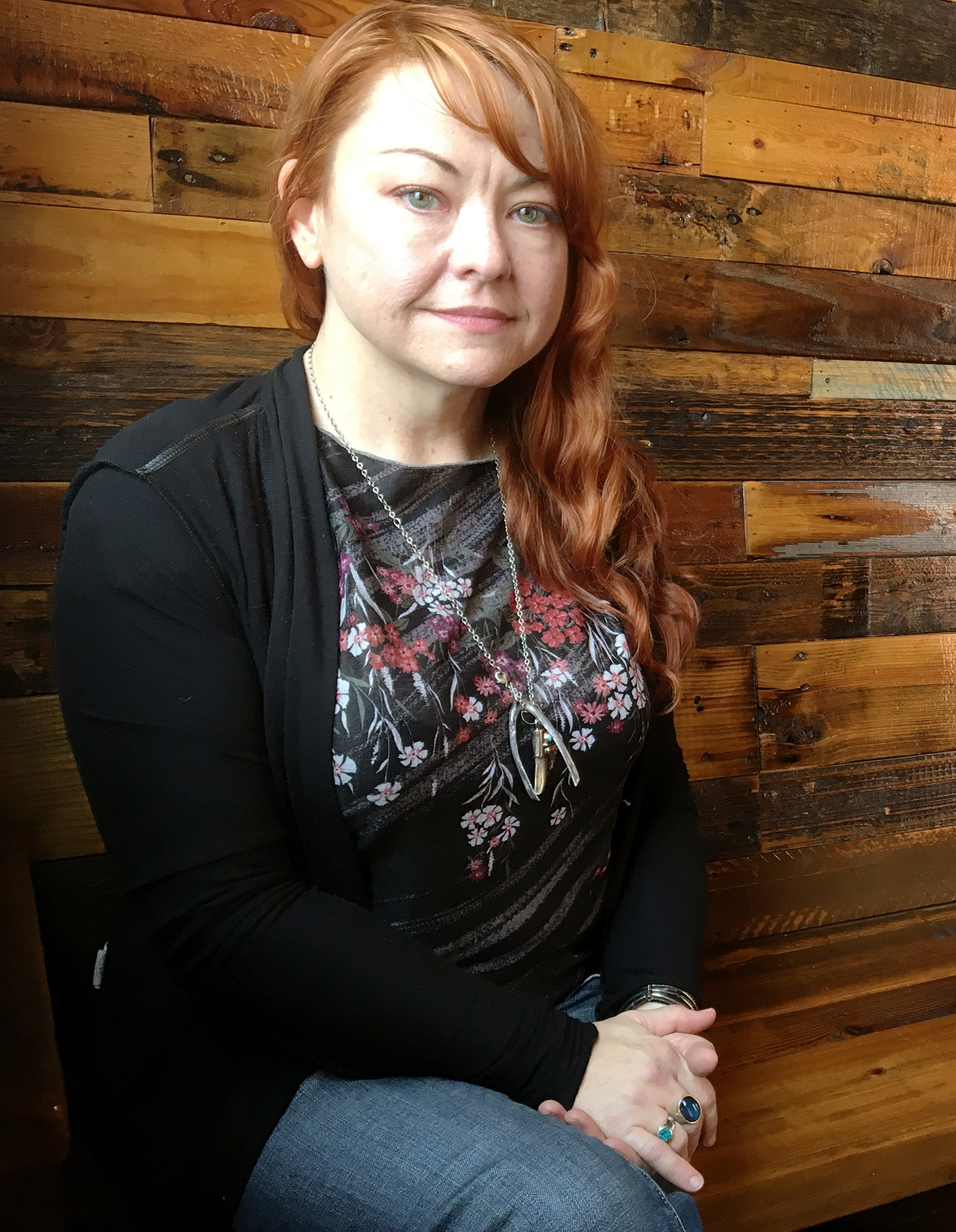 Leigh Kvetko relies on health insurance she bought through the federal marketplace to pay for the expensive medications that keep her alive after two organ transplantations.

Leigh Kvetko, 46, of Dallas, has to take 10 medications twice a day because she's had two organ transplants to replace her pancreas and kidney in 2003. Several of the pills she takes cost nearly $1,000 each per month. For years, Kvetko stuck with a job she hated in large part because it offered health insurance. When the Affordable Care Act passed, insurers could no longer discriminate against people like Kvetko, who have diagnosed health problems, and she and her husband finally felt free.

"It gave me hope and [my husband and I] decided to sell our house, to downsize, and to start our own businesses and start a new chapter of our lives."

In this new chapter, Kvetko is retail manager at a busy Dallas coffee shop. She struts through the store in cowboy boots, her long red hair framing green-speckled eyes. She looks happy — and healthy. But her pancreas is failing, and she's terrified about President-elect Trump's promise to dismantle the Affordable Care Act. She fears it will put health care out of reach for her, and another 1.2 million Texans who rely on subsidized plans. — Lauren Silverman, KERA, Dallas.

These reports come to us as part of a partnership with NPR, local member stations and Kaiser Health News.