Accessibility links
21st Century Cures Act Appears To Be On Verge Of Passage : Shots - Health News The House could vote Wednesday on a vast bill that stretches nearly a thousand pages and holds changes large and small for the National Institutes of Health and the Food and Drug Administration. 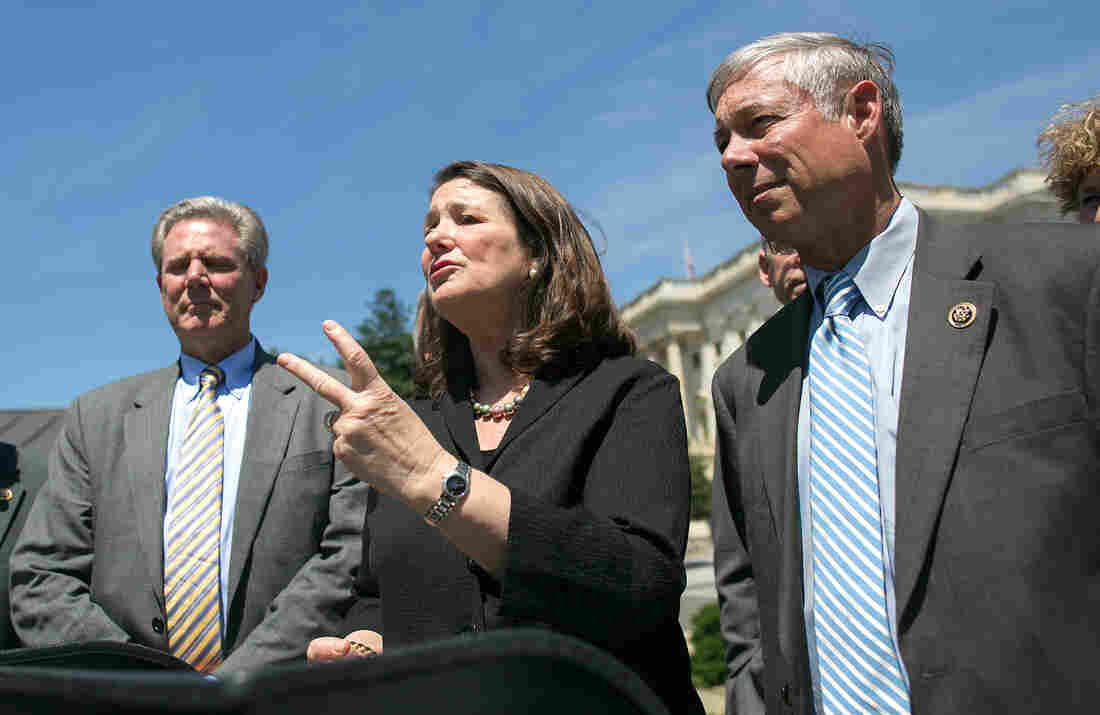 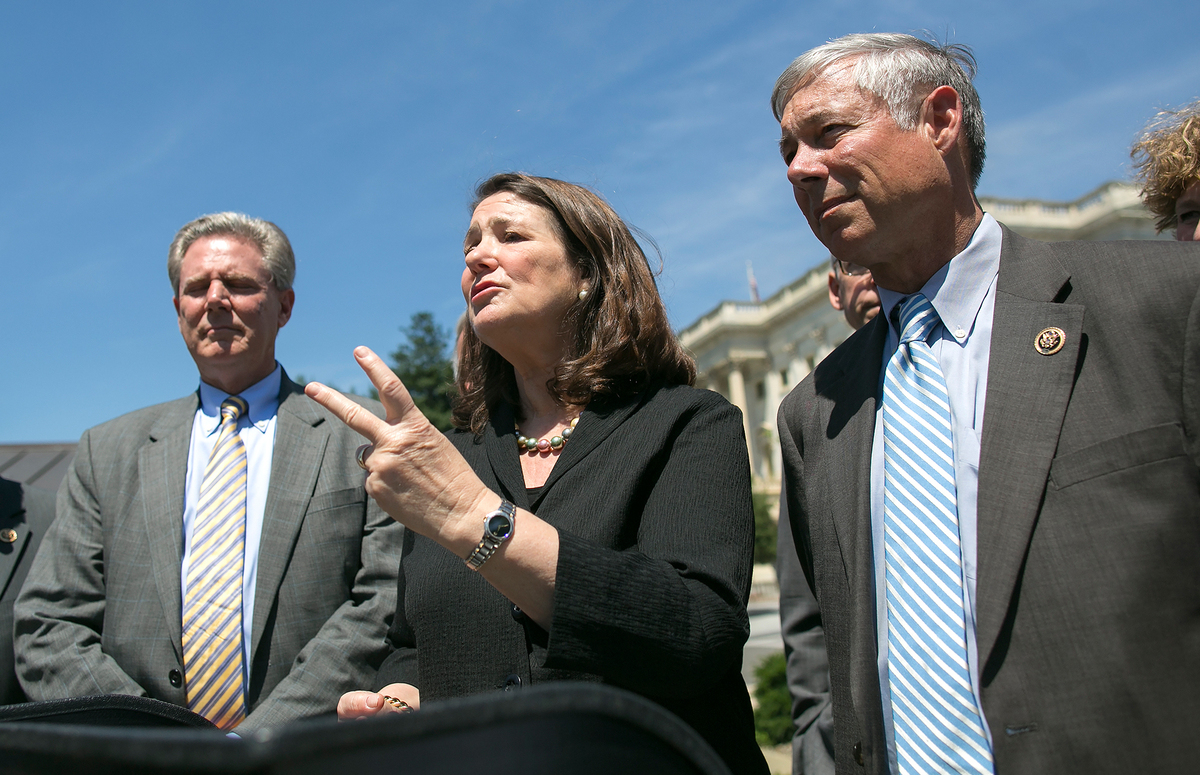 Rep. Diana DeGette, D-Colo., and Rep. Fred Upton (right), R-Mich., who have spearheaded the 21st Century Cures Act, speak after a 2015 House of Representatives vote in its favor.

Updated Dec. 1, 9:05 a.m.: The House of Representatives voted overwhelmingly on Wednesday to approve the 21st Century Cures Act, a sprawling bill to fund medical research and revamp how drugs and medical devices are approved by the Food and Drug Administration.

The bill passed on a vote of 392-26. The Senate could vote on the bill early next week. It has garnered support from a wide variety of advocacy groups, industry lobbyists and the Obama administration. One notable dissident is Sen. Elizabeth Warren, D-Mass., who said her colleagues have "let Big Pharma hijack the Cures bill."

Legislation to bolster medical research and revamp the way new drugs and medical devices are approved is on the fast track through a Congress that has had little success to celebrate this year.

The House could vote Wednesday on a vast bill that stretches nearly a thousand pages and holds changes large and small for the National Institutes of Health and the Food and Drug Administration.

Analysts are still picking through the law, which has bipartisan support. They are raising both hope and concern about its sweeping provisions.

Advocates for biomedical research are happy to see billions of dollars in new funding for the NIH and associated projects. (The money will come, in part, from portions of the Affordable Care Act that are on the chopping block following the November election.)

The National Institutes of Health budget has slipped about 20 percent over the past decade in terms of buying power. The 21st Century Cures Act does little to offset that decline, but it does include billions of research dollars for some new high-profile projects, such as Vice President Biden's push to accomplish 10 years of cancer research in half that time.

"The Cancer Moonshot is emblematic of the way our nation should feel about medical progress," says Ellie Dehoney, vice president of policy and advocacy at Research!America. "It should be a top priority and we would be devoting more resources, more time and more of our intellectual capital to that goal."

The bill also promises faster action on potential new drugs and devices. And this is where some of the concerns come in.

"It is a massive bill that has scattered throughout a grab bag of goodies for the medical device and pharmaceutical industries," says Dr. Michael Carome, director of Public Citizen Health Research Group.

More than 1,455 lobbyists had a hand in the bill, according to Kaiser Health News, which scoured records at the Center for Responsive Politics. So Carome says the legislation isn't all about helping sick people get better.

He's concerned that some parts of the bill would allow drugs to be approved on thinner evidence than they now require.

"There's no doubt that patients would like to get treatments faster to the market, but they need to be assured those treatments are safe and effective for each of those marketed uses," Carome says.

The new law would allow a drug approved for one purpose to be used for a related disease without going through the entire approval process, he said. Carome worries that measure could put patients at risk.

The Food and Drug Administration has been working faster on drug approvals, even without the new legislation. Drugs can be approved based on inferences that they work, but without proof of a long-term benefit. Researchers use a "surrogate endpoint," such as tumor's response to a drug, even though that response may not lead to a longer or healthier life.

The faster approach doesn't always work out as planned. Diana Zuckerman, who heads the National Center for Health Research, points to a study that found 18 of the 36 cancer drugs recently approved on the basis of surrogate endpoints turned out not to help people live longer.

"What's happening is we are flooding the market with medical products that don't work very well, or we don't know whether they work," Zuckerman says.

She has a new study (slated for publication in JAMA Internal Medicine, but not yet in print) showing that often these new cancer drugs don't even improve the quality of life for these cancer patients, despite the drugs' soaring price tags.

Zuckerman say she's concerned that the 21st Century Cures act will make it even easier for drug companies to use this express lane for approval.

But Dr. McClellan, who served in the George W. Bush administration and is now director of the Margolis Center for Health Policy at Duke University, expects the new legislation to improve that situation.

McClellan is also happy to see that the legislation gives the FDA more latitude to consider the needs and views of patients when weighing judgments.

Frank Sasinowski, at the law firm Hyman, Phelps & McNamara, notes that the laws governing the FDA didn't even mention patients until 2008 — more than 100 years after the agency was founded. The entire system was geared toward pharmaceutical companies and makers of medical devices.

"This bill, if it were to become law, would even give more prominence to the role of the patient in this process," he says.

Sasinowski, who has represented the pharmaceutical industry, also lauds the part of the 21st Century Cures Act that would help the FDA fill more than 600 vacant positions — jobs that have remained open because the pay hasn't been competitive.

At the moment, Sasinowski says, "it's impossible to find good people to come to the FDA even though it is maybe the most important public health function in our nation." If the bill sails through the House and Senate, as some analysts expect, it could reach President Obama's desk before the end of the year.