Accessibility links
Homeopathic Labels Will Have To Say There's No Proof They Work : Shots - Health News The Federal Trade Commission told purveyors of homeopathic remedies that they have to say there's no scientific evidence that these nostrums actually work. The question is, will fans care? 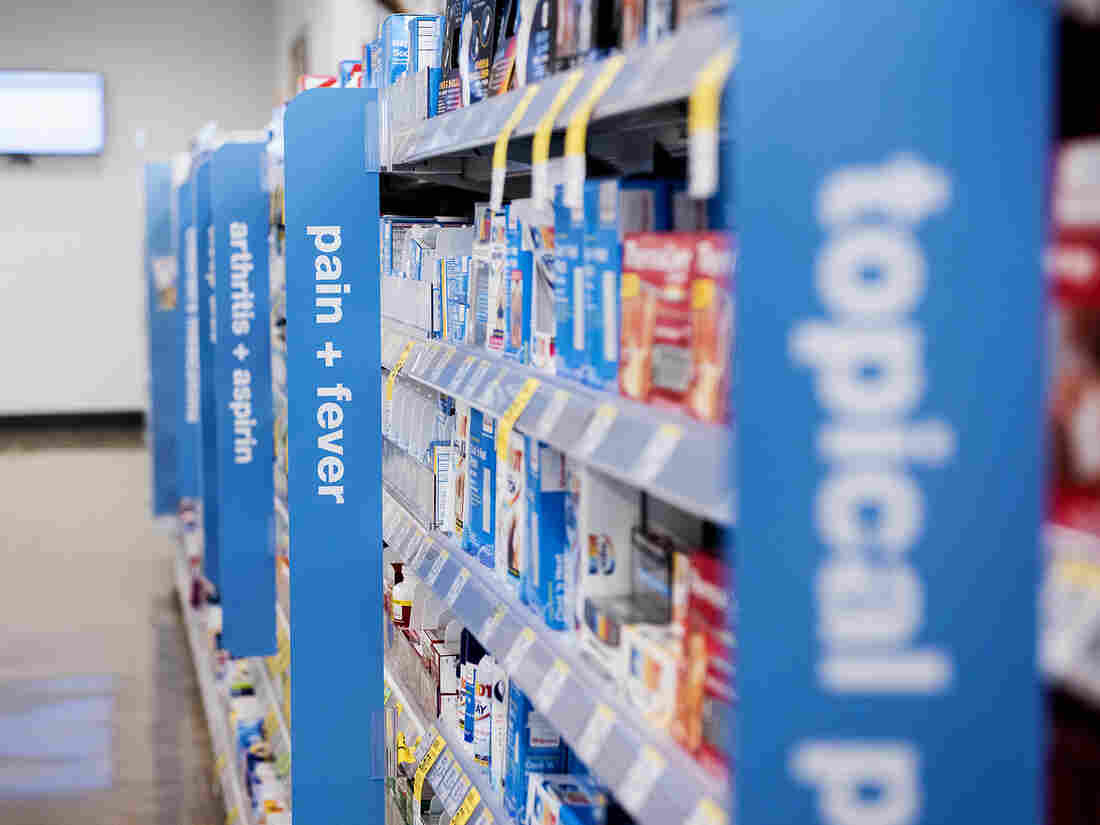 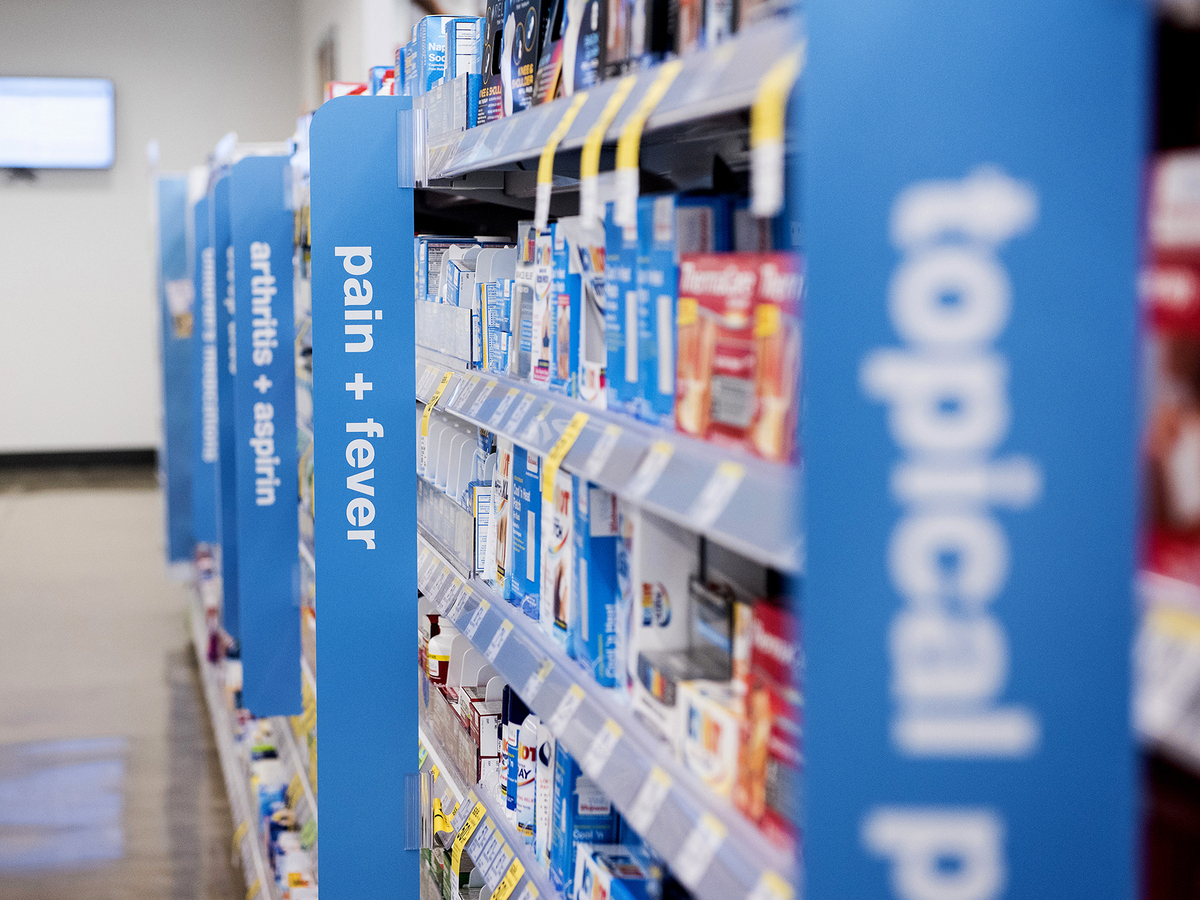 Drugstore shelves carry medications approved by the Food and Drug Administration as well as unregulated supplements and homeopathic remedies.

Homeopathy has been around since the 1700s, but despite having devoted followers, there is no scientific evidence that it works. Soon, packages for homeopathic products might say just that.

On Nov. 15, the Federal Trade Commission released an enforcement policy statement about labeling for over-the-counter homeopathic products. Homeopathic treatments have increasingly been marketed in drug store and supermarket aisles, alongside Food and Drug Administration-approved over-the-counter medications like Tylenol and Mucinex.

Homeopathy is based on the notion that "like cures like." Remedies include a tiny amount of a substance that might spark similar symptoms, but the amount in most products is so small as to be undetectable. Because they're sold next to medications, the FTC believes that they need to be held to the same labeling standards when it comes to making medical claims on their packaging.

And the FTC outlined very specific ways to do so.

First of all, the people producing the remedies need to be able to provide evidence that they work. If they can't, they need to add a disclaimer to packaging that says "there is no scientific evidence that the product works" and "the product's claims are based only on theories of homeopathy from the 1700s that are not accepted by most modern medical experts."

According to Richard Cleland, assistant director of the division of advertising practices at the FTC, we might not be seeing that exact languages on boxes, but the products need to both say that their claims are not based on scientific evidence, and also say what they are based on. 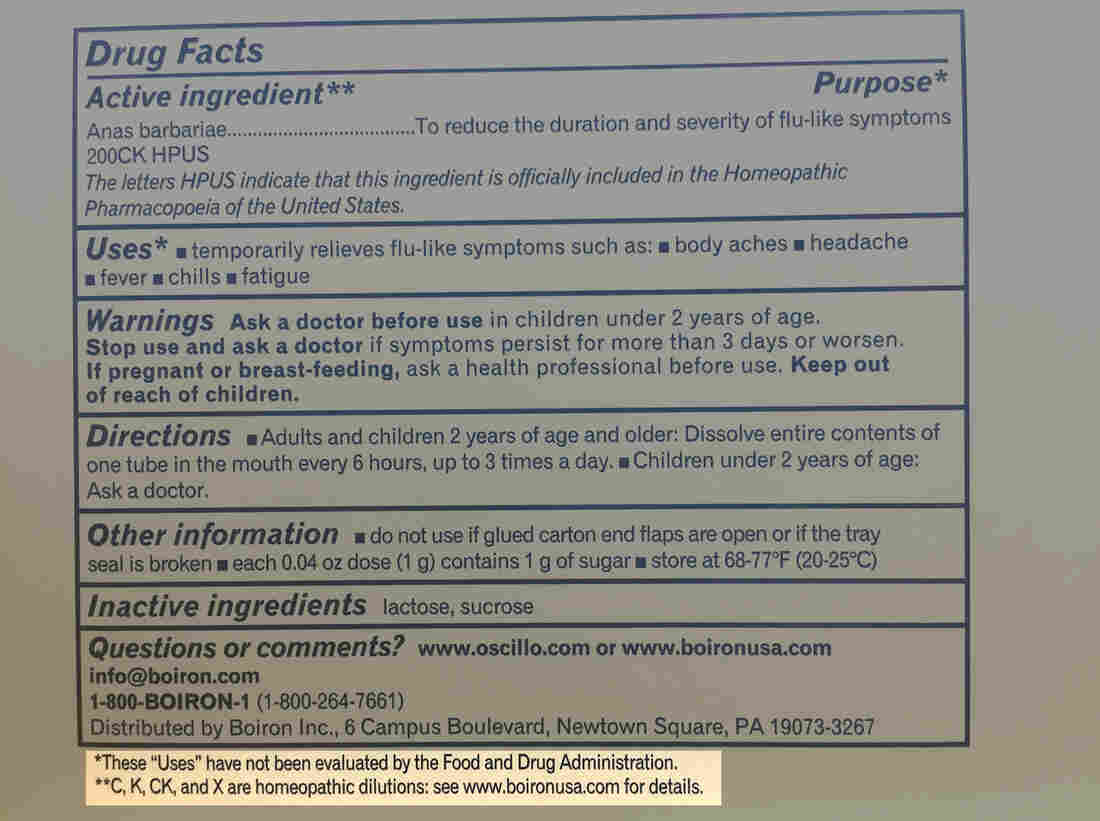 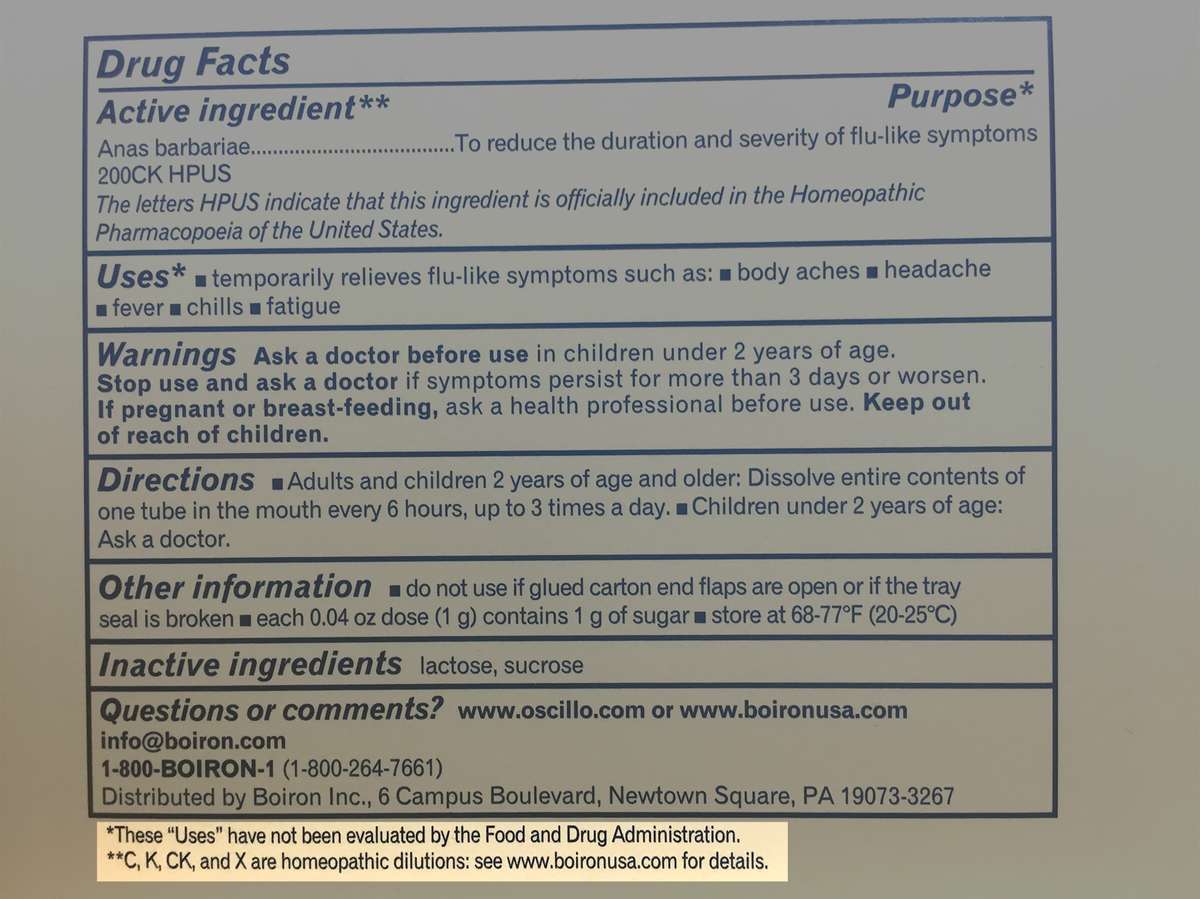 A current label on a homeopathic remedy.

"And they can't just say that it's based on homeopathic principles. People don't know what those are," says Cleland. So in some way, companies need to convey that that means 300-year-old widely-rejected theories.

The FTC didn't stop there. On the label, the disclaimer needs to be close to the medical claims the product is making, or even be incorporated into the claims themselves. There will be no hiding this message with a footnote at the bottom of the box or label.

It's unclear how long it will take for the FTC to take action against homeopathic products with misleading labels or packaging. In past cases, the FTC has waited several months after issuing an enforcement policy statement to allow companies time to comply or change their practices. Then they send warning letters, and eventually go after the most egregious offenders.

Understandably, the homeopathy community isn't happy with these regulations. But Skipp Neville, the president and CEO of Clear Products, a small company based in San Diego that makes homeopathic products, says he'll update the language on his packages — if his lawyers agree he should. "We follow the guidelines for what the FDA requires. The FTC, I can't speak on that — obviously there's legal issues."

The legal issue is this: Some people within the natural remedy community don't believe the FTC has jurisdiction to enforce claims on labeling. Daniel Fabricant, the executive president of the Natural Products Association, says that "this is a clear example of jurisdictional creep." 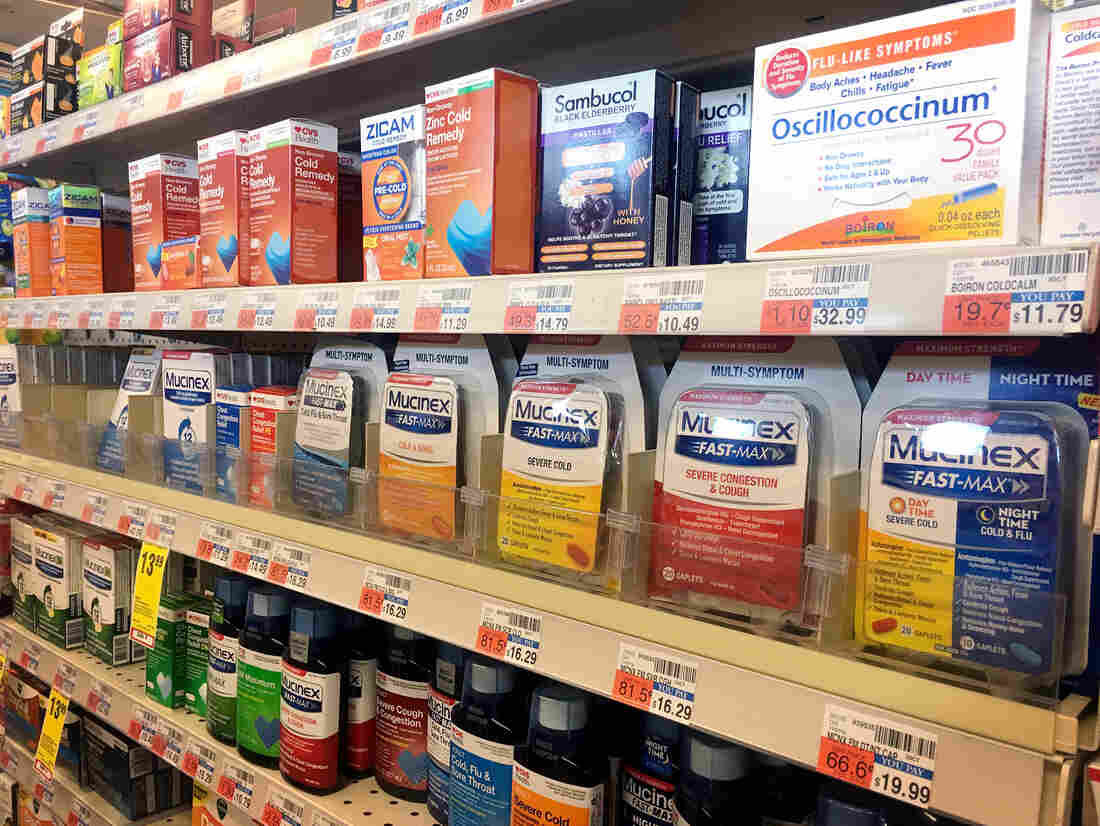 Drug stores increasingly sell homeopathic remedies, even though there is no scientific evidence that they have health benefits. Erin Ross/NPR hide caption 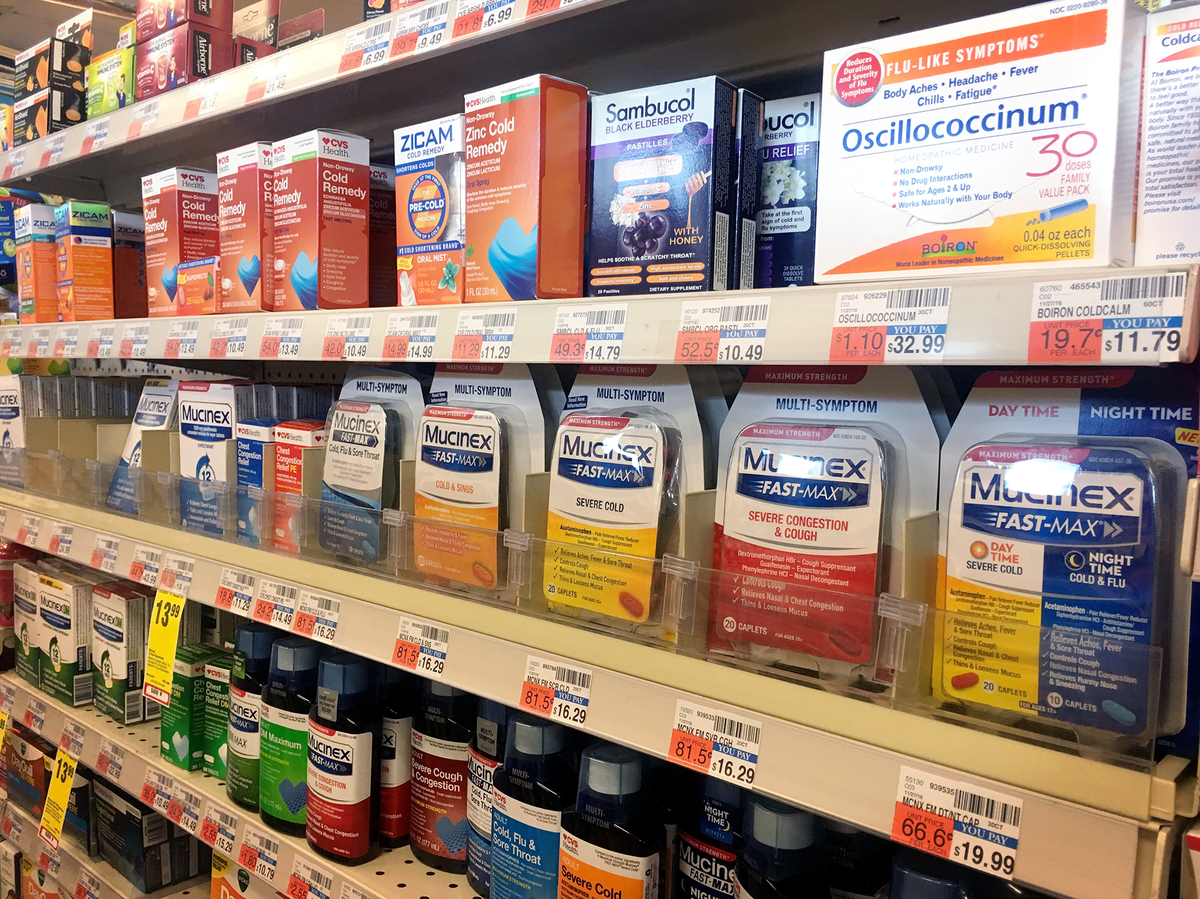 Drug stores increasingly sell homeopathic remedies, even though there is no scientific evidence that they have health benefits.

But the FTC disagrees, and so does Jonathan Turley, a law professor at George Washington University who teaches courses on labeling. "The FDA effectively struck a deal with the homeopathic industry that says they won't be regulated as other drugs, as long as they don't say they're FDA approved. Obviously, the FTC sees it differently."

And according to Turley, the FTC does have the ability to require certain label wording.

Still, Fabricant believes these new guidelines unfairly target homeopathic remedy manufacturers by requiring them to back up their medical claims with evidence like double-blind trials.

"Other products need to support their claims, so why shouldn't homeopathic products?" counters the FTC's Cleland. "They're not different; they're going to be held to the same standard."

Cleland doesn't think the labeling will necessarily dissuade people from purchasing homeopathic remedies, and that's not the FTC's goal. "We believe the consumer should have as much accurate information as they can before making purchasing decisions."

Still, there's always the possibility that these labeling changes might make homeopathy fans like the products even more.

Some people who use alternative medicine are distrustful of traditional medicines. Learning that the product isn't supported by modern medicine might be just the endorsement they need.