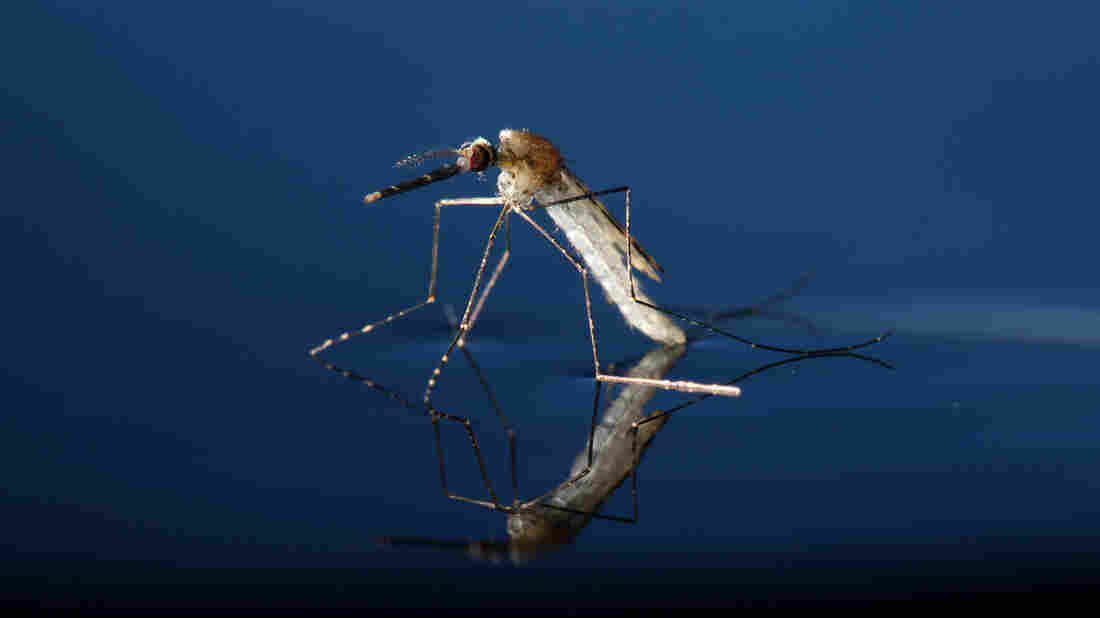 After reaching adulthood, a mosquito emerges from the water looking for trouble. Courtesy of Andrew Hammond hide caption 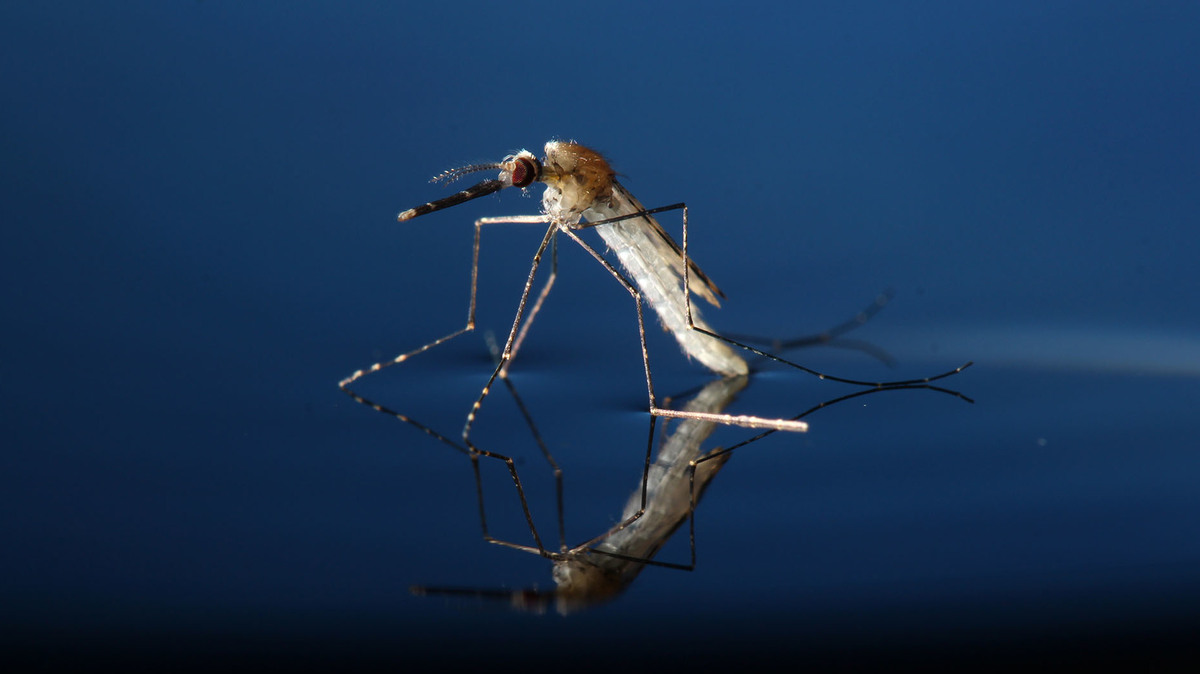 After reaching adulthood, a mosquito emerges from the water looking for trouble.

It's a cold, damp fall day in London. But in a windowless basement laboratory, it feels like the tropics. It's hot and humid. That's to keep the mosquitoes happy.

"In this cage, we have the adult mosquitoes," says Andrew Hammond, a genetic engineer at Imperial College London, as he picks up a container made out of white mosquito netting.

The lab is buzzing with hundreds of mosquitoes. "Everything in this cubicle is genetically modified," Hammond says, pointing to the container of mosquitoes.

What makes these insects unusual is the way Hammond and his colleagues are modifying them. They're using a particularly potent type of genetic engineering called a "gene drive." These are sequences of DNA produced in the laboratory that defy the usual rules of genetics.

"These gene drives, they're able to copy themselves. So instead of half of the offspring inheriting the gene drive, almost all of them do," Hammond says. In other words, these DNA sequences drive a desired genetic change through subsequent generations.

It's why gene drives are raising both high hopes and deep concern.

Until now, scientists have generally tried to keep genetically engineered creatures from spreading their DNA — to prevent them from inadvertently damaging the natural world.

The technology is so powerful that Hammond and his colleagues are hopeful they can do something humanity has been trying to do for decades: Wipe out malaria.

Hammond's team is genetically engineering the Anopheles gambiae mosquito, which is the primary species that spreads the malaria parasite. Nearly all of the offspring of the modified mosquitoes inherit mutations that knock out the genes females need to make eggs.

"If we can sterilize the females," he says, we "can actually eliminate a whole mosquito population without affecting those mosquitoes that don't have the capability to transmit malaria." 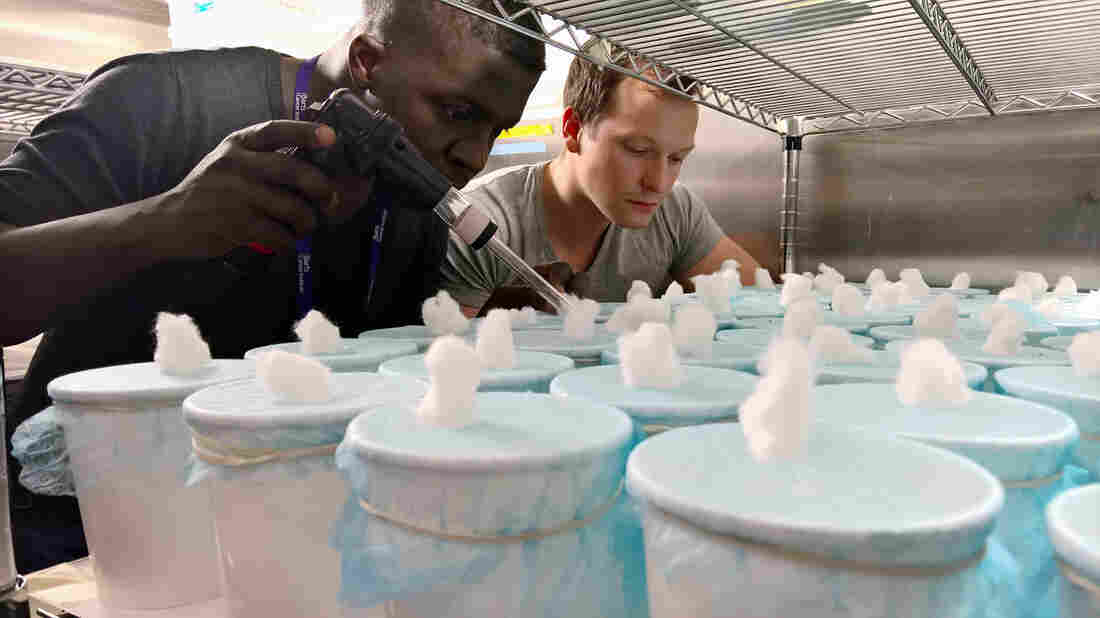 (The research is funded by the Bill & Melinda Gates Foundation, which also supports NPR.)

To show me how scientists create gene-drive mosquitoes, Hammond sits down in front of a microscope in a large darkened room and picks up a slide. The slide has dozens of tiny black specks on it. Each speck is a mosquito embryo.

Hammond maneuvers the slide to get the angle he needs to insert a thin glass needle filled with a DNA solution into the part of the embryo containing the cells that lead to egg development.

"We're going to use this to modify the genome and integrate into it our gene drive," he tells me as he advances the needle a tiny bit at a time, using a motorized device to help with the delicate task.

To integrate the gene drive into the mosquitoes' genetic code, Hammond is using an editing technique called CRISPR-cas9. The technology allows scientists to make precise changes in DNA much more easily and faster than before.

Still, it's tricky work. Mosquito embryos dry out quickly. Hammond has less than an hour to make the genetic changes. "You need to be very quick when you put the needle inside," he says. "And you need to inject just the right amount of DNA. Too much will kill it and too little won't modify it."

Besides a gene drive, the mosquitoes also get a gene that makes their eyes and other parts of their bodies glow red under laser light if the gene drive has taken hold.

Hammond can edit the genetic code of hundreds of mosquito embryos in a few hours. Many of the embryos mature into adults and then mate with normal mosquitoes. Hammond checks the resulting larvae under another microscope that lights them up with a laser.

He illuminates one of the gene-drive mosquito larvae magnified on a large screen. It looks like a huge radioactive worm.

"It's definitely working," he says. "We can see it glowing up in the eyes. And glowing down the body. It's beautiful — beautiful scientifically and beautiful visually."

Promise along with risks

Scientists are exploring how gene drives could be used to fight other diseases spread by mosquitoes and ticks. Two groups of researchers in California, for instance, are using gene drives to modify mosquitoes to fight dengue, Zika, chikungunya and also malaria.

Many scientists think gene drives could have their biggest impact on agriculture. Gene drives might, for example, enable researchers to quickly transform entire crops so that farmers don't need to use polluting pesticides.

Would It Be A Bad Thing to Wipe Out A Species ... If It's A Mosquito?

"This is our chance to solve some of the world's most pressing problems using biology," says Kevin Esvelt, a gene-drive researcher at the Massachusetts Institute of Technology.

But critics worry gene drives are just too powerful and could easily produce unintended consequences.

"It's a tool that has never been in our hands before," says Ricarda Steinbrecher, who works at EcoNexis, a watchdog group based in Oxford, England. "It is a high-risk technology." Ecosystems are complex and unpredictable, she says. She worries that eliminating an entire species could set off a cascade of unexpected effects that could result in the "collapse of ecosystems."

Some also worry the technology could be misused.

"This potentially could be a way of creating some quite nasty bioweapons," says Jim Thomas of the ETC Group, another genetic watchdog group, based in Montreal. "You could engineer an insect, a stinging insect for example, to deliver a toxin. Mosquitoes would be an obvious possible target. That would be a way that you could weaponize this technology."

Some scientists are trying to develop antidotes to gene-drive modifications, just in case one does run amok someday.

"We don't know what some of the unintended consequences might be," says Renee Wegrzyn of the Defense Advanced Research Projects Agency, which is funding the antidote work. "If we introduce a gene drive into the environment, then how can we reverse that tool if it has an unintended consequence? Can we demonstrate that we can turn those gene drives off at will?"

The Imperial College scientists working with gene drives acknowledge they could be dangerous. So they have taken steps to ensure none of their modified mosquitoes escape and breed with any wild counterparts until their safety has been established.

The researchers aim to find the most effective gene-drive mosquitoes, and to develop a step-by-step testing strategy to minimize any risks. Their work could take years, they acknowledge. 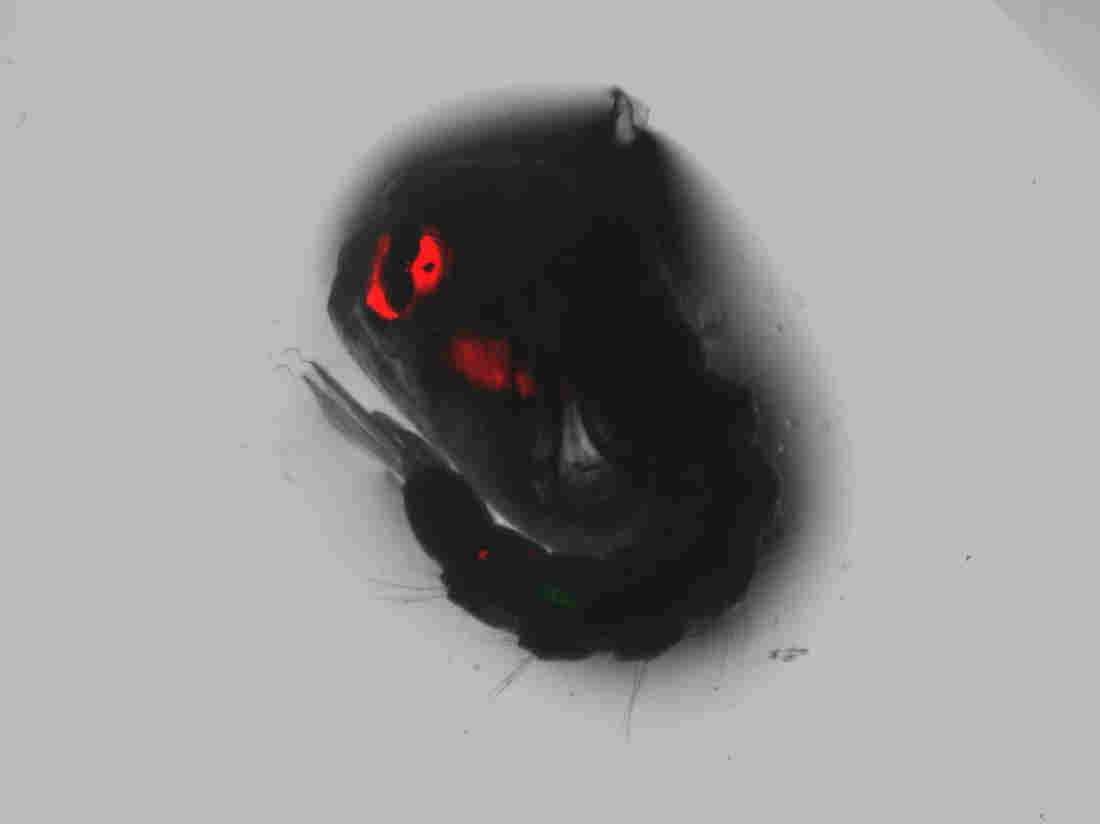 When Andrew Hammond modifies mosquitoes with gene drives, he also inserts a gene that causes the eyes of the mosquito pupa to glow red when illuminated with a laser. Courtesy of Andrew Hammond hide caption 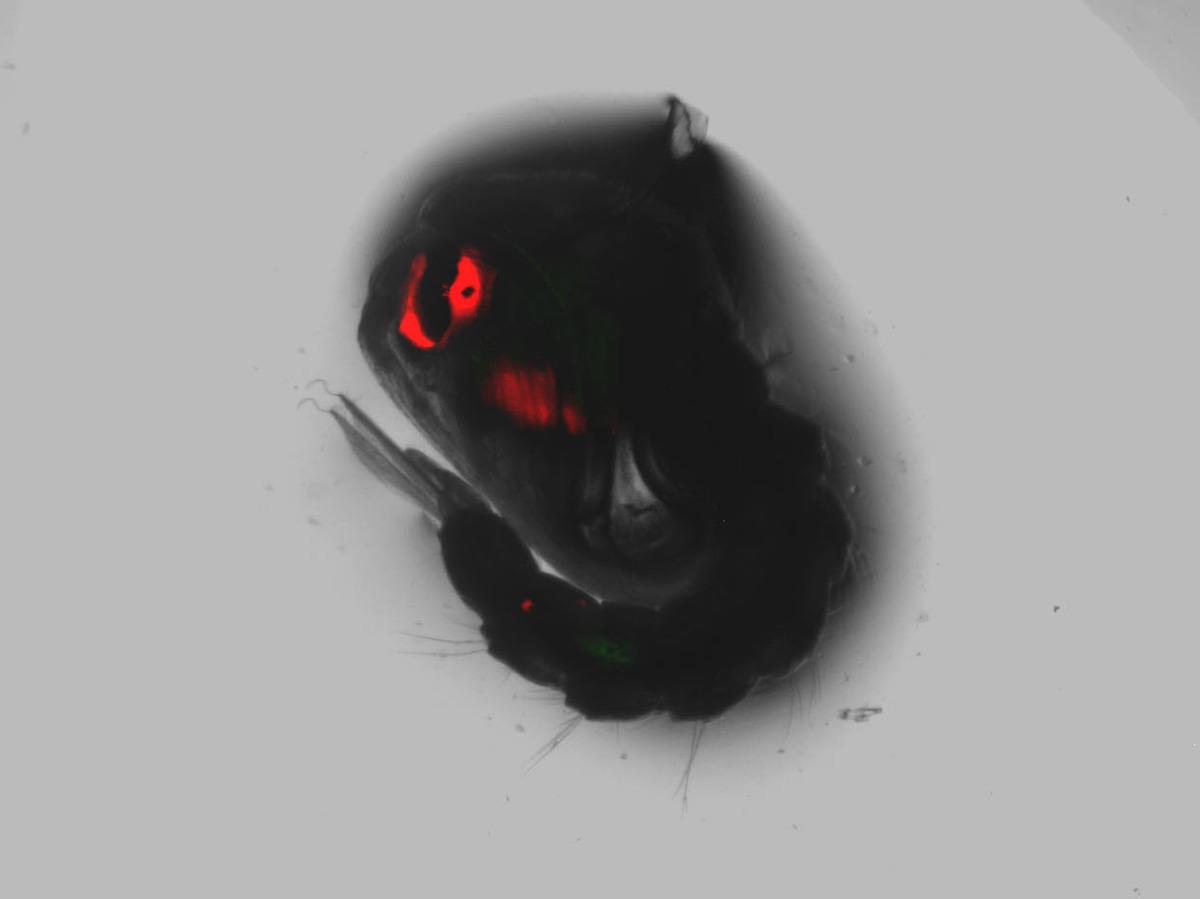 When Andrew Hammond modifies mosquitoes with gene drives, he also inserts a gene that causes the eyes of the mosquito pupa to glow red when illuminated with a laser.

Only if they are successful would the researchers seek approval from countries to release modified insects into the wild.

In the meantime, the group has begun outreach in Africa to make sure people are willing to let field tests begin someday. "We don't work in an ivory tower," says molecular biologist Tony Nolan, Hammond's supervisor. "We are fully aware of people's concerns on this."

But, he says, the potential for improving public health is substantial. "We've got to weigh up the benefits whenever you consider risks," says Nolan, noting that 500,000 people die every year from malaria, including many children. "I think it's a worthwhile goal to investigate this technology."