Accessibility links
A Bill To Repeal Obamacare Might Not Hit Trump's Desk By Jan. 20 : Shots - Health News GOP leaders hope to deliver a bill by Inauguration Day that repeals the Affordable Care Act. But budget veterans say even the quickest attempt would take a week or two longer, and maybe months. 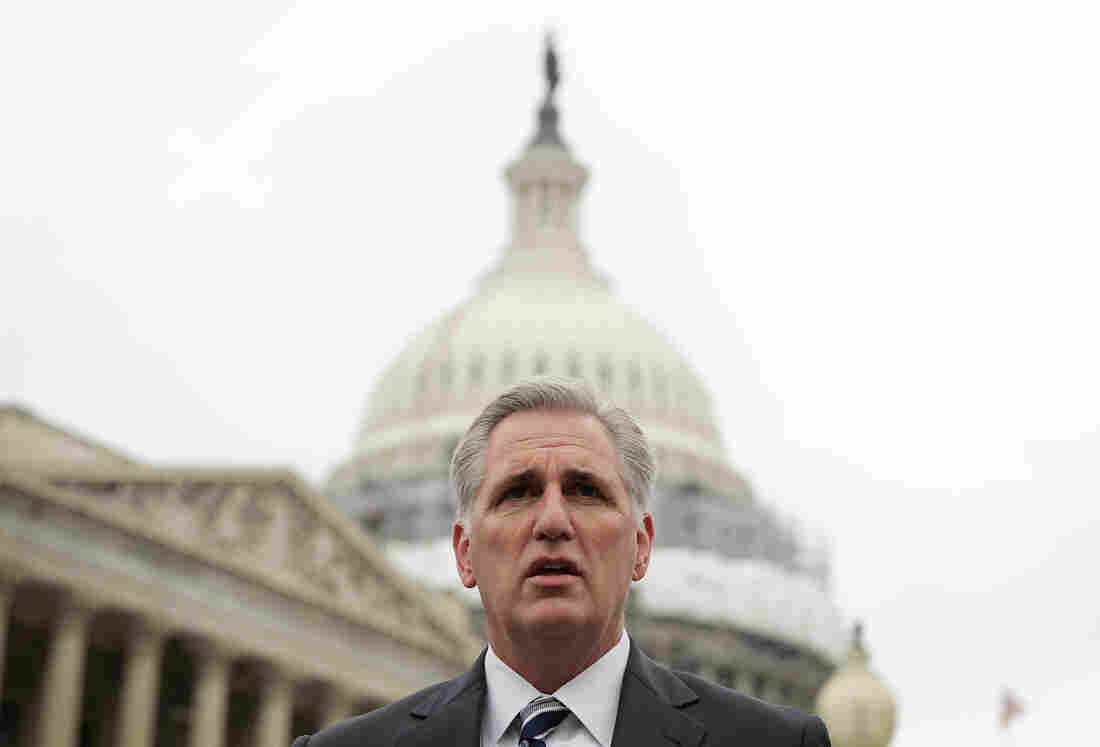 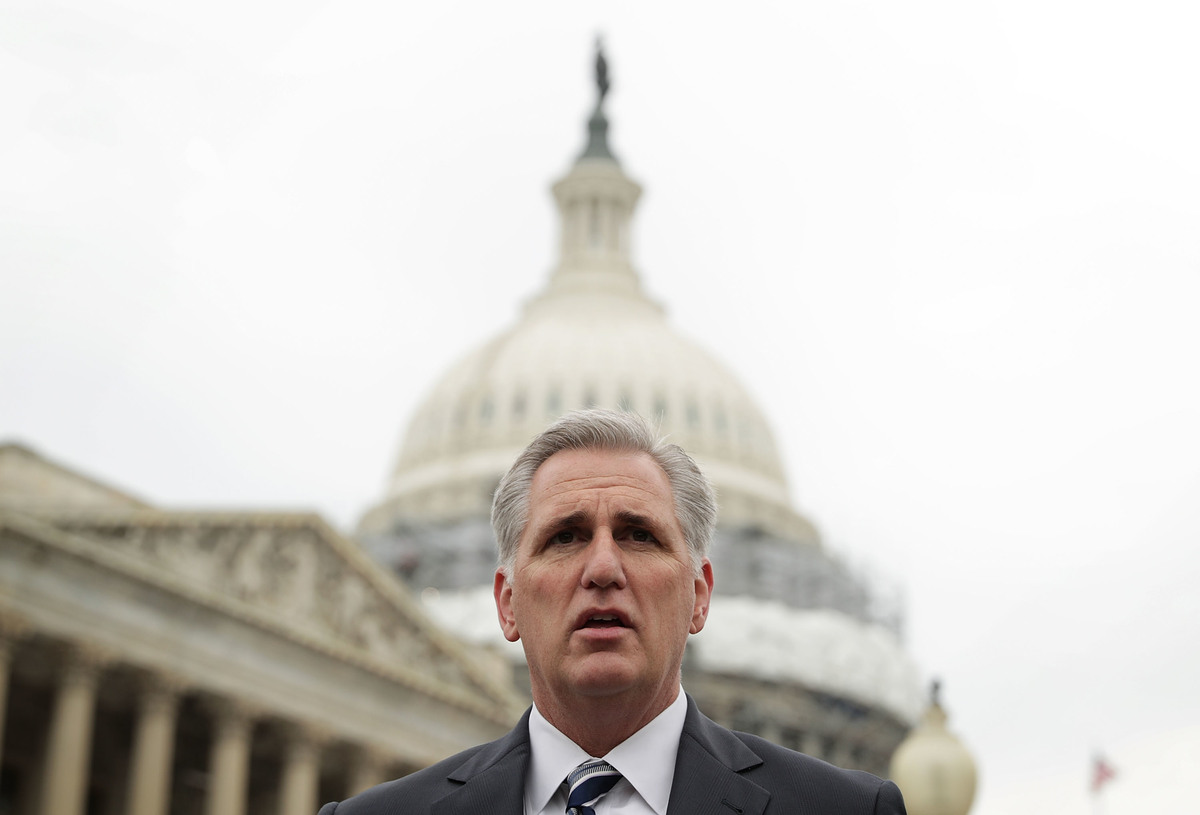 House Majority Leader Rep. Kevin McCarthy, R-Calif., is part of the Republican leadership working to repeal the Affordable Care Act as quickly as possible in January.

Republicans in Congress are so eager to repeal the Affordable Care Act that some have vowed to get a bill to President-elect Donald Trump's desk on the day he takes the oath of office.

"We will move right after the first of the year on an Obamacare repeal resolution," Senate Majority Leader Mitch McConnell, R-Ky., told reporters at a news conference Monday.

But could lawmakers introduce and pass a repeal measure in the 17 days between Jan. 3, when they convene, and Inauguration Day, Jan. 20?

Others think it could be done, but probably won't be. "Mechanically they can get it done," says Ed Lorenzen, senior adviser to the nonpartisan Committee for a Responsible Federal Budget. "The bigger question is, can they decide what should be in the package?"

Republicans and the incoming Trump administration have been careful not to talk about exactly what they plan to do to the Affordable Care Act beyond repealing virtually all of its coverage expansions and the taxes that help fund them. But they seem to be coalescing around a strategy of repeal and delay, in which they would pass a bill to kill many of the major provisions of law by a certain date, then set to work on crafting and passing a replacement before that date arrives.

In House Majority Leader's Home District, Many Depend On Health Law He Wants To Scrap

It would be quicker for Congress to simply repeal the health law outright. But Republicans can't do that, because they would need 60 votes in the Senate to fend off Democrats' delaying tactics, and they will have only 52 GOP members. So instead they will be limited to using a special budget strategy that will let them pass their bill with 51 votes.

That's called budget reconciliation, and the strategy does not let lawmakers repeal the entire law — only the parts that directly impact federal spending. It's been widely discussed as something the Republicans might attempt, but there has been less focus on how long the process takes.

No one in Congress can simply introduce a budget reconciliation bill. The word "reconciliation" refers to the process by which congressional committees that control permanent spending programs such as Medicare and Medicaid, as well as tax policy, take action to reconcile that spending with the terms of the annual budget resolution.

That means the first action must be to pass a budget resolution, which Congress failed to do last year. That is the resolution McConnell was referring to in his Monday remarks to reporters.

The budget resolution, which is essentially a planning document for spending and taxes for the coming fiscal year, does not go to the president for a signature. But like a regular bill, it does have to be passed by both the House and Senate in the same form. And while the budget resolution also may not be filibustered in the Senate, lawmakers have up to 50 hours to debate it and unlimited time to vote on proposed amendments, which in practice can take up to another full day.

Once that measure is agreed to by the full House and Senate, the action moves back to congressional committees. The budget resolution often includes reconciliation instructions to committees. Those instructions order proposed legislative changes to the programs the committees oversee, to meet the terms of the budget. That process triggers the reconciliation bill that goes to the president.

In the normal course of events, those changes take from several weeks to several months to accomplish. Legislative changes need to be written, voted on by the committee and reported back to the House or Senate budget committees, which then forward them to the House or Senate floor for votes. Again, Senate debate is limited to 20 hours, with unlimited additional voting on amendments. House and Senate negotiators then hammer out a compromise, pass it again in the full House and Senate and send it to the president.

The last budget reconciliation bill, considered a dry run by Republicans for the coming year, was launched by the budget resolution at the end of April 2015. The resulting reconciliation bill was sent to President Obama, who vetoed it, on Jan. 26, 2016.

Clearly, if Republicans were to simply recycle their 2015 bill, the process could be dramatically shortened. That bill called for repeal of funding for Medicaid expansion, as well as for jettisoning subsidies of health insurance premiums and other items that help individuals afford private coverage, along with the taxes to pay for those benefits, as of Dec. 31, 2017.

Predictions of getting the reconciliation bill to the president by Inauguration Day are ambitious, according to Stan Collender, executive vice president of Qorvis MSLGROUP, a Washington communications and consulting firm.

"It would be unprecedented to do it that quickly," says Collender, who has worked for both the House and Senate budget committees. "But just because it hasn't worked that expeditiously before doesn't mean they can't do it."

While Jan. 20 might not be feasible, "I think they could do it by the end of January," says Lorenzen. He notes that while some Republicans in the Senate have been expressing doubts about repealing the law without having a replacement in hand, and others in the House object to leaving current policies in place for as long as three years, "no one want to be the skunk that stops repeal."

But others think that even with a model bill in hand, the process will be harder — and take longer — than many Republicans are saying.

With last year's bill, "That repeal legislation, they knew they weren't shooting with real bullets," says Hoagland of the Bipartisan Policy Center. "They knew it was going to be vetoed."

Already, health analysts and health provider groups are warning that repealing major pieces of the law without immediately replacing them could cause a collapse of the individual insurance market that currently covers around 20 million people.

The risk of that collapse could — and should — slow things down, says Chris Jennings, a health consultant who worked in both the Bill Clinton and Obama administrations.

"Few people have ever been wrong projecting that Congress takes a little bit longer" than some predictions, he says. "I think this health debate is of such consequence, that will likely be the case for this as well."