Accessibility links
Infertile Couples Turn To Crowdfunding Sites To Get Treatment : Shots - Health News Infertility is often a private struggle. But some couples are going public — via crowdfunding sites — to help subsidize in vitro fertilization treatments that can cost as much as $20,000 each time. 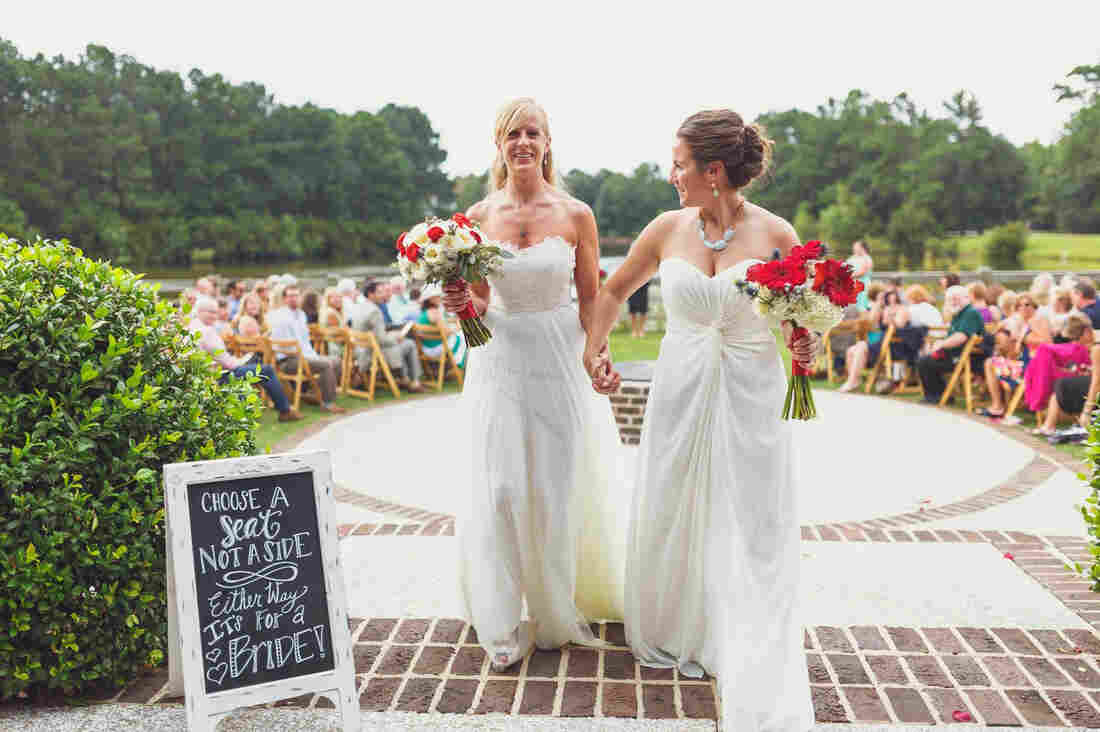 Janet (left) and Jackie Carter's wedding in August 2015. They set up a crowdfunding site to help defray the considerable costs of IVF. Courtesy of Brian Fancher Photography hide caption 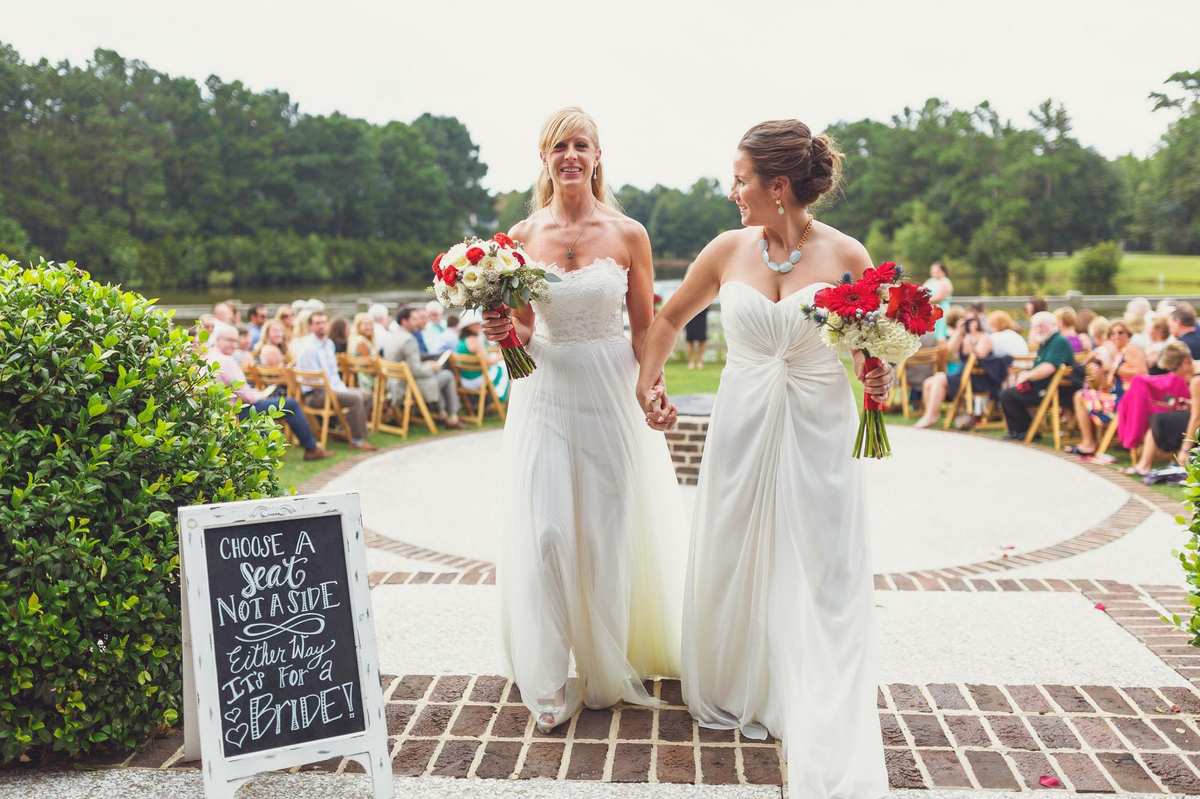 Janet (left) and Jackie Carter's wedding in August 2015. They set up a crowdfunding site to help defray the considerable costs of IVF.

Crowdfunding is a now a popular way to raise money for everything from birthday bashes to political protests. But on some of the big online fund raising sites, you'll find public pleas for something far more personal — infertility treatments.

Greg and Julia Fry of Ithaca, N.Y., were in their early 30s when they got married three years ago and set out to start a family. But a year passed and they didn't get pregnant. Six more months went by and, still, no baby.

So they consulted a medical specialist, Greg says. "And we wound up realizing that fertility treatments were what we would need."

They began with a less costly and less invasive option: IUI or intrauterine insemination. That's where sperm is inserted with a catheter directly into the woman's uterus at the time of ovulation. The procedure costs, on average, just under $1,000 a try. The Frys have tried four times in the past year — with no luck.

"This, by far, is the hardest thing that we've ever been through together," says Greg. "There is always hope going into every cycle. And that hope, sort of, gets dashed at the end of the cycle, and then we start again."

The next step they took was to try in vitro fertilization, or IVF. This involves fertilizing eggs with sperm in a laboratory dish, then transferring the embryo into the woman's uterus. It can cost $15,000 to $20,000 each try.

At first, Greg says, they thought about traveling overseas for more affordable treatments, but travel costs would have gobbled up any savings. So, they went online instead, to the crowdfunding site GiveForward. They posted a video in which they talk about their decision to ask for financial help.

"You know us as Julia and Greg," Greg begins. "The couple with so much love to give," Julia continues, and they alternate telling their story. 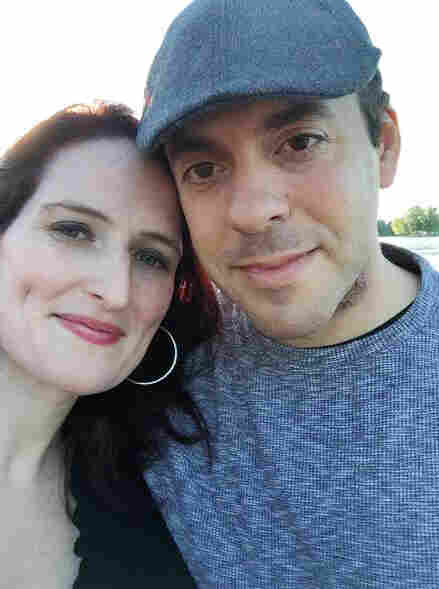 Julia and Greg Fry in August 2016. Each round of the IVF treatment they seek typically costs $15,000 to $20,000. So far, the couple has raised about $1,200 toward that goal via the crowdfunding site GiveForward. Courtesy of the Frys hide caption

toggle caption
Courtesy of the Frys 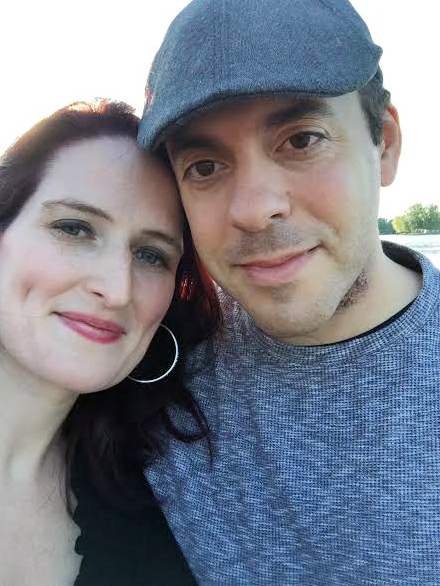 Julia and Greg Fry in August 2016. Each round of the IVF treatment they seek typically costs $15,000 to $20,000. So far, the couple has raised about $1,200 toward that goal via the crowdfunding site GiveForward.

Courtesy of the Frys

Asking for IVF assistance like this is one of the fastest growing crowdfunding categories, according to Josh Chapman, CEO of GiveForward. It's outpaced all categories except adoption at his firm in 2016, Chapman says, adding, "we believe this trend will continue into 2017."

Most health insurance doesn't cover treatments for infertility. That was the case for Janet Carter and her wife Jackie. They live in Charleston, S.C., and both have job-based health insurance.

Janet says their insurance was helpful for the diagnostic part of the process, but that was the extent of the reimbursement. "[The insurance] will cover anything that is testing beforehand, like any underlying issues that are leading to the need for fertility treatment. They do not cover any of the actual procedures at all," she says.

As their August, 2015 wedding approached, the couple asked their guests to consider giving them cash for fertility treatments.

"We not only had a regular registry for Target, but we also decided to have it be an option for our friends and family that wanted to be a part of us starting our little new family," Janet says.

The wedding guests gave them about $3,000, which they used to help pay for nine failed IUI attempts. Janet wanted to try asking friends again for money, this time for help with IVF. But, initially, Jackie wasn't so sure.

"Does it seem like we're begging, or asking people for money," she recalls wondering. "Am I ready to do that? Am I ready for people to be that involved?"

They asked friends for their opinions about crowdfunding, and the support was resounding, the women say, save for a wee bit of hesitation from Janet's mom.

"I realized, 'Hey, you know what? There are thousands of people out there using these crowdfunding sources for honeymoons and, you know, maybe things that aren't as impactful as having a child,' " she says.

The couple went forward with a site called, YouCaring.com, that's helped them raise about $5,000 so far.

Still, crowdfunding is hard for a lot of people, says Rachel Gurevich, who writes about fertility issues.

"I wouldn't do it unless you have a lot of social connections," she says. "A lot of people think that it's automatic — they're going to put it up and raise a bunch of money. And they're not — and that can be really disappointing."

Indeed, dozens of IVF campaigns on these sites show $0 raised. Both the Frys and the Carters received money from friends, family and some acquaintances, which is more typical for these crowdfunds, Gurevich says. Most donations range from $20 to $100.

Greg and Julia Fry's crowdfunding page has earned about $1,200.

"It's been very positive — everybody that I've worked with," says Julia. "People come up to me. And they've come into my office and they hand me $20," she says. "They say, 'We love you guys. We think you will be such great parents — please take it.' "

Their friend Jordanna Larish gave $50, even though she's unemployed right now. "Julia and Greg are incredibly generous people, always helping others," she writes in an email to NPR. "They've been trying for so long to have a baby, and they'll be excellent parents."

Jessie Simpson, who is friends with Jackie and Janet Carter, says she gave them $500 — "and a whole lot of prayers." Simpson was moved by how easy it was for her to have her son and how difficult it has been for her friends.

"Watching their struggle for over a year, all while the medical bills rack up each month, it was heartbreaking," Simpson writes to NPR. "That is the power of crowdfunding though — connect their story to your experiences and you want to melt in a puddle of tears and give them the shirt off your back."

The Carters are using their fundraising to pay down a credit card bill for their IVF. And Janet is now pregnant — their baby is due in June, 2017.