Accessibility links
Female Doctors Beat Male Counterparts In Caring For The Elderly : Shots - Health News If male doctors were as good as their female counterparts at caring for older people in the hospital, about 32,000 fewer patients a year would die. What do female doctors do better than men? 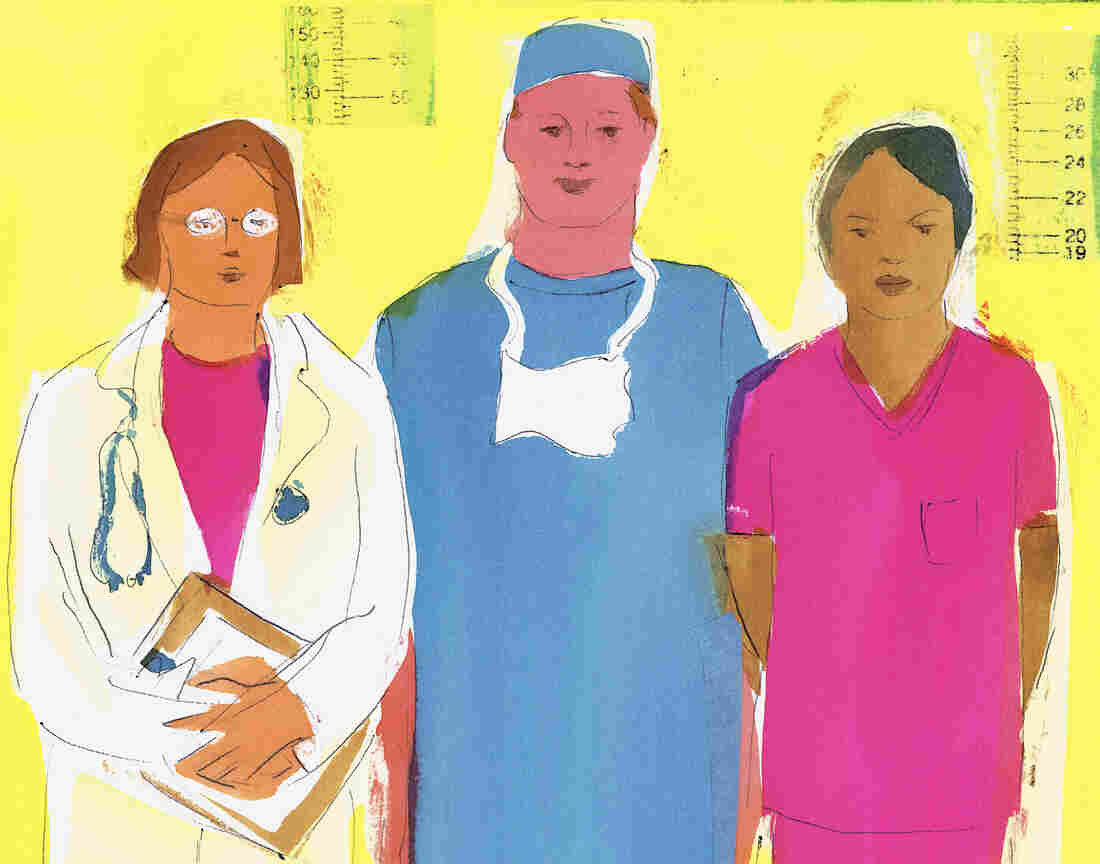 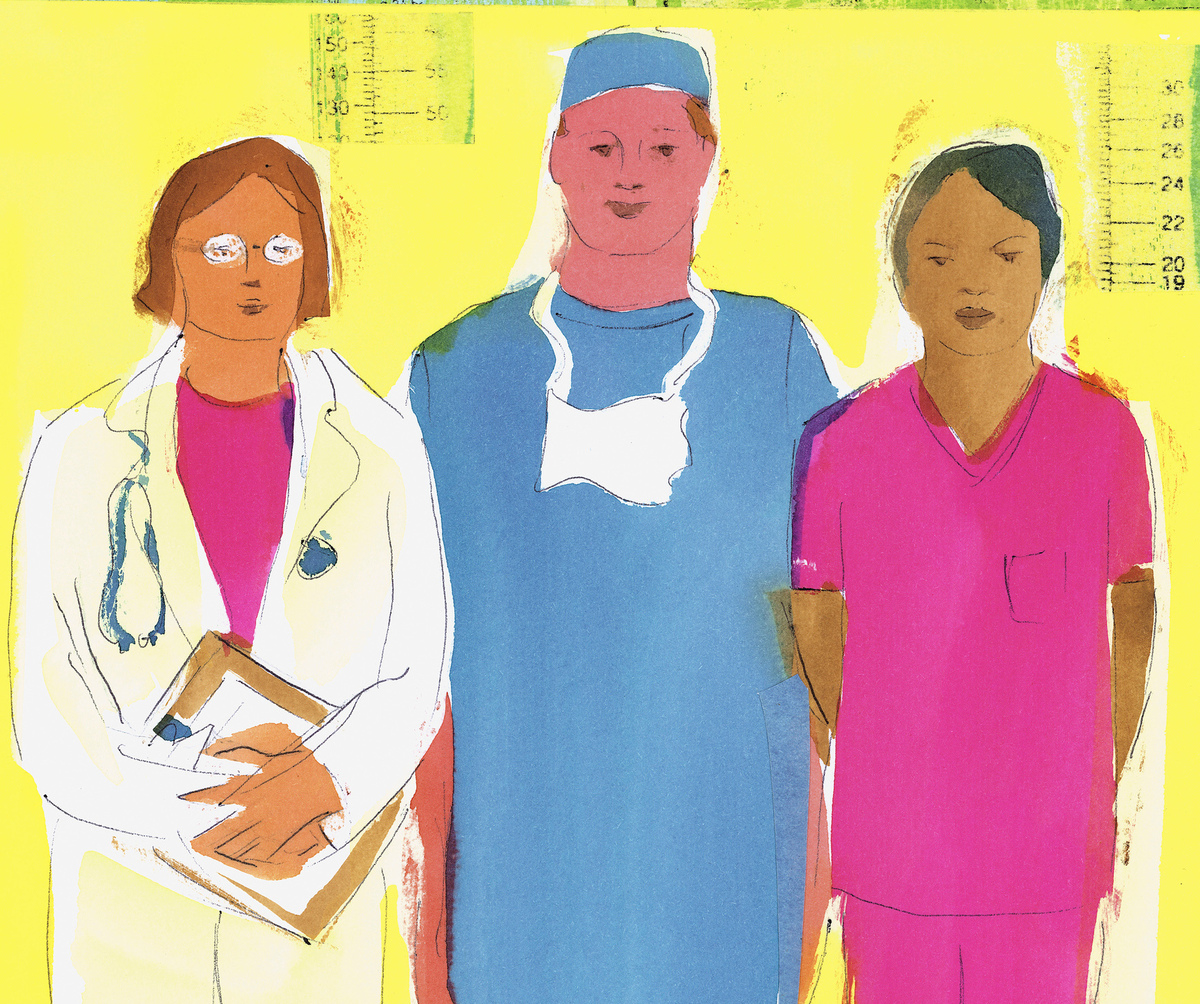 Elderly hospitalized patients taken care of by female doctors had better results than those seen by male doctors.

In a study that is sure to rile male doctors, Harvard researchers have found that female doctors who care for elderly hospitalized patients get better results. Patients cared for by women were less likely to die or return to the hospital after discharge.

Previous research has shown that female doctors are more likely to follow recommendations about prevention counseling and to order preventive tests like Pap smears and mammograms.

But the latest work, published Monday in JAMA Internal Medicine, is the first to show a big difference in the result that matters most to patients: life or death.

The study's authors estimate "that approximately 32,000 fewer patients would die if male physicians could achieve the same outcomes as female physicians every year."

"Of course! What did you expect?" replied the wife of Dr. Ashish Jha, the study's senior author, when he shared his team's findings with her. Jha said he expects a backlash over the study results. But his team's methodology, successfully put through multiple analyses, makes this work noteworthy, he added.

But tens of thousands of fewer deaths per year if we just went with female doctors?

Whoa! To us, a man and woman who met as we were getting our start in medicine, them's fightin' words.

An editorial about the study urges doctors to remedy the gender disparities in care and the pay gap that favors male physicians over women.

Since half the patients we treat are women and girls, it makes sense that at least half the physician corps should reflect the population. We've achieved that in medical school rolls, but overall only a third of practicing doctors are female. And many specialties, including orthopedics, cardiology and neurosurgery, are still dominated by men.

So why is there a gender-based difference in physicians' care? The authors admit that they are "unable to identify exactly why female physicians have better outcomes than male physicians."

We don't pretend to know for sure, but as married doctors, we have our hunches. We talked it over and here are our thoughts about the research.

Dr. Sarah-Anne Henning Schumann: The actual effect reported in the study is small, but multiplied over a huge population it does add up to something significant.

Dr. John Henning Schumann: I like the Big Data aspect of it. The authors said, "Let's look at more than a million Medicare patients over several years and see how they fared based on the gender of their doctor." While many people may want to tear this study apart, I think the findings make intuitive sense.

Sarah-Anne: I'm assuming the difference is because of the way that women, in general, communicate. It's about being better listeners, more nurturing and having emotional intelligence.

John: There are plenty of men who are good communicators.

Sarah-Anne: Yes, just as there are plenty of women who don't really have those qualities. For female doctors, having worked their way through pre-med, med school and residency, they can have some of that nurturing communication skill beaten out of them.

John: That happens to men, too!

Sarah-Anne: That's true. But this study shows us — just possibly — that if female doctors, on average, communicate better, their style might be more effective in treating disease and preventing death.

John: It's interesting to me because I think about some of my older patients, who much prefer that I tell them what to do rather than to discuss options and share decision-making.

Sarah-Anne: I think that traditionally men were the doctors. People often assume men are more intelligent and so would be more likely to take their advice.

John: That has to change, as we get closer to parity with women in the profession.

Sarah-Anne: My mother has had many experiences with male doctors where she feels they haven't listened to her. They aren't warm or kind, but she feels reassured anyway. She thinks they're smart, and what's most important to her is their knowledge and technical skill, not their bedside manner.

John: Mom always knows best, if that's what she values.

Sarah-Anne: Even in our family, we're both doctors. I'm a family doctor, trained to see adults and kids. You're an internist, trained to only see adults. And in both of our families, most of the time, our family members will reach out to you with their questions — even about kids. And my family, who attended my Harvard Medical School graduation, I'll remind you, seems to value your opinion more. They seem to be looking for opinions more from men. That's kind of an interesting thing.

John: I never really thought about that. I can see how that's totally male privilege. It has to be frustrating to be taken less seriously.

Sarah-Anne: I'm in a Facebook group of physicians who are moms. While it's not every doctor-mom in the country, there are over 60,000 of us in it. So many tell stories of being mistaken for nurses — and taking great offense at that. We have worked so hard to get where we are and want to be treated as equals to our male colleagues.

But I see the mix-up as a compliment rather than an insult. To be compared [to] a nurse says that patients are seeing me as someone who is caring for them and nurturing.

John: That's a smart way to reframe it. Our colleague Jill used to get angry when people assumed she was a nurse. Instead, she decided to embrace it and use it as a call to service. Now she asks patients if they need an extra blanket or something to drink. And she believes that she provides better, more empathic care.

Sarah-Anne: Everyone is going to want to know what is it about women that leads to these better outcomes. I think it's going to be hard to figure out exactly.

John: Do you think people that read or hear about this study will take home the message that they need to choose female doctors?

Sarah-Anne: Some will no doubt oversimplify it to that. What I take away is that if communication is the key, as I suspect, then we need to better select and train medical students and residents to exhibit these qualities.

John: Amen to that. What about equal pay for equal (or better!) outcomes? Paging Lilly Ledbetter!

Sarah-Anne: You're not really asking me that, are you?