Accessibility links
Aging And Addicted: The Opioid Epidemic Effects Older Adults, Too : Shots - Health News Doctors have commonly managed the persistent pain of people over 65 with prescription opioids. But that has left some still in pain, and with a physical and emotional dependence that can ruin life. 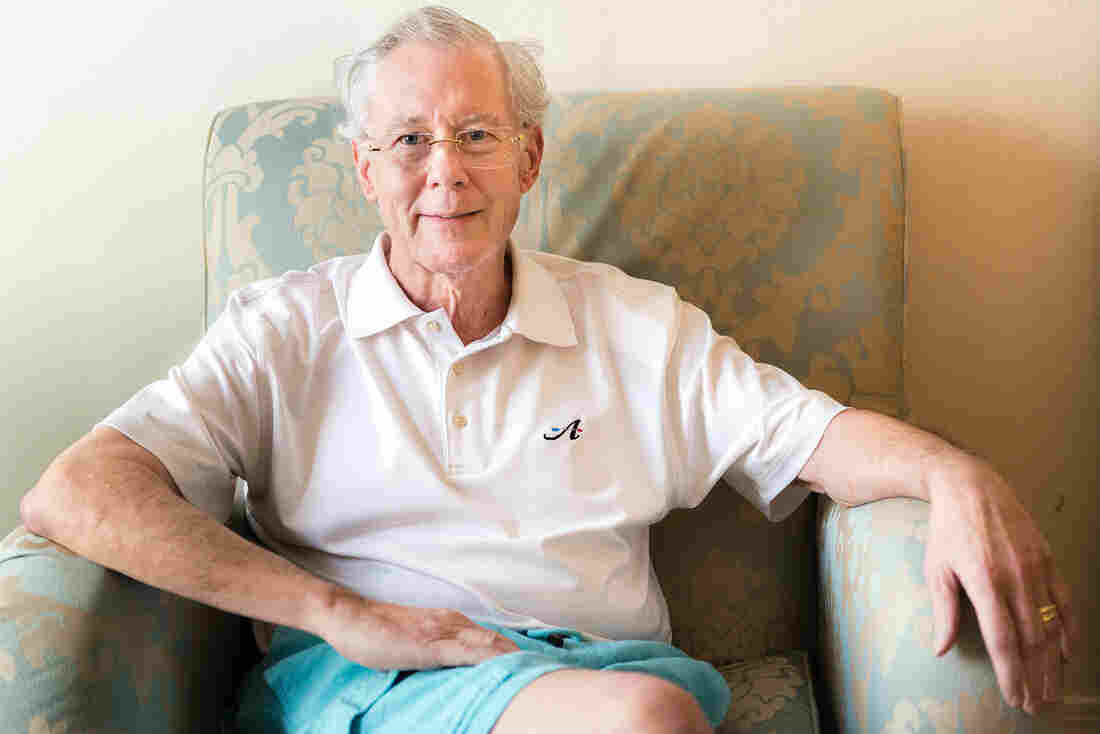 John Evard, 70, at the Las Vegas Recovery Center last July. Evard, a retired tax attorney, checked into a rehabilitation program to help him quit the prescribed opioids that had left him depressed, groggy and dependent on the drugs. Heidi de Marco/Kaiser Health News hide caption 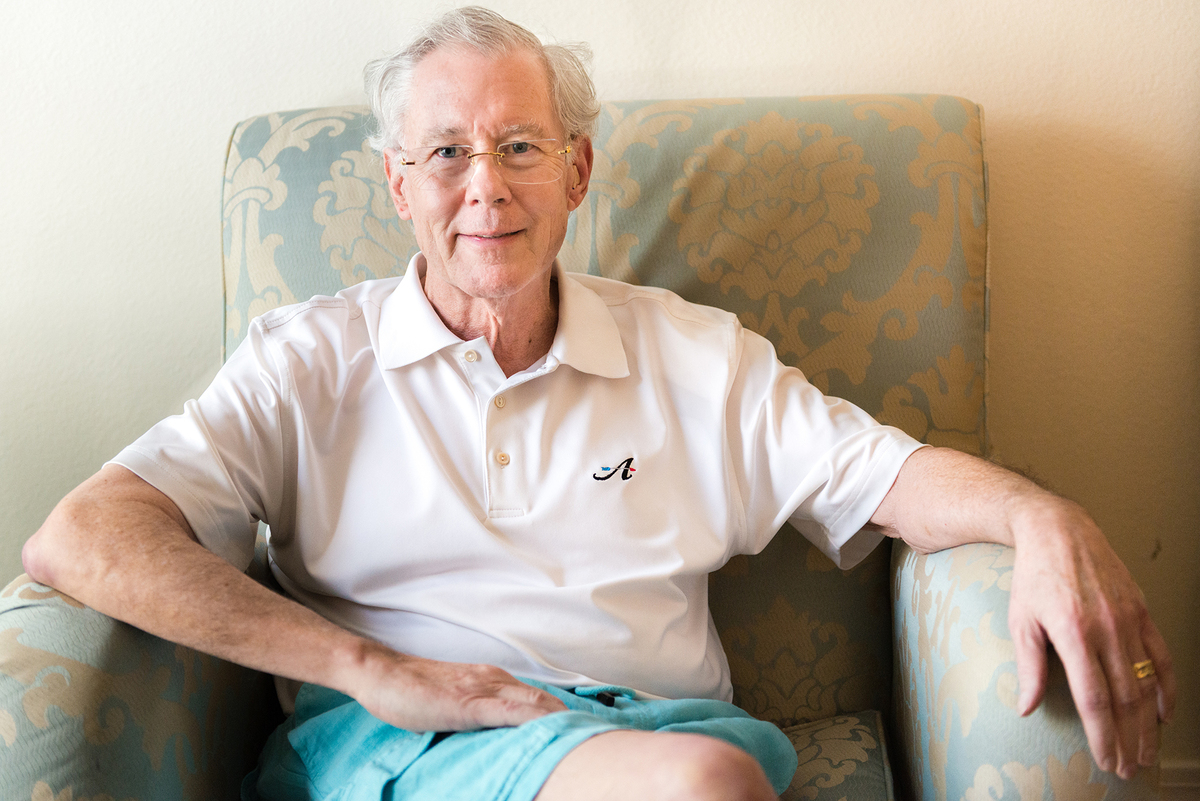 John Evard, 70, at the Las Vegas Recovery Center last July. Evard, a retired tax attorney, checked into a rehabilitation program to help him quit the prescribed opioids that had left him depressed, groggy and dependent on the drugs.

It took a lot of convincing to get John Evard into rehab. He was reluctant to give up the medications that he was certain were keeping his pain at bay. But ultimately he agreed — and seven days into his stay at the Las Vegas Recovery Center, the nausea and aching muscles of opioid withdrawal are finally beginning to fade.

"Any sweats?" a nurse asks him as she adjusts his blood pressure cuff.

"Last night it was really bad," he tells her, "but not since I got up." Evard, who is 70, says he woke up several times in the night, his sheets drenched with sweat.

Evard says it is hard to understand, even for him, how he ended up 300 miles away from his home in Scottsdale, Ariz., at this bucolic facility in the suburbs of Las Vegas. "This is the absolute first time I ever had anything close to addiction," he says. He prefers the term "complex dependence" to describe his situation.

"It was, shall we say, a big surprise when it happened to me," he says.

As the nation grapples with a devastating opioid epidemic, concerns have primarily focused on young people buying drugs on the street. But many elderly people in America also have a drug problem. Over the past several decades, physicians have increasingly prescribed older patients medication to address chronic pain from arthritis, cancer, neurological diseases and other illnesses that become more common in later life. And sometimes those opioids hurt more than they help.

A recent study of Medicare recipients found that in 2011, about 15 percent were prescribed an opioid when they were discharged from the hospital; three months later, 42 percent were still taking the pain medicine.

It's perhaps no surprise, then, that some, like Evard, end up addicted. 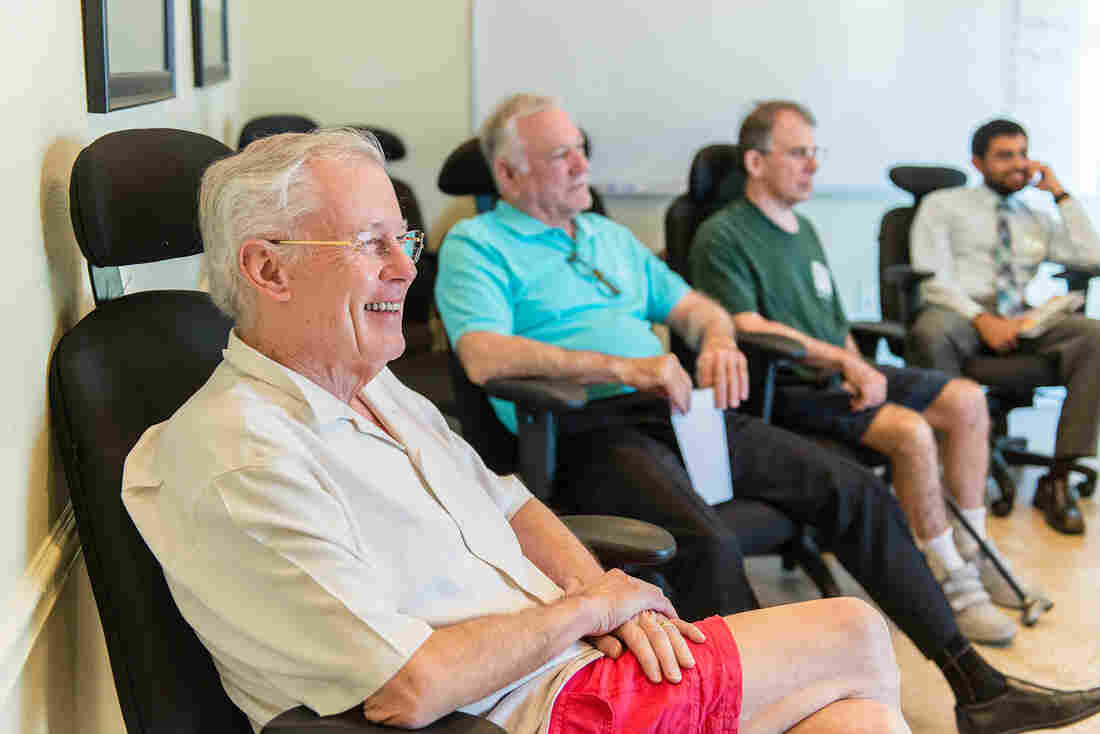 John Evard (left) participated in group therapy during his stay at the rehab center. He was prescribed increasing dosages of opioids to manage his pain, Evard says, but it didn't work, and he was unable to quit the pills on his own. "I was effectively housebound," he says. Heidi de Marco/Kaiser Health News hide caption 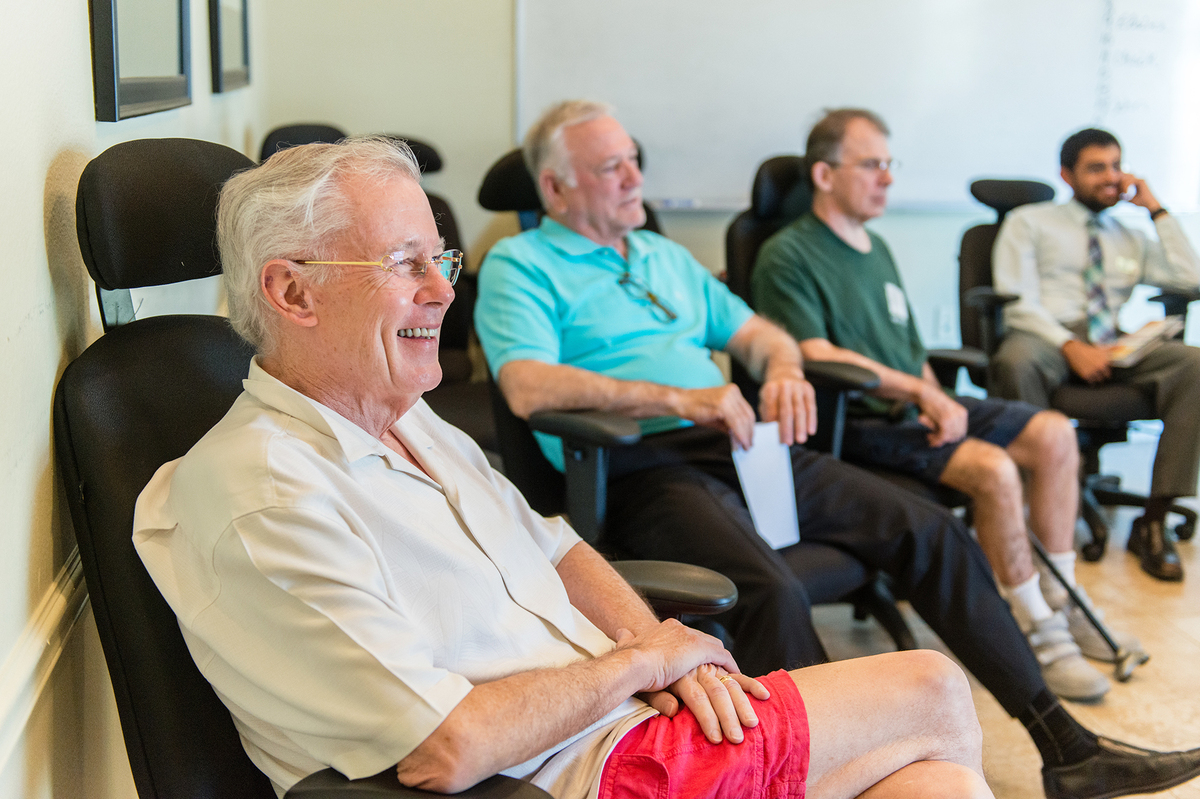 John Evard (left) participated in group therapy during his stay at the rehab center. He was prescribed increasing dosages of opioids to manage his pain, Evard says, but it didn't work, and he was unable to quit the pills on his own. "I was effectively housebound," he says.

Evard spent his life working as a corporate tax attorney. He's lively and agile, with a contagious grin. A few years ago he and his wife retired to Arizona with their eyes on the golf course. But the dream didn't last long. Just months into retirement, a virus infected Evard's left ear. Overnight, he lost half his hearing and was left with chronic pain. In January, he had surgery to fix the problem.

"From the surgeon's standpoint, the operation was successful," Evard recalls. "The problem was, the pain didn't go down. It went up."

His doctors prescribed opioids, including Oxycontin. "They decreased the pain, particularly at first," says Evard. "As time went on, [the pills] had less and less effect, and I had to take more and more."

As the doctors increased his dosage, in hopes of managing the pain, Evard's once active life fell apart. He was confused, depressed, and still in pain.

"I was effectively housebound," he says. "I couldn't play golf anymore. I couldn't go to social events with my friends or my wife."

He couldn't think of anything except the pills, focusing on when he'd be able to take the next one. He knew he was in trouble — despite having taken them exactly as his doctor instructed.

In 2009, the American Geriatric Society came out strongly in favor of opioids, updating its guidelines on pain management to urge doctors to consider using opioids for older patients who have moderate to severe pain. The panel cited evidence that seniors were less likely than others to become addicted.

Dr. Bruce Ferrell, a geriatrician and pain specialist at the University of California, Los Angeles, served as chairman of the panel that issued the AGS guidelines.

"You don't see people in this age group stealing a car to get their next dose," Ferrell told The New York Times at the time.

"There's no factual, scientific basis for that," he says. "The drug takes over in the brain. It doesn't matter how old the brain is."

The problem is that there aren't many good options to treat chronic pain as people age. Even aspirin and ibuprofen carry bleeding risks that can be serious.

The 2009 AGS guidelines are no longer in use, but opioid medications remain a crucial tool to treat pain in older people. And most people are able to take opioids in small doses for short periods of time without a problem.

"We really don't use opioids necessarily as the first line of treatment, because we understand what the risks are," says Dr. Sharon Brangman, past president of the AGS. "But we also don't want to see our patients suffering needlessly if we can provide them with relief." The trick, she said, is to first try non-pharmacological options such as acupuncture, and to use the smallest effective opioid dose possible.

Nonetheless, in the past 20 years, the rate of hospitalization among seniors that is related to opioid overuse has quintupled.

It took John Evard about a week to get over the vomiting and flulike symptoms of detox, which can be particularly hard on older patients. He still has some of the chronic pain that first led him to seek help from a doctor, he says, but he takes Tylenol to deal with it. He's speaking out now about opioids because he doesn't want other seniors to fall into the same trap.

"Don't just take the prescription because it's part of the checkout process from the hospital," he cautions. "It's your body. Take charge of it, and push for alternatives at all costs. And if you do go on, get off them as fast as you can."