Accessibility links
A Dying Man's Wish To Be An Organ Donor Runs Into Lawyer Trouble : Shots - Health News Dying in America doesn't always go the way we plan. One terminally ill man's hope to be disconnected from his respirator and donate his organs was almost thwarted, despite his best laid plans. 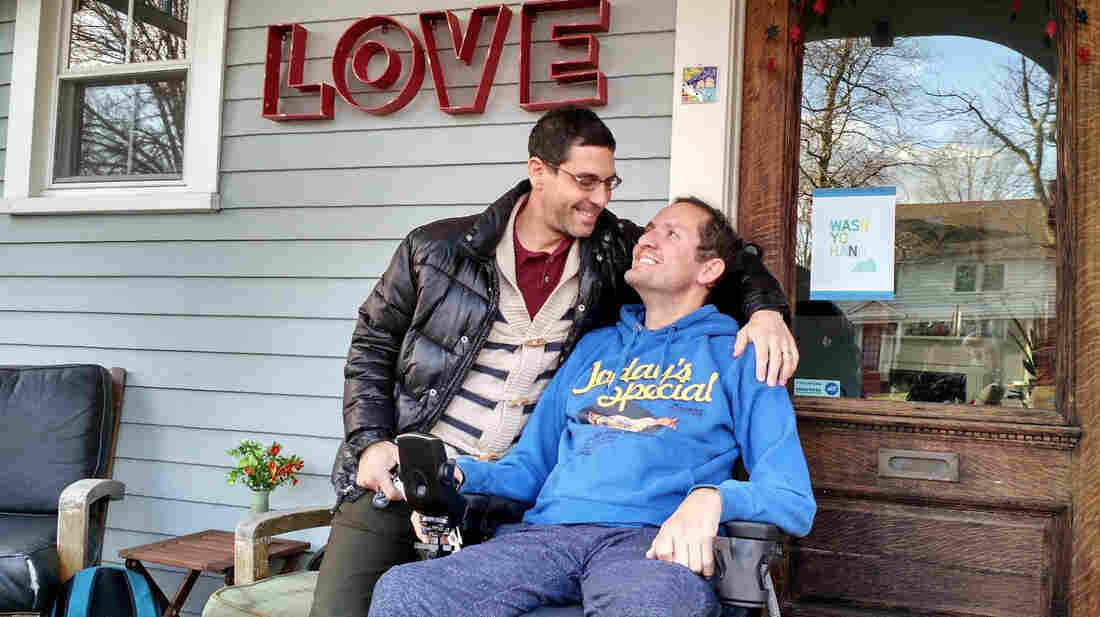 Dave Adox, right, and his husband Danni Michaeli at their home in South Orange, N.J., in the fall of 2014. Adox was diagnosed with ALS at age 42 and became almost totally paralyzed within six months. He died last May. Courtesy of Evan Bachner hide caption 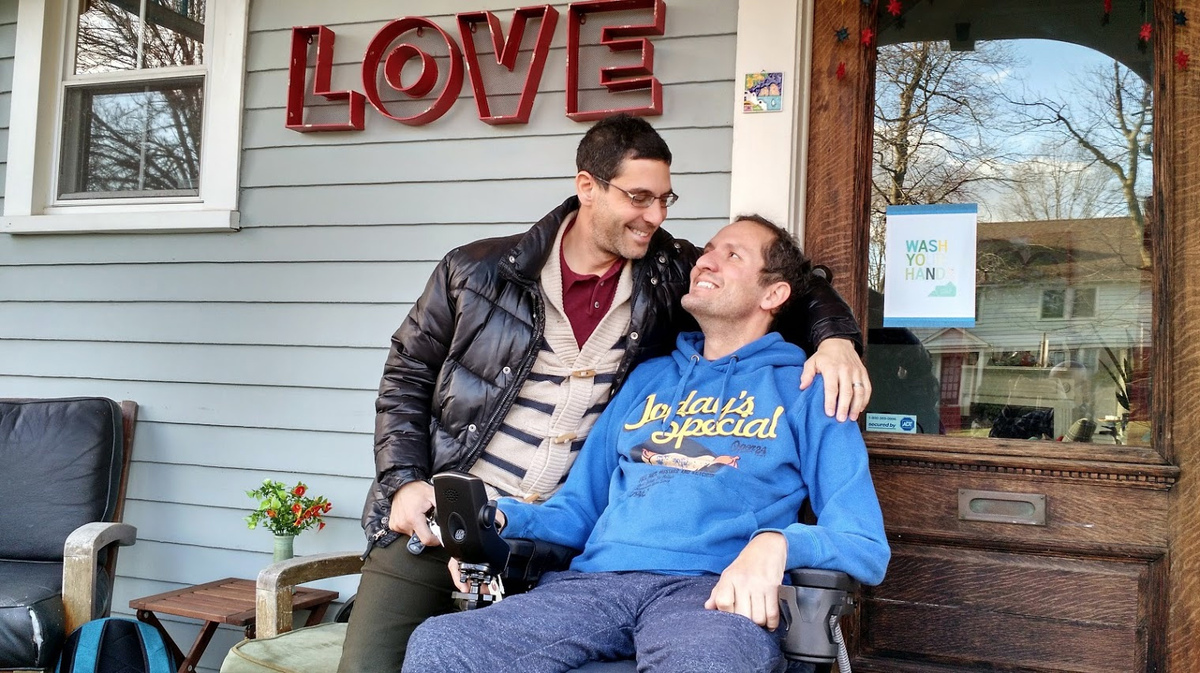 Dave Adox, right, and his husband Danni Michaeli at their home in South Orange, N.J., in the fall of 2014. Adox was diagnosed with ALS at age 42 and became almost totally paralyzed within six months. He died last May.

At 44 years old, Dave Adox was facing the end of his two-year battle with ALS, also known as Lou Gehrig's disease. He needed a ventilator to breathe and couldn't move any part of his body, except his eyes. Once he started to struggle with his eyes — his only way to communicate — Adox decided it was time to die.

He wanted to donate his organs, to give other people a chance for a longer life. To do this, he'd need to be in a hospital when he went off the ventilator.

"I was always interested in organ donation and had checked the box on my license," Adox said last spring at his home in South Orange, N.J., through a machine that spoke for him. He laboriously spelled out these words, letter by letter, by focusing his eyes on a tablet. Adox had spent a career with words that now came slowly — he was a freelance reporter, including for public radio, then went on to work in advertising.

"When I got diagnosed with ALS at 42, and the disease paralyzed my entire body in six months, I definitely developed a greater appreciation of the value of the working human body," he said. 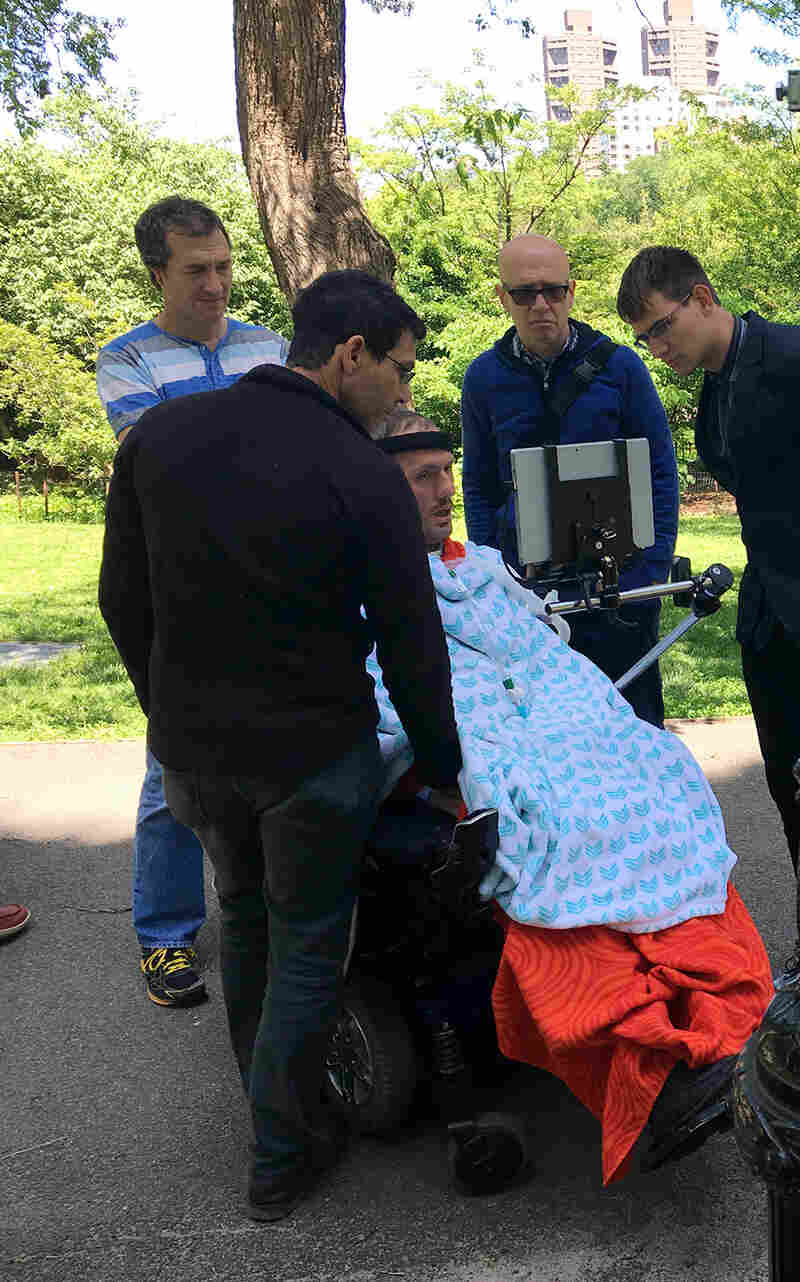 Family members surround Adox on the day that he died last May. His wish to die in a hospital so that he could donate his organs turned out to be difficult to fulfill. Karen Shakerdge/WXXI hide caption 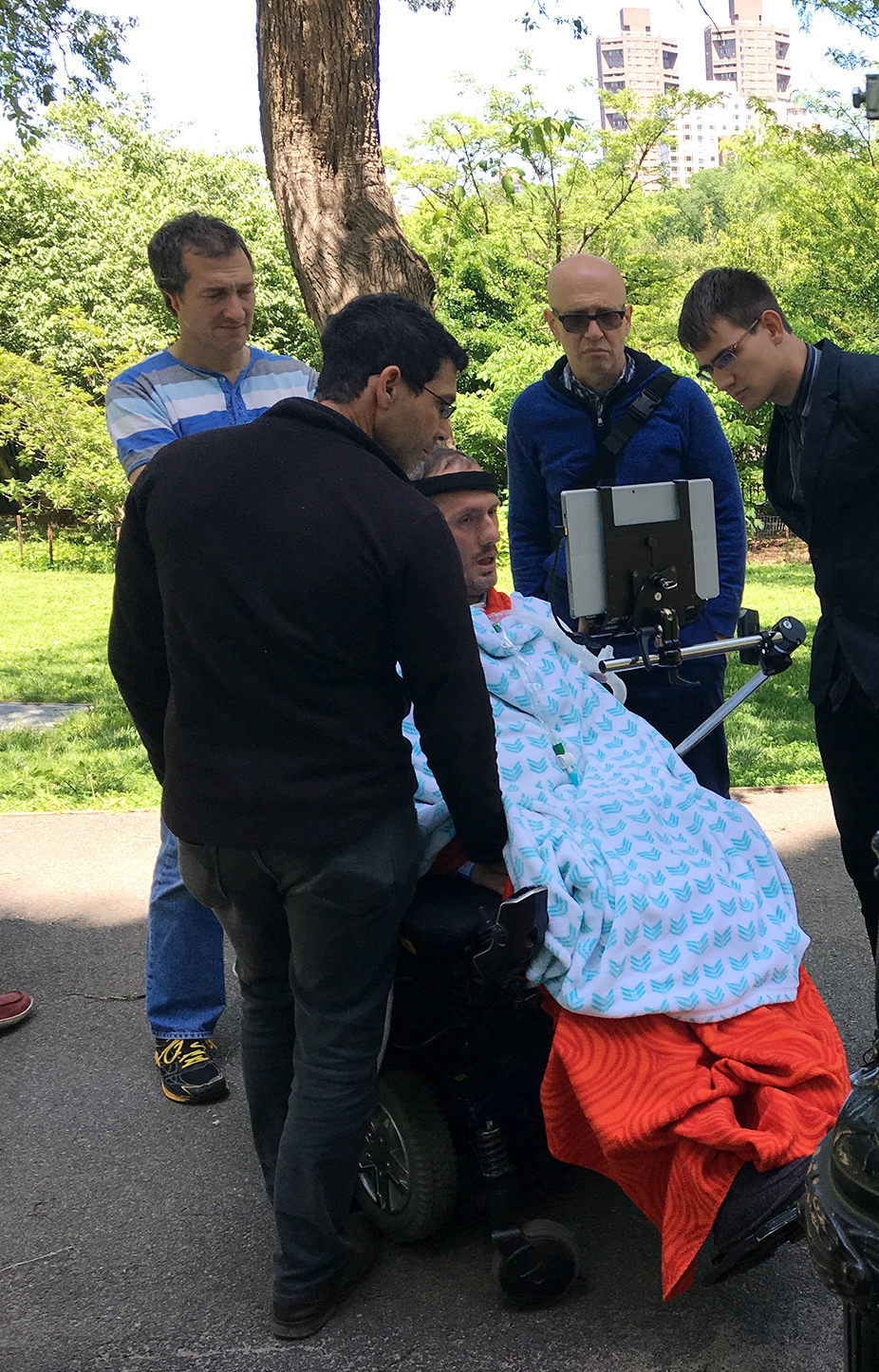 Family members surround Adox on the day that he died last May. His wish to die in a hospital so that he could donate his organs turned out to be difficult to fulfill.

Adox and his husband, Danni Michaeli, made a plan. They would go to University Hospital in Newark, where Adox often had been treated, and have his ventilator disconnected. The doctors there had reassured Adox he could ask to come off the ventilator anytime.

In May his family and friends flew in from around the country, and joined neighbors for a big celebration of Adox's life. They spent one last weekend with him, planting a tree and painting a big, colorful mural in his honor. Some wore T-shirts printed with Adox's motto, "Celebrate everything until further notice."

But their plan suddenly changed when University Hospital's attorneys intervened.

"At the 11th hour, they emailed us and said their lawyers had stopped the process because they were afraid it looked too much like assisted suicide," Adox explained. "I was crushed."

Every day, physicians withdraw life support on behalf of patients in hospitals who choose to refuse care. That's generally not considered physician-assisted suicide or euthanasia — the key being that the patient is already in the hospital.

But Adox was asking to be admitted to the hospital specifically to end his life. And despite the planning, his request made some people uncomfortable.

Dr. John Bach, a professor of physical medicine rehabilitation and neurology at Rutgers New Jersey Medical School, which is affiliated with University Hospital, was Adox's primary physician, and understood and approved of his patient's plan to end his life and share his organs.

"I could have given [him] a prescription for morphine and he could have been taken off the ventilator at home," Bach says. "But he wanted his organs to be used to save other people's lives!" 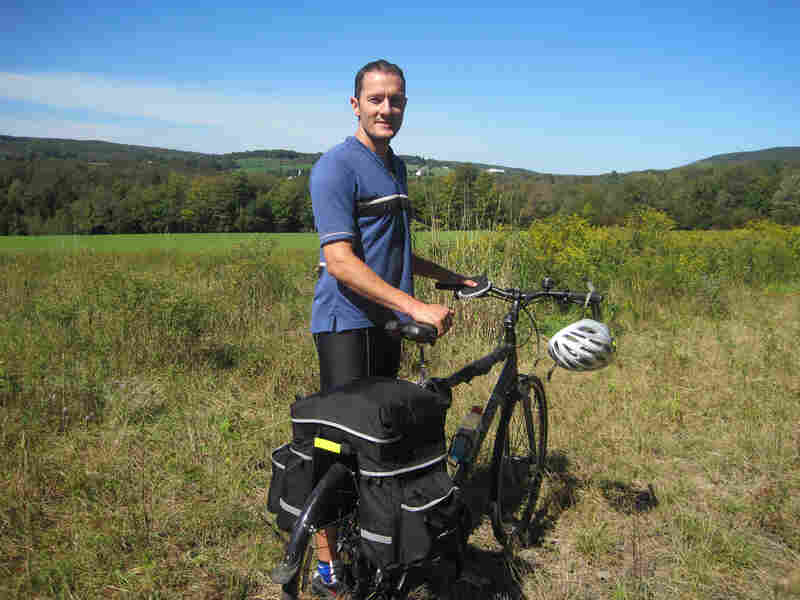 Adox before he was diagnosed with ALS. He decided to become an organ donor so that other people could enjoy a longer life. Courtesy of Evan Bachner hide caption 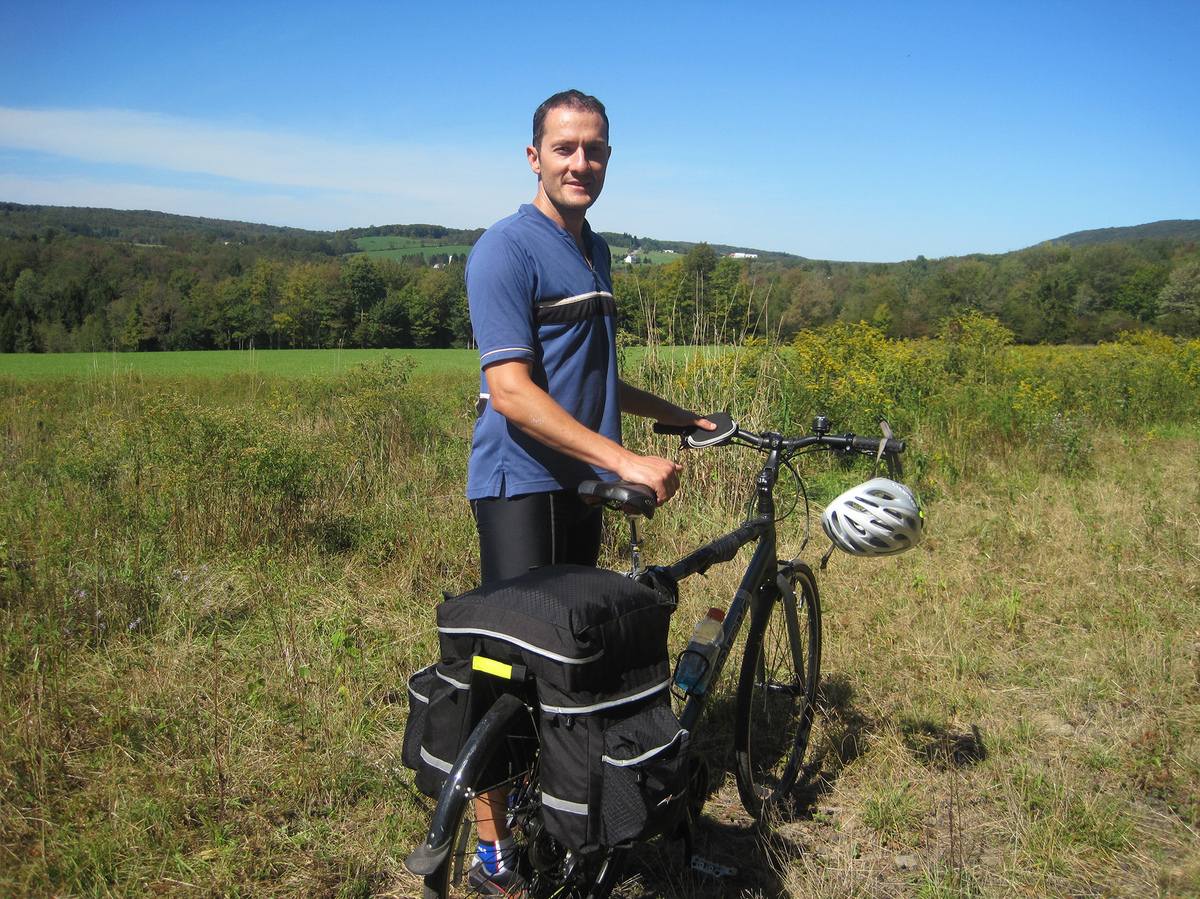 Adox before he was diagnosed with ALS. He decided to become an organ donor so that other people could enjoy a longer life.

Other physicians at the hospital supported Adox's plan, too.

"We have an ethics committee that approved it 100 percent," Bach says. "We have a palliative care committee — they all agreed, 100 percent. But it didn't make any difference to the lawyers of our hospital."

University Hospital has declined several requests for comment, but Bach says the hospital's attorneys were concerned about liability.

"The legal issue is: What is euthanasia?" Bach explains. "Are you killing a patient by taking him off a respirator that's keeping him alive?"

Adox had an advance directive that stated, "I do not want medical treatment that will keep me alive if I have an incurable and irreversible illness and the burdens of continued life with life-sustaining treatment become greater than the benefits I experience."

Having an advance directive on file is especially important for ALS patients, Bach says, because they can eventually become "locked in," unable to express their wishes.

In this particular case, the hospital wouldn't have had to rely on the directive, Bach noted: Adox was still fully capable of expressing his wishes clearly. It deeply troubled the physician that his patient's wishes could not be met.

"Myself and all the other doctors who took care of him in the hospital were almost as upset about it as he and his husband were," Bach says.

Dr. Joshua Mezrich, a transplant surgeon at the University of Wisconsin Hospital, has had patients with ALS who, like Adox, wanted to donate organs. He believes hospitals need to create protocols for these situations — even though such cases are rare.

Mezrich acknowledges this could challenge a key principle for physicians: First, do no harm. But that mandate can and should be interpreted broadly, he believes.

Still, planning one's death to allow for organ donation raises some thorny questions, says Arthur Caplan, director of the division of medical ethics at New York University and author of Replacement Parts: The Ethics of Procuring and Replacing Organs in Humans. 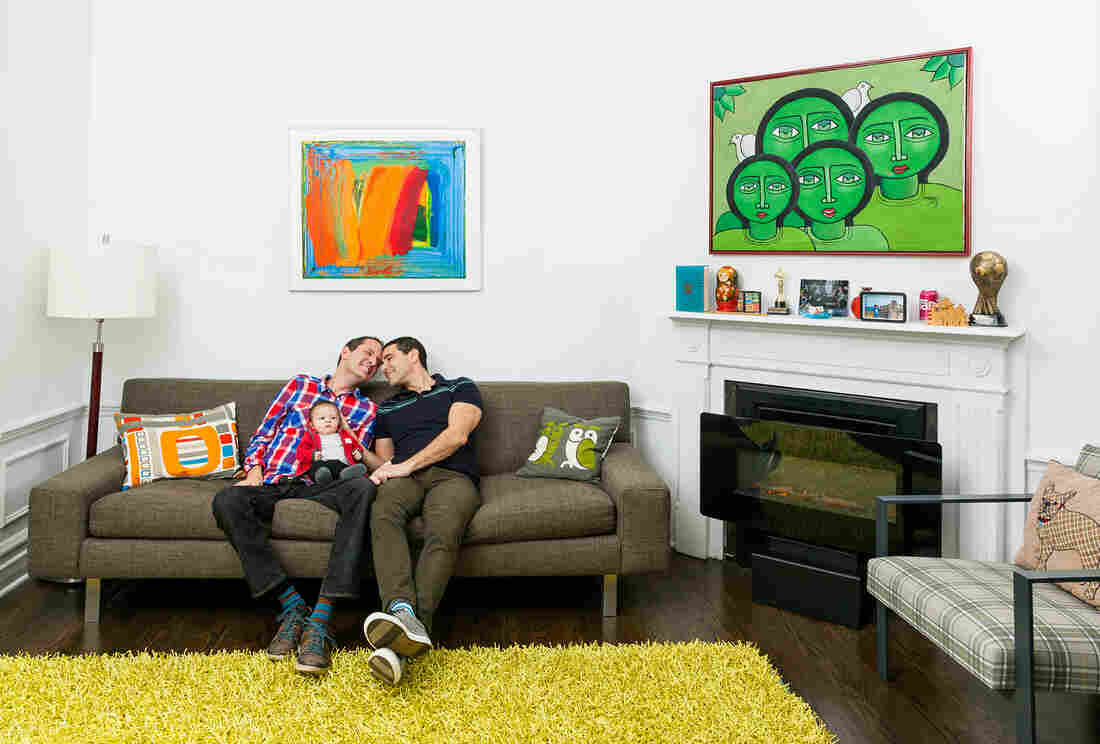 Adox and Michaeli with their son, Orion, in the winter of 2015. Courtesy of Christine Gatti hide caption 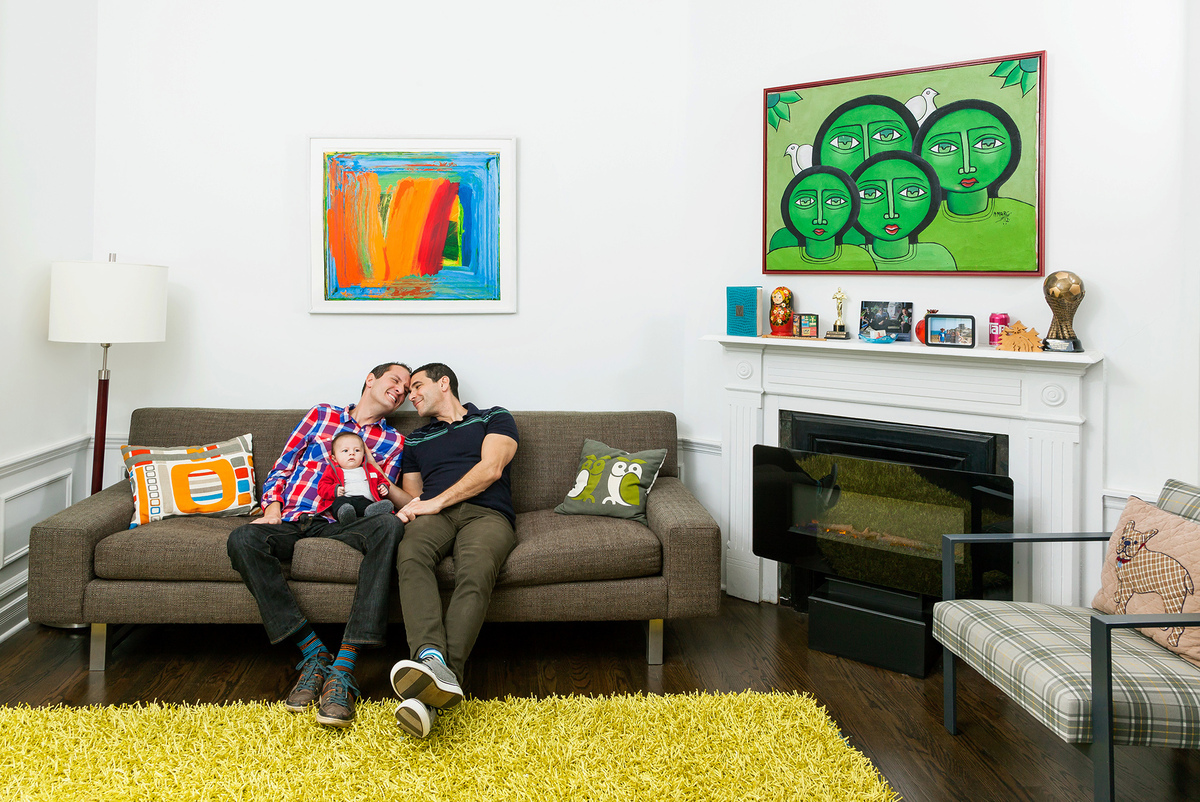 Adox and Michaeli with their son, Orion, in the winter of 2015.

Typically a separate team of physicians or an organ procurement team discusses donation with family members after a patient dies, to avoid any tones — whether real or perceived — of coercion or conflict of interest, Caplan points out.

"You'd have to change the culture of critical care and say it's OK to talk with the person about organ donation as part of their dying," he explains.

This issue may get bigger, Caplan believes, as states move to legalize physician-assisted death. Although, so far, there has been little public discussion because "it's too controversial."

"If we went in the direction of bringing more people who are dying — whether it's ALS or whatever it is — into settings where we could have them consider organ donation because they're on the machines, we'd probably have a bigger pool of organ donors," Caplan says.

But that approach would have a downside, too, he continues. People might perceive doctors as more focused on "getting organs" than caring for dying patients. 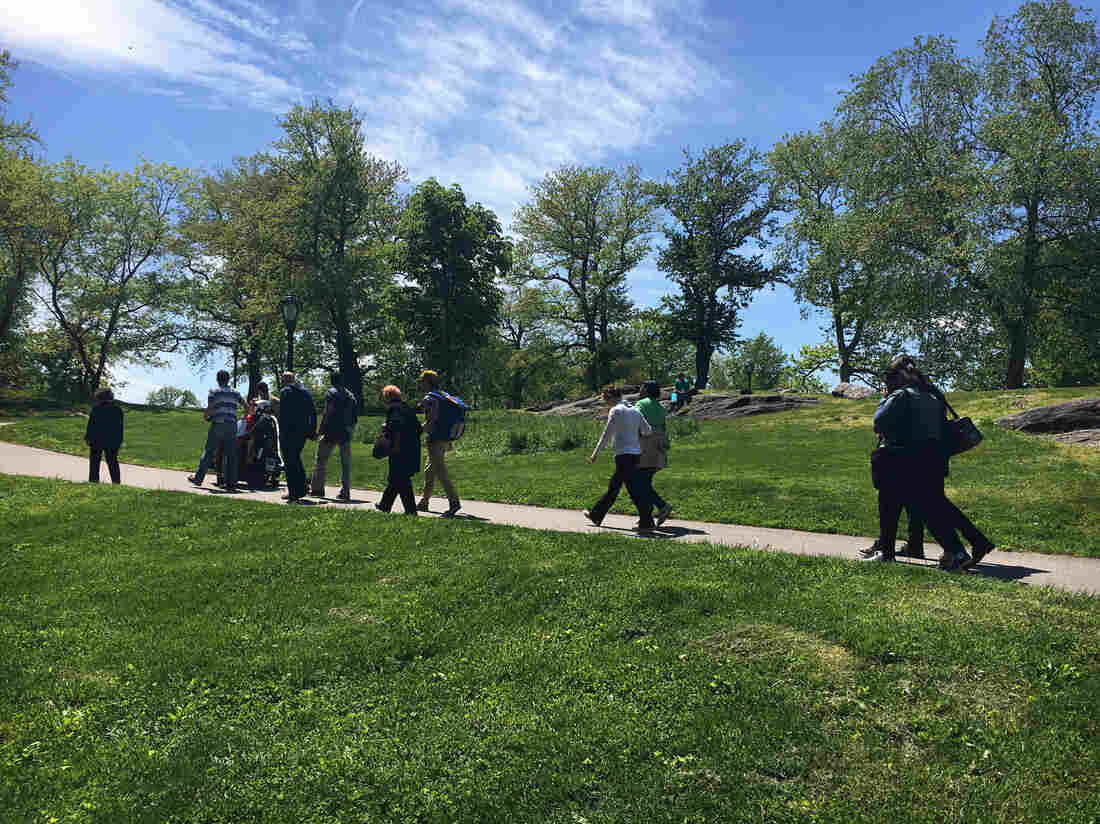 Adox takes one last walk with family and friends in New York's Central Park before going to a hospital to be disconnected from the ventilator that kept him alive. Karen Shakerdge/WXXI hide caption

There is at least one hospital that has established a policy for patients with ALS who want to be organ donors. Froedtert Hospital and its partner Medical College of Wisconsin, in Milwaukee, approved such a policy in May.

About a year ago there, a patient with ALS wanted to donate her organs, but the hospital wasn't able to honor her wish. The experience prompted physicians to develop a multistep system that includes evaluation from psychologists, an ethics review and considers technical matters such as transportation or insurance coverage.

"Obviously we're all sensitive to any perception of assisted expedition of death," says Dr. William Rilling, vice chair of clinical operations of radiology at Froedtert Hospital. "But, at the end of the day, the patient's wishes count for a lot."

After University Hospital declined to admit Adox, he and his husband reached out to six other hospitals through various intermediaries. They waited for days to hear back.

In the end, LiveOnNY, the organ procurement organization based in New York City, stepped in to help. The organization's medical director, Dr. Amy Friedman, went to visit Adox at his home to vet his suitability as a donor.

"There was a hospital partner," Friedman says, "that felt very supportive of this circumstance, understood the challenges that they would be faced with, [and was] prepared to be supportive of what Dave wanted and would be able to provide a bed."

Finally, on the palliative care floor at Mt. Sinai Hospital on May 18, Adox and Michaeli prepared to say their goodbyes.

"We sat; we listened to '80s music. I read Dave a poem," Michaeli recounts, close to tears. "And when they were really sure — and we were all really sure — that he was in a deep state of sedation they disconnected his breathing machine."

And in the end, Adox's wishes were met — he was able to donate his liver and kidneys. Michaeli says he felt "an incredible swelling of gratitude" to the hospital team who helped make that happen.

"The person we were trying to do a direct donation for was a match," Michaeli says. "And he has Dave's kidney right now."