Accessibility links
Less Competition Isn't Driving Up Obamacare Prices : Shots - Health News One in five people getting health care through the Affordable Care Act no longer have a choice of insurers. But those markets don't have significantly higher prices than areas with competition. 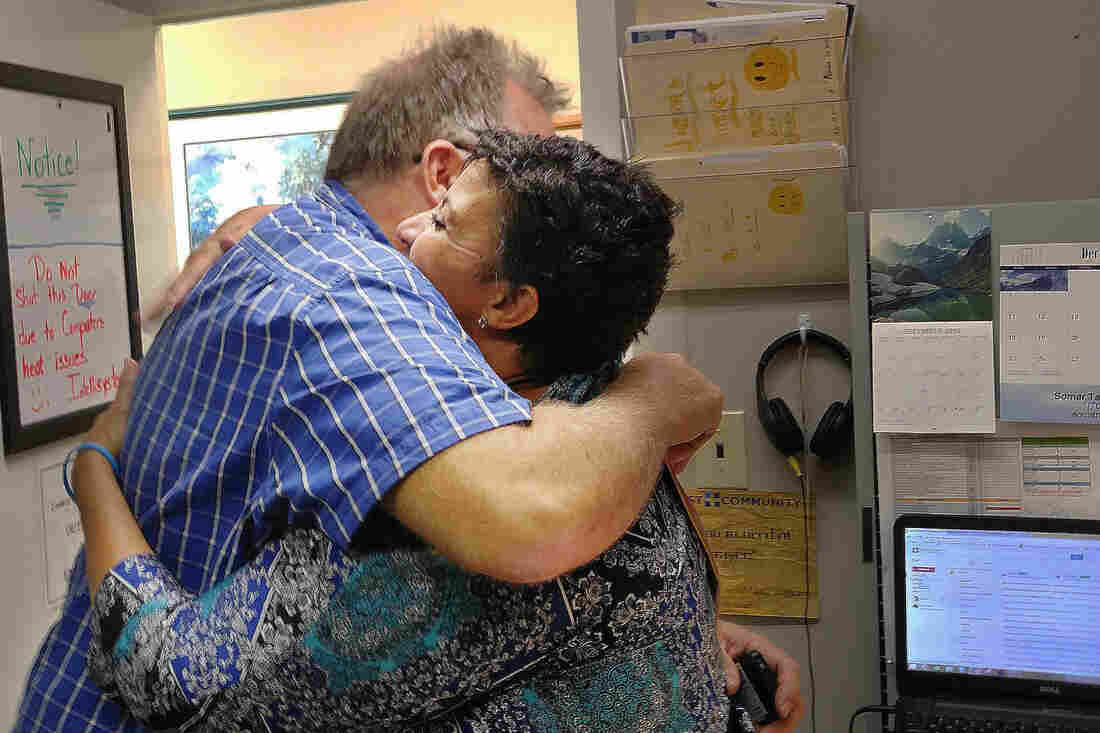 Ron Ellis of Augusta, Ga., hugs Monica Baldwin, a navigator with Christ Community Health, after she helped him sign up for insurance through the Affordable Care Act. Phil Galewitz/KHN hide caption 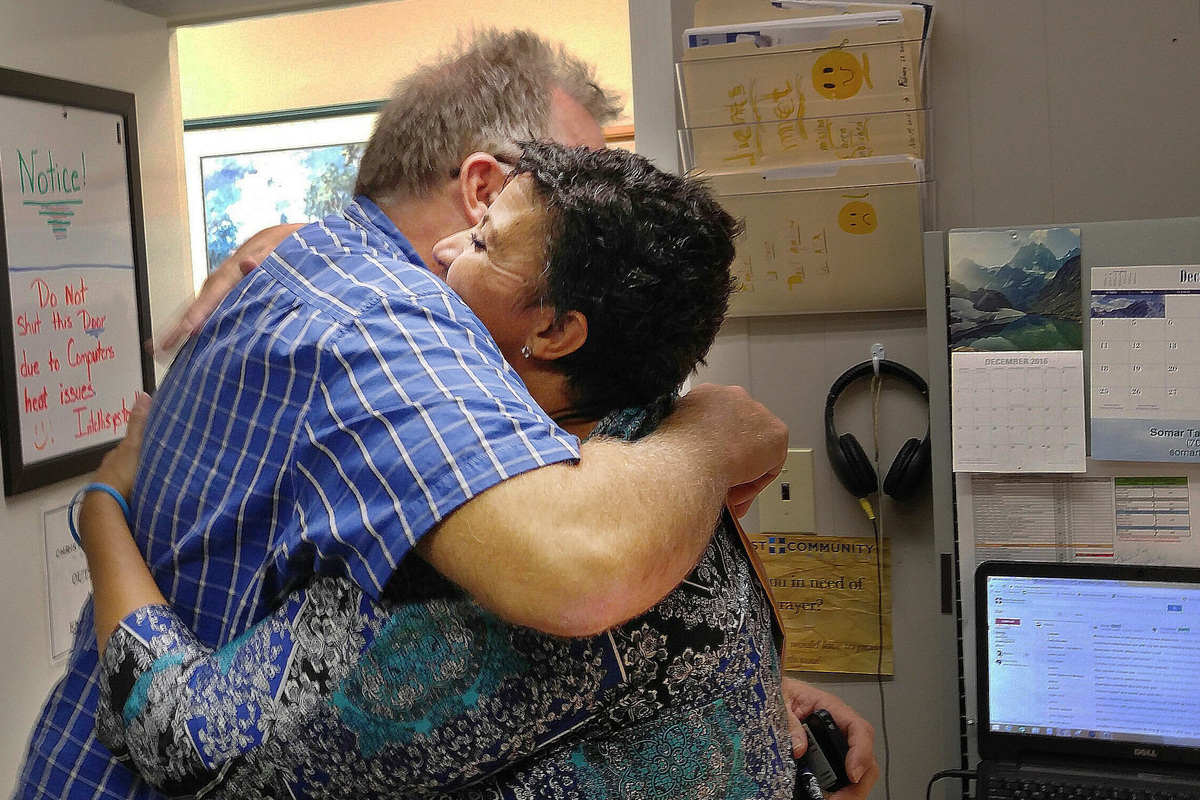 Ron Ellis of Augusta, Ga., hugs Monica Baldwin, a navigator with Christ Community Health, after she helped him sign up for insurance through the Affordable Care Act.

People in Columbia, S.C., had their pick of four health insurers last year when they shopped for policies during the Affordable Care Act's open enrollment.

This time they have just one: Blue Cross Blue Shield of South Carolina, which had the most Obamacare enrollees in Richland County in 2016 due to its low prices.

It's a change that's been repeated around the country after big health insurers such as Aetna, Humana and United Healthcare pulled out of dozens of Obamacare marketplaces that they judged unprofitable.

But there's a surprising bottom line: Although prices are going up in almost all areas, they're not significantly higher than they are for people living in areas served by multiple insurers, according to data reviewed by consulting firm Avalere Health.

"A lack of competition is bad for the insurance market in the long term, but in counties that have only one plan it hasn't proven to be catastrophic for consumers for 2017," says Caroline Pearson, a senior vice president with Avalere. "We expected to see the biggest price hikes in areas without competition."

She suggests that didn't happen because insurers had to file their initial 2017 rates to regulators earlier this year, before they knew exactly where competitors were dropping out.

"Those rates could be adjusted, but broadly the pricing was set in the absence of full competitive information," Pearson says. When open enrollment for 2018 begins next fall, "you could see big price increases in regions without competition."

Uncertainty surrounds the future of the exchanges after the Trump administration and Republican-led Congress take power. Worries about the future of Obamacare may be spurring a burst in enrollments, which were up by 400,000 to 6.4 million from Nov. 1 to Dec. 19, compared with the same period last year, the government reported.

Rates Up 22 Percent For Obamacare Plans, But Subsidies Rise, Too

Even in Richland County, where premium increases exceeded the average rate hike nationwide, individuals and the navigators who help them enroll say they have found good deals — especially for people with lower incomes that make them eligible for subsidies.

Richland was one of 74 counties that dropped from at least four insurers in 2016 to just one in 2017, according to a Kaiser Health News analysis of federal data for the 39 states that enroll people through healthcare.gov. In 66 of those counties, the Blue Cross and Blue Shield affiliated plan was the sole survivor.

Blue Cross plans generally dominated the individual insurance market before the 2010 health law was passed, and they have recaptured their place in many cities and counties, says Pearson. That helped them outlast insurers such as UnitedHealthcare and Humana, which lacked that experience when they began selling individual plans under Obamacare in 2014. Even so, Blue Cross plans have withdrawn from Nebraska and Minnesota for 2017, as well as from densely populated counties in Arizona and Tennessee.

"In some ways the individual market looks today much like it did before the ACA, from a competitive standpoint," Pearson says.

Stephanie Hickman, 29, of West Columbia, S.C., feared the worst when she began shopping for 2017 coverage on the exchange with help from a federally funded navigator at the downtown library. Hickman was uninsured most of the year, and paid $200 a month for her prescription drugs.

After sorting 20 options, the certified nursing assistant was stunned to find a subsidized plan that would cost her $22.30 a month and not more than $700 a year out-of-pocket in co-pays and deductibles. She would pay nothing to see a primary care doctor. 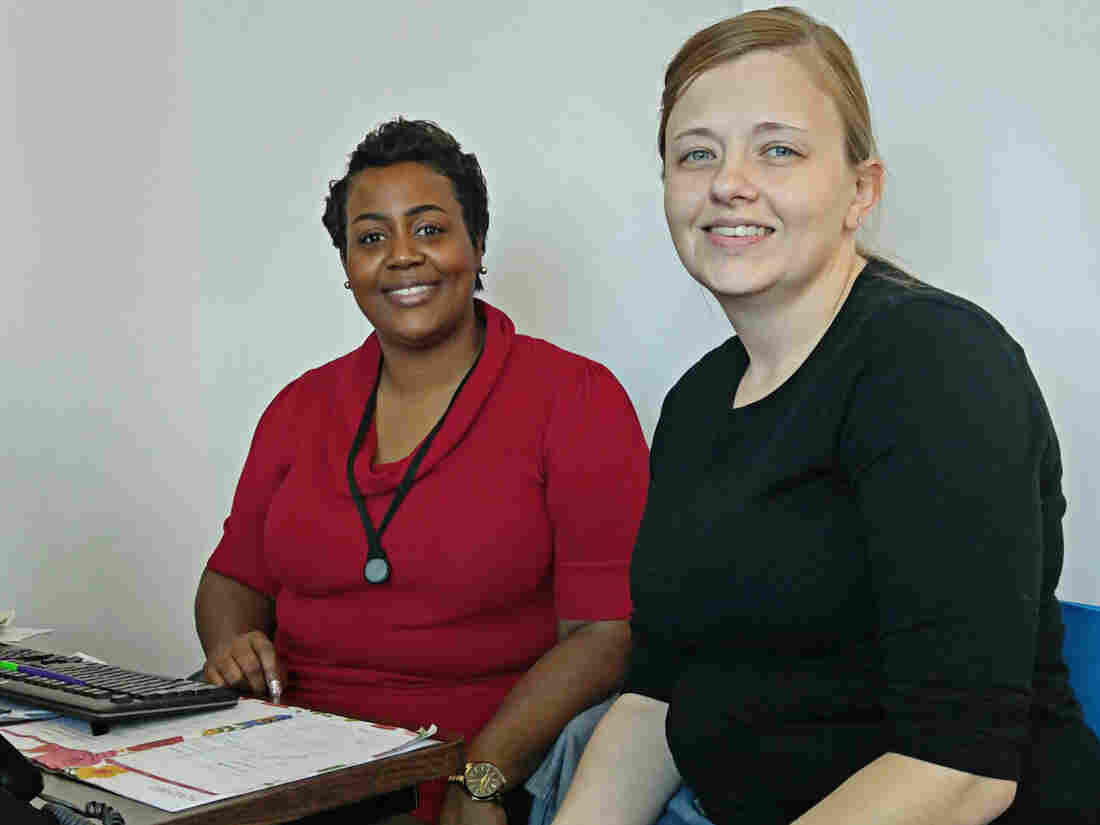 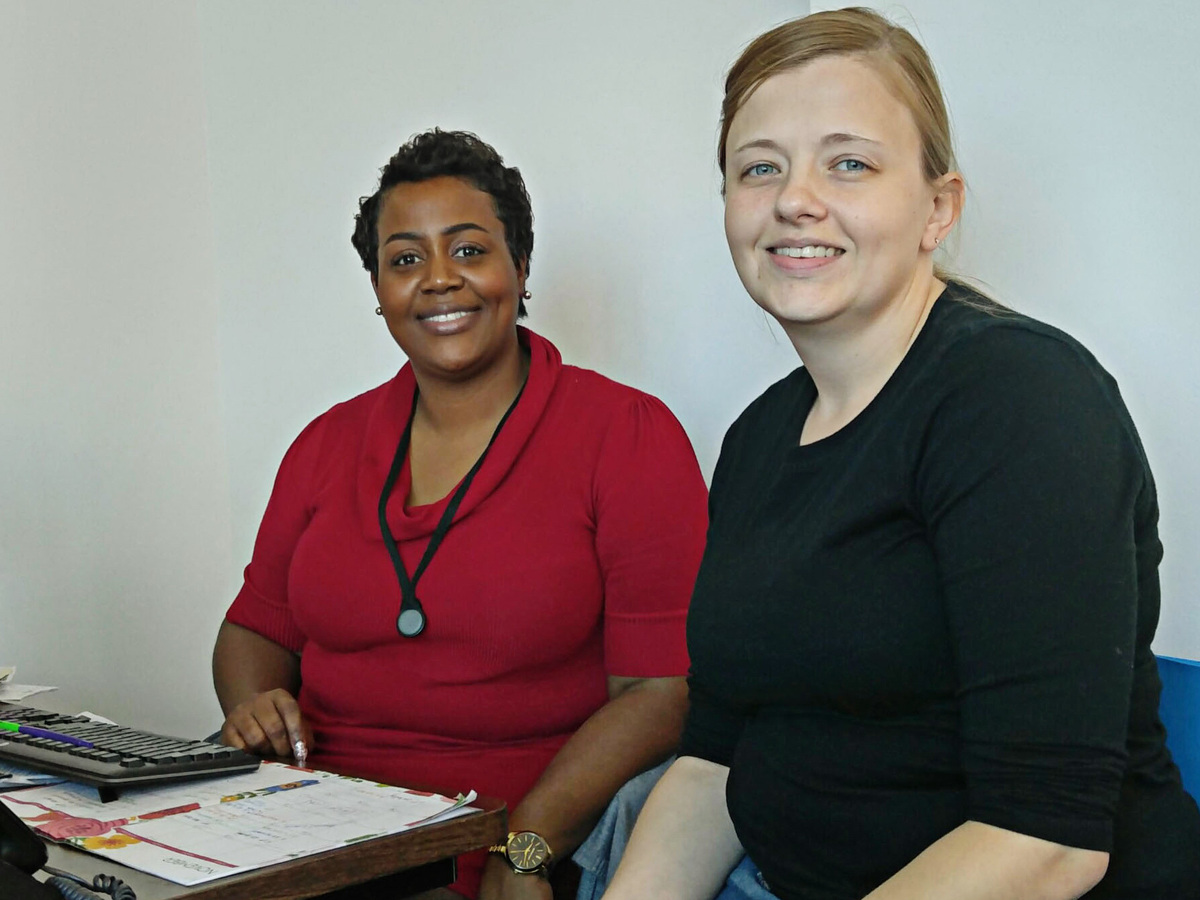 Sharita Moultrie, left, a navigator with the Palmetto Project, helps Stephanie Hickman enroll in an Obamacare plan in Columbia, S.C.

More than 80 percent of the nearly 13 million people who enrolled for coverage on the marketplace last year qualified for subsidies, which are pegged to the price of the second-lowest silver premiums. That means that as the cost of the silver plans rise, so do the subsidies.

But that doesn't help the millions of people with higher incomes who don't qualify for subsidies and are facing higher premiums. For them, the loss of insurance competition and higher rates has been a double blow, according to insurance agents. "People are getting slammed and having to pay through the nose," says Jocelyn Boland, an insurance agent in the Columbia, S.C., area who is handling about 500 Obamacare clients this year. "I have a lot of upset people."

Despite the higher prices and promises by president-elect Donald Trump and GOP leaders to repeal the health law in 2017, most are still signing up, she says.

Seventy miles south of Columbia, Augusta, Ga., is also down to just one Obamacare insurer after having four in 2016. Among those who have signed up for the remaining Blue Cross Blue Shield of Georgia plan, some are thrilled at low rates and others, not so much.

Dorothy Johnson, 57, a caterer who lives in a mobile home with her disabled husband, was disappointed that the lowest Obamacare premium would still cost her $56 a month, even with a subsidy. 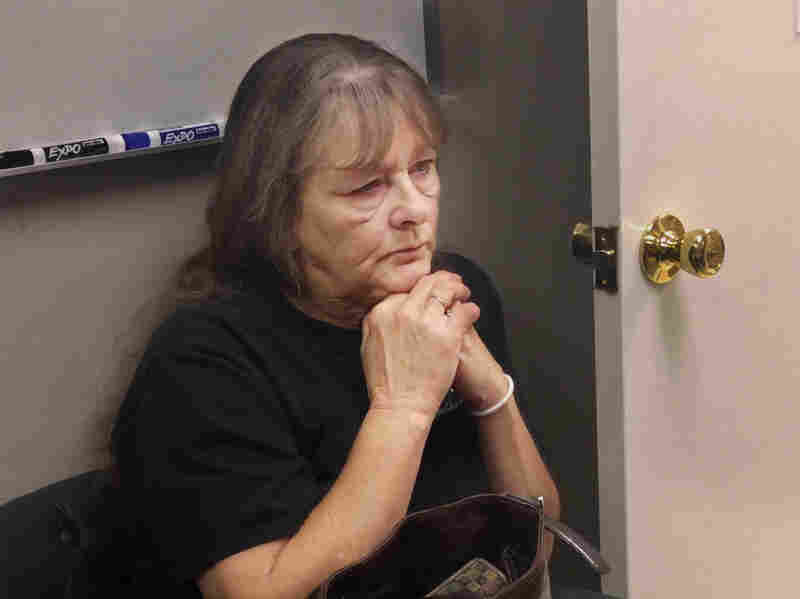 Dorothy Johnson of Augusta, Ga., worries about the high cost of health coverage, but decided to enroll in the end. Phil Galewitz/KHN hide caption 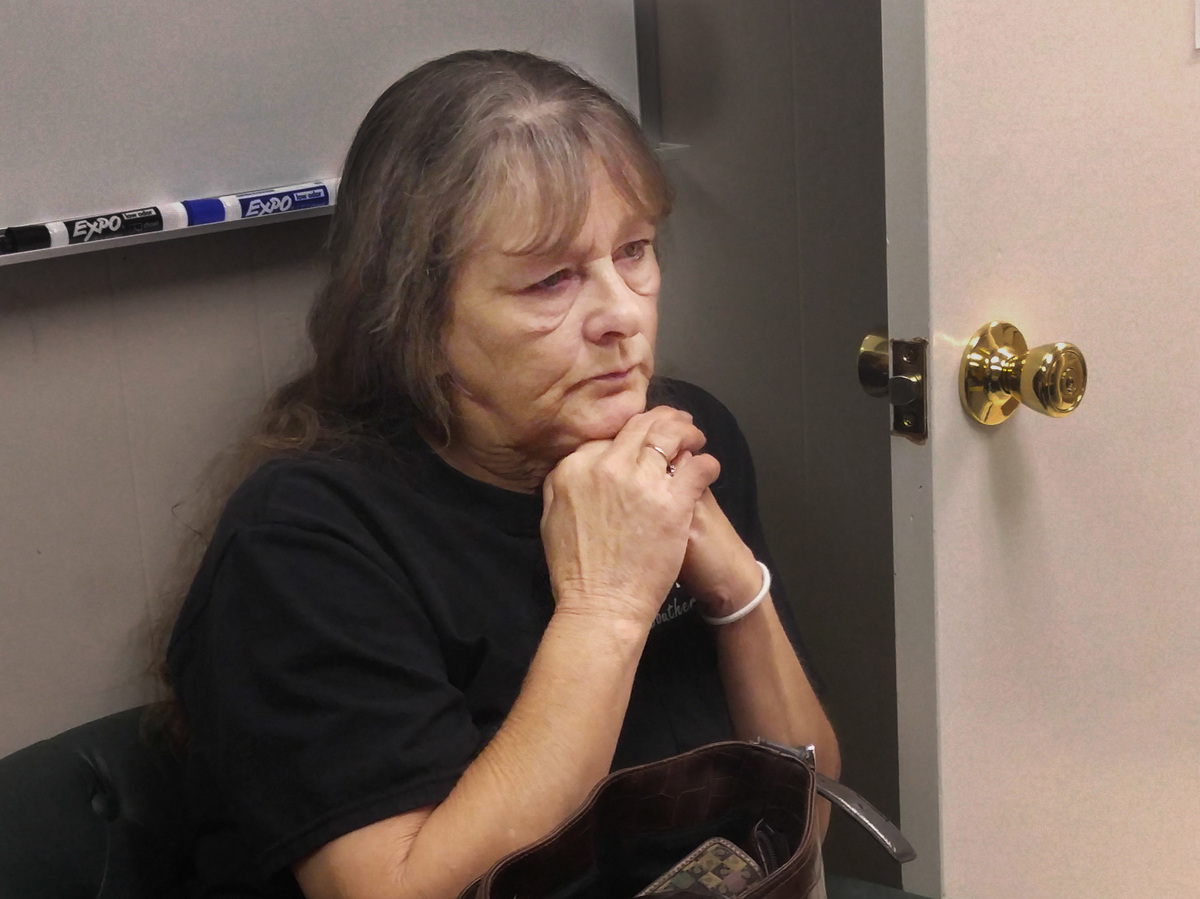 Dorothy Johnson of Augusta, Ga., worries about the high cost of health coverage, but decided to enroll in the end.

Sitting with navigator Monica Baldwin inside a converted storage room just big enough for a desk and two chairs at Christ Community Health Services, Johnson broke down in tears when told that if she did not enroll, she would owe the IRS the higher of $695 or 2 percent of her income under the health law's individual mandate. She and her husband live on $1,400 a month, mostly from his disability check and her part-time job, Johnson says. She gets around in a 1994 car and after paying the electric bill, trash, food, gas and car insurance, there is little left.

"Well, just go ahead and enroll me because there's no way I want to pay the government that penalty," Johnson told Baldwin.

She and her husband had been shopping for life insurance, but they've decided they can't afford it as well as health insurance.

The Augusta area lost Humana, Cigna and Coventry health plans for next year. Humana was the most popular plan because of its price and its inclusion of University Hospital, one of four major area hospitals which Blue Cross Blue Shield of Georgia does not cover.

But so far, Baldwin says, most people are switching to the Blue Cross plans without complaint. Joel Caceres, 27, of Augusta, said he is pleased that his monthly premium for the same subsidized Blue Cross plan that he had in 2016 will drop to $40 from $43 and his annual deductible will stay at $250. The pastry chef says subsidized coverage is vital for him because the insulin and other medications he takes will only cost him $15 a month after insurance. "Having the insurance really helps ends meet," he says after Baldwin helped him find a plan.

Ron Ellis, 55, another Obamacare customer aided by Baldwin, says he voted for Trump despite his pledge to repeal the law. "I didn't like Hillary (Clinton)," he says.

His subsidized monthly premium for his Blue Cross policy will be $65 next year, up slightly from the $63.30 he paid this year. Ellis says he went without health insurance for many years before Obamacare. With high blood pressure, arthritis in his knees and a potential need for another hip replacement, he says, "It's been great for me."