Accessibility links
Congress Returns And Gears Up To Torpedo Obamacare : Shots - Health News Republicans in Congress have vowed to repeal the health care law as soon as they get back to work. But they don't have a replacement ready, and insurers fear that could cause the market to collapse. 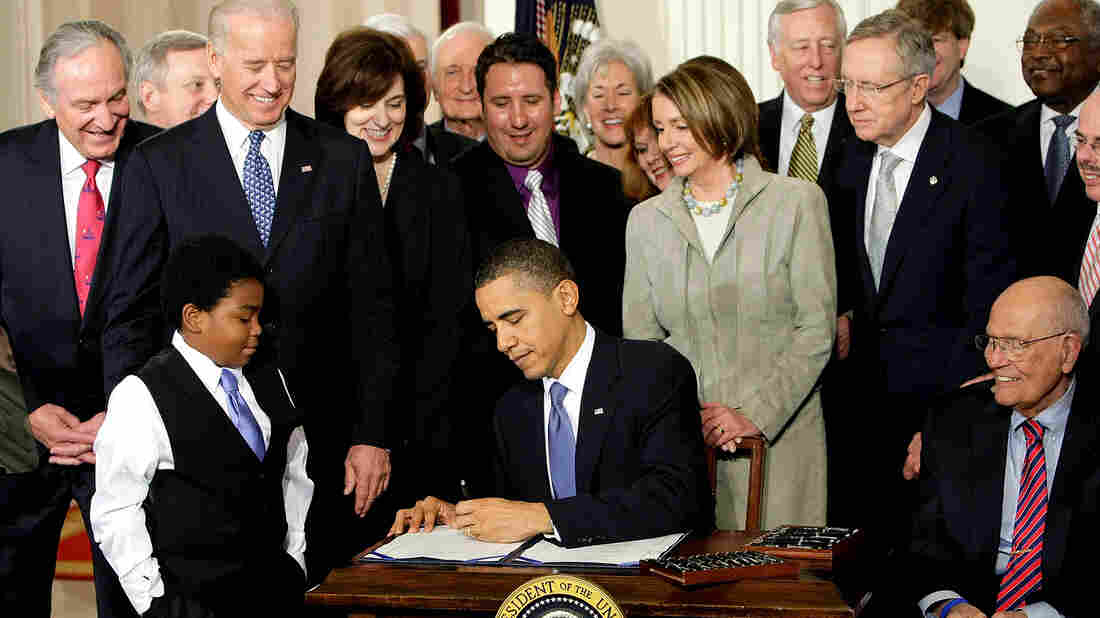 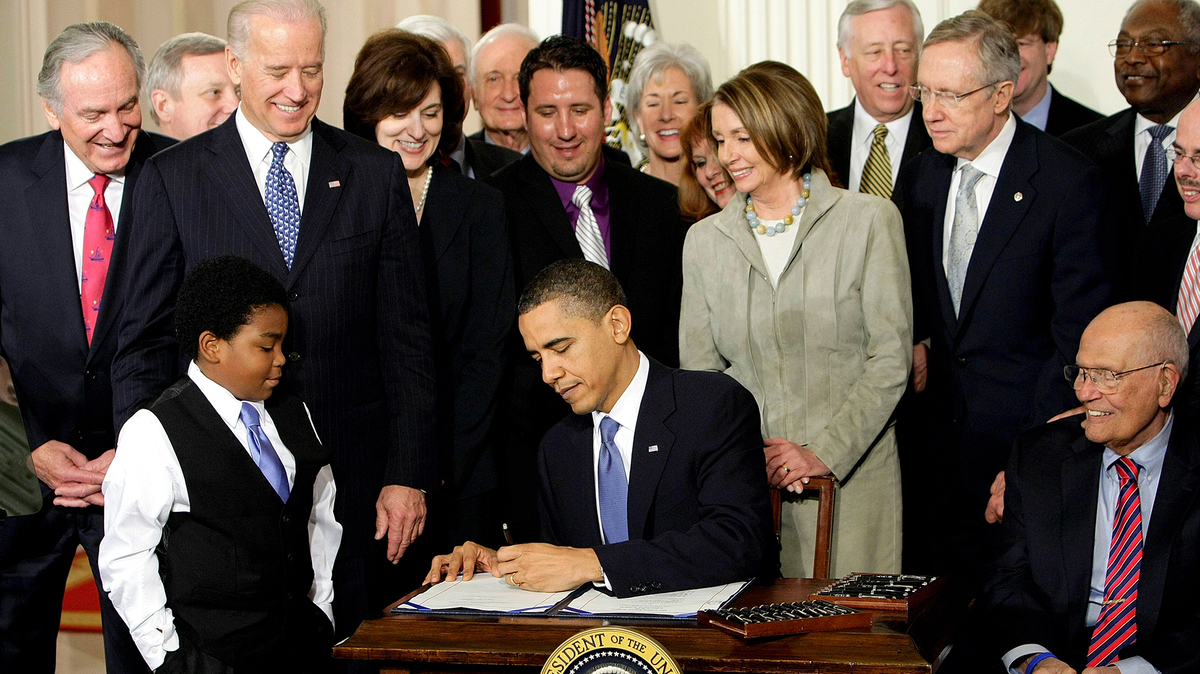 Congress is back in session on Tuesday, and leaders of both houses say their first order of business will be to repeal Obamacare.

If they do that, it will be a slap in the face to President Obama just three weeks before he leaves the White House. The Affordable Care is the outgoing president's signature achievement, marked by an elaborate signing ceremony in March 2010 at the White House, with lofty speeches from the vice president and Obama himself.

"Today, after almost a century of trying, today after over a year of debate, today, after all the votes have been tallied, health insurance reform becomes law in the United States of America," Obama said that day, to long applause from the assembled crowd.

And Joe Biden famously leaned over to remind the president that it was "a big f****** deal."

But Republicans have been vowing to repeal the law since the day it passed, and they'll soon have a sympathetic president in the White House to sign whatever bill they send him.

"We will repeal the disaster known as Obamacare and create new health care, all sorts of reforms that work for you and your family," President-elect Donald Trump vowed last month in Orlando.

Obamacare's Demise Could Be Quicker Than Republicans Intend

That new health care plan hasn't been fleshed out yet by Trump or his allies in Congress. So they say they'll vote to get rid of Obamacare, but delay its demise until they come up with a replacement that will cover the millions of people who have insurance thanks to the law.

"I don't see how you talk to any [insurance] carrier and give them any desire to hang around to see what they replace it with," says Dr. Kavita Patel, an internist at Johns Hopkins University Hospital and senior fellow at the Brookings Institution. "Why would you stick around for that?"

Patel worked in the White House and helped create the Affordable Care Act. But she's not alone in her concern.

Last month the health insurance trade group America's Health Insurance Plans sent a letter to lawmakers asking them to keep in place many of the financial incentives that are central to the law — including subsidies for patients to help them buy insurance and cover copayments, and a provision that eliminates some taxes on insurers.

The American Academy of Actuaries also warned in its own letter that a repeal of the ACA without replacing it would be dangerous to the long-term health of the insurance market.

Still, Republicans appear determined to move ahead with the vote as soon as this week.

Democrats rammed the Affordable Care Act through Congress in 2010 with no Republican support.

It was a huge, complicated law and, like most legislation, it was flawed. Over the subsequent six years, Republicans, who were angry at the way the Affordable Care Act was passed, refused to cooperate in any actions that would be seen as helping it succeed. Instead, they promised in speeches and television interviews to repeal it entirely. In fact, the House has voted more than 60 times over the years to do just that. 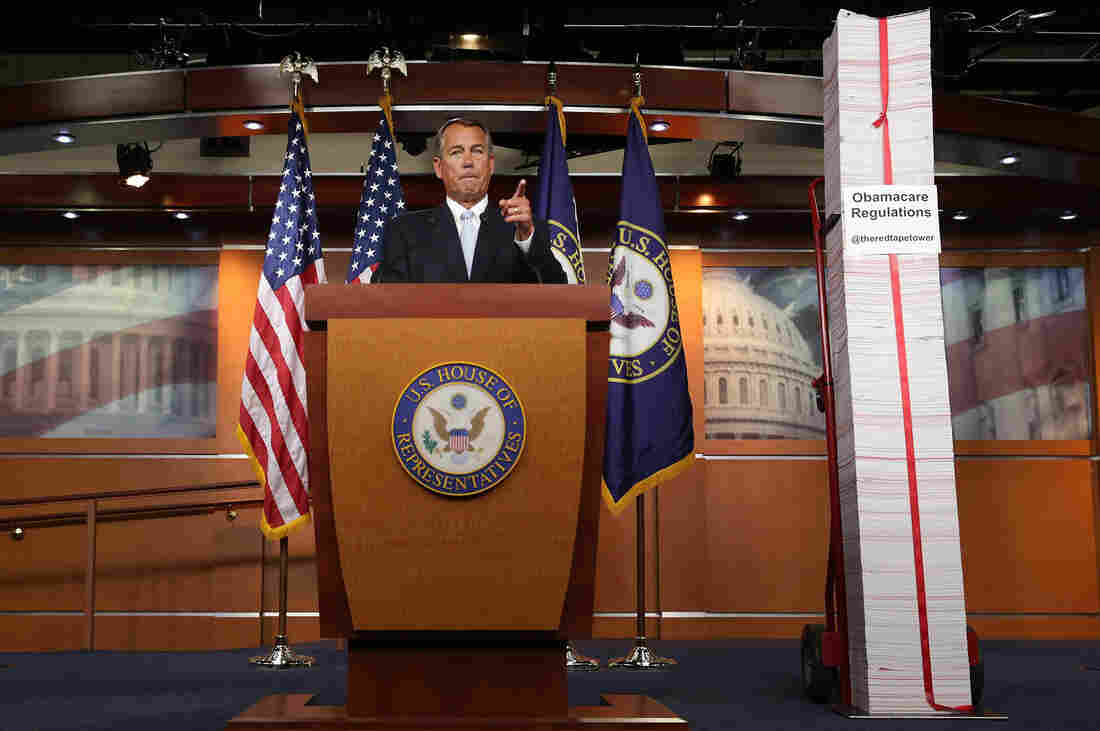 Then-Speaker of the House John Boehner stands next to a printed version of the Affordable Care Act during a Capitol Hill news conference on May 16, 2013. Chip Somodevilla/Getty Images hide caption 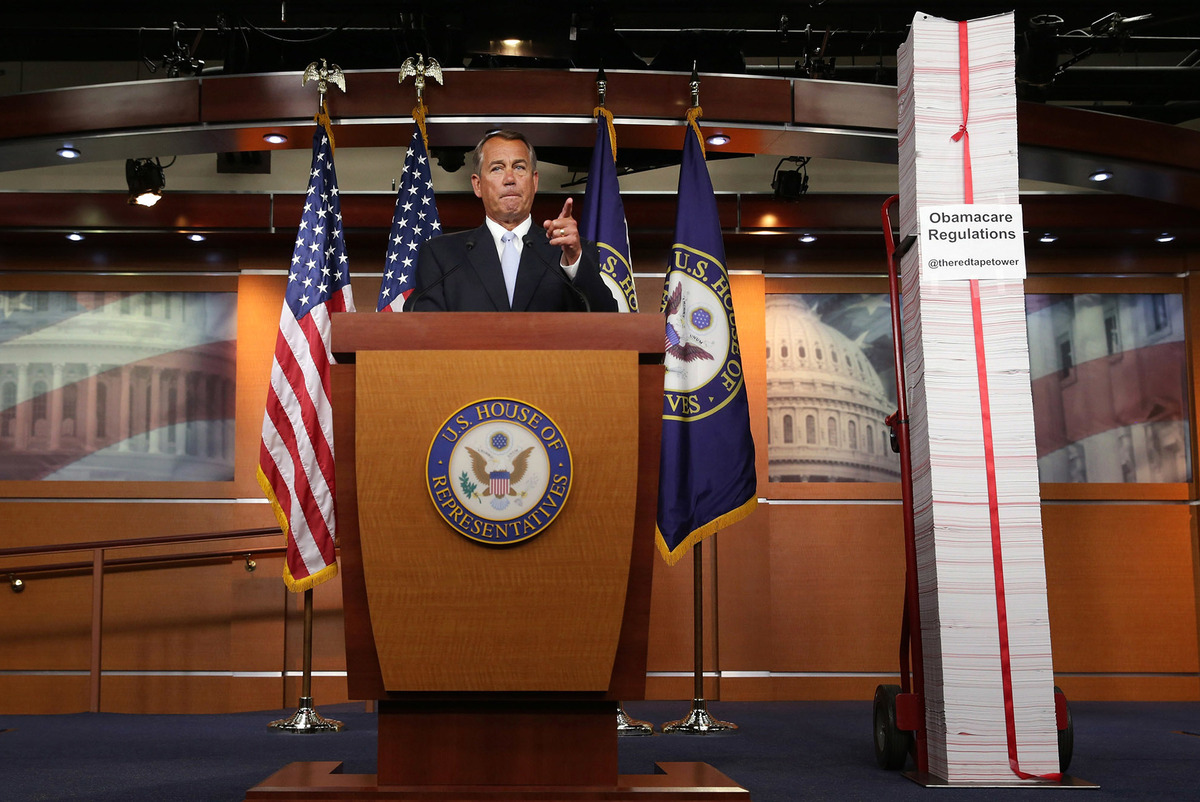 Then-Speaker of the House John Boehner stands next to a printed version of the Affordable Care Act during a Capitol Hill news conference on May 16, 2013.

"There's no getting around the fact that lots of Republicans campaigned hard against the ACA and a lot of them won, including the person at the top of the ticket," says James Capretta, a scholar at the conservative American Enterprise Institute.

But even with control of both chambers of Congress and with Trump in the White House, Republicans can't simply repeal Obamacare. They would need the help of at least a handful of Democrats to overcome a filibuster.

Democrats can't, however, filibuster budget bills. So Republican leaders have decided to defund Obamacare, eliminating the tax penalties for those who don't buy insurance and the subsidies to help people pay their premiums. Essentially, that guts the law's main elements.

The problem for Republicans is that today, an estimated 20 million people get their insurance through Obamacare. About 10 million buy policies through the exchanges set up by state and federal governments, and most of those patients get subsidies to help pay the premiums.

And millions more are covered because the law allows states to expand the number of people who are eligible for Medicaid, the health insurance program for the poor.

If Republicans Repeal Health Law, Paying For A Replacement Could Be Tough

So people who had pre-existing conditions that shut them out of the insurance market before the ACA passed, or people who had reached insurer-imposed lifetime benefit limits, generally like the law.

But, then there are people like Will Denecke, who is mad because his insurance costs have gone up since Obamacare passed. Before the law was enacted, he spent about $340 a month on health insurance.

"Incredibly, we got a notice from my health care company, Moda, which has been having financial problems, that my premium was going up to $930," he said last October.

He's a self-employed urban planning consultant in Portland, Ore., and, unlike most people in Obamacare, he makes too much money to qualify for government subsidies.

"I've had health insurance my whole life, but it's just offensive in principle to think of spending $1,000 a month on health care insurance when there is a good chance I won't need it," he said.

He was considering just letting his coverage lapse.

And, on the other side, you've got people like Leigh Kvetko of Dallas. She takes 10 medications every day because she's had two organ transplant procedures, and the drugs are part of her daily regimen to survive. After Obamacare passed, she was able quit her job at a big company and start a business with her husband, because she could finally get individual insurance.

"This particular plan, the fact that they cannot discriminate against me because of how I was born, was a lifesaver, literally," she says.

House Ways and Means Committee Chairman Kevin Brady told the Washington Times last month that consumers needn't worry. "We can assure the American public that the plan they're in right now, the Obamacare plans, will not end on Jan. 20, that we're going to be prepared and ready with new options tailored for them," he said.