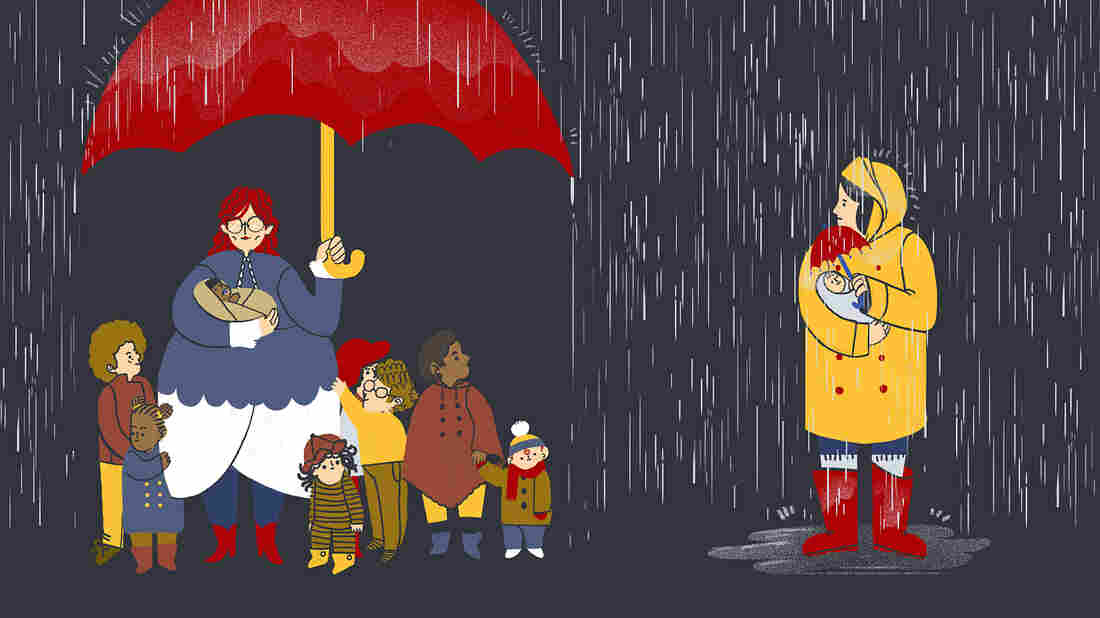 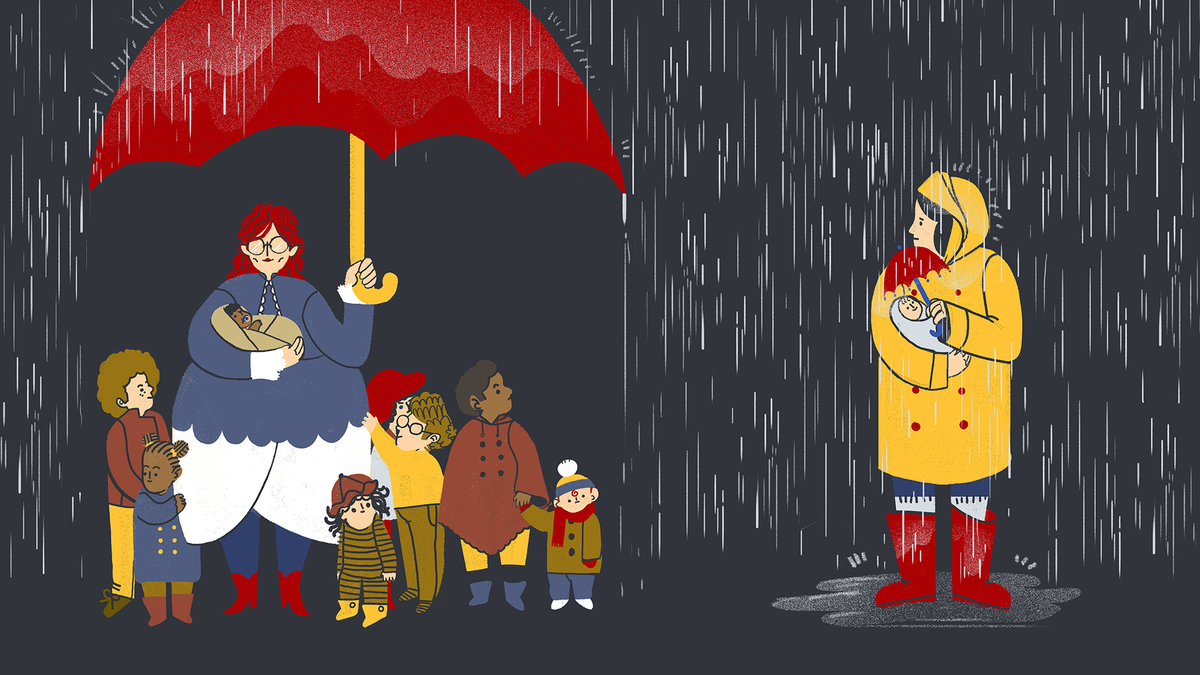 One of the most stressful questions a new parent confronts is, "Who's going to take care of my baby when I go back to work?"

Figuring out the answer to that question is often not easy. When NPR, along with the Robert Wood Johnson Foundation and the Harvard T.H. Chan School of Public Health, surveyed more than 1,000 parents nationwide about their child care experiences, a third reported difficulty finding care.

Megan Carpenter, a new mother who lives in Alexandria, Va., knows well the feeling of desperation that can come with the search for safe, quality infant care.

She had a hard deadline — 16 weeks after her baby was born her maternity leave would end and she would have to return to her job at a nonprofit that serves homeless and low-income women. So she and her husband started looking for child care early, only a few months into her pregnancy.

"At our first few interviews we were asking a lot of questions and were really trying to get a feel for the place," Carpenter recalls. "And by place 10 or 11, our only question was, 'Do you have a spot?' "

The answer to that question, time and again, was "no." That meant getting on a lot of waitlists — and paying a hefty, nonrefundable waitlist fee each time.

"There were a lot of places that were totally willing to take our $100 or $200 waitlist fee," Carpenter says. "We spent over $1,000 in waitlist fees — many of which I never heard from again."

By the time baby Cora arrived, the couple still had no prospects.

Ultimately, Carpenter and her husband persuaded their mothers to take time away from their jobs and fly out from Georgia and Missouri to watch Cora in shifts until a spot at one of the centers opened up.

Scenarios like this are playing out all around the U.S. An analysis of some 7,000 ZIP codes by the Center for American Progress describes roughly half as "childcare deserts."

While Megan Carpenter's experience is representative of what many working parents go through, Narinder Walia's is a worst-case scenario.

Walia lives in Fremont, Calif., and works in biotech. Her baby boy, Avin, was born on Halloween 2014.

During Walia's four-month maternity leave, trying to find child care nearly became a full-time job. "I made 70-some calls," she says. "Some were not accepting infants. Or they were full."

Of the roughly six dozen centers, only three were able to offer her a slot. Of those, she says, two were messy and disorganized. The third option, an in-home facility, set off some red flags. But it was the best available. Walia says her main reservation was that the center catered to toddlers and older children. Still, the owner assured her, it could handle a baby.

What ultimately happened on Avin's first day at this facility is every parent's worst nightmare.

"I was on the way to go pick him up," recalls Walia, "and the Kaiser ER called me." You have to come over, they told her. Your son is here.

To settle Avin for his first nap on her watch, the paid caregiver had put the baby belly-down in his bassinet — a move that goes against established infant-care guidelines set by the American Academy of Pediatrics and is against standard practice in the infant care field. Research has established that placing babies belly-down to sleep puts them at higher risk of sudden infant death syndrome.

The caregiver told Fremont police that she turned Avin onto his back after about 15 minutes, and that he stopped breathing a short time later.

On his first day away from his mother, Avin died — he was 3 months old. The coroner's report confirms SIDS as the cause of death.

"I couldn't wrap my head around it," says Walia, straining to recount the day. "He was smiling. He was a big baby, all chubby. There was nothing wrong with him. Even at the first and second checkup the doctor was like, 'Mama, keep doing what you're doing. The baby's doing really well.' "

What happened to Walia's family is rare. But it's the deepest fear of parents who face severely limited child care choices.

These experiences — from disruptive frustration to tragedy — leave many parents wondering why the supply of quality, licensed infant care in the U.S. does not meet the demand for it.

The answer boils down to the fact that child care, particularly infant care, is an extremely low profit field. Costs are high, factoring in real estate, supplies, insurance and, above all, labor. Many states require a ratio of one caregiver to every three or four babies.

And, on the other side of the equation, centers can't significantly raise their prices. According to a recent report by the nonpartisan think tank New America, parents in the United States pay, on average, $9,589 a year for full-time care of children from birth to age 4 — that's more than the average cost of in-state college tuition ($9,410). Many parents can't afford to pay more. So, low profits — combined with high liability and the need to navigate complex regulations — make for an uninviting business climate. And, in this climate, the waitlist has become a tool necessary for providers' financial survival, to buffer against unfilled spots and lost income.

A select few providers are thriving, though. Over the past 30 years, the company Bright Horizons has grown to operate more than 1,000 child care centers in 42 states and the District of Columbia.

So, what's the company's secret?

"We've convinced employers to invest over a billion dollars, in either capital investments or subsidies, for their working families," says Bright Horizons CEO Dave Lissy. "That just didn't exist before we pioneered the model."

Some employers, including Home Depot, Starbucks and Chevron, have partnered with Bright Horizons to establish child care centers primarily for their workers. These employers pay most, or even all, of the cost to build the facilities.

"After that's all done," Lissy says, "on average, tuitions are funded 75 percent by parents and 25 percent through employer subsidies." That means parents pay their college tuition-like sum, and the employers that partner with Bright Horizons pay even more on top of that.

Bright Horizons is able to build these bright, cheerful centers because of this generous underwriting by employer partners. Without that cushion, the rest of the child care sector is largely operating on razor-thin profit margins, slow to grow and fragile.

That industrywide weakness was a central finding of New America's study of child care nationwide.

"The thing to remember about child care is that the market really doesn't work," says Brigid Schulte, an author of the study. "It's like education. When you look at the education market, it also doesn't work. It has to be subsidized. It has to be seen as a public good, and the same sort of economic logic works in the [age] 0-to-5 early care and learning situation as well. We just haven't thought about it like that."

The idea of child care as a public good has increasing resonance with policy thinkers from the left and right.

"There definitely is an issue of child care supply," says Angela Rachidi, research fellow at the conservative American Enterprise Institute. "It's an issue up and down the income scale."

Of all the ways the government could spend public money, investing in child care, she says, should be a priority. "Not only does that then benefit children," Rachidi says, "but it also helps the parents work."

Katie Hamm, senior director of early childhood policy at the left-leaning Center for American Progress, agrees. Without much greater public support of the child care industry, she says, demand for licensed infant care will continue to outpace supply. But she takes heart from a campaign season where heavy emphasis was placed on the challenges American workers face when it comes to child care and the need for infrastructure investment. She sees the two issues as interconnected.

"It seems like there might be some consensus, both with the incoming administration and among members of Congress, that we need an infrastructure investment," says Hamm. "A lot of people talk about that and mean roads and bridges. But before parents get on roads and bridges and support our economy, they need child care."

For Walia, the mother from Fremont, Calif., more good quality infant care can't come soon enough. She is expecting another child any day.

"I'm kind of being very hesitant even just thinking about the child care service right now," she says. "In my mind I just want to hold him tight and not let him go. But obviously that's not practical."