Accessibility links
Mammograms Find Many Tumors That May Not Need Treatment : Shots - Health News Research from Denmark suggests about one-third of lumps detected by routine mammograms would never have become dangerous. That puts women at risk of needless surgery, radiation or chemotherapy. 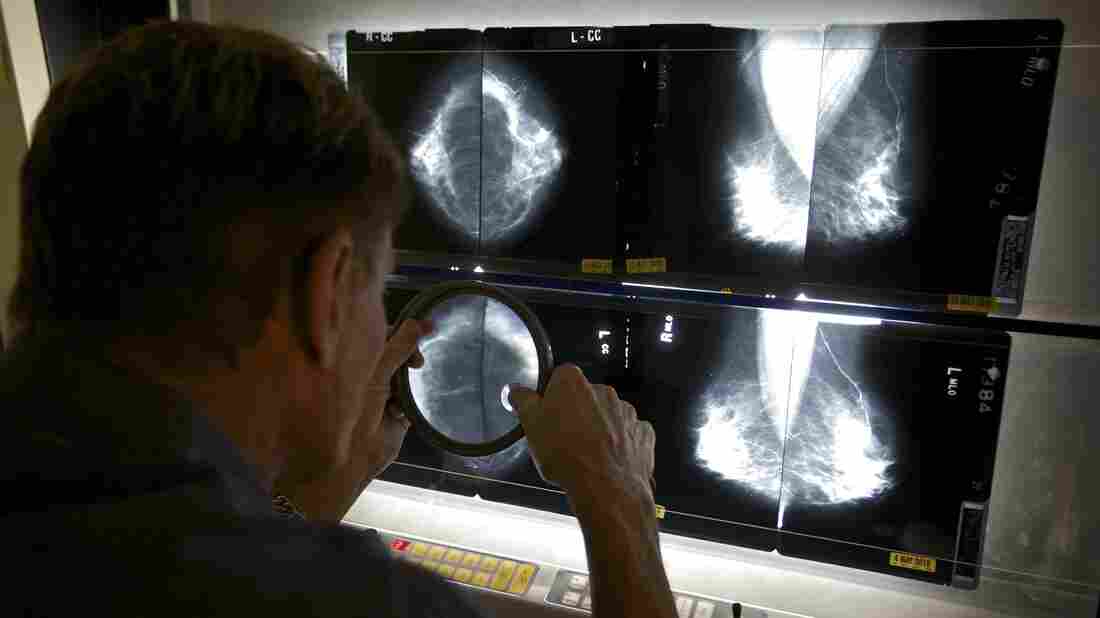 Mammograms are good at finding lumps, but it can be hard to determine which could become life-threatening and which are harmless. Damian Dovarganes/AP hide caption

For years, women have been told that regular mammograms can help reduce their risk of dying from breast cancer by catching tumors at their earliest, most treatable stages.

But a Danish study is the latest research to challenge that assumption. Researchers followed thousands of women in Denmark over more than a decade and found that perhaps one-third of the abnormalities detected by mammograms may never cause health problems.

"Breast screening can have some very substantial harms," says Karsten Jorgensen, deputy director of the Nordic Cochrane Centre in Denmark, who led the study. "And the most important one of those is the overdiagnosis of breast cancers that would never have developed into something life-threatening."

The study adds to growing evidence that breast cancer screening can lead to unneeded treatment.

"There's a tendency in the United States to think that screening is better than it actually is," says Otis Brawley, chief medical officer at the American Cancer Society. Brawley wrote an editorial accompanying the study.

"It's important that we learn the limitations of screening so that we can apply that tool as best we possibly can to save as many lives as possible," Brawley says.

The problem, Brawley says, is that doctors can't yet tell which tumors really need to be treated and which they might be able to just monitor. For now, he says, it's important all women continue to follow mammography guidelines and get treated if they are diagnosed.

"One of my nightmares is people will read this paper," Brawley says, and "elect to not get treated."

But others argue the paper should encourage women to think twice about whether they need a mammogram.

"Women should understand all of these issues and make their own decision if they want to have a mammogram," says Fran Visco of the National Breast Cancer Coalition, an advocacy group. "They should really think very carefully before getting a mammogram."

And other researchers dismissed the findings, saying the new study is flawed and that there is clear evidence mammograms save lives.

"It's giving women the wrong idea that half of all cancers maybe are nothing to worry about," says Debra Monticciolo, who is chairwoman of the American College of Radiology's Breast Imaging Commission. "Nothing could be further from the truth."

The study, published in Annals of Internal Medicine, took advantage of an unusual situation. Denmark made screening mammography available to all women at different times in different parts of the country. That enabled the researchers to compare the incidence of early- and late-stage breast cancer in different regions, comparing those who got mammograms and those who didn't.

"We wanted to look at whether breast screening led to fewer advanced-stage cancers because screening is really based on the premise that you detect cancer earlier so you should have less advanced cancers over time," Jorgensen says.

But the analysis found that there was no "reduction in the frequency of late-stage tumors in the screened areas compared to the non-screened areas," Jorgensen says. "But we did see a huge increase in the occurrence of early-stage cancers."

Do You Need Extra Screening For Breast Cancer? The Picture Is Blurry

The findings suggest mammograms are frequently picking up lumps that would never become a health problem. Like many prostate cancers, they may never grow or may even regress on their own.

"That means that these essentially healthy women get a breast cancer diagnosis that they otherwise would never have gotten," says Jorgensen. "It's really a life-changing event to get a cancer diagnosis."

In addition to causing stress and anxiety, a breast cancer diagnosis also usually leads to treatment, which can include surgery, radiation and chemotherapy, which are difficult and can have serious side effects.