Accessibility links
Trump Promises On Health Insurance Appealed To Family Struggling With Cost : Shots - Health News Two Pennsylvania voters who buy health insurance on HealthCare.gov are frustrated with how expensive the plans have become. They voted for Trump in hopes he can bring down health insurance costs.

Listen · 3:53 3:53
Insurance Customers In Pennsylvania Look To Trump To Ease Their Burden 3:53 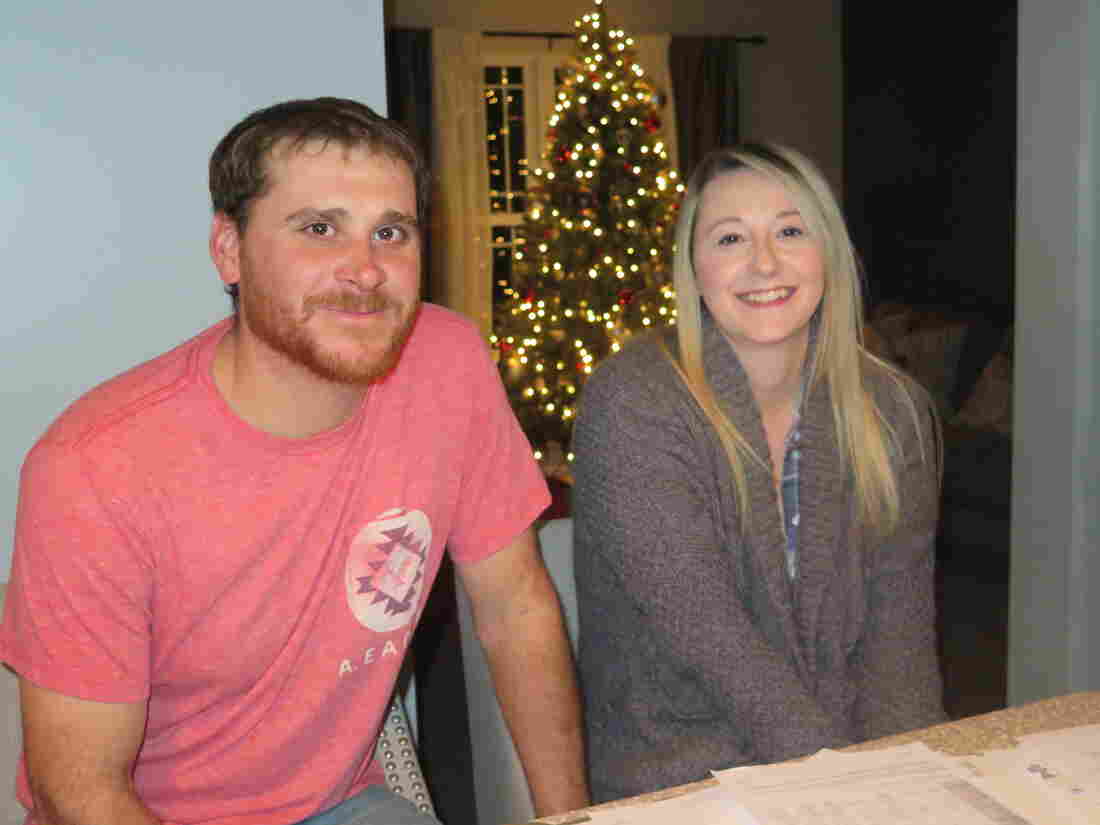 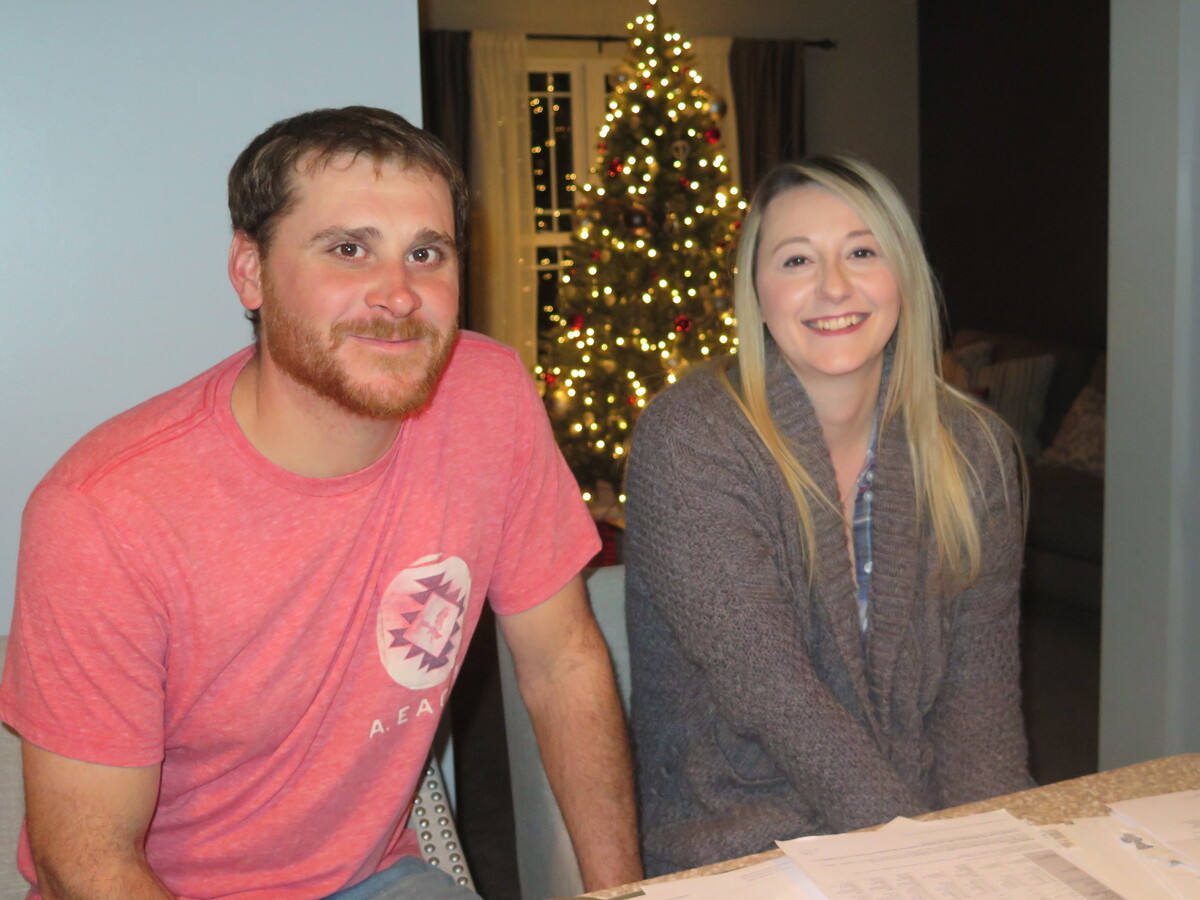 Matt and Abra Schultz, of Pottsville, Pa., say they're frustrated by the rising cost of health insurance.

Abra and Matt Schultz, both 32, recently built a house in a middle-class neighborhood in Pottsville, Pa. Matt works as a carpenter foreman for a construction company. He and Abra, his wife, are right in Trump's wheelhouse — Republicans in Republican Schuylkill County.

The couple spent December trying to decide whether to buy health insurance or skip it for 2017. They voted for Trump because they were fed up with how much they are paying for health insurance.

In mid-December in the couple's kitchen, Abra was sizing up their health insurance options. She showed off a thick notebook, along with a file folder with policy documents and notes piled as high as a stack of pancakes. "Don't touch my paperwork — don't even try to touch it," Abra joked to Matt. "I get so stressed out about it. I'll not pick one until the very last minute, like that deadline day."

Matt makes good money, but he usually gets laid off in the winter when construction slows down. For the past few years, he and Abra have bought coverage on HealthCare.gov, the Affordable Care Act exchange.

But they're in a tough spot. They make too much money to get a subsidy to help them pay for insurance. Subsidies are available only to those who make under 400 percent of poverty, or about $97,000 for a family of four. But while the Schultzes don't qualify for help, paying full price for health insurance stretches their budget to the limit.

Two years ago, when they first signed up for insurance on the exchange, they were paying $530 a month for a plan they liked, Abra says. The price rose a little for 2016, but the options for 2017 went up a lot — about 30 percent on average in Pennsylvania.

It's frustrating, she said, because she and her husband are relatively healthy and haven't needed that much care. Add to that the cost of a separate partially subsidized insurance policy for their two children, and the family is expecting to pay at least $14,000 in health premiums.

Abra resented the mandate to buy health insurance from the beginning. And she liked what Trump said about the Affordable Care Act on campaign stops, like one in King of Prussia in November, just before the election.

Abra said she wouldn't mind being in health insurance limbo while Trump and lawmakers debate the future of Obamacare.

Larry Levitt, with the Kaiser Family Foundation, said he understands her frustration with the law. "These are people who are playing by the rules, and doing the right thing, and they feel like they're getting the shaft," he said.

No one likes higher and higher premiums, he says, but there's a trade-off. "Before the ACA, to get insurance on your own, you had to fill out a medical questionnaire, and an insurer would only take you if you were reasonably healthy," Levitt said. "That kept premiums down, but it's because sick people were excluded from the market altogether."

Levitt said the law's goal was to to get insurance to a point where premiums only increase slightly every year while everyone can still get coverage, no matter their pre-existing condition. And, he says, any replacement plan devised by Republicans will have upsides and downsides, just like the Affordable Care Act. "If this were easy, it already would have happened," he said.

Abra said she understands the broader picture, but she needs to focus on what's best for her family — affordable health insurance.

"[Trump] just wants to fix what needs to be fixed, which I think is wonderful news," she says.

Abra did decide on a policy for her and her husband — she selected the plan that costs $938 a month because she wants to keep her current doctor. But if lawmakers eliminate the penalty for people who don't get insurance, she might take a risk and drop the coverage.

This story is part of a reporting partnership with NPR, WITF's Transforming Health project and Kaiser Health News.

A previous version of this story misspelled a reference to Larry Levitt's last name as Leavitt.