Accessibility links
Fitness Trackers Boost Zoo Elephant Health : Shots - Health News OK, so they're not using Fitbits. But zoos across America are using software to minutely track the activity, behavior and physiology of captive elephants, and using that data to improve zoo life.

Listen · 3:47 3:47
Fitness Trackers Aim To Improve The Health And Happiness Of Zoo Elephants 3:47 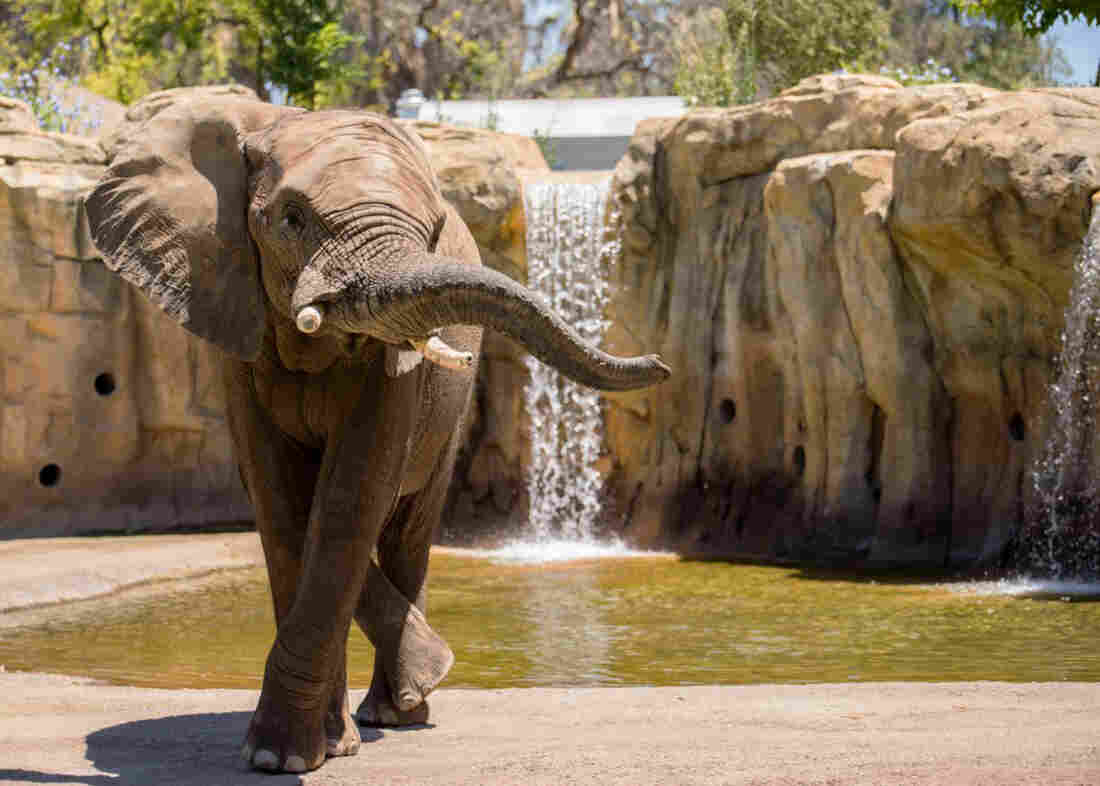 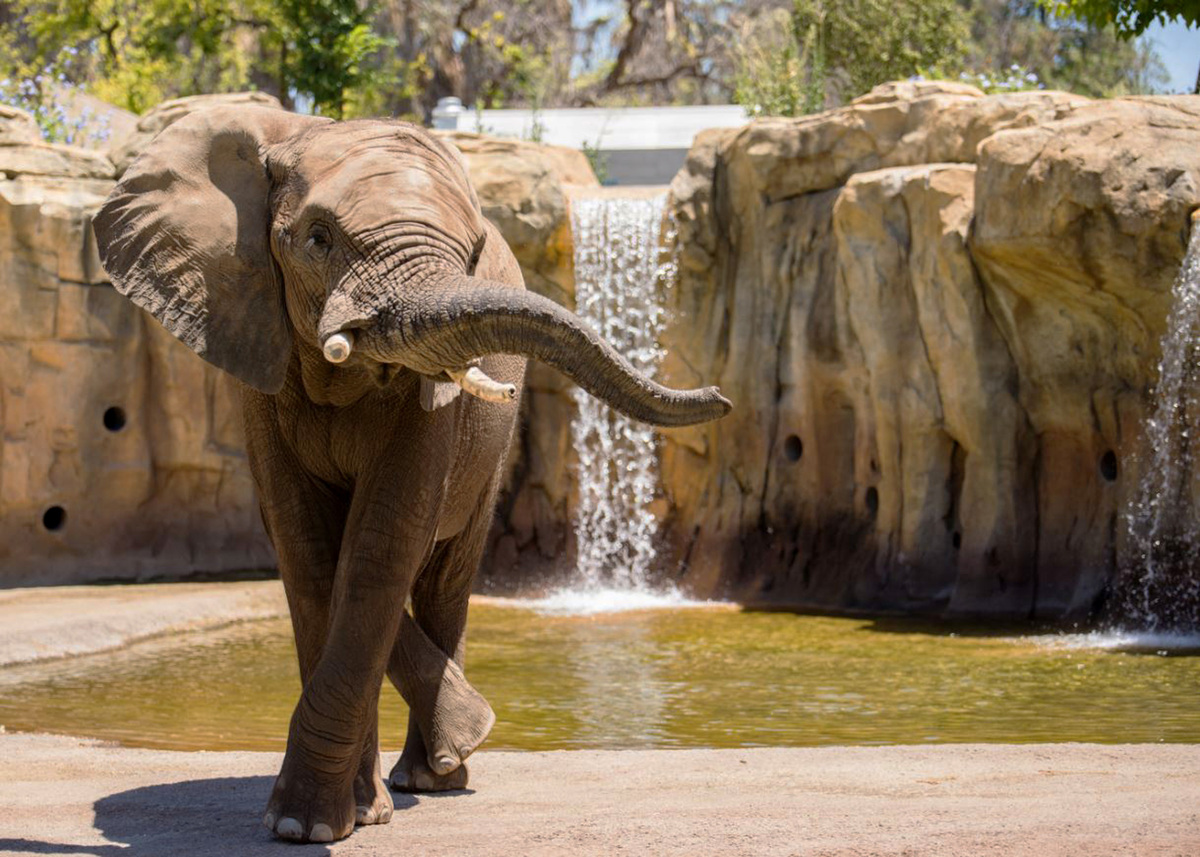 Musi, an African elephant, is one of Fresno Chaffee Zoo's five elephants enrolled in the Elephant Welfare Initiative.

Courtesy of the Fresno Chaffee Zoo

Fitness tracking is all the rage right now. If you want to, you can monitor your heart rate, count your footsteps and calories burned, and even monitor your sleep patterns, all by using devices that can fit around your wrist or in your pocket. But that's if you're human. Fresno Chaffee Zoo, in Fresno, Calif., is taking fitness tracking to a mammoth new level — part of a national project to guard the health and happiness of zoo elephants.

Take Shaunzi, for example, an Asian elephant in Fresno who was a little overweight a few years ago. So she started a new exercise routine and ditched the jelly beans for apples and carrots. Shaunzi's doing fine now; right around 6,000 pounds.

She's enrolled in a data-rich fitness tracking project, called the Elephant Welfare Initiative, that's striving to boost the well-being of captive elephants throughout the U.S. Caretakers in the national project, which includes more than 40 zoos, keep detailed logs of the animals' behavior and activity, and then receive a report card with suggestions about how to enhance the elephants' environment and routine.

"We'll get more concise information on body scoring," says Vernon Presley, the Fresno zoo's lead elephant curator. "Of how fit our elephants are. How much we time we spend with our elephants." 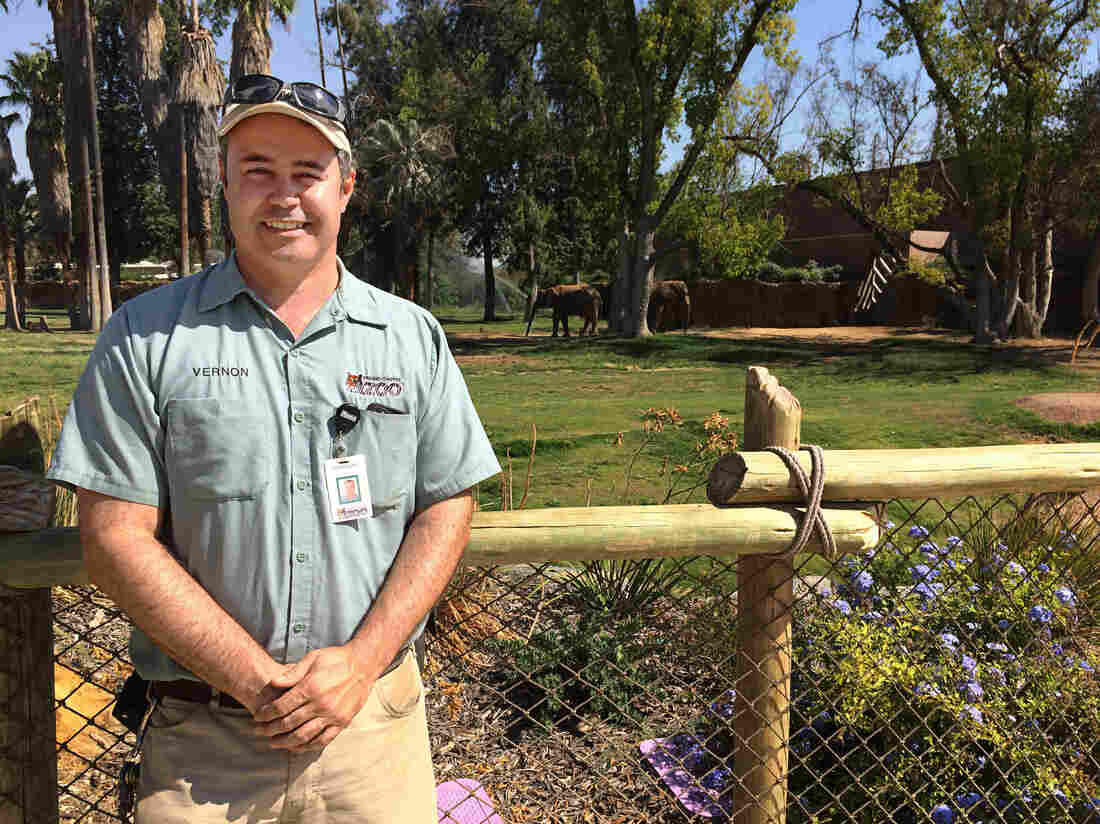 Vernon Presley is the lead elephant curator at the Fresno zoo. Software that gives elephant caretakers a wealth of data on the elephants' health and activity from day to day has helped zoo workers create more interesting social environments for the animals, Presley says. Kerry Klein/Valley Public Radio hide caption

In the past, zoo elephants have been known to suffer more from obesity, foot problems and reproductive complications than their wild counterparts.

"We really feel this is what they call a lifestyle change in the elephant community," Presley says. "We have to now commit even a greater amount of resources into monitoring our elephants' behavior and how well we're taking care of them."

The initiative arose out of a set of scientific studies that were published last summer in the journal PLOS One. Cheryl Meehan, a veterinary epidemiologist who directs the animal welfare consulting group, The AWARE Institute, says she and her collaborators in the research examined more than 250 elephants in extraordinary detail.

Evidence-based animal care may sound obvious, but wide-reaching data on captive animal populations is actually pretty rare. Studies in the past tended to examine only a small number of elephants, or only a limited set of welfare indicators.

In contrast, Meehan and her colleagues" collected blood and fecal samples, veterinary reports, hours and hours of video," she says. "We looked at GPS data to measure daily walking distances, and also photographs to assess elephant body condition."

Among their results, the team found that feet and joints were healthier in enclosures with soft soil or sand. That makes sense. More surprisingly, bigger enclosures didn't seem to make for healthier elephants. But isolation was a problem. One of the most important findings: The more social engagement, the healthier the animals. Meehan says socializing appears to fend off repetitive behaviors — such as pacing or swaying back and forth, which can be signs of anxiety.

In hopes of increasing the health and happiness of captive elephants, all this data has been brought together to shape the centerpiece of the Elephant Welfare Initiative: a software system that offers feedback on elephant care in real time. 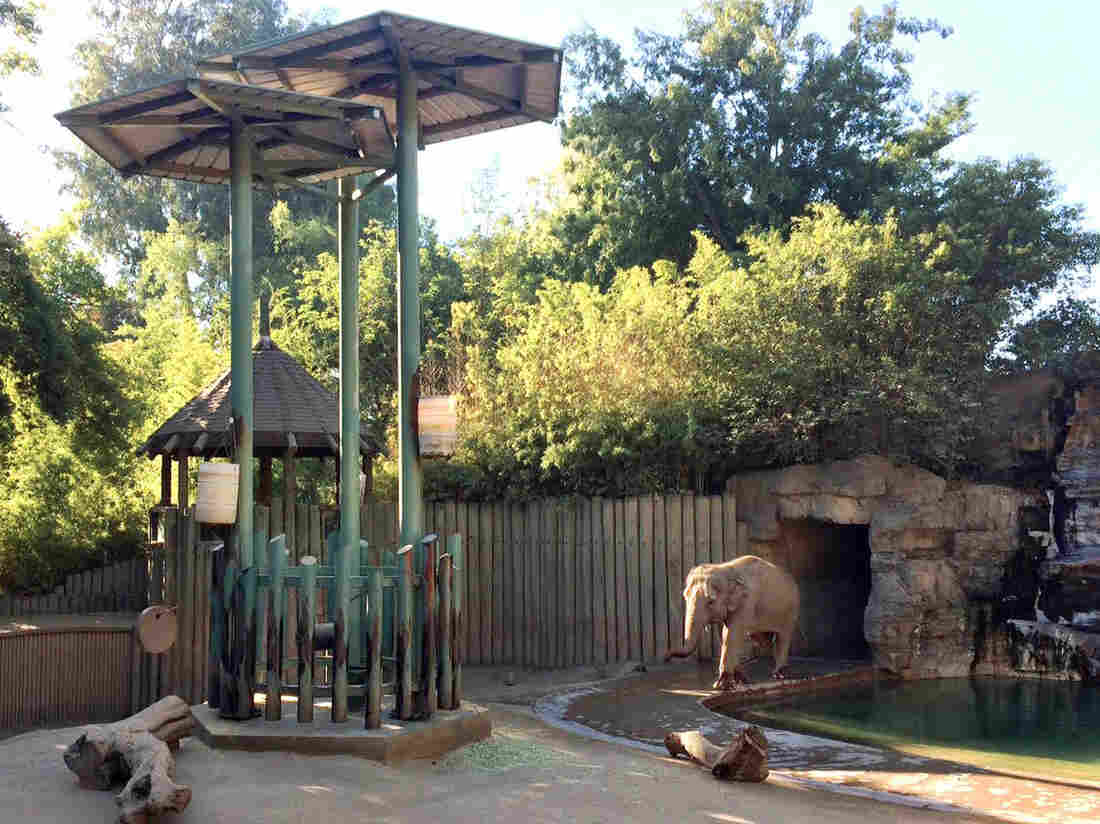 Shaunzi, an Asian elephant at the zoo in California's central valley, approaches a network of feeding structures that include dangling barrels, chains and other items. Research shows that female elephants in captivity who have to puzzle out a task to get their meals tend to have higher reproductive success. Kerry Klein/Valley Public Radio hide caption 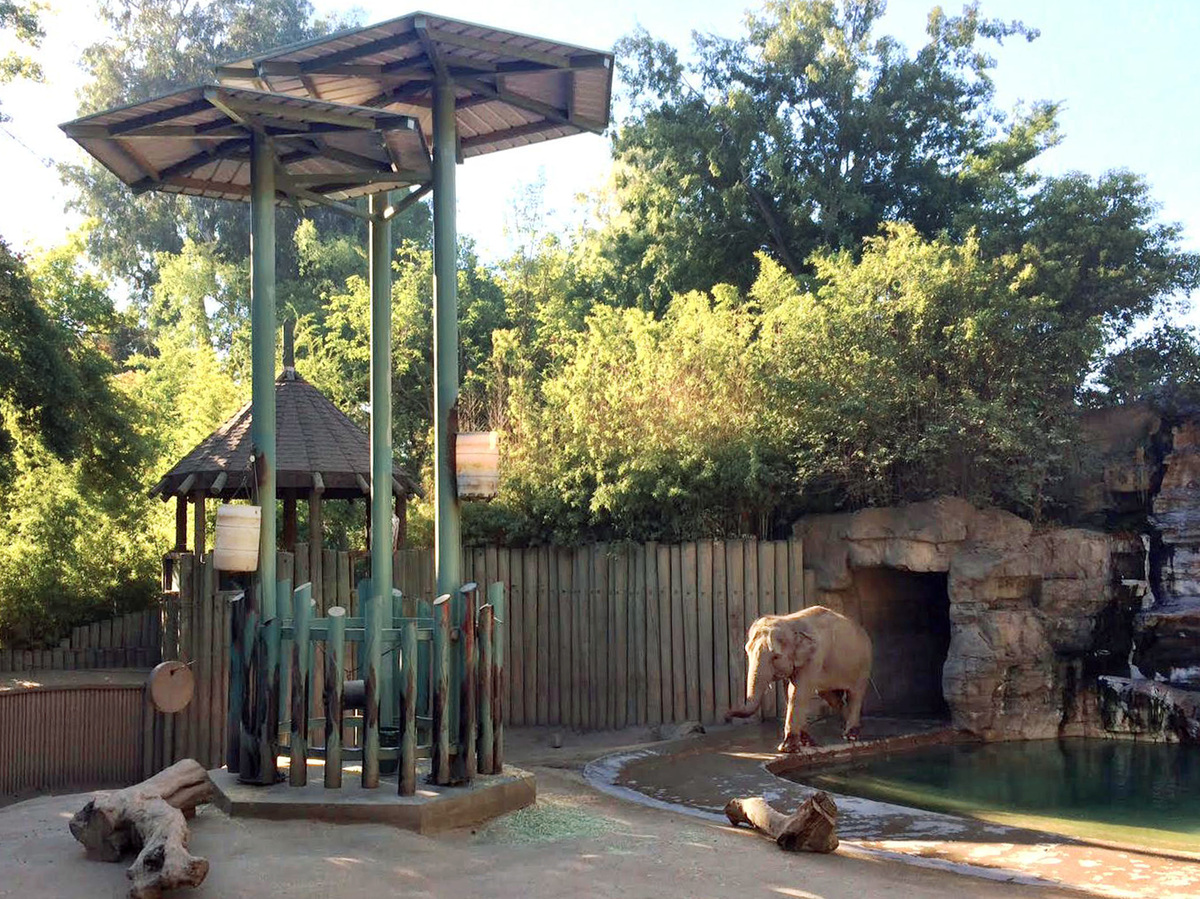 Shaunzi, an Asian elephant at the zoo in California's central valley, approaches a network of feeding structures that include dangling barrels, chains and other items. Research shows that female elephants in captivity who have to puzzle out a task to get their meals tend to have higher reproductive success.

Greg Vicino, the San Diego Zoo's associate curator of elephants, says the software dashboards are designed to make it easy for keepers to monitor the animals' health and activity.

"They're set up to look kind of like either little speedometers," Vicino says. "Or you can make it look basically like a bar chart that tells you where you are now, [and] where you stand next to the national average. You can kind of set targets for yourself." Not enough social activity today, for example? Make sure you boost those opportunities tomorrow.

Elephant keepers are already learning and adjusting. For instance, the research showed one way to make female elephants healthier is to challenge them with a puzzle – a task to complete — to get their food. Completing those sorts of challenges is correlated with better reproductive health.

So, at the Fresno zoo, when it's time for breakfast, Shaunzi confronts a tangled network of chains and hanging objects. She reaches her trunk into a barrel above her head, and shakes it until a shower of hay rains down.

Despite the evidence that these shifts in routine seem to be helping, not everyone is excited about the elephant initiative and its parent research. Kate Dylewsky, program associate for the animal advocacy group Born Free USA, says the PLOS One studies confirm that elephants don't belong in zoos at all.

"They showed that elephants in zoos only walk 5.3 kilometers a day, whereas, in the wild, African elephants can walk over 50 miles a day," Dylewsky says. "There were 25 percent with joint problems, 67 percent with foot problems, and then a whole host of reproductive issues."

Still, at Fresno Chaffee Zoo, Presley says zoo keepers are incorporating lessons learned from the research into their care, to the benefit of their elephants. They've helped Shaunzi and fellow Asian elephant Kara each lose around 2,000 pounds. They're varying the animals' feeding routines.

And they know the elephants would benefit from more social opportunities. Presley says they're looking for a new home for Shaunzi and Kara, so the two can regularly mingle with a bigger herd.