Accessibility links
A Pinworm Drug Gains Interest As A Potential Cancer Treatment : Shots - Health News Drugs that have been on the market for decades are being investigated for new uses. One is a medication used around the world to treat pinworm infections. 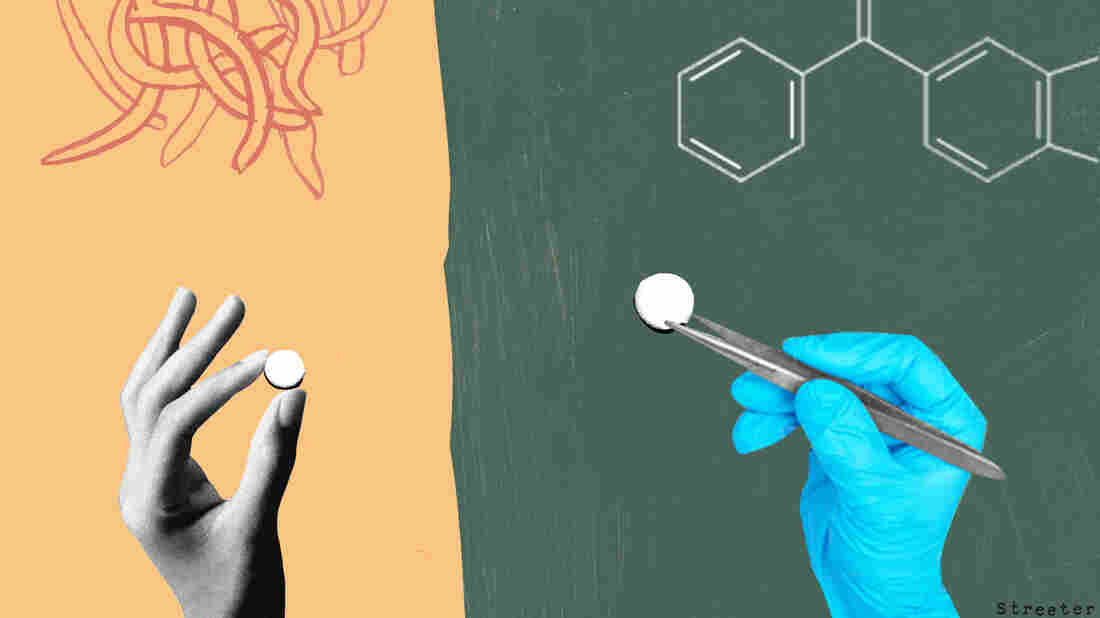 Generic drugs used for other conditions are being given a second look as cancer treatments. Katherine Streeter for NPR hide caption 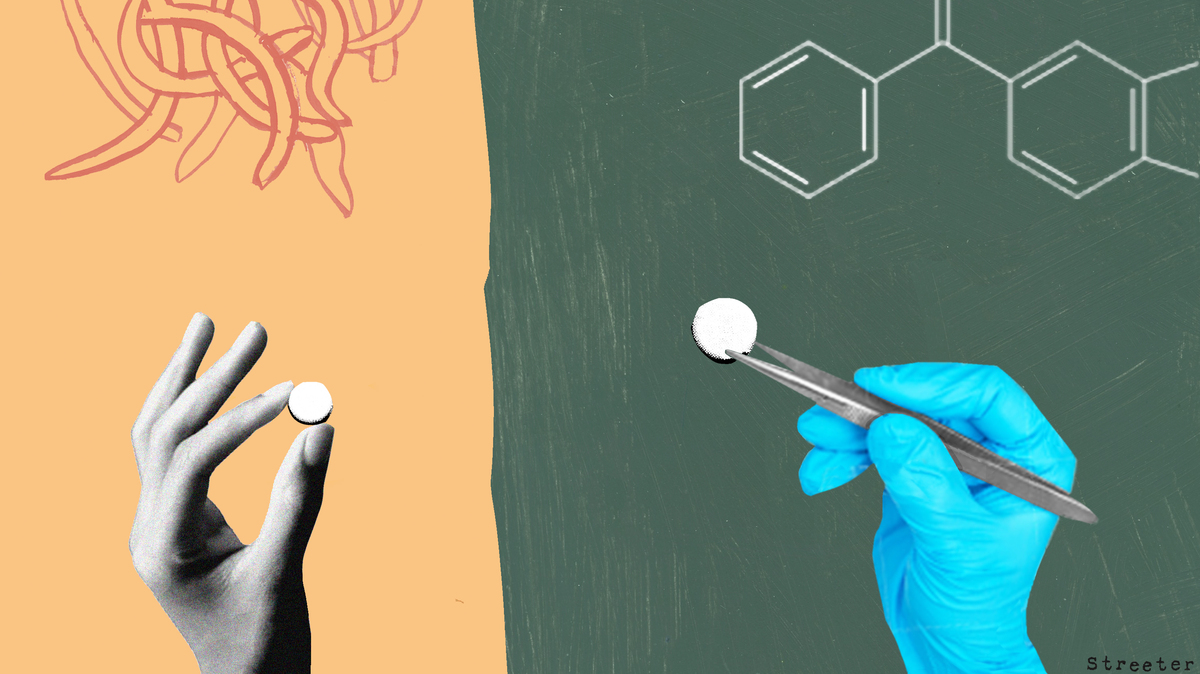 Generic drugs used for other conditions are being given a second look as cancer treatments.

Cancer researchers are testing whether a generic drug that has been used for more than 40 years to treat parasitic infections may also help fight cancer.

The tests of mebendazole are part of a growing effort to take a fresh look at old medicines to see if they can be repurposed for new uses.

I first learned about mebendazole several years back when my son came home from camp with a gross but common infection: pinworms.

My pediatrician prescribed two doses of mebendazole, and two weeks later the infection was gone.

Flash-forward a couple of years, and I was surprised to find on clinicaltrials.gov, the federal database of medical trials, that mebendazole was being investigated as a potential cancer drug.

Curious, I contacted Gregory Riggins, a cancer researcher at Johns Hopkins University who is testing the safety of mebendazole as a potential cancer treatment. He invited me to his lab in Baltimore. 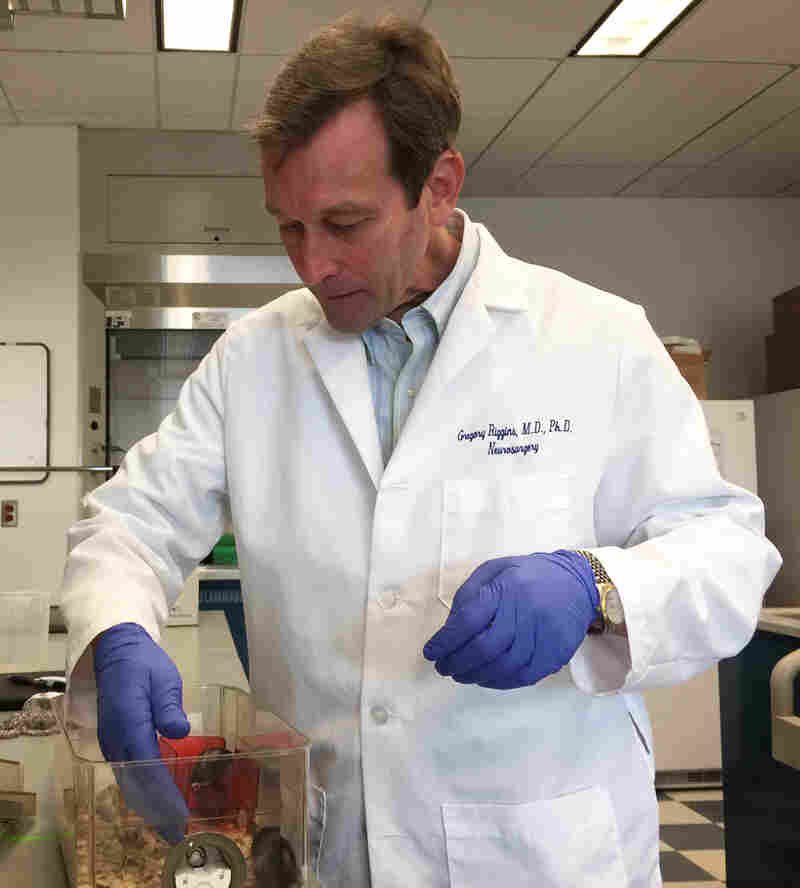 Gregory Riggins, a researcher at Johns Hopkins University, discovered that laboratory mice didn't develop cancer after being given a drug for pinworms. Allison Aubrey/NPR hide caption 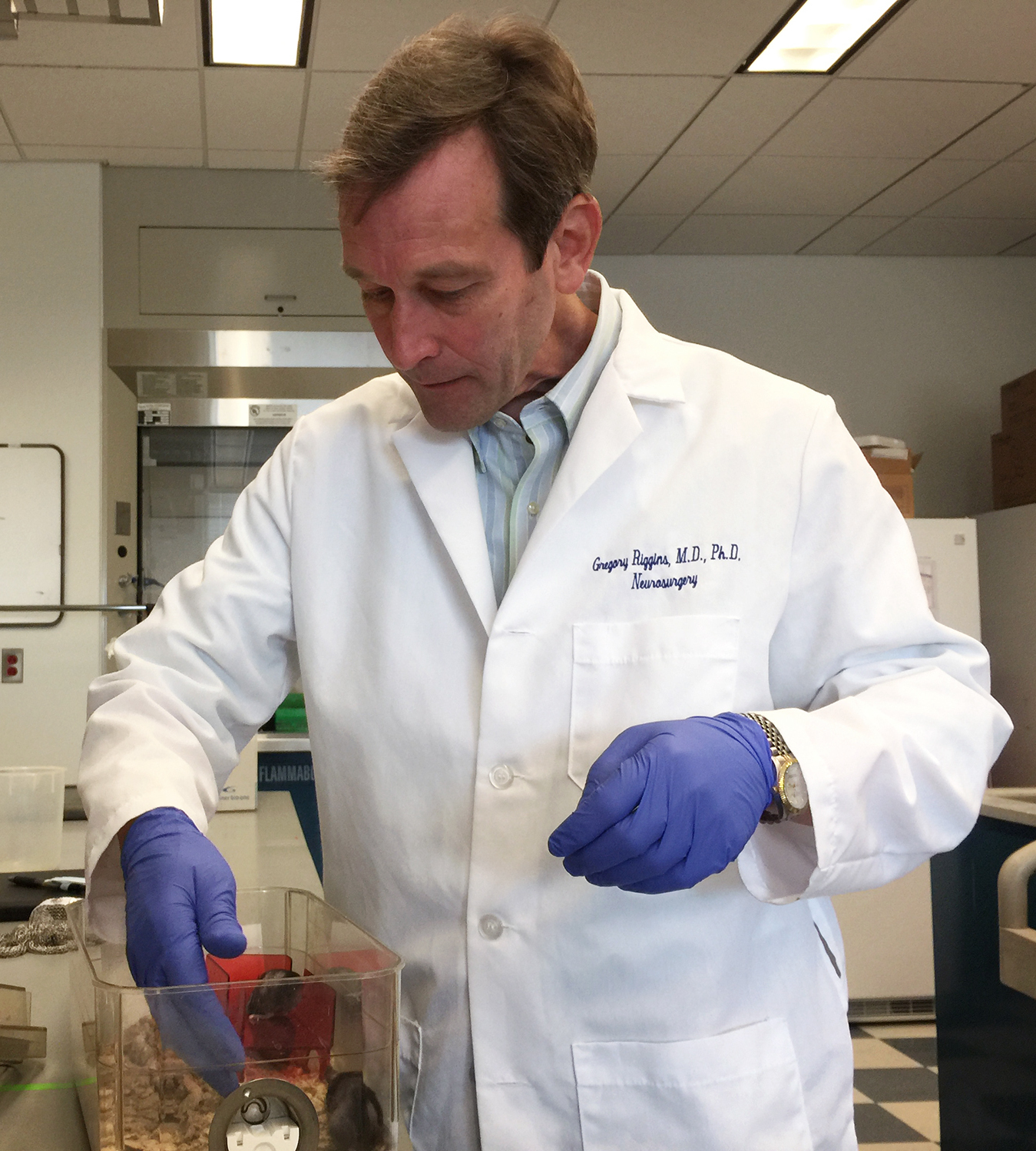 Gregory Riggins, a researcher at Johns Hopkins University, discovered that laboratory mice didn't develop cancer after being given a drug for pinworms.

Riggins took me inside and showed me cages of cancer research mice. A few years back, he said, his idea to test mebendazole started here.

Some of the lab animals got infected with pinworms, the same parasite my son had. The veterinarian at Johns Hopkins treated the whole colony of mice with an animal version of mebendazole.

The drug staved off the parasite, but it also did something surprising. Before the mice were treated for pinworms, Riggins and his team had implanted cancer cells into the animals' brains.

But after the mice got the pinworm drug, the cancers never developed. "Our medulloblastoma stopped growing," Riggins says. He found out that other researchers were conducting animal studies to see if the drug had effects on lung cancer and melanoma.

So he got funding to do two Phase 1 studies to test whether mebendazole is safe to use in brain cancer patients, one in children and another in adults. So far the drug appears to be safe and well tolerated by patients, Riggins says. That would be expected, given that it has been used for decades around the world to treat pinworms.

"Based on the preclinical studies it looks like it has promise," says Tracy Batchelor, director of the division of neuro-oncology at Massachusetts General Hospital, who is not involved in the research. "The next step is to look for a benefit in a Phase 2 trial." That would test whether mebendazole has any effect on cancer in people. Riggins hopes to conduct that sort of trial in adult brain cancer patients.

At a time when it can cost a billion dollars to develop a new drug, the idea of repurposing existing drugs is appealing, according to Bruce Bloom. He's the president and chief science officer of Cures Within Reach, which has helped to fund Riggins' research.

Bloom points to research on metformin, a diabetes drug that's being looked at as a potential treatment for a dozen different kinds of cancer and also tuberculosis. A common blood pressure drug, propranolol, is also being studied.

"It's not likely that mebendazole or any other single repurposed drug is ever going to cure cancer," Bloom says. But he envisions the possibility that combinations of repurposed drugs might help the body to manage cancer.

Any use of mebendazole as a cancer drug would be years away, if it proves to work at all. Most drugs that emerge from Phase 1 trials never deliver the hoped-for benefits.

And in an odd twist to a complicated story, the cost of mebendazole in the U.S. has skyrocketed in recent years. Though it remains very affordable in most countries, the wholesale cost of a 100 mg tablet in the U.S. has risen from $4.50 in 2011 to $369 in 2016, according to Truven Health Analytics.

The dynamics that led to the price hike were in play before interest rose in the drug as a potential cancer treatment, analysts say. In 2013, Amedra Pharmaceuticals bought marketing rights to mebendazole from Teva Pharmaceuticals. It already owned rights to another key generic antiparasitic drug, albendazole.

"At that point, anyone who has had a high school or undergraduate economics course would be able to explain the price hike," says Joey Mattingly, an assistant professor in the department of pharmacy practice and science at the University of Maryland School of Pharmacy who studies generic drug pricing.

That leaves people with pinworm infections with the choice of two expensive prescription medications or cheaper over-the-counter options.

"Pinworms are exceedingly common," says Rachel Orscheln, an assistant professor of pediatric infectious diseases at Washington University and St. Louis Children's Hospital. The CDC estimates 40 million people are infected in the U.S. annually. Orscheln says the people most likely to be infected are children and people who are living in group settings such as nursing homes.

"There are certain cases where we do need to prescribe this medication," says Orscheln. But at the higher price, she says, "I'm very disinclined to prescribe [it]." She says over-the-counter drugs such as Pin-X or pyrantel, can work just as well in children, so "I'm very likely to steer people in that direction."