Accessibility links
Have Your Wishes For Care Known Before A Health Crisis Strikes : Shots - Health News Before a health crisis hits, think deeply about the care you want and what you'd like to avoid. Make sure your family and your doctor understand your wishes, says John Henning Schumann. 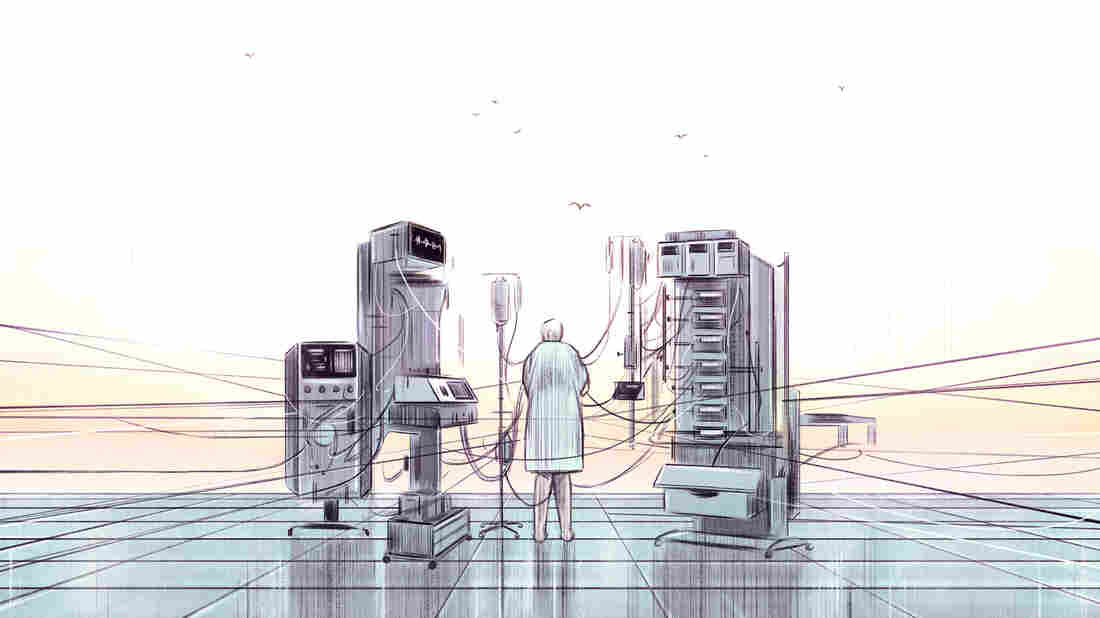 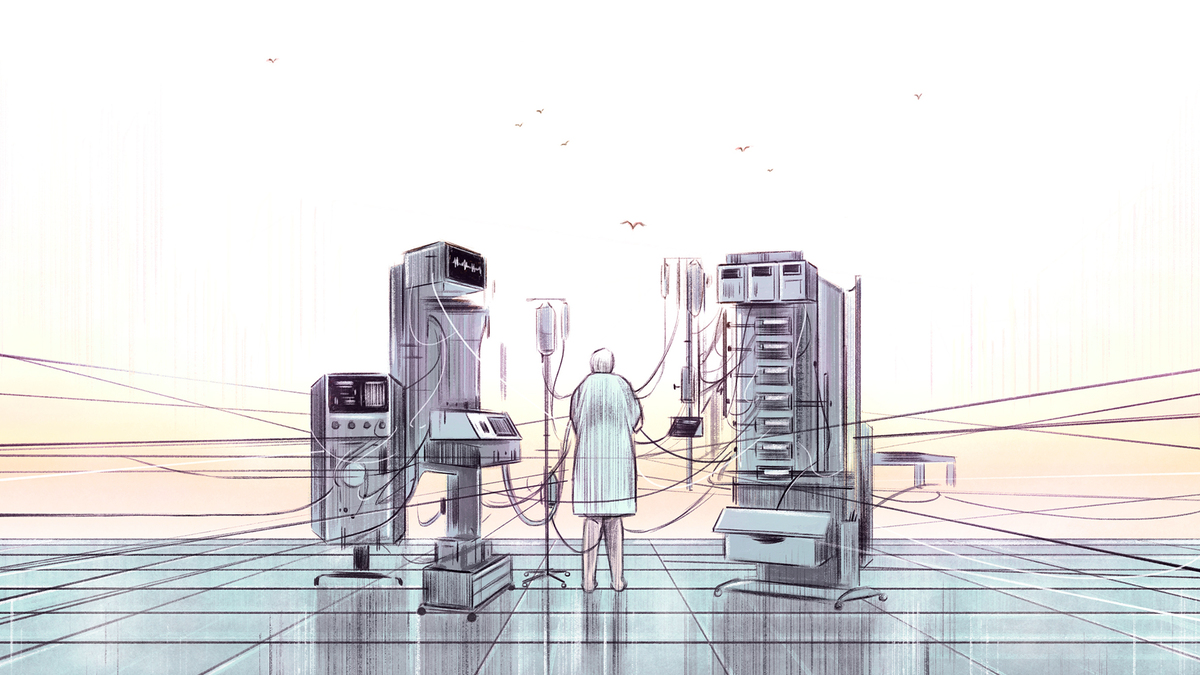 Helen was 82. She'd survived both breast cancer and outlived her husband.

One summer day she began bleeding from her colon and was admitted to the hospital. We assumed the worst — another cancer. But after she endured a series of scans and being poked with scopes, we figured out that she had an abnormal jumble of blood vessels called an arteriovenous malformation in the wall of her colon.

The finding surprised us, but the solution was clear: Surgery to remove that part of her colon should stop the bleeding once and for all. The operation went well. But afterward Helen's lungs filled with fluid from congestive heart failure. Then she caught pneumonia and had to be put on a ventilator in the intensive care unit.

Her medical problems and our treatments had simply stressed her aging organs beyond their capability.

On morning rounds I took inventory: Helen had a breathing tube in her throat connected to the ventilator; a large IV in her neck; a wire inserted into her wrist artery to measure her blood pressure; a surgical wound drain and a bladder catheter to collect her urine.

Helen was tethered to our ICU, with no clear sign of when or even if she would leave. Helen's only daughter was distraught—both about her mother's condition and because she had never discussed what her mother would want in such a situation.

I found myself wishing we could just stop our full-court press on Helen. The humane thing to do, it seemed to me, would be to stop aggressive medical treatment and let nature take its course. After nearly two weeks of intensive care with no improvement in her condition, Helen's daughter instructed us to stop the mechanical ventilator. She died an hour later.

Stories like Helen's occur in ICUs all over the country every day, unfortunately. Often these situations are flashpoints of tension between the hopes and expectations of families and the realities seen by the medical team. But it doesn't have to be this way. If we lessen the stigma around death as an unmentionable topic by forcing ourselves to talk to our loved ones about what we want at the end of life, we can vastly diminish the amount of energy and suffering that come with trying to prolong life when nature tells us otherwise.

Many of us in the medical profession who have seen the futility of cases like Helen's take steps to avoid spending our dying days in a hospital that way (or in a hospital at all). As Dr. Ken Murray wrote in a 2011 essay, doctors die differently, often forgoing invasive and expensive treatment. This approach is different than the one taken by most Americans, but shouldn't be, he argued.

We know that Medicare typically spends a lot on people near the end of life. Medicare spending on inpatient hospital services in 2014 was seven times higher for people who died ('decedents') that year than those who survived.

I'll admit that this is a bit of a tautology, because people sick enough to die from chronic illnesses and complications related to aging are much more likely to make ample use of their health insurance.

But in my view, the crux of the problem is the wide mismatch between what people say they want (to die at home) and where they wind up (still dying mostly in hospitals and nursing homes). As a result too many American deaths are still overly medicalized, robbing us of our chance at a peaceful passage.

The trend is moving in the right direction, however, as more of us express our care goals and die at home or in hospice.

One strategy is to imagine a point in your life when fighting to stay alive would be counterproductive. Would it be when you had advanced dementia and couldn't recognize your family? What if you lost your ability to feed yourself? Work backward from there, and remember that when it comes to medical care, less is often more.

At that key point, your directive could limit your health care to seeking comfort rather than an attempted cure. You'll have to be decisive about foregoing life-sustaining treatment, because of the inertia of the health care system and reluctance from our loved ones. Dr. Ezekiel Emanuel, a bioethicist, famously offered this viewpoint in a 2014 article titled, "Why I Hope to Die at 75."

Emanuel's argument led to pushback. Many people, like my parents, were offended at the idea of giving up on life at 75.

But that's not what Emanuel was actually arguing. He didn't write the story's headline, which more accurately would have been something like, "Why I Plan to Stop Screening Tests at Age 75 Because They're More Likely to Hurt Me Than Help Me."

I checked with Emanuel, now 59, to see if he'd had any change of opinion.

"The article reflects my view," he replied by email. "I am stopping ... colonoscopies and other screening tests at age 75. I am stopping statins and other medications where the rationale is to extend my life." He said he's not trying to provoke. "It is my view. It is provocative only because other people find it so."

Having cared for many patients like Helen, who wind up in a vortex of intense medical care, I find what Murray and Emanuel have suggested to be highly appealing.

That said, it's important for those of us looking to de-medicalize death to remember that is our choice. Many people opt instead to do everything to stave off death.

The message is simple: Think deeply about what you want beforehand. Then tell your family. Share it with your doctor. We truly want to honor your wishes.