Accessibility links
Getting Suboxone To Fight Opioid Addiction Could Get Easier, As Insurers Cut Red Tape : Shots - Health News Doctors treating people addicted to opioids often need approval from insurers before giving drugs that ease withdrawal. The delay can be risky for patients. Insurers are starting to come around. 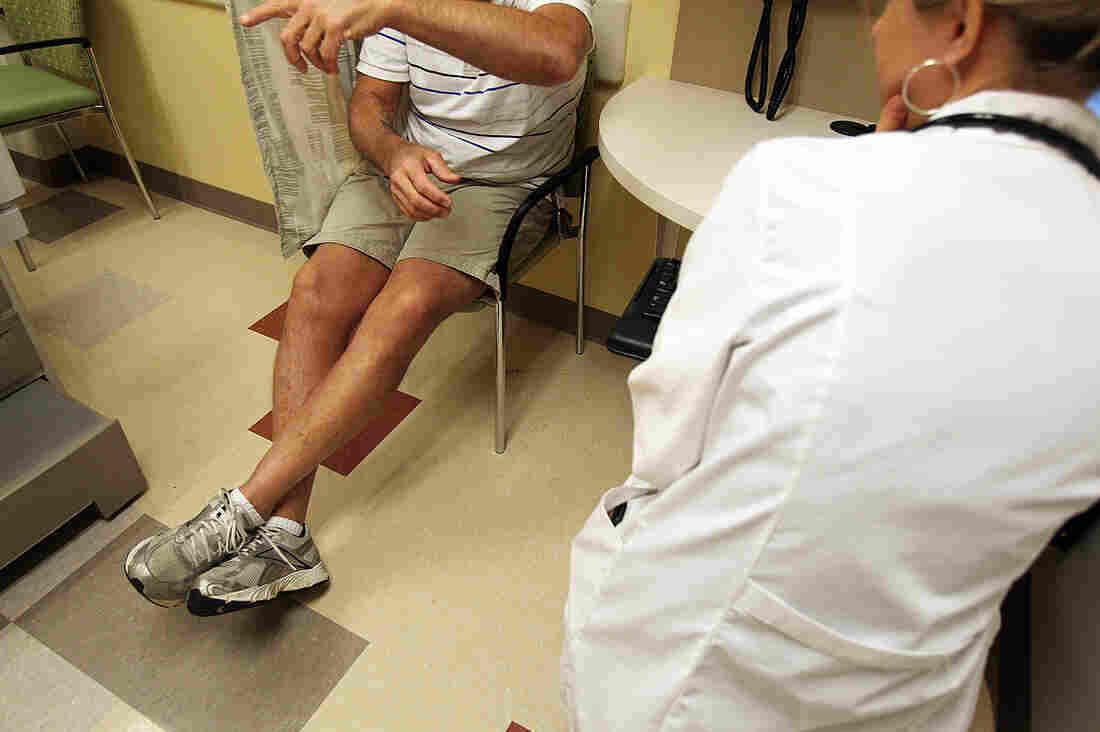 A doctor at a Boston Medical Center clinic counsels a patient who has become addicted to opioid painkillers, and wants help kicking the habit. Addiction specialists say drugs like suboxone, which mitigates withdrawal symptoms, can greatly improve his odds of success. Suzanne Kreiter/Boston Globe via Getty Images hide caption 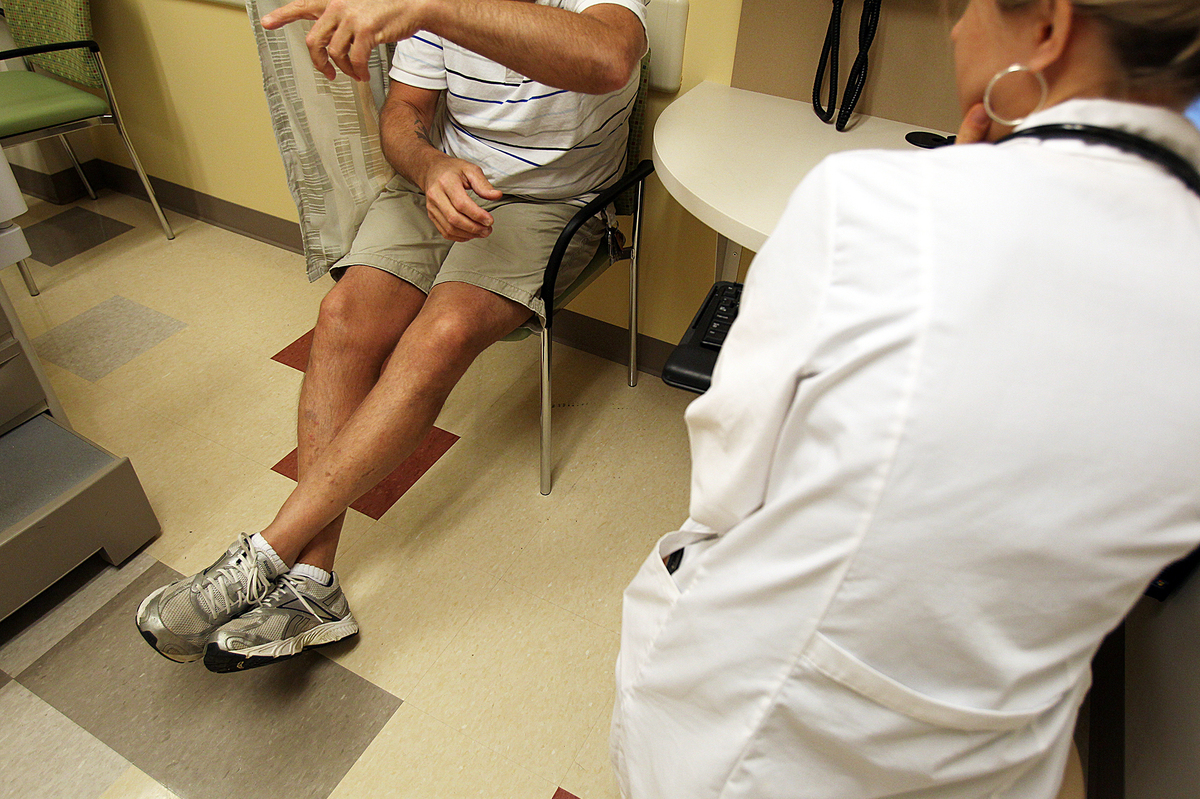 A doctor at a Boston Medical Center clinic counsels a patient who has become addicted to opioid painkillers, and wants help kicking the habit. Addiction specialists say drugs like suboxone, which mitigates withdrawal symptoms, can greatly improve his odds of success.

Aetna, one of the nation's largest insurance companies, says that starting in March it will remove what's been a key barrier for patients seeking medication to treat their opioid addiction. The change will apply to all its private insurance plans, an Aetna spokeswoman confirmed. Aetna is the third major health insurer to announce such a switch in recent months.

Specifically, the company will stop requiring doctors to seek approval from the insurance company before they prescribe particular medications ― such as Suboxone ― that are used to ease withdrawal symptoms. The common insurance practice, called "prior authorization," has frustrated doctors because it sometimes results in delays of hours to days before a patient can get the needed treatment.

That delay may sound like just a technicality ― a brief pause before treatment. But addiction specialists say this red tape has put people's ability to get well at risk. It gives them a window of time when they may change their minds or relapse if they start experiencing symptoms of withdrawal.

"If someone shows up in your office and says, 'I'm ready,' and you can make it happen right then and there ― that's great," said Dr. Josiah Rich, a professor of medicine and epidemiology at Brown University, who frequently treats patients who are addicted to opioids.

"If you say, 'Come back tomorrow, or Thursday, or next week,' there's a good chance they're not coming back," he said. "Those windows of opportunity present themselves. But they open and close."

Aetna's policy change comes as addiction to heroin and opioid painkillers continues to sweep the country. More than 33,000 people died from overdosing on these drugs in 2015, the most recent year for which statistics are available. Easing the prescribing restriction puts Aetna in the company of Anthem and Cigna, which also recently dropped the prior authorization requirement for their privately insured patients throughout the country. Anthem made the switch in January and Cigna last fall.

Both those companies took the step after facing an investigation by New York's attorney general, whose office was probing whether the firms' coverage practices unfairly barred patients from needed treatment. The insurers adjusted their prescribing requirements as part of larger settlements.

Treatment specialists hope the changes in policy will start making addiction meds more easily available. In New York, for instance, the attorney general's office plans to follow up with other insurance carriers.

"Just think of any big health insurance company that hasn't recently announced they're doing away with this, and it's a pretty safe bet they've got prior authorization in place," said Dr. Andrew Kolodny, a Brandeis University senior scientist and the executive director of the advocacy group Physicians for Responsible Opioid Prescribing.

The prior authorization requirements have caused intense problems for treatment centers, said Traci Green, an associate professor at Boston University's School of Medicine and deputy director of the hospital's injury prevention center. New England has been particularly hard hit by the opioid crisis, and Boston Medical Center has an urgent care center focused on this patient population.

Though less than a year old, the center has already treated thousands who have problems with the drugs, Green said. To help patients get needed care ― before it's too late ― the center had to hire a staffer devoted specifically to filling out all the related insurance paperwork.

"It was like, 'This is insanity,' " Green said, adding that "navigating the insurance was a huge problem" for almost every patient.

But defenders of the requirement maintain that such controls do have value, as a safeguard when prescribing any potentially dangerous drug. "[It's] not a tool to limit access. It's a tool to ensure patients get the right care," said Susan Cantrell, CEO of the Academy of Managed Care Pharmacy, an industry trade group.

Some other large insurance carriers ― such as United Healthcare and Humana ― list on their drug formularies a prior authorization requirement for at least some if not all versions of anti-addiction medicine. A spokesperson from Humana said the practice is used "to ensure appropriate use."

It's generally agreed, though, that the practice is also used to put limits on the prescribing of expensive medications. The cost of these drugs that treat opioid addiction varies, based on brand and precise formulation, but can go as high as almost $500 for a 60-pack prescription. That may last a patient one month.

Regardless of the insurer's intent, critics say, those extra forms and hoops do make it more difficult for patients in need to get their medicine ― and ultimately do more harm than good.

"If you would like a physician to not do a particular treatment, put a prior authorization in front of it," Rich said. "That's what they're used for."

Meanwhile, advocates for addiction treatment and health professionals are hoping to build on what they see as a new trend among insurers.

Earlier this month, the American Medical Association sent a letter to the National Association of Attorneys General, calling for increased attention to insurance plans that require prior authorization for Suboxone or other similar drugs.

Minnesota's attorney general has written to health plans in the state, asking they end prior authorization for addiction treatment. And New York has heard from other states interested in tackling the issue, a representative of the attorney general's office said.

Meanwhile, another project, called Parity Track, is soliciting complaints from consumers. "Parity laws," require insurers to cover addiction treatments at the same level they do other kinds of health care, Parity Track argues.

The prior authorization requirement "doesn't meet the sniff test for parity," said Dr. Corey Waller, an emergency physician who chairs the American Society of Addiction Medicine's legislative advocacy committee. "It's a first-line, Food and Drug Administration-approved therapy for a disease with a known mortality. [For] every other disease with a known mortality, the first-line drugs are available right away."