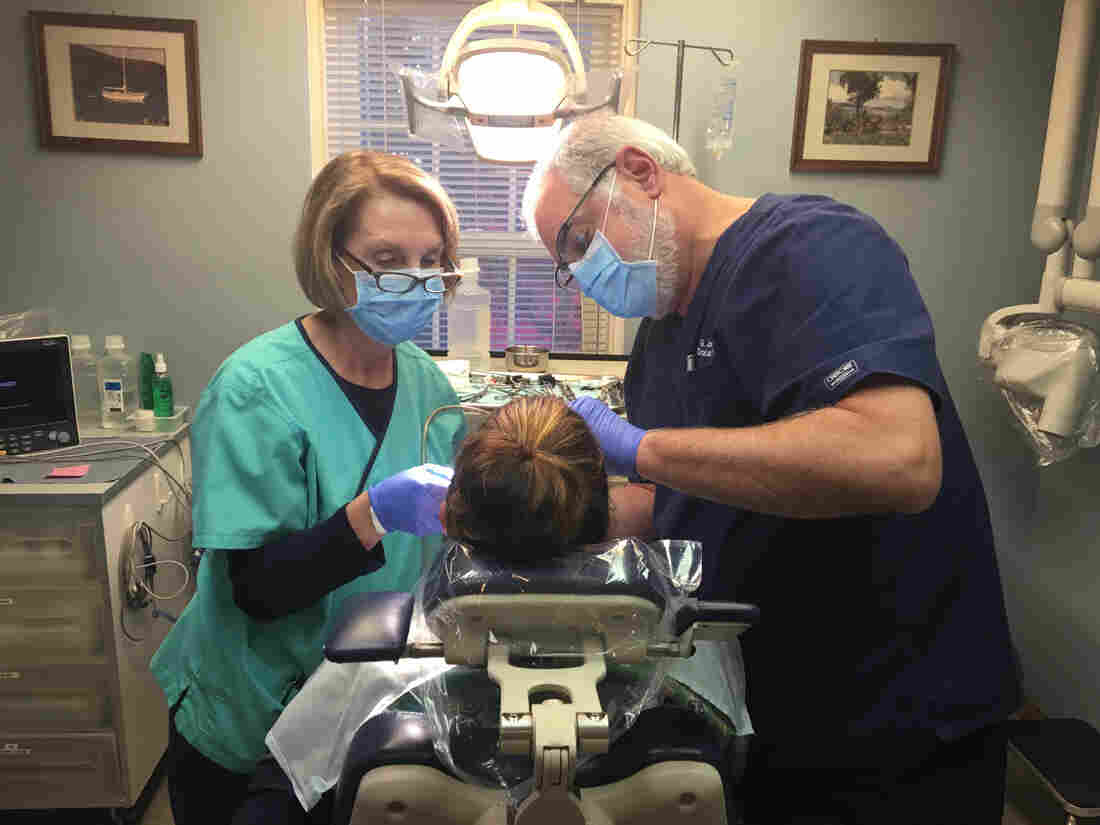 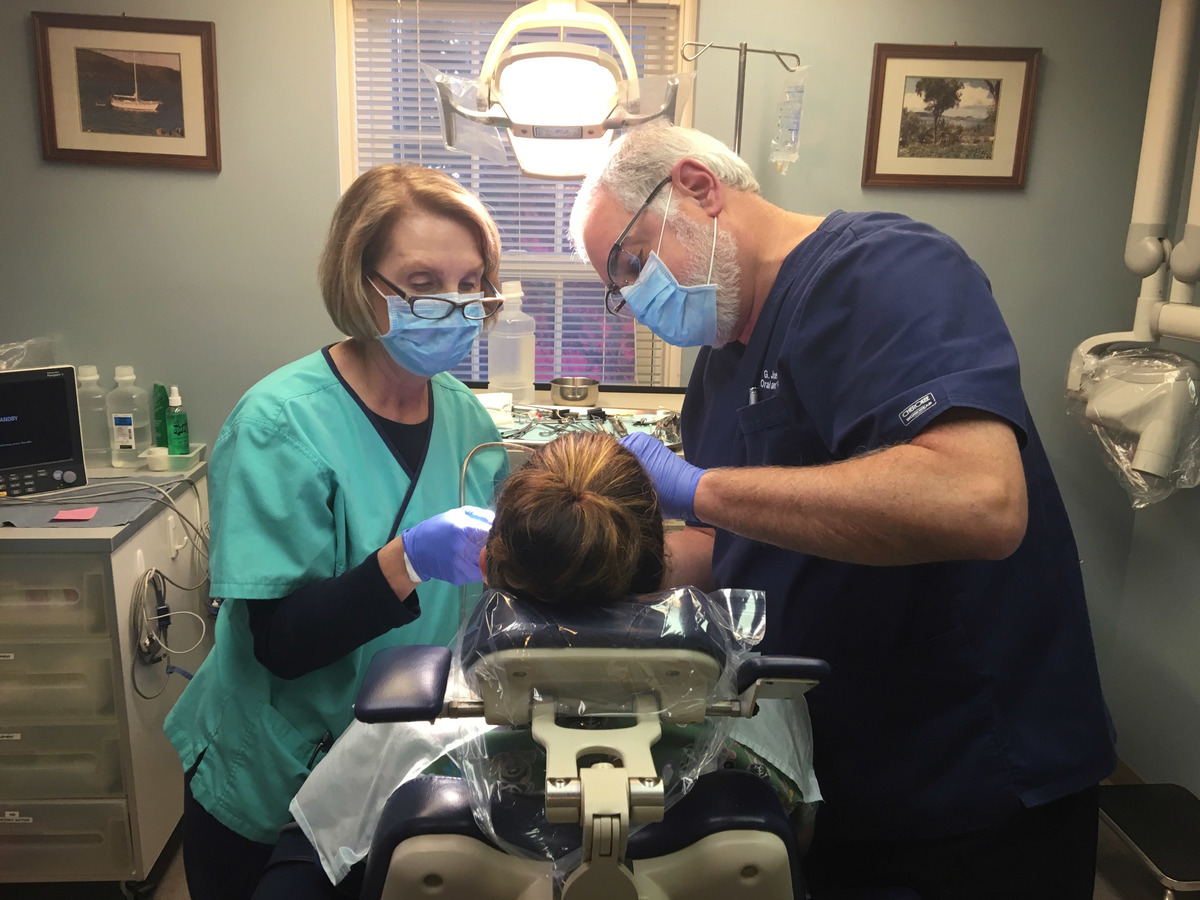 Dr. Joel Funari performs some 300 tooth extractions annually at his private practice in Devon, Pa.. He's part of a group of dentists reassessing opioid prescribing guidelines in the state.

Firsts can be life changing — think about your first kiss, your first time behind the wheel of a car. But what about the first time you got a prescription for a narcotic?

James Hatzell, from Collingswood, NJ, is now a technology officer for a college addiction treatment program. He didn't realize it at the time, but that spring day of his junior year of high school — seven years ago — was a pivotal moment in his life.

"We're in our 2001 Honda Odyssey minivan, driving to the dentist," Hatzell recalls. "And we get there, and I'm just pumped. I was very excited to get my wisdom teeth out."

The prospect of pain didn't thrill the teen, but he'd heard from friends that when the dentist took out his teeth, he'd get his very own bottle of pain pills.

Dentists have long been frequent prescribers of immediate-release opioids like Vicodin and Percocet for the pain from tooth extractions. That's a lot of pills and teeth; annually more than 3.5 million people, mainly young adults, have their wisdom teeth removed.

For many patients, thse drugs never pose a problem. But deaths of some 165,000 people in the U.S. in the last 15 years involved an overdose of heroin or opioids, and many other people are struggling with addiction. Health officials say the nation's major epidemic of drug use has been fueled by the misuse of prescription painkillers.

So dentistry is at a crossroads. Many in the field are now reassessing their prescribing habits, with state dental boards and associations issuing new guidelines for patients and practitioners. As of this year, Pennsylvania requires new dentists and those renewing their clinical license to get training in the best practices of opioid prescribing.

Hatzell says he was always a little afraid of narcotics in high school, until that day he had dental surgery. He'd tried Vicodin recreationally before that, he says, but with caution. Friends would find an extra pill in a medicine cabinet at home; they'd crush it, mix it with pot, and share it.

But getting his own prescription from a health professional felt different, Hatzell recalls. It seemed legitimate — like maybe it wasn't as dangerous as he'd feared.

On the way home from the dentist's office that day, Hatzell was still high from the drugs he was given during the procedure and could not wait to pop his first pill. 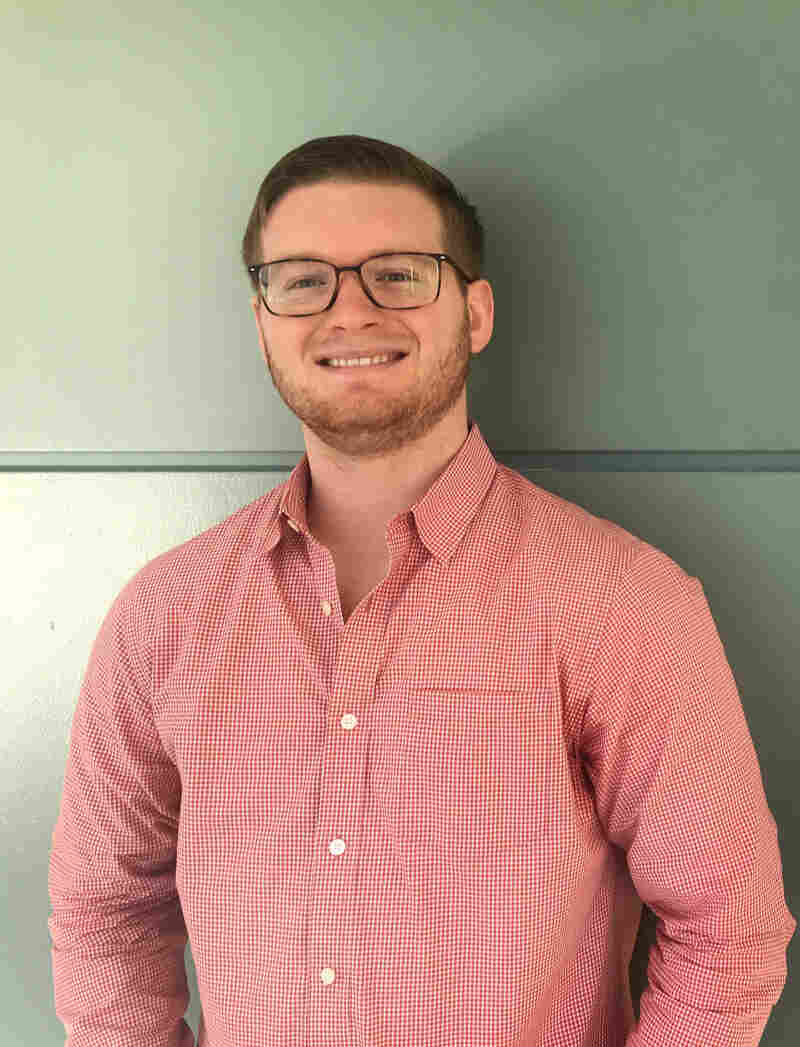 At 17, James Hatzell received his first prescription of opioids after undergoing surgery to have his wisdom teeth removed. He soon started abusing the drugs, and became addicted, he says. Now 23, he's been in recovery for three years. Elana Gordon / WHYY hide caption 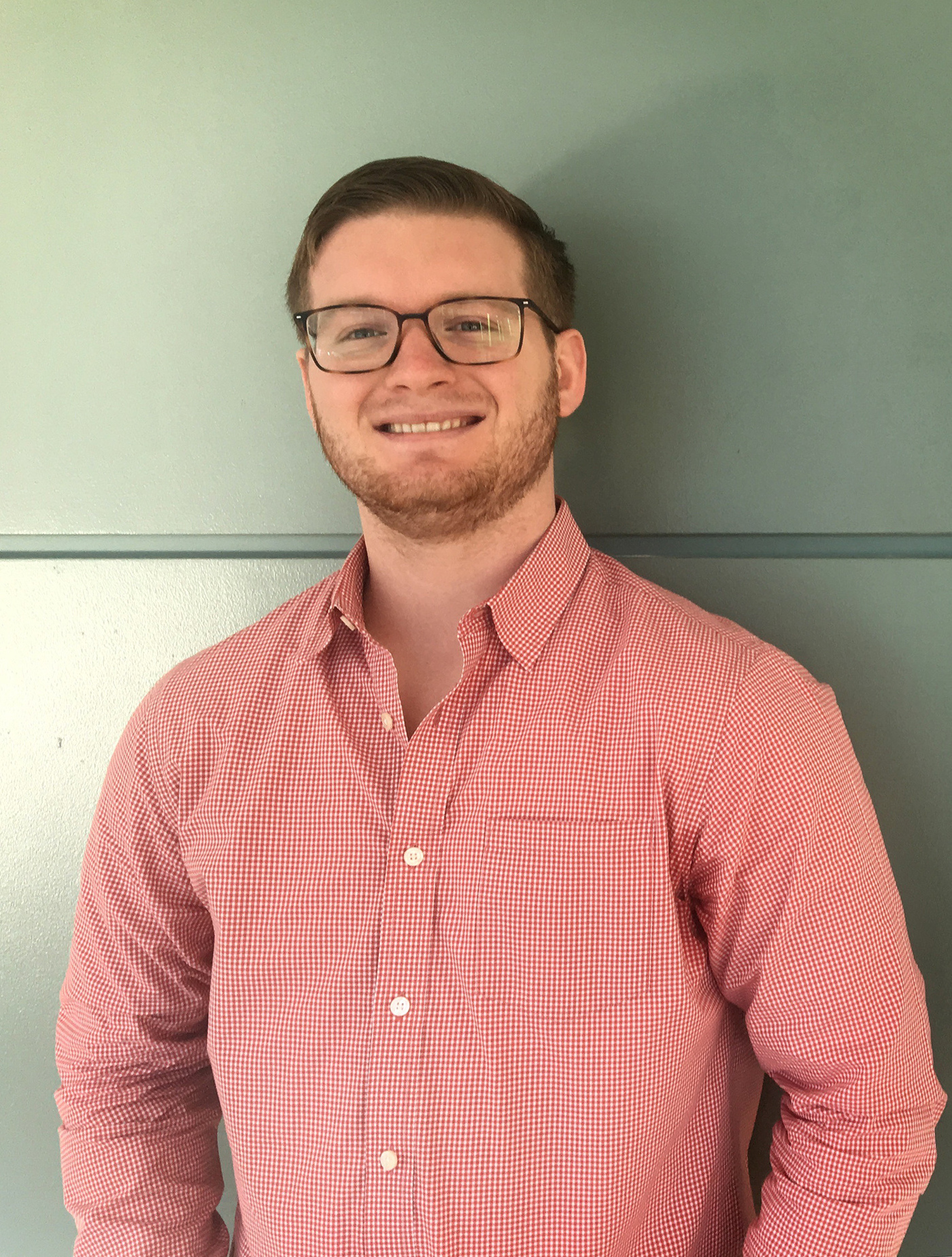 At 17, James Hatzell received his first prescription of opioids after undergoing surgery to have his wisdom teeth removed. He soon started abusing the drugs, and became addicted, he says. Now 23, he's been in recovery for three years.

But he knew where she'd hid the bottle. When she wasn't watching, he sneaked into her room, emptied out the pills, and replaced them with Advil.

"I definitely was every parent's worst nightmare," Hatzell now says, and laughs.

He can joke about that day now, he says, but what opioids did to him and his family wasn't funny. A few years later he was arrested for dealing drugs in college.

A 2011 study in the Journal of the American Dental Association estimates that dentists are responsible for 12 percent of prescriptions for fast-acting opioid pain relievers — just below general practitioners and internal medicine doctors as top prescribers of common opioids. Roughly 23 percent of opioids in the U.S. are used non-medically, according to the study.

Dr. Joel Funari, a dentist who specializes in oral and maxillofacial surgery in Devon, Penn., says that when he started out as a dentist more than three decades ago it was common to prescribe a bottle of 30 or more narcotic pills after procedures such as a wisdom tooth extraction. He now calls that excessive prescribing.

"Dentists don't like to see patients in pain," Funari explains. "We tend to be compassionate people and I think we were falling into a trap we were creating ourselves."

In 2014, Funari joined a group tasked by the Pennsylvania department of health to develop prescribing guidelines for dentists. In reviewing the science, he and his colleagues realized there's a better way to address standard dental pain.

"Non-steroidal anti-inflammatory drugs — the Motrins, the Advils, the Aleves — when used in a certain way, are very effective," Funari says. "More effective than the narcotics."

NSAIDs reduce inflammation, which is a main source of the pain, he says. And because wisdom tooth removal is so common, it has actually been an ideal procedure to study the benefits from this alternative in treating pain.

The 2014 guidelines that Funari and his colleagues came up with are the state's first to tackle how to best use a combination of opioids and other drugs to manage pain in dental patients. National discussions have been expanding, too.

Dr. Paul Moore, a dentist and pharmacologist at the University of Pittsburgh's School of Dental Medicine, studies the relative usefulness of ibuprofen and other NSAIDs in acute pain management, and worked on a recent update of the American Dental Association's prescribing guidelines for opioids. It was the national group's first update on the topic in a decade, Moore says.

The effort to get dentists and dental students to be wiser prescribers recently became personal for Moore. Among the more than 3,000 overdose deaths in Pennsylvania last year, one young man was Moore's nephew. The growing abuse of opioids by adolescents particularly concerns him.

"I'm very sensitive to the issue," he says.

Prescribing more pills than are needed to mitigate pain, Moore says, leaves extra pills or an unused prescription that can be sold or abused.

Dr. Elliot Hersh, a professor of pharmacology and oral surgery at the University of Pennsylvania School of Dental Medicine and a research collaborator of Moore's, says he regularly brings in a retired narcotics officer to address his class of dental students.

"I've been teaching my students that you have to be really, really careful with these drugs," he says. "That if you write too many of these prescriptions, for either good or bad intentions, either the state dental board and/or the DEA [Drug Enforcement Agency] is going to come down on you."

Hersh says one of the biggest hurdles in improving prescribing habits is countering — among his students, practicing dentists and patients — long-held misunderstandings about the pain-relieving power of less addictive drugs.

NSAIDs work at least as well as opioids, he says; they just haven't received as much hype, because they're available over the counter.

"A lot of the lay public believes if they're available over the counter, they're weak and they don't work," Hersh says.

Hatzell is 23 and has been in recovery for his opioid addiction for three years now. He says one of the most terrifying thoughts he faces as he navigates his recovery is that he might need surgery one day, and again need pain medication.

These days, whenever he goes to a dentist or doctor, he makes it a point to say right up front that he cannot take opioids.