Accessibility links
GOP Health Bill To Replace Obamacare Moving Through Congress : Shots - Health News Fending off attacks from the left and the right, House GOP leaders begin the process of amending their American Health Care Act, which would replace Obamacare. 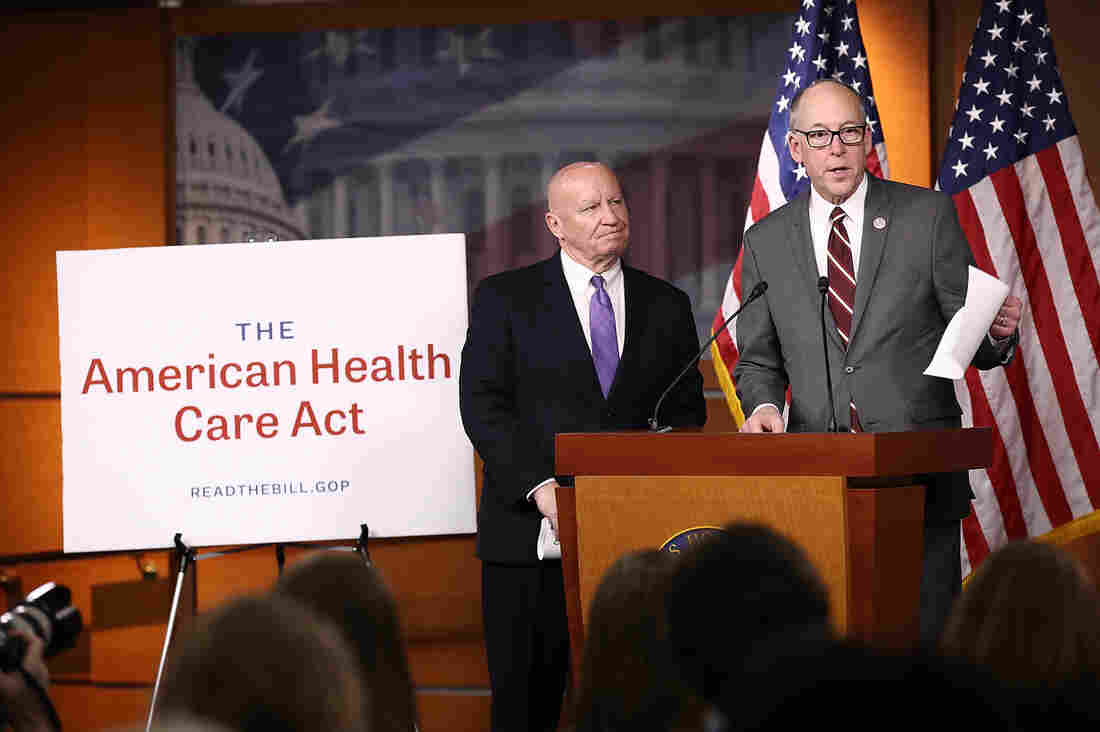 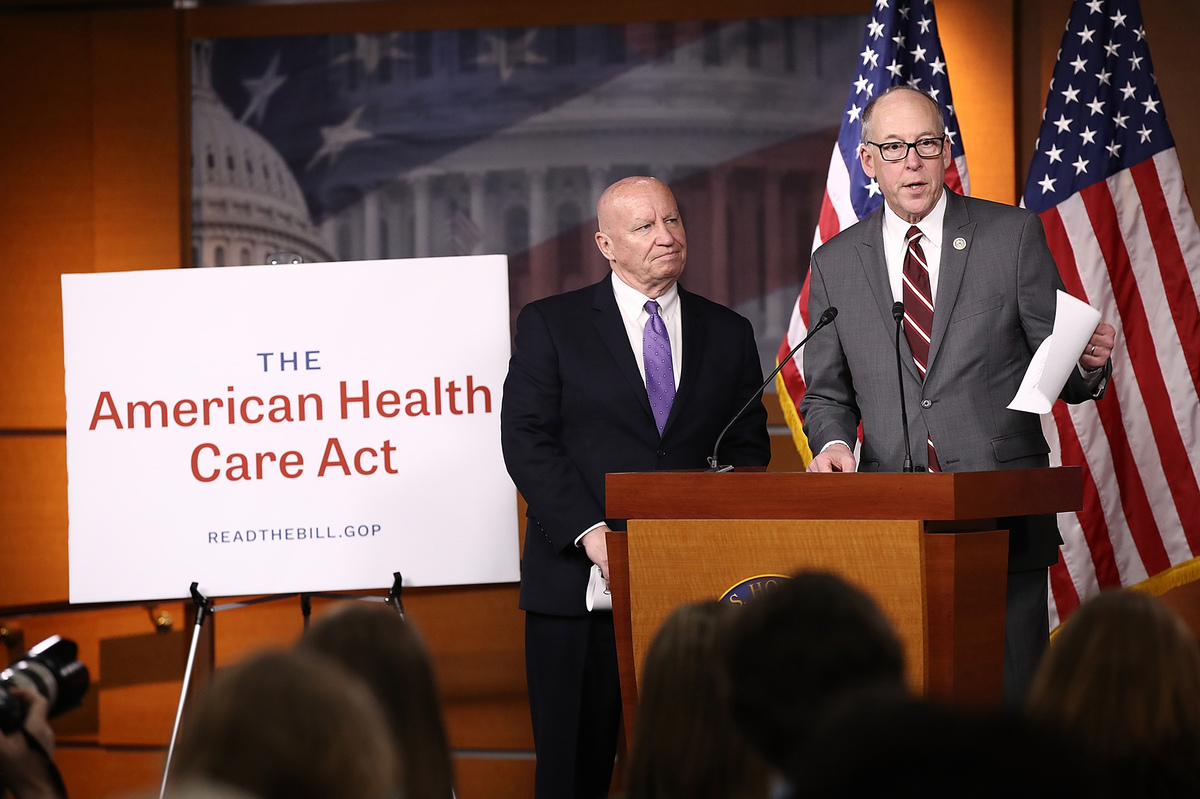 We tracked the action on Capitol Hill Wednesday as two House committees — Ways and Means, and Energy and Commerce, reviewed and amended the American Health Care Act. (It's the GOP plan to replace The Affordable Care Act.) Check in with us Thursday for more on the health law overhaul, including a live Tweetchat answering questions about the overhaul proposal, #ACAchat, from 12-1 pm ET.

5:30 p.m.: The House Ways and Means Committee has been voting on strict party lines to effectively kill amendments Democrats are offering to the GOP health bill for much of the afternoon.

Democrats are offering amendments they know won't pass to point out what they see as the flaws in the bill, like one by Rep. John Lewis of Georgia that would have required that the health bill not increase the number of the uninsured or force people to lose coverage.

Meanwhile, the House Energy and Commerce Committee has not yet started amendments.

3:50 p.m.: The committees broke for votes on the House floor more than an hour ago, and both sides of the aisle used the time to trade prebuttals in anticipation of the release of the Congressional Budget Office estimates of how much the GOP bill would cost. White House Press Secretary Sean Spicer raised concerns about whether CBO would score it well.

As Mediate put it:

Spicer then essentially questioned the legitimacy of the CBO, stating that they were "way off the last time," referring to their CBO review. When [reporter April] Ryan asked if cost matters, Spicer countered that it does but "if you're looking to the CBO for accuracy, you're looking in the wrong place."

House Democratic Leader Nancy Pelosi, Calif., reminded reporters that CBO Director Keith Hall was hired by Republicans, and formerly worked in the George W. Bush administration. "We shouldn't be having this markup without the CBO report," Pelosi told reporters at a press conference off the House floor.

1:20 p.m.: In case you've been wondering what we're doing here, we're following the markups in two committees, simultaneously, of the GOP health care bill. So what's a markup? It's when a committee debates, amends, and votes on legislation.

Rep. Sander Levin, D-Mich., criticized the timing of the markups, accusing Republicans of not waiting until the Congressional Budget Office has "scored" the GOP bill (i.e., estimated how much it will cost) because they don't want to know the answers to questions such as, how many people who have Obamacare would lose their insurance?

While it is unusual to hold a markup before CBO's numbers are in, it's not unheard of.

Thomas Barthold, chief of staff of the Joint Committee on Taxation, told the Ways and Means Committee that the CBO report will be released "early next week," NPR's Susan Davis reports.

12:26 p.m. Much of the criticism from Democrats has been how fast the GOP health bill has been thrown together and how little time they've had to absorb it, like this tweet from Rep. Joseph Crowley of New York.

Republicans' lack of transparency in this process is appalling.

But some Republicans with longer memories counter that in 2009, Obamacare went through Congress rather quickly, too. Here's what Brett Guthrie of Kentucky says.

For Obamacare, we saw bill less than 24 hrs before markup. The American Health Care Act is a #BetterWay.

Currently, House Energy and Commerce Democrats are forcing the clerk to read the whole bill out loud, a process that is usually dispensed with in the interest of time. It's probably buying them some time to file their amendments.

Make no mistake, this is a deliberate strategy, notes Rebecca Adams of CQ.

12:01 p.m. After some back and forth between House Energy and Commerce Chairman Greg Walden, R-Ore., and ranking Democrat Frank Pallone, D-N.J., over when and how amendments should be filed, Democrats say they have at least 100 of them, Kodjak reports.

Davis says the Ways and Means Committee could wrap at about 1 to 2 a.m.

11:30 a.m. Over at the House Energy and Commerce Committee, things are humming along. Most Republicans have declined to give opening statements, but Democrats are all taking their opportunity to talk, although they've been limited to one minute each.

Rep. Jan Schakowsky, D-Ill., summed up her thoughts on the American Health Care Act this way: "You pay more, and you get less."

Rep. Debbie Dingell, D-Mich., invoked her husband, former Rep. John Dingell, and former Sen. Edward Kennedy, D-Mass. (who she said should have been president), as people who devoted their lives to health care for all. "We will not go down without a fight," she said.

But Rep. Earl "Buddy" Carter, R-Ga., defended the GOP American Health Care Act. Obamacare has left "little choice and a wealth of mandates," he said. "You should have the freedom and flexibility to choose the care you want."

Meanwhile, the American Medical Association and hospital groups have weighed in against the Republican bill, which largely replaces Obamacare with tax credits to help people buy insurance.

"We want to make sure that whatever comes out of this change really supports particularly those low-income Americans, who frankly don't have the resources to afford coverage," Chip Kahn, CEO of the Federation of American Hospitals, said Wednesday at the health insurance forum in Washington. Hospitals may be particularly concerned if low-income people can't afford insurance because then they are likely to show up in emergency rooms, driving up health costs.

11 a.m. House Ways and Means Chairman Kevin Brady, R-Texas, kicked off his committee markup today with a call to action: "As President Trump said in his address to Congress last week, 'Obamacare is collapsing,' and 'decisive action must be taken to protect all Americans.' This morning, we will answer President Trump's call to action, and we will send a clear message to all who are hurting because of this law. That message is: Relief is on the way."

But the Democratic ranking member, Rep. Richard Neal of Massachusetts, called the bill "bad policy and the markup "bad process." "Is it health care, or is it a tax bill?" he asked. He later answered himself: "It's a tax giveaway to the wealthy," he said, referring to the tax cuts in the bill aimed at higher-income people and the proposed increase in the amounts people are allowed to include in health savings accounts. (HSA participation tends to skew wealthy.)

Meanwhile, the U.S. Conference of Mayors has weighed in, saying the nation's mayors are "very concerned that the new bill has been issued without knowing how much it will cost or how many people it will cover."

Rep. Lloyd Doggett, a conservative Democrat from Texas, also poked at the bill's lack of financial estimates from the official Congressional Budget Office: " 'Trust me, it will be great' is not a plan."

10:30 a.m. Good morning. Today we're going to keep you regularly updated on the status of the American Health Care Act, the GOP plan to replace Obama's health law. The bill was released Monday night and is being reviewed and potentially amended by two House committees Wednesday — Ways and Means, and Energy and Commerce.

"People need relief from Obamacare now more than ever," says House Speaker Paul Ryan, R-Wis., making the case at a news conference Wednesday morning before the committees began their work. "One out of every three counties in America is left with just one insurer," he said.

The Republican bill has faced criticism from all sides, including conservative Republicans who say it will cost too much, Democrats who say it will cut too much to help people keep their health care, and observers who are skeptical that it will fulfill the goals the GOP has set for itself.

Ryan dismissed the criticism and questions about the party's ability to push the legislation through: "We're going through the inevitable growing pains of an opposition party. ... That's all the more reason we have to do what we said we'd do," he added, which was to repeal and replace the Affordable Care Act, also known as Obamacare.

NPR's Susan Davis reports that the Ways and Means Committee is not expecting to entertain any amendments from Republicans, which may streamline the process over there.

NPR's Alison Kodjak says there was a long line of people waiting to get into the Energy and Commerce Committee hearing room, and reporters brought snacks in anticipation of a long day.

With reports from NPR's Susan Davis and Alison Kodjak