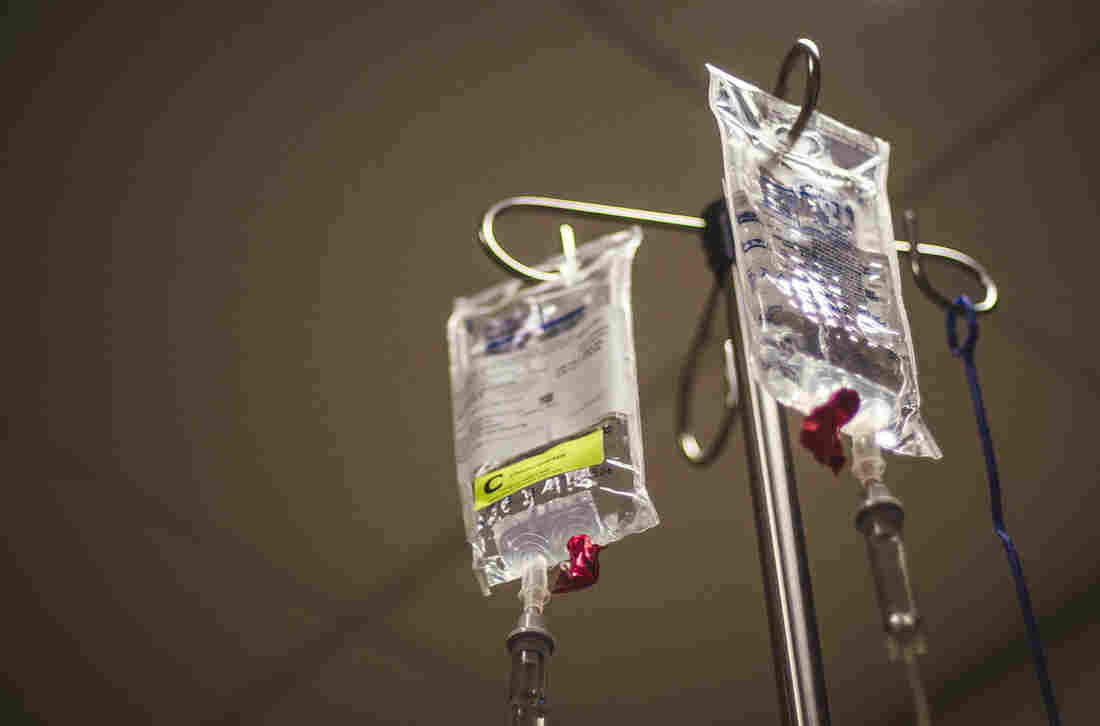 Sometimes fast-acting chemotherapy can help slow an aggressive cancer — and give the slower-acting immunotherapies a chance to work. UIG Platinum/UIG via Getty Images hide caption 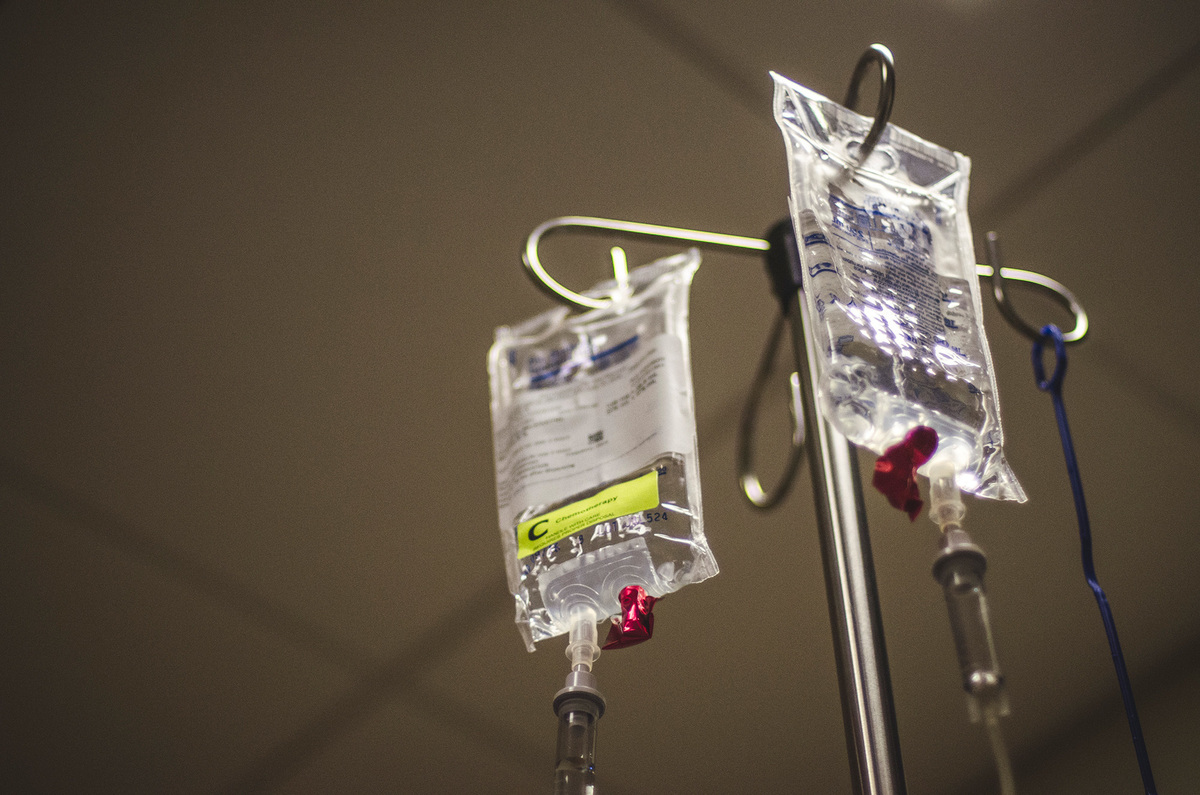 Sometimes fast-acting chemotherapy can help slow an aggressive cancer — and give the slower-acting immunotherapies a chance to work.

Chemotherapy remains one of the mainstays of cancer treatment, but these harsh drugs are slowly being edged aside in medical research, as new treatments, like immunotherapy, grab the spotlight.

Still, this is not the end of the road for chemotherapy. For one thing, doctors are coming to realize that some of these drugs are useful for more than just killing cancer cells.

Dr. Robert Comis, a professor and oncologist at Drexel University, had the first inkling of this phenomenon 30 years ago, after he ran a test involving radiation therapy along with just two cycles of chemotherapy — far too few cycles to be truly effective. Even so, the patients did much better than he'd expected.

"The only explanation was there was this large effect that involved the whole body," says Comis, who also co-leads the ECOG-ACRIN Cancer Research Group in Philadelphia. Chemotherapy wasn't simply killing cancer cells, he realized; apparently it was stimulating the immune system, too.

And that meant these old-fashioned drugs could play a new role.

To be sure, chemotherapy is still used a lot for its ability to kill cancer cells, even in clinical trials that involve newer treatments like immunotherapy.

Sometimes, fast-acting chemotherapy can help slow an aggressive cancer, for instance, and give the slower-acting immunotherapy treatments a chance to work. Chemo is also sometimes paired with still-unproven treatments to improve their odds of success.

That was the case for 69-year-old Deborah Mazia, who ended up at the Johns Hopkins Bloomberg-Kimmel Institute in Baltimore after being diagnosed with breast cancer around Thanksgiving of last year.

The news was bad. Mazia's doctor told her that she had triple-negative breast cancer, a malignancy that tends to respond poorly to conventional treatment.

Mazia didn't hesitate. She enrolled in a study that combines a potent chemotherapy drug with either an immunotherapy agent or a placebo. She still doesn't know whether she's getting the experimental treatment or not.

"But I don't care," she says. "I'm excited, because this is where I think things are going research-wise, so I'm thrilled." 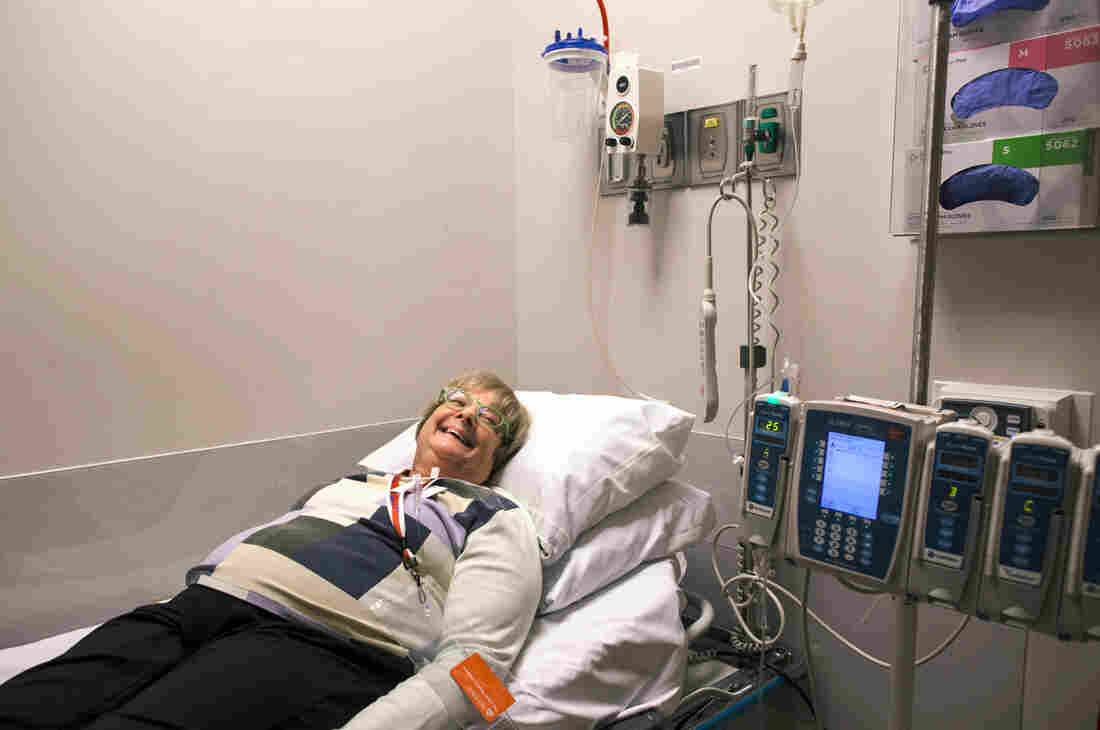 Deborah Mazia enrolled in a clinical trial after being diagnosed with triple-negative breast cancer last fall. She receives chemotherapy with either an immunotherapy agent or a placebo. Even though she doesn't know which one she's getting, she says she's thrilled to be a part of the study. Meredith Rizzo/NPR hide caption 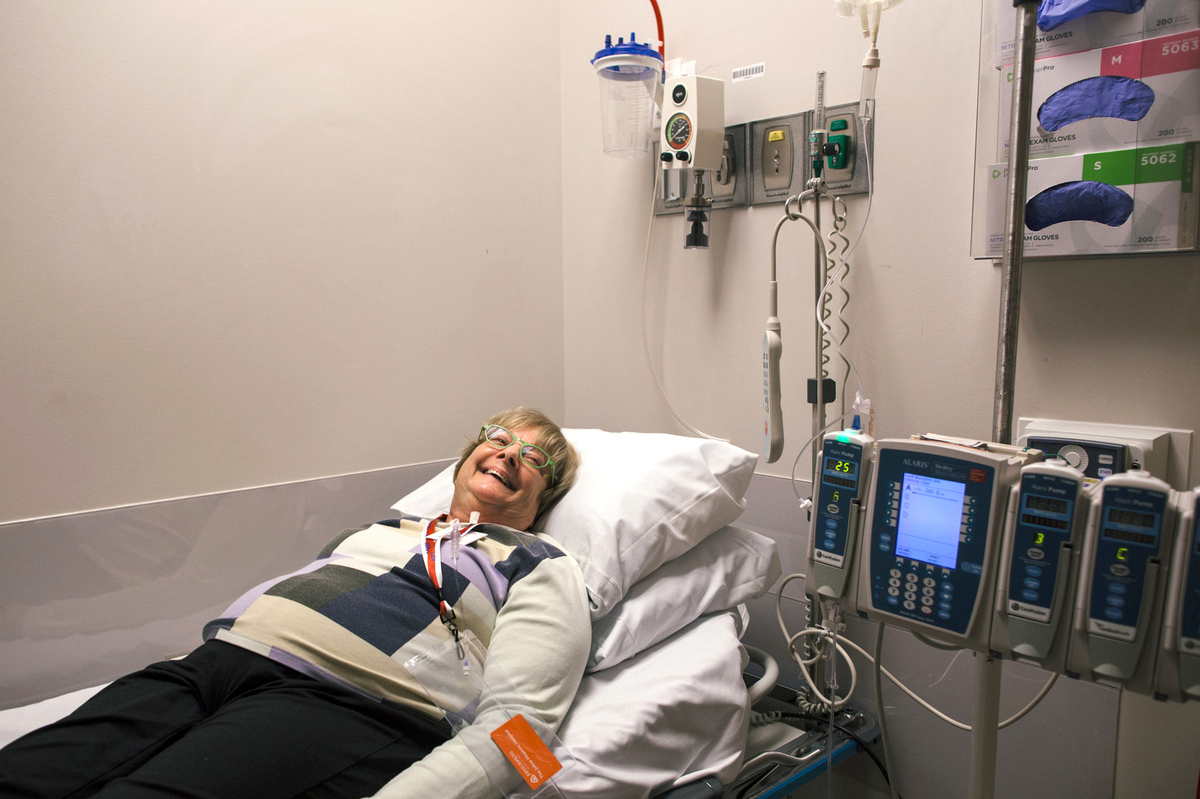 Deborah Mazia enrolled in a clinical trial after being diagnosed with triple-negative breast cancer last fall. She receives chemotherapy with either an immunotherapy agent or a placebo. Even though she doesn't know which one she's getting, she says she's thrilled to be a part of the study.

Immunotherapy sometimes produces dramatic results, but most of the time it doesn't work. So for a clinical trial like this, it makes sense to give standard chemotherapy along with the experimental treatment.

Dr. Leisha Emens, the oncologist running the study at Hopkins, says this is just one way she continues to use chemotherapy in clinical trials. She and her colleagues are also exploring an underappreciated role of chemotherapy — its ability to directly affect the immune system.

"In fact, it can either help or hurt the immune response to cancer," Emens says. She's interested in the helpful part, of course. For instance, certain chemotherapy drugs can kill a type of T-cell that makes cancers more resistant to treatment.

It also appears that after chemotherapy kills cancer cells, the debris that's left can sometimes stimulate an immune reaction. That leftover material is like a vaccine, in that it trains the immune system to recognize and attack remaining cancer cells.

And in some cases, Emens says, doctors can use lower doses of these highly toxic and often unpleasant drugs to harness the immune system. That interplay is an active area of research, she says.

The National Cancer Institute is focusing research dollars on that very issue, as it phases out traditional studies that involve only chemotherapy drugs. For decades, the institute has been funding research to find new combinations and doses, and made incremental improvements in cancer treatments. But those studies are disappearing.

Dr. Elad Sharon at the NCI says there's been a natural shift, instead, toward the next frontier of cancer treatment — so-called targeted therapies. Unlike chemotherapy, these targeted drugs don't blindly kill fast-growing cells, but instead home in on specific vulnerabilities within malignant cells. Immunotherapy is one type of targeted therapy.

"That's something that has really captured the imagination of the field," Sharon says. As time goes on, he says, "definitely we're seeing more and more of these targeted agents become the standard that people expect to receive."

But this is hardly the end of the road for traditional chemo.

"I think there are some diseases where chemotherapy has really been very effective, and has led to significant cures," Sharon says. It's "probably going to be very hard for any targeted agents to beat them."

Comis agrees. "We're in a transition state right now where the types of available treatments are changing," he says. "But we can't lose sight of the fact that cytotoxic chemotherapy has cured many, many patients."

And there are still ways to make these old standby drugs more effective, Comis says, sometimes by using them in combination.

"We just completed a study which showed that, in metastatic prostate cancer, the addition of a chemotherapy drug, God forbid, increased survival by 18 months in the highest risk groups," he says. "Eighteen months!"

That's much better than the improvements reported for most targeted treatments. In an ideal world, highly toxic chemo would give way altogether to gentler and more effective medicines for patients like Deborah Mazia. But Comis, for one, doesn't see that day coming anytime soon.