Accessibility links
Microbe Hunter Turned Astronaut Plies Her Trade In Space : Shots - Health News Meet Kate Rubins, a virus-hunter turned astronaut. When she sequenced DNA in space for the first time, she opened the door to a new era in space biology. 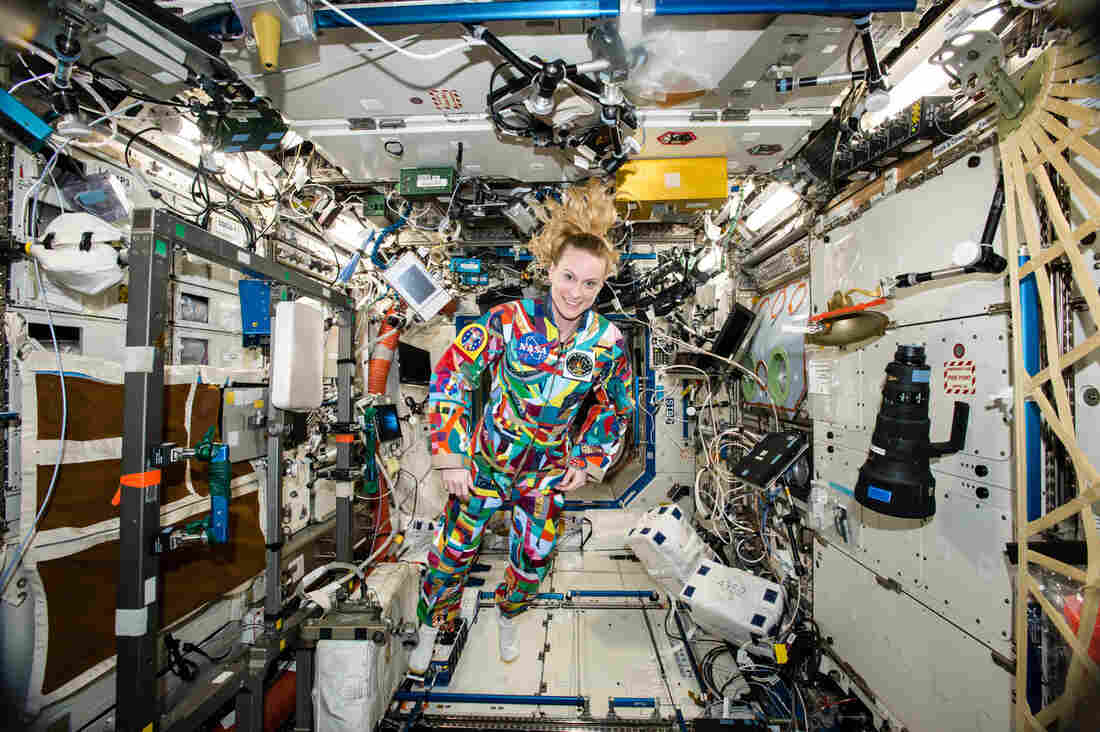 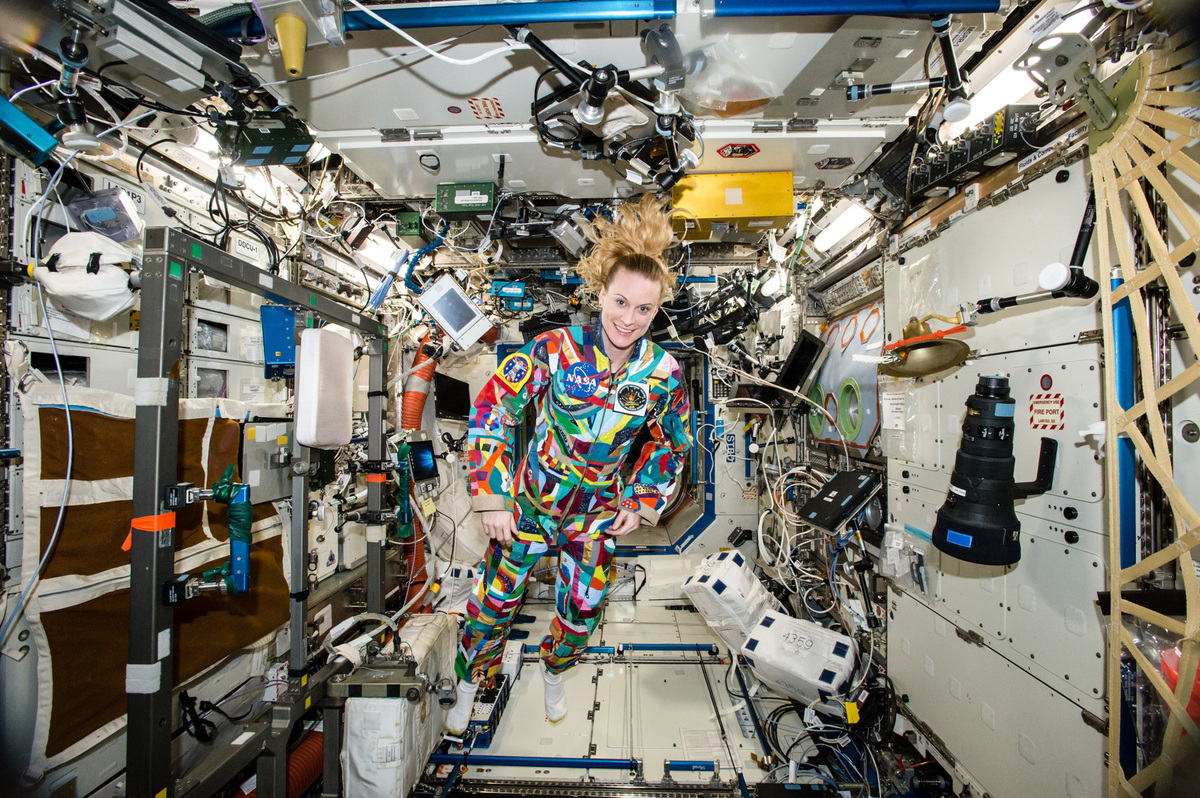 A few months ago, at her office in Houston, Kate Rubins was feeling weird.

She was dizzy, she says — "staggering around like a 2-year-old who had just learned to walk." She was constantly looking at her desk to make sure the objects on top weren't floating away.

Rubins wasn't going nuts. She was just readjusting to Earth after living without gravity for four months, hundreds of miles above the planet's surface.

Floating around up there, with blood rushing to her head like she was hanging upside-down on monkey bars, had been disorienting at first, though she eventually learned to move around using all four limbs. 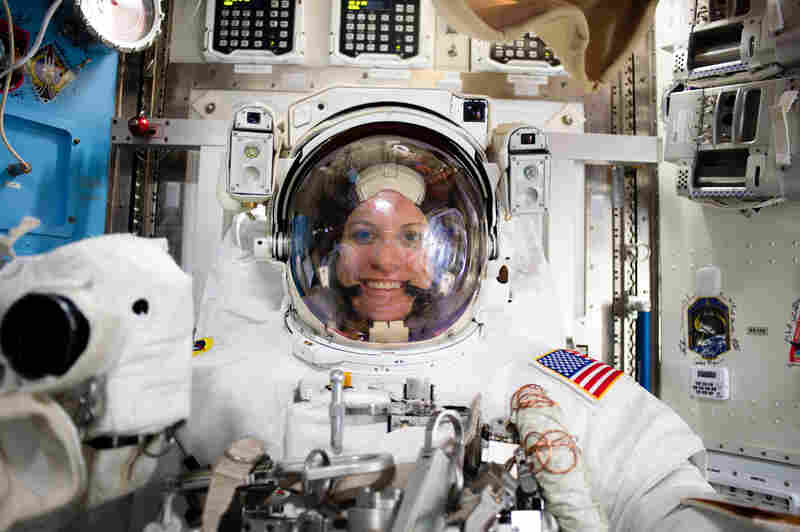 Rubins donned a spacesuit to install equipment on the outside of the International Space Station. NASA Johnson/Flickr hide caption 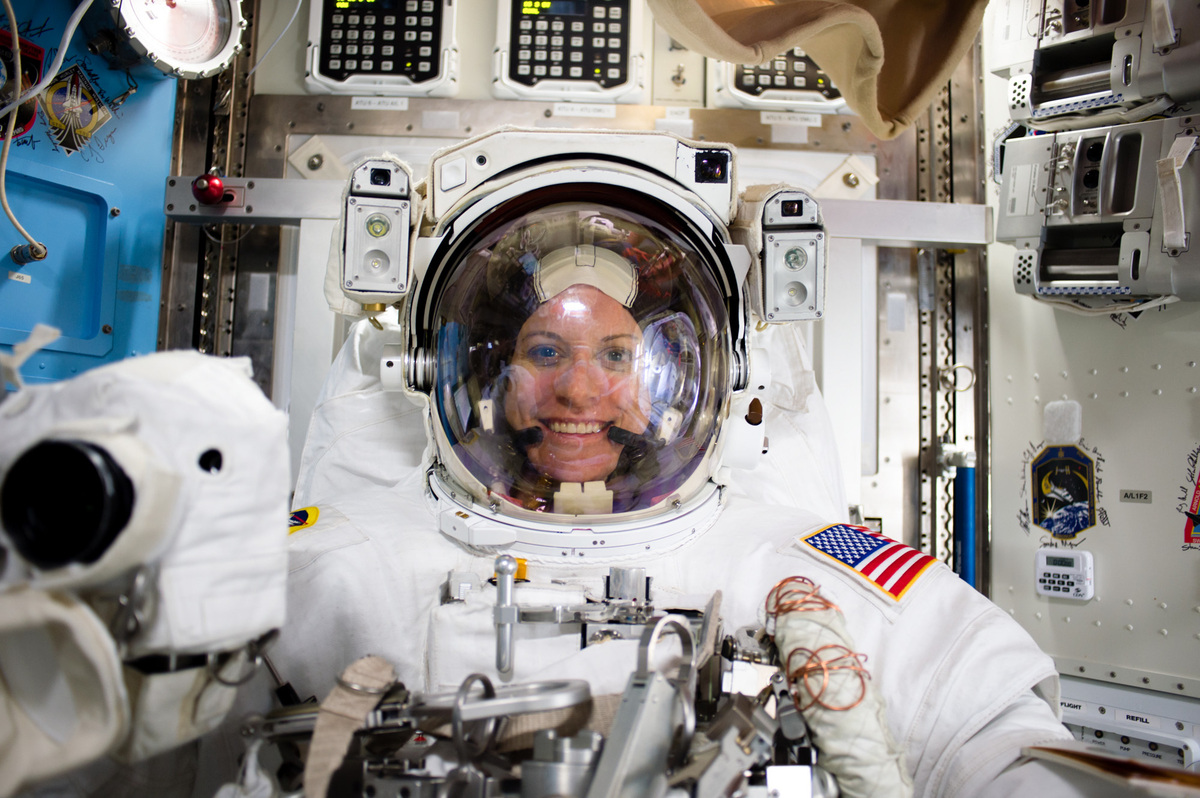 Rubins donned a spacesuit to install equipment on the outside of the International Space Station.

Coming back to Earth's gravity at the end of October was even more disorienting.

But Rubins is used to drastic transitions. Oddly enough, her journey to space had started years before, in central Africa.

"If you put your finger on a map in the middle of Africa, that's about where our field site was located," says Rubins, a microbiologist as well as an astronaut.

It was 2007, and an airplane touching down on a grass runway in the Democratic Republic of the Congo had brought Rubins and her colleagues to study a nasty outbreak of monkey pox in a remote village. She'd already spent time studying HIV, Ebola and smallpox in the lab.

This time the airplane wouldn't be back for six weeks.

Rubins didn't know it at the time, but that remote expedition gave her experience she'd eventually draw on during a much bigger journey — to outer space.

After the work in Africa, Rubins returned to Cambridge, Mass., and a fellowship at the Whitehead Institute for Biomedical Research, where she spent a lot of time writing grants.

All that paperwork was "mind-numbing," Rubins says. Just to get a break, a colleague suggested they try filling out a different sort of application — to become NASA astronauts.

"So, I found the application online," Rubins says, and filled it out on a lark. "I'll take this chance," she figured, "and maybe it'll be a good story someday of how I applied to be an astronaut."

A few months later, she got a call from Houston asking her to come down for an interview.

Rubins doesn't fit the normal astronaut profile. Many start out as military pilots, engineers or doctors — not microbiologists studying viruses. But she got the job.

"There's been a lot of growth in people's interest in doing biological research on the space station," explains Julie Robinson, NASA's chief scientist for the International Space Station program. 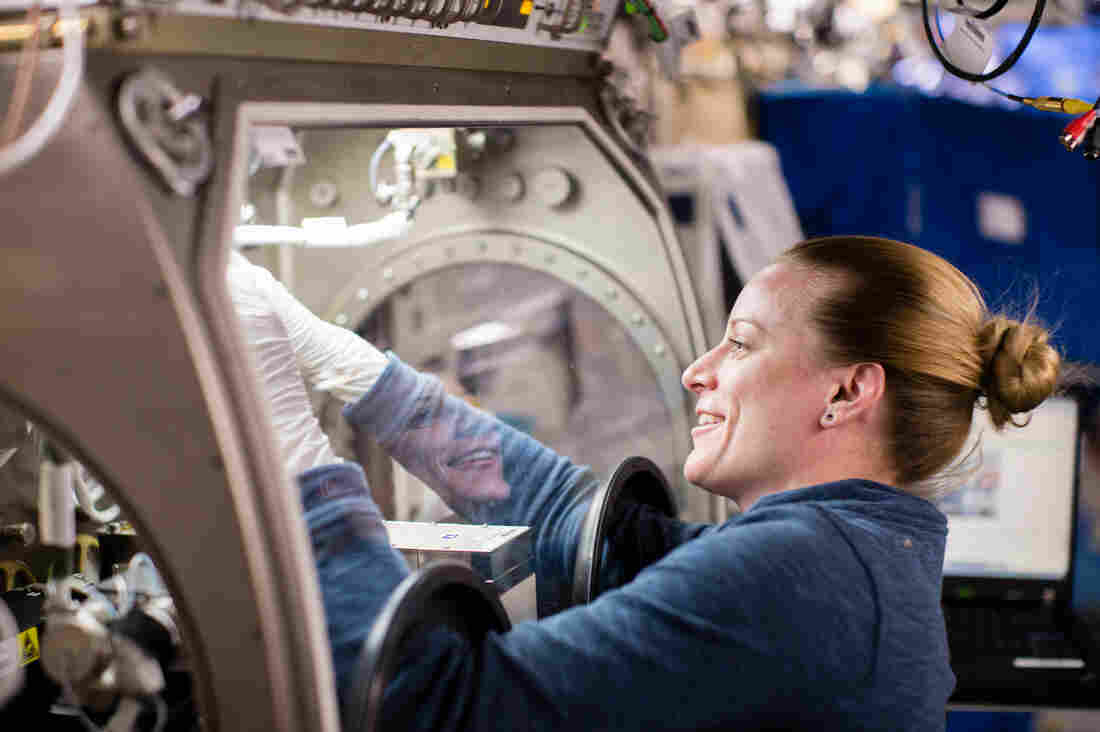 Rubins works on an experiment inside the station's glovebox. Prior research has suggested that the microgravity of space can change gene expression in certain bacteria and make them more virulent. NASA Johnson/Flickr hide caption 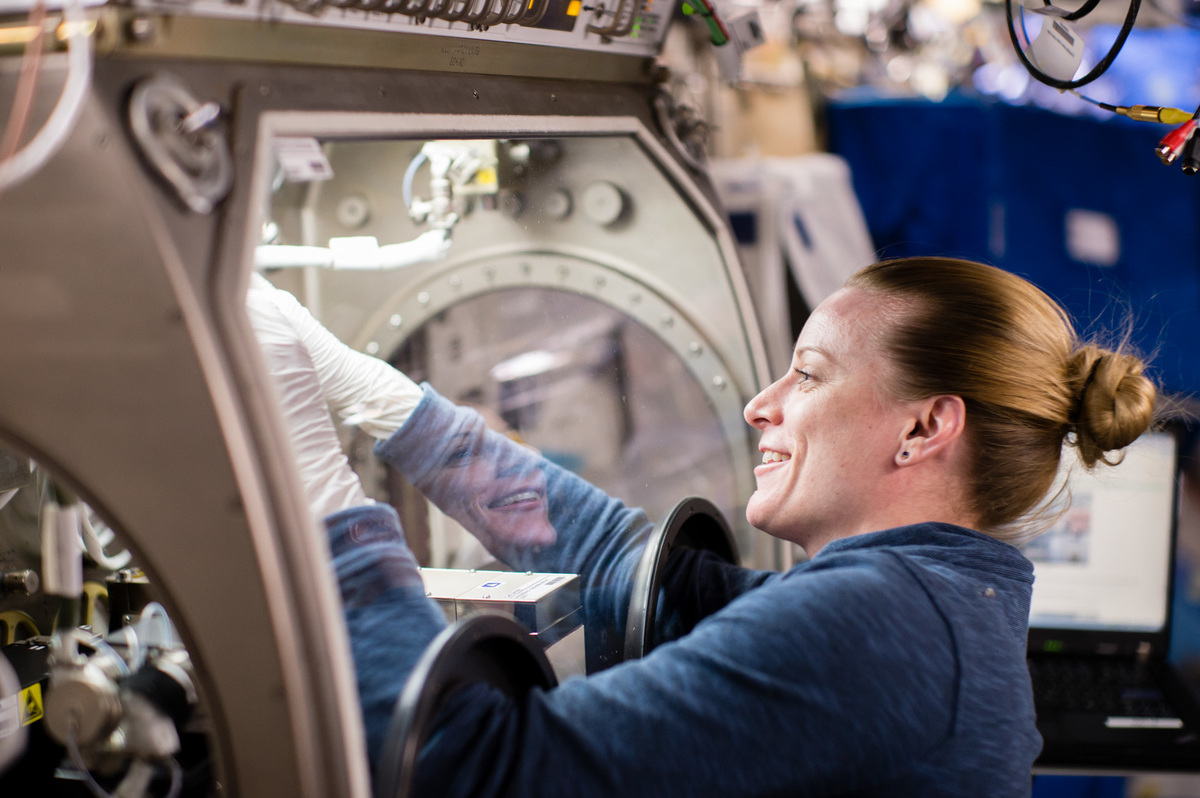 Rubins works on an experiment inside the station's glovebox. Prior research has suggested that the microgravity of space can change gene expression in certain bacteria and make them more virulent.

Before the shuttle program ended in 2011, Robinson says, "our commanders and our pilots had to be ready to land the shuttle, so that implied a really strong piloting [and] aerospace background, and that isn't as important now."

But once NASA's shuttle program ended and U.S. astronauts started hitching rides to space on Russian rockets, the focus for the American personnel shifted away from piloting skills — they no longer have to be counted on to land the shuttle.

"What's more important now is the time they spend in orbit, when they're carrying out a variety of experiments," says Robinson. "We can take what we learn in space to help us understand aging, disease processes, and even the basic biology of cells."

There's another reason it's useful to have molecular biologists and microbiologists in space: While there aren't viruses like Ebola or monkeypox on the space station (astronauts get quarantined before liftoff to make sure of that), space travel has never been sterile.

Take this moment from the Apollo 10 mission in 1969, for example, when three astronauts on board notice a loose turd floating through their spacecraft.

Back then, a few astronauts were sealed in a small capsule for a few days. But now there's the space station — a habitat the size of a six-bedroom house that circles the Earth, about 200 miles above our heads.

The station may have started out pristine, but its astronaut crews didn't.

"We cannot send up a sterile crew," says Sarah Castro-Wallace, a microbiologist at NASA Johnson Space Center. Astronauts need their gut bacteria and other friendly microbes to help keep them healthy.

And for 16 years straight, crew after crew has been sweating, pooping and puking inside the space station. The microbes they release tend to stick around, because the station is essentially sealed — like an airplane that never gets opened.

Today, it's teeming with non-human life. It has its own unique microbiome.

"Staphylococcus aureus we'll find once in a while; Staphylococcus epidermidis all the time," says Castro-Wallace, running down a list of resident space station microorganisms. There's also Staphylococcus hominis (usually harmless), Micrococcus luteus (lives in the mouth and throat), Burkholderia (common in soil; some types can cause lung infection), Sphingomonas (common in water, and rarely harmful), Penicillium (the fungus we find in bread mold) and Aspergillus (more mold), just to name a few.

Recently, an entire wall panel of the station turned green with mold.

"Imagine your shower curtain at its worst," says Castro-Wallace, pointing out that the wall of mold happened on the Russian side of the space station.

She's particularly interested in Staph. aureus; a strain of the bacterium that's resistant to multiple drugs is a particular problem in hospitals, and can turn something as simple as a paper cut dangerous.

"If it got into a cut, it could be life threatening," Castro-Wallace says.

It's become clear that scientists need to know what else is living up there, she says — particularly because research suggests that microgravity can change gene expression in certain bacteria and make them more virulent. (Castro-Wallace has found that Staph. aureus changes color in simulated microgravity, an indicator that the bacterium might act differently in space than on Earth.)

Right now, astronauts swab surfaces of the station and send samples back to Houston for identification. But that can take weeks or months.

It's a big reason why NASA hired Kate Rubins — and shot her into the sky.

She had 115 days to help set up a microbiology lab on the station. She drew on her earlier experience studying viruses — working quickly in a remote place, with minimal equipment.

"There's actually an incredible amount of parallels between working in central Congo in a remote, isolated village and doing research aboard the space station," Rubins says.

When I called her in space, while she was on the station last fall, Rubins had just gotten the lab up and running and was really excited about it. 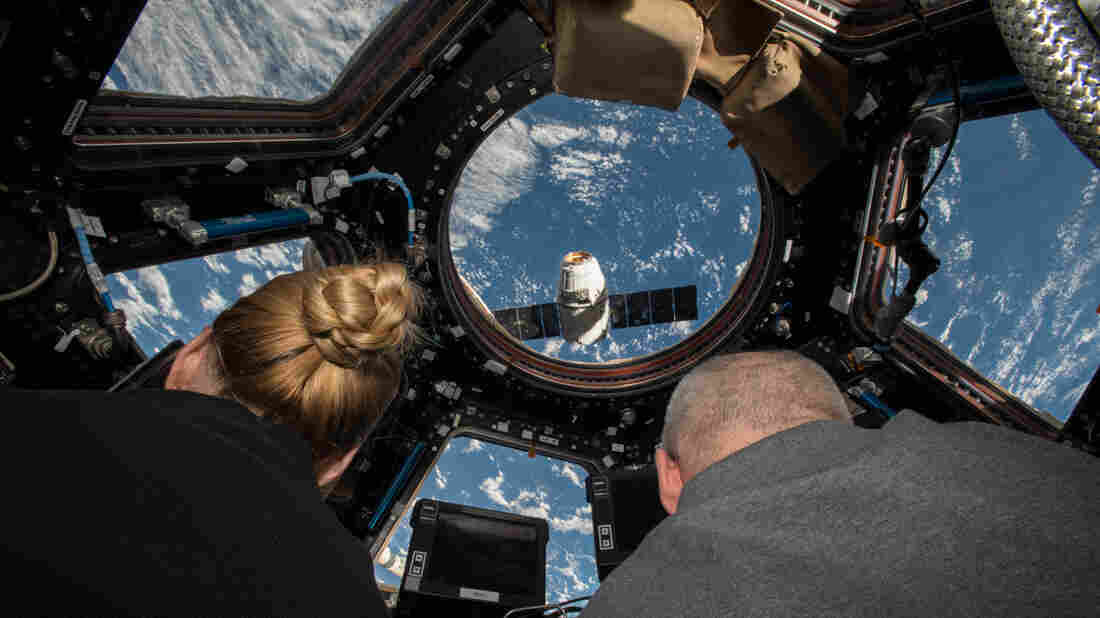 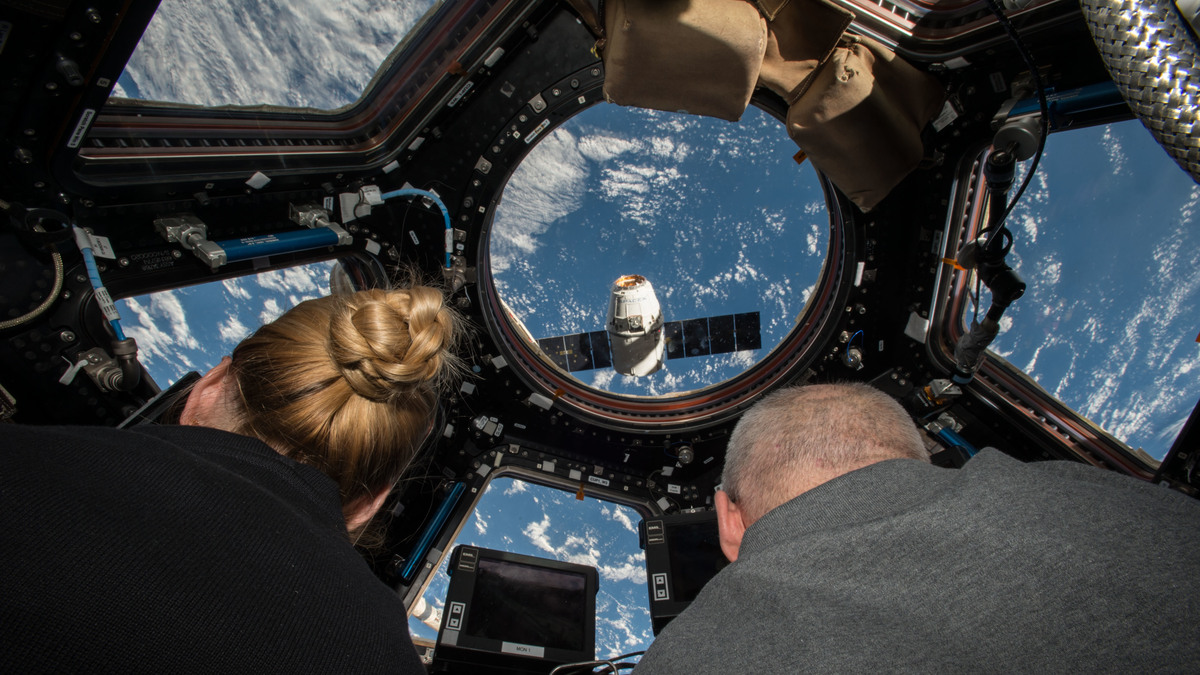 In July 2016, Rubins (left) and Jeff Williams (right), inside the International Space Station, maneuvered a supply spacecraft for docking.

"It's absolutely a working laboratory," she told me, as she floated around, describing the scene. "We have experiments all over the place."

Just weeks before, Rubins had sequenced DNA in space — the first time anyone had ever done that. The fact that the technology worked in microgravity showed that, in the near future, it should be possible to swab a moldy wall, for example, and immediately determine the type of mold.

She'd also grown stem cells into heart cells without gravity, and — peering through a microscope that she'd set up — watched them beat in unison.

Rubins has proved that it's possible to do molecular biology at least 200 miles beyond Earth — and maybe 200 million miles away, too.

"The world of sequencing and molecular biology has opened up to us on the space station," she says.

She and NASA's Julie Robinson are the kind of people who start sentences with the words "When we go to Mars," as if the journey to that planet is as inevitable as their next trip to the grocery store.

"It's the plan," says Robinson. "Absolutely," says Rubins, who is now Deputy Director of Human Health and Performance at Johnson Space Center.

When -- or if -- that expedition happens, Mars-based biology labs will be crucial resources for astronauts there. They'll need the tools of molecular biology to identify non-human life, so these emissaries from Earth can make sure that they aren't contaminating Mars with their own microbes, and to be able to detect any new life forms they might encounter. They'll also need the labs to diagnose sick space travelers, so they don't waste precious antibiotics or antivirals.

And, of course, they'll need the technology to figure out what's growing on their walls. Because one thing is for sure: Any human-built Mars habitat will soon become at least as gross as the International Space Station.