Accessibility links
Can A Cancer Drug Stop Dementia And Parkinson's? : Shots - Health News In a preliminary study, the cancer drug nilotinib seemed to help patients with Parkinson's and dementia. Now two larger and more rigorous studies of the drug are under way. 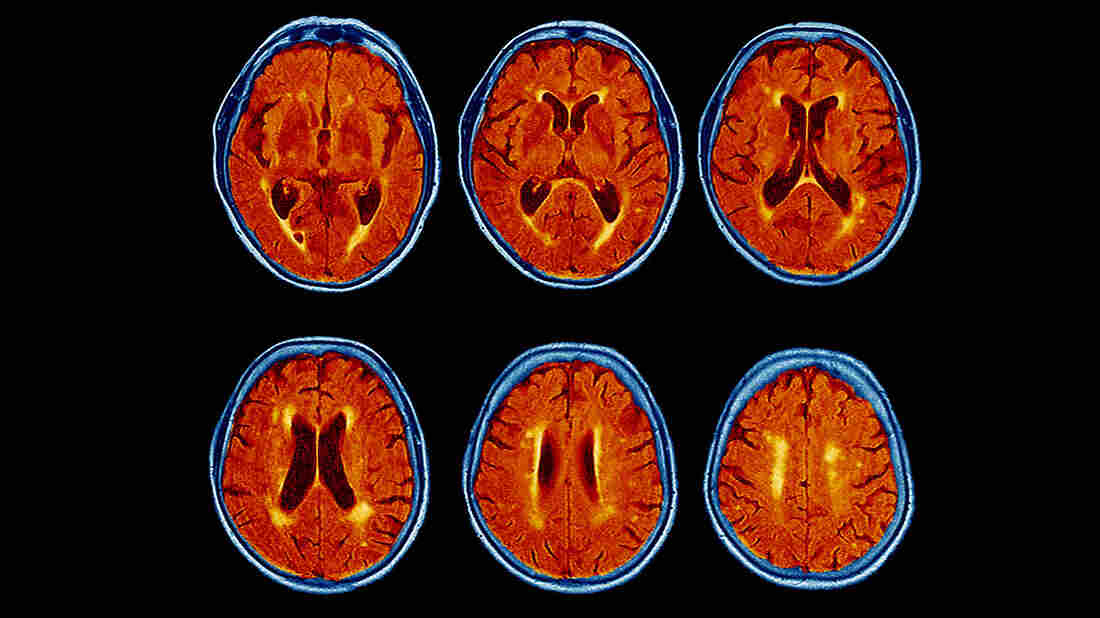 A colored magnetic resonance imaging (MRI) scans of the brain of a 76-year-old patient with dementia shows the brain has atrophied and the dark brown fluid-filled spaces have become enlarged. Zephyr/Science Source hide caption 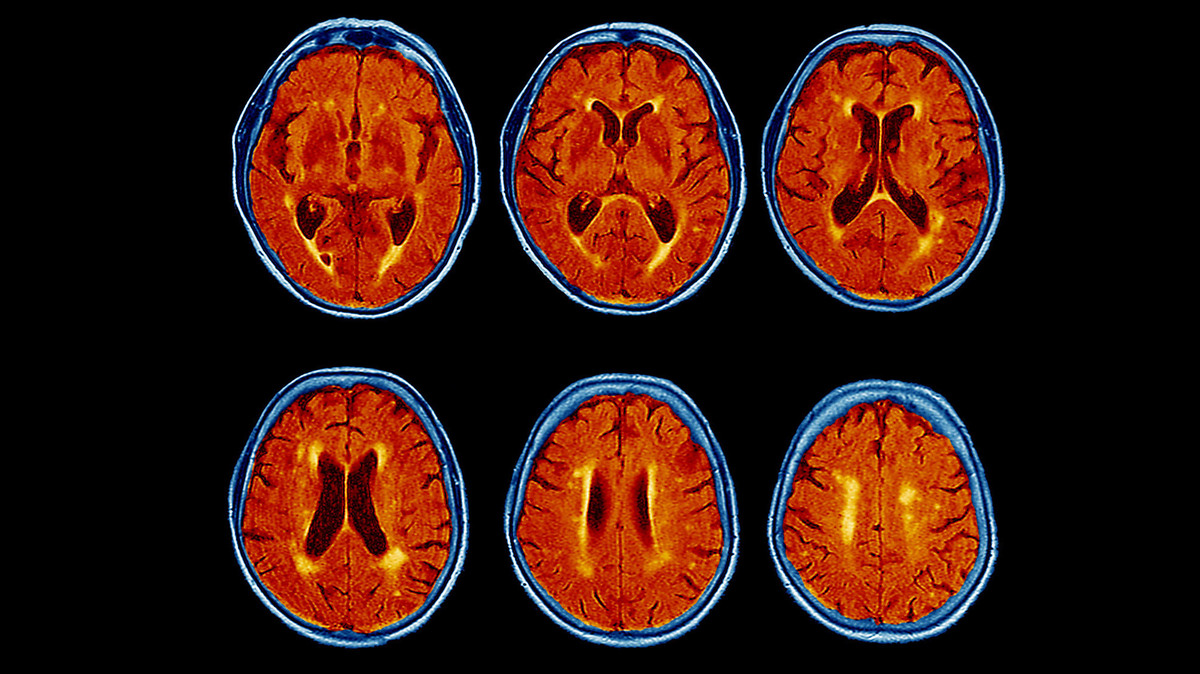 A colored magnetic resonance imaging (MRI) scans of the brain of a 76-year-old patient with dementia shows the brain has atrophied and the dark brown fluid-filled spaces have become enlarged.

Scientists are hoping that a single drug can treat two devastating brain diseases: Parkinson's and Alzheimer's.

The drug is nilotinib, which is approved to treat a form of leukemia.

In late 2015, researchers at Georgetown University Medical Center found that small doses of the drug appeared to help a handful of people with Parkinson's disease and a related form of dementia. They'd tried the unlikely treatment because they knew nilotinib triggered cells to get rid of faulty components — including the ones associated with several brain diseases.

Results of that preliminary study generated a lot of excitement because there is currently no treatment that can slow or halt the brain damage caused by either Parkinson's or Alzheimer's.

"Our phones were basically (ringing) off the hook," says Fernando Pagan, medical director of the translational neurotherapeutics program at Georgetown.

Many researchers were cautious, though. "It was such a small trial, there was no placebo control and it really wasn't designed to assess efficacy," says J. Paul Taylor, chair of the cell and molecular biology department at St. Jude Children's Research Hospital in Memphis.

So Georgetown is launching two larger and more rigorous trials of nilotinib, both designed with input from the Food and Drug Administration. One of the trials will enroll 75 patients with Parkinson's disease, the other will enroll 42 patients with Alzheimer's.

Can A Cancer Drug Reverse Parkinson's Disease And Dementia?

"This is going to help us identify what might have been a placebo effect and what is truly the effect of the medication," Pagan says.

Nilotinib seems to work by eliminating toxic proteins that build up in the brains of people with Parkinson's and Alzheimer's. The drug activates a mechanism in brain cells that acts like a sort of garbage disposal, Pagan says.

"Our drug goes into the cells to turn on that garbage disposal mechanism," Pagan says. "And if we're able to degrade these proteins, we could potentially stop the progression of this disorder."

The primary goal of the studies is to learn whether this powerful cancer drug is safe enough for patients with brain diseases. But the new studies should also provide better evidence about whether the drug really works.

That possibility attracts patients like Jonathan Lessin, a former anesthesiologist in the Washington D.C. area. Lessin was diagnosed with Parkinson's 14 years ago, when he was just 38.

Parkinson's gradually kills off brain cells that control movement. And for a decade after his diagnosis, drugs and a treatment called deep brain stimulation allowed Lessin to continue working. He retired several years ago, when his symptoms progressed to the point that he feared he might not be able to provide first-rate care for his patients.

Since then, the disease has caused Lessin's speech to become slightly slurred. "It's slowly progressing," he says. "My balance is getting worse and worse. I'm falling more and more during the day. But I'm still able to do things like rock climb and ski and bike."

Lessin has been able to stay active thanks to treatments that help control symptoms. But the disease continues to eat away areas of his brain.

So Lessin was excited to learn about the Georgetown study, which held the tantalizing prospect of a drug that just might slow or halt that process.

"I've always been riding the leading edge of treatment," Lessin says. "And I just figured I'd go for it."

As a former physician, Lessin fully understands the limitations of the earlier trial, and the risks of taking a powerful cancer drug. But as someone with Parkinson's, he sees an opportunity.

There's good reason for patients with Parkinson's, Alzheimer's and other neurodegenerative diseases to be optimistic these days, Taylor says.

Drugs like nilotinib are coming along because years of research have provided a much better understanding of how these damage the brain, he says. "Now we're in the payoff phase."

Taylor still isn't sure whether nilotinib will live up to its early promise. But, he says, "If the results of this trial don't turn out to be as exciting as the very tiny trial suggested, I would not get too pessimistic because there are other developments that are in the wings."

The Georgetown studies are enrolling patients now and will take more than a year to complete.