Accessibility links
Vasectomies Easier To Take During March Madness, Ads Promise : Shots - Health News Some urologists use March Madness as an opportunity to market vasectomy services, offering men the excuse to sit on the sofa for three days to watch college basketball while they recover. 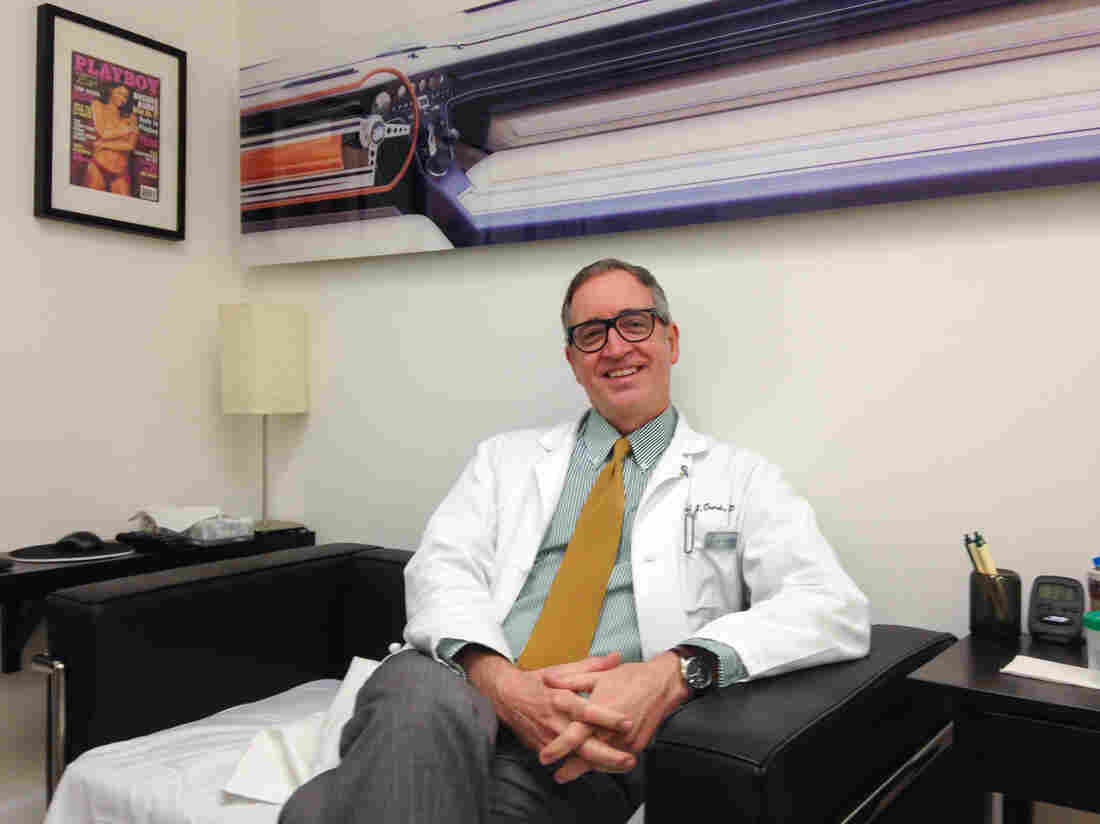 Dr. Paul Turek, a urologist with clinics in San Francisco and Beverly Hills, says one group of friends who got vasectomies together, during the NCAA spring basketball tournament, seemed to recover more quickly than usual, and require fewer pain pills. April Dembosky/KQED hide caption 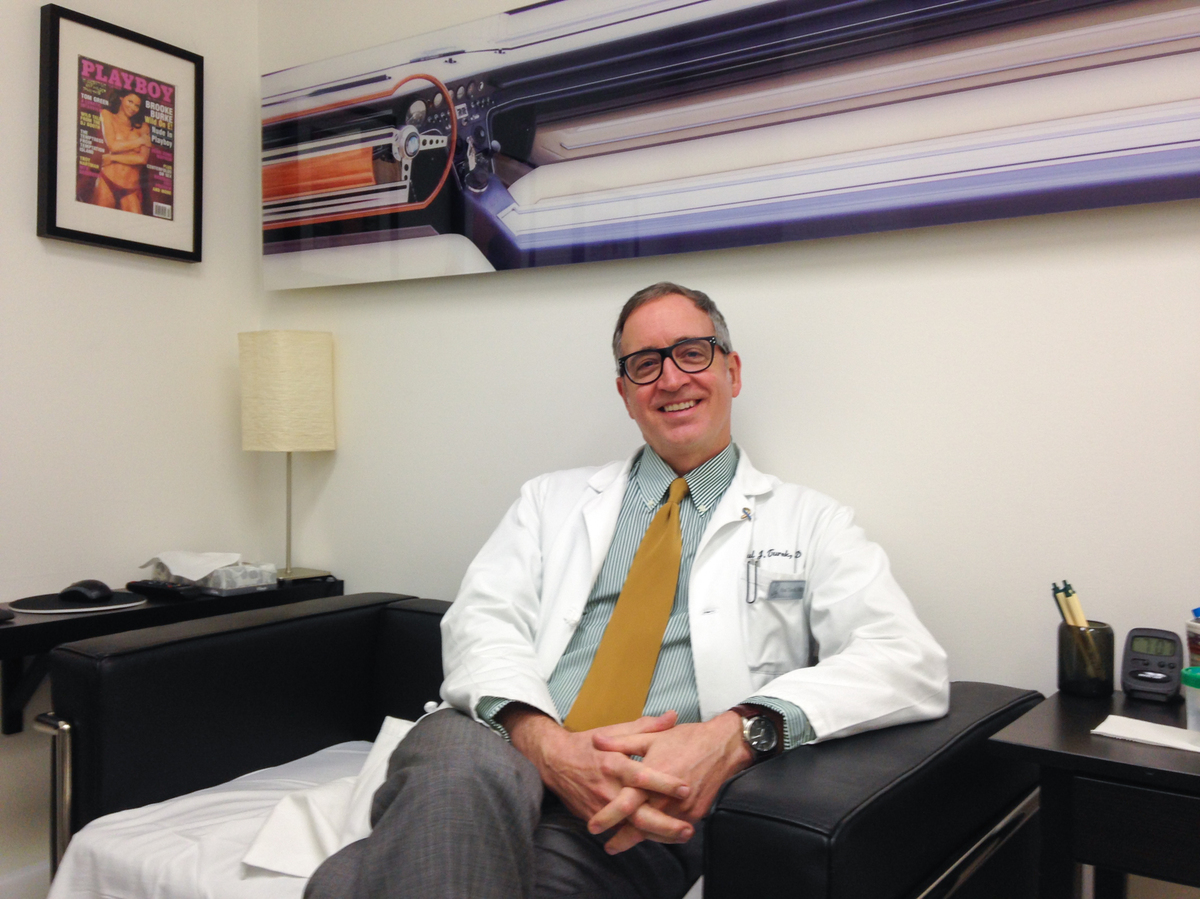 Dr. Paul Turek, a urologist with clinics in San Francisco and Beverly Hills, says one group of friends who got vasectomies together, during the NCAA spring basketball tournament, seemed to recover more quickly than usual, and require fewer pain pills.

Doctors say it all started eight years ago, when a urology clinic in Oregon ran an ad promoting the benefits of scheduling a vasectomy in March.

"You go in for a little snip, snip and come out with doctor's orders to sit back and watch nonstop basketball," the voice-over promises. "If you miss out on this, you'll end up recovering during a weekend marathon of Desperate Housewives!"

Copycat ads followed. Now a sports radio show in Washington, D.C., has an annual Vasectomy Madness contest, where the prize is a free vasectomy.

Here's how it works: Three guys come on the air to make their cases for getting snipped. The announcers ruthlessly roast them, and then listeners vote on their favorite.

"All right, let's bring in our next contestant," a host says. "I believe it's Abe from Warrenton, Va. So tell us your story. Why are you here?"

"Another one — surprise! Due in July," Abe says. "I was shopping after the third for a vasectomy, and like a dope, dragged my feet."

"My wife and I have had enough," he pleads. "We need help to stop the flow."

And then there's Charles.

Procrastination can be so common with the "Big V" that it takes a panel of sports jocks offering a free procedure for some guys to finally let a doctor take a scalpel to their nether regions.

That may be one reason vasectomy rates are low: About 5 percent of women rely on their partner's vasectomy for contraception, unchanged from a decade ago. The CDC's National Survey of Family Growth compares that to 20 percent of women who have had a sterilization procedure, even though women's surgery is more invasive and more expensive.

"Men are culturally the providers. It's hard for them to seek care," says Dr. Paul Turek, a California urologist. "They don't know how to be a patient."

Turek has clinics in San Francisco and Beverly Hills. He sees an uptick in vasectomy visits during March Madness, and he's also noticed more guys coming in together.

"One group came in from a tech company in a limousine," he says.

Last year, five college buddies scheduled a group vasectomy in March. They live all over the U.S. now, and one of them had an idea to reunite in San Francisco and undergo the outpatient procedure together.

"I gave 'em a deal," Turek says. "I closed the doors. We had sports TV on. They were having fun."

As each guy returned to the waiting room, he was greeted with fist bumps and high-fives. Then the men hobbled back to their hotel to bet on the games and yell at the television.

Turek made an interesting observation during that bro basketball weekend: The guys seemed to recover faster than his typical patients.

"They had no complaints," he says. "They were back at work sooner. They took fewer pain pills. It was the best anesthesia, having their buddies with them."

Turek gives all his vasectomy patients a certificate of honor for "uncommon bravery and meritorious performance."

There is another theory about why vasectomies aren't more popular: the cost. The Affordable Care Act requires insurers to cover contraceptives without charging out-of-pocket costs. But vasectomy wasn't included in the rule. The procedure costs about $500, but some doctors charge up to $1,000.

That's why Charles subjected himself to the free vasectomy contest at the D.C. radio station. His insurance covers a portion of the procedure, "but I'd still have to pay my deductible, which is, like, a thousand bucks."

Vasectomy was overlooked in Obamacare because, under the law, birth control was considered a women's health service.

"Right now the policy says to a couple: Your insurance will cover birth control without any out-of-pocket costs on your end, as long as it's the woman who's using it," says Adam Sonfield, senior policy manager at the Guttmacher Institute.

Last year, 12,000 people signed a petition asking regulators to cover vasectomy without cost sharing. Doctors' groups even drafted language to this effect to add to the regulations.

But when the Trump administration took over, it told the groups to stop trying, according to Aaron Hamlin, executive director of the Male Contraception Initiative.

"The birth control benefit has been under pretty much continual political attack since the ACA was enacted," says Sonfield.

The vasectomy battle is now moot, he added, because President Trump's health officials want to get rid of the contraceptive mandate altogether, even for women.

"They are very much in danger at the moment," Sonfield says.

So for now that leaves guys like Charles, Mike and Abe vying for a free March Madness vasectomy. The winner in the end?

Abe — one of the guys expecting his fourth child.

His prize comes with a catch, though. He has to let one of the sportscasters come to his appointment, to broadcast a "play-by-play."