Accessibility links
New Parents Get Baby Boxes To Encourage Safe Sleep : Shots - Health News The baby boxes that Finland gives to all new mothers are legendary. Now states in the U.S. are experimenting with them as a way to encourage safe sleep practices and reduce SIDS. 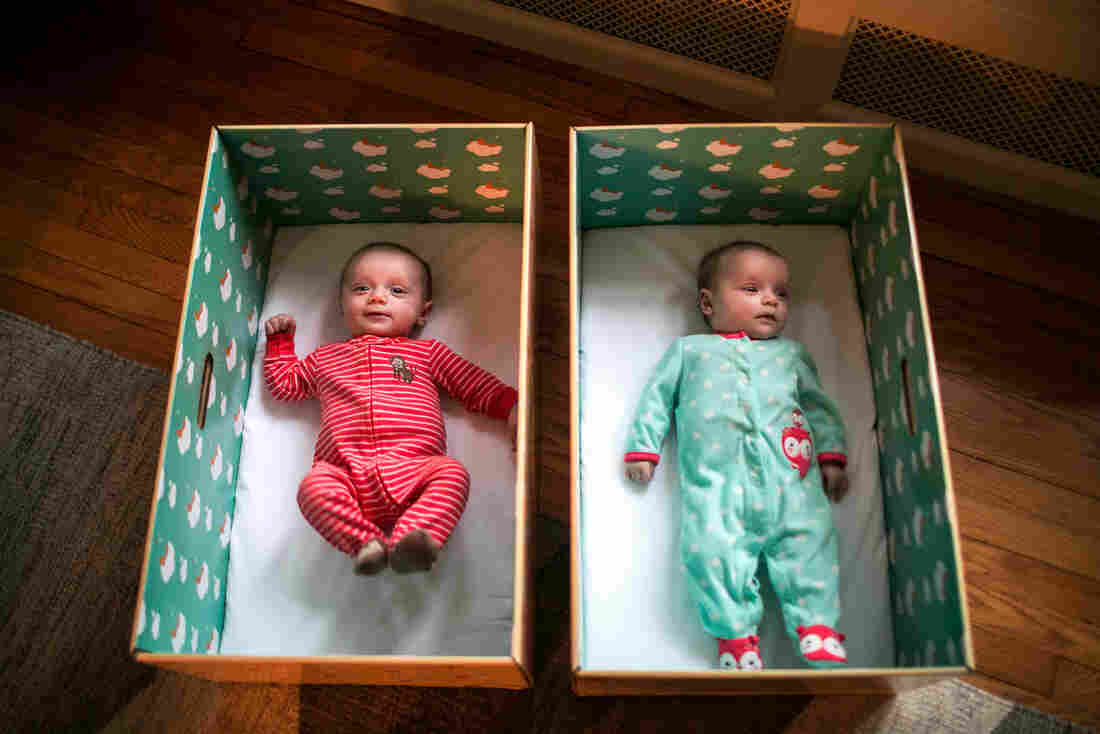 Twins Ryan and Nell Stimpert lie in their baby boxes at home in Cleveland. The cardboard boxes are safe and portable places for the babies to sleep. Maddie McGarvey for NPR hide caption 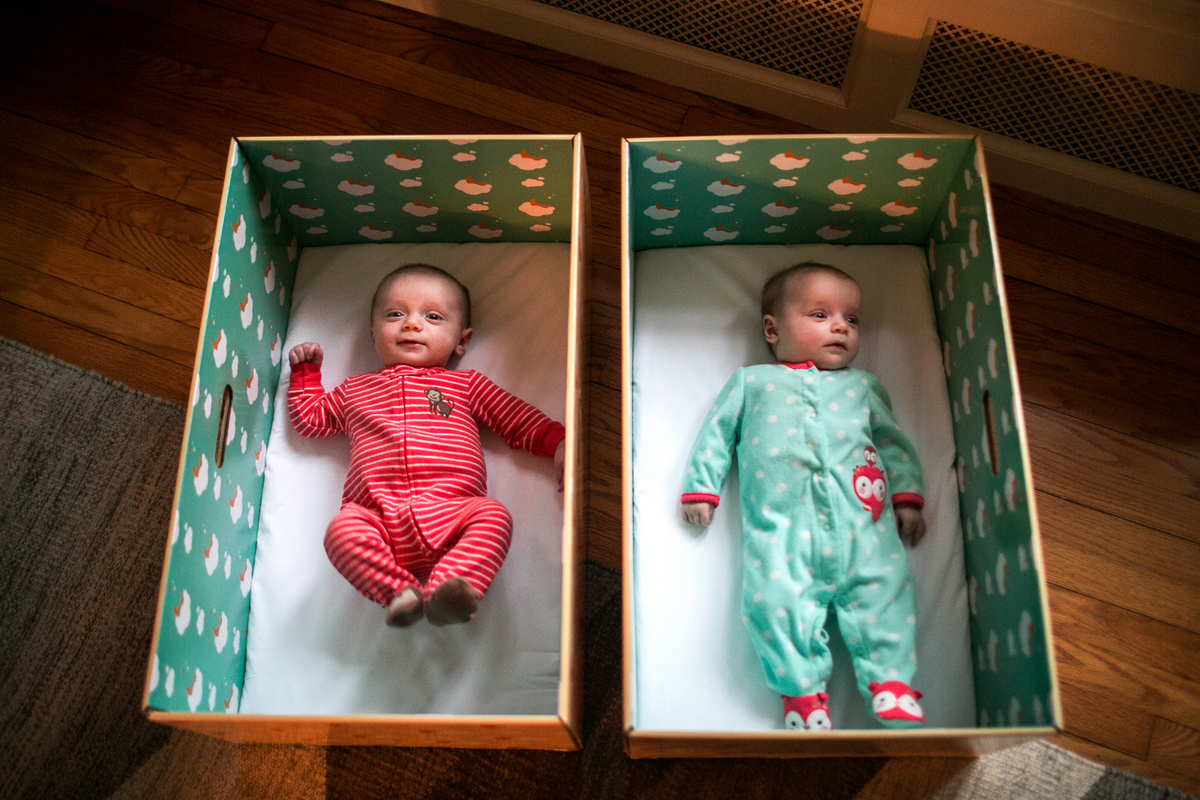 Twins Ryan and Nell Stimpert lie in their baby boxes at home in Cleveland. The cardboard boxes are safe and portable places for the babies to sleep.

For Jernica Quiñones, the reality of sudden infant death syndrome, or SIDS, hit close to home this year when a friend woke up on New Year's Day and discovered the lifeless body of her baby girl.

That's why Quiñones' 4-month-old son, Bless'n, has spent a lot of his life so far sleeping in a cardboard box.

The 33-year-old mother of five took part in a program in New Jersey that promotes safe sleep education through the distribution of "baby boxes" that double as bassinets.

"Some mothers can't buy a Pack-n-Play or a crib," Quiñones says. And that can lead to bed sharing, a risk factor for SIDS.

The program is a riff on Finland's well-known baby box, or maternity package, which the government gives to expectant mothers who get a prenatal checkup: It's the box, plus clothing, blankets and other supplies.

Now that Finnish model is making inroads in the U.S., but with a twist. Instead of being a prenatal incentive, it's being used to deliver a postpartum safe sleep message. 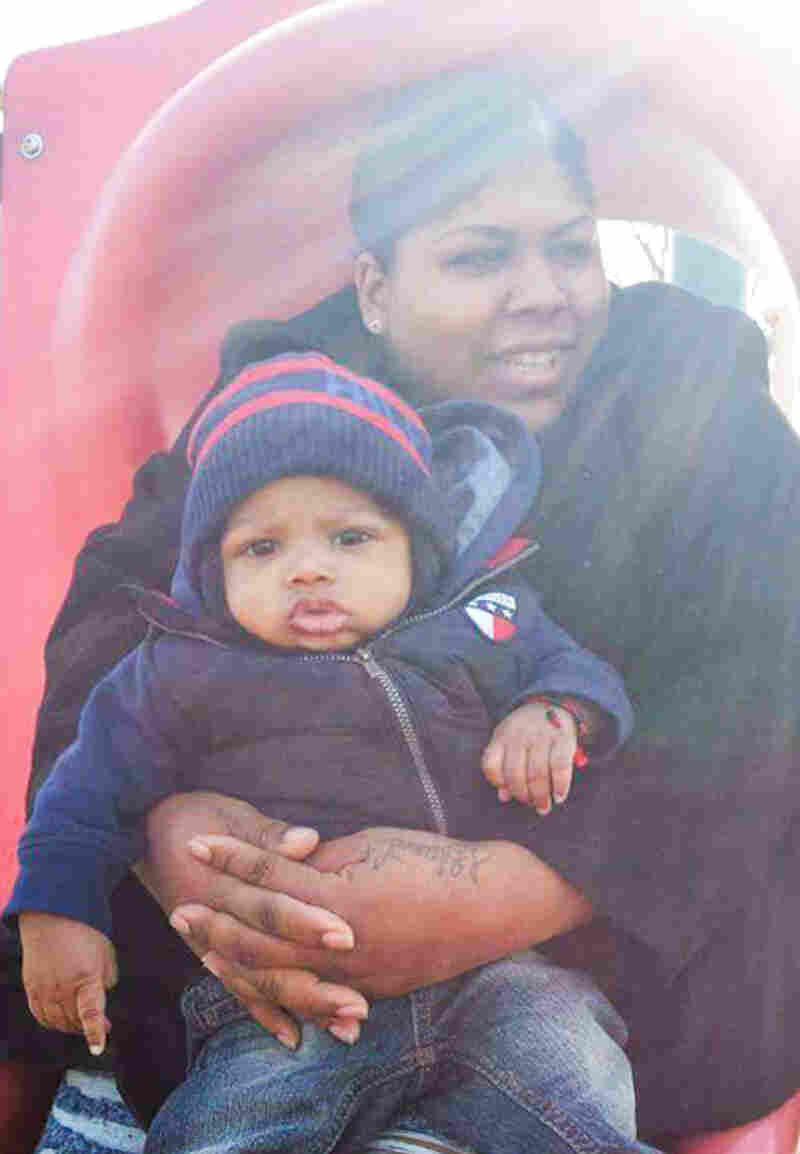 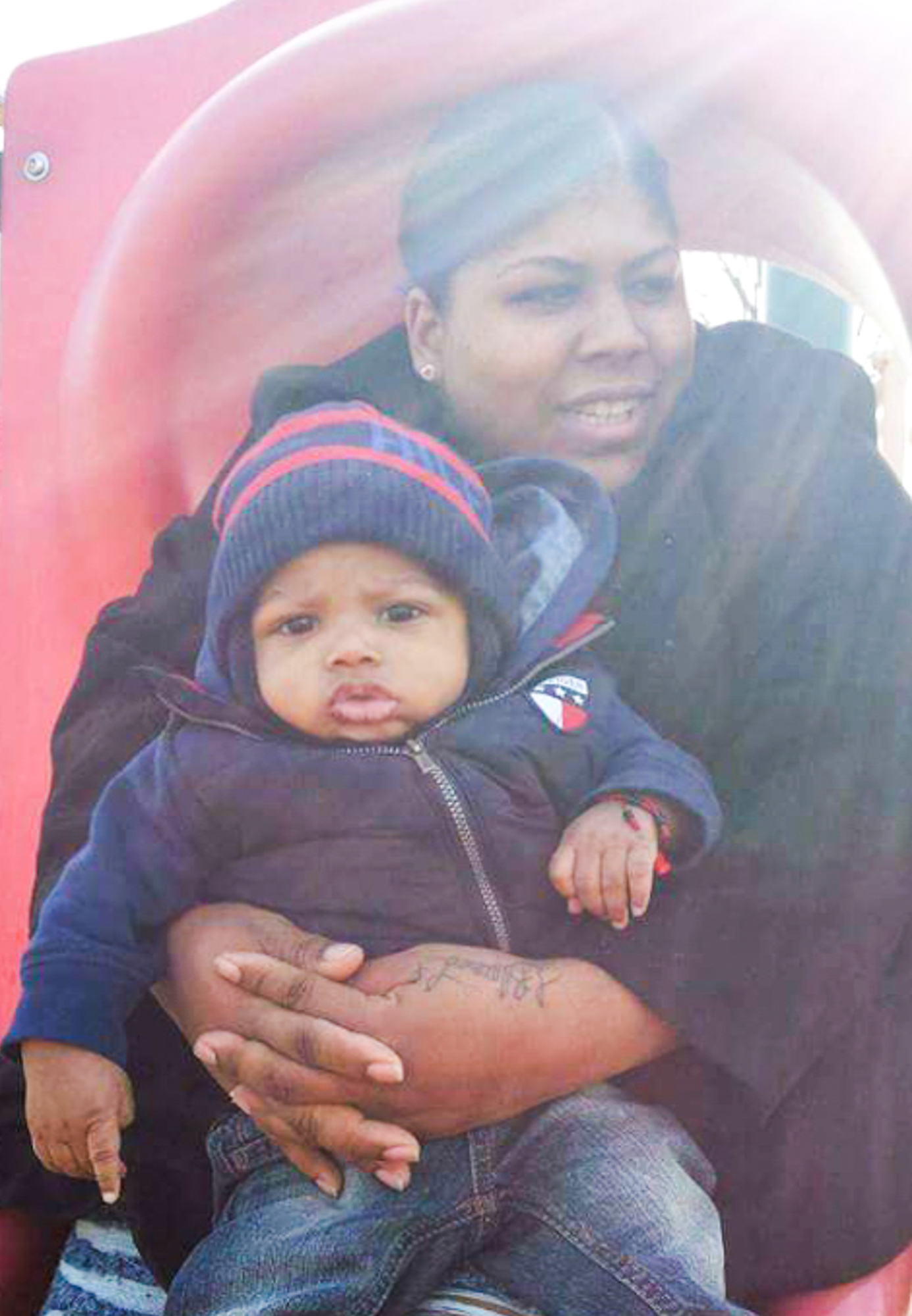 Jernica Quiñones and her son, Bless'n. Quiñones was one of the first people to receive a free baby box in New Jersey.

This week, Alabama will join Ohio and New Jersey in making free baby boxes available to the families of all newborns in the state. Parents watch online videos about SIDS and safe sleep and complete a short quiz. They can pick up a box at a local distribution center or have it mailed to them. The sturdy, portable box comes with a firm foam mattress and tight-fitting sheet; also included are breastfeeding accessories, a onesie, diapers and wipes.

New Jersey plans to distribute 105,000 boxes; Ohio, 140,000; Alabama, 60,000. The boxes are provided by the California-based Baby Box Co., which also helps produce the educational videos, hosted on its Babybox University website and tailored to local communities.

"The whole premise is that people like free things," says Dr. Kathryn McCans, chair of New Jersey's Child Fatality and Near Fatality Review Board, which is partnering with the Baby Box Co. for the New Jersey program. "It's about getting the information out there."

"Through education and awareness, people can make better choices and hopefully we can see fewer children dying," she says.

There are about 3,500 sudden unexpected infant deaths a year in the U.S. The rate dropped significantly after the launch of 1994's Back to Sleep campaign, which urged parents to put their babies to sleep on their back. But after a plateau, the rate has seen a slight uptick in recent years.

By comparison, Finland began its baby box program 80 years ago, when nearly one out of every 10 children in the country died before age 1. To qualify, women must get a health check before the end of their fourth month of pregnancy. Now, the country has one of the world's lowest infant mortality rates. 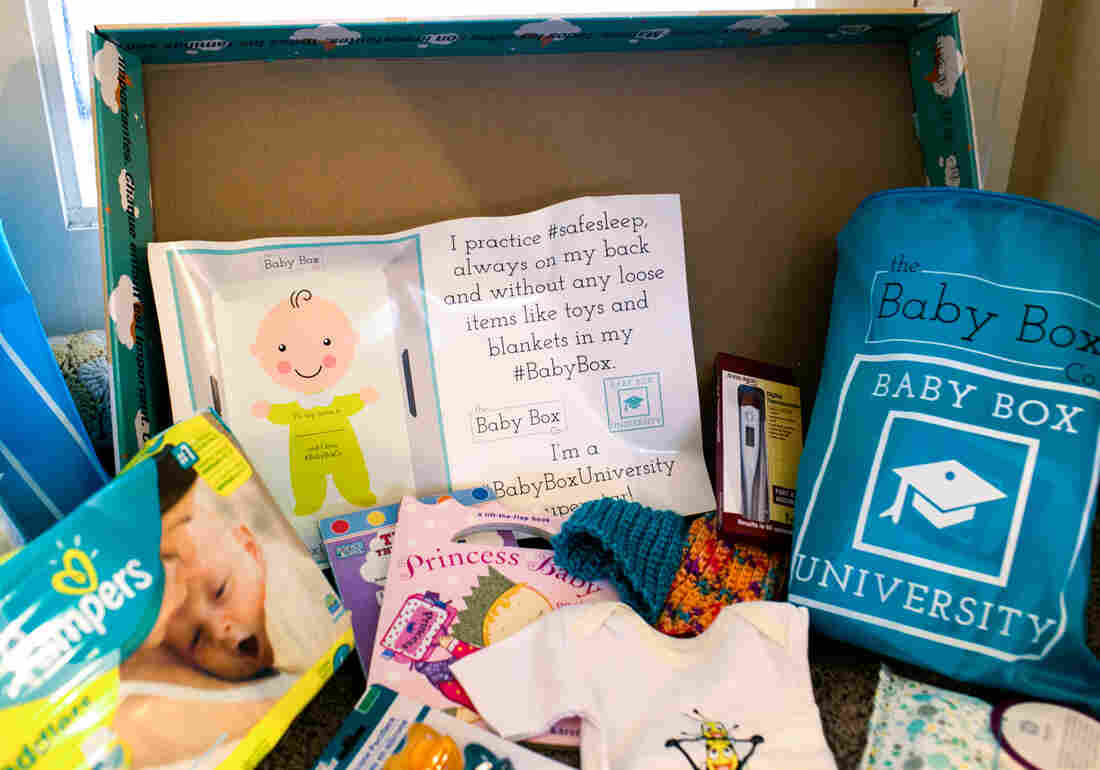 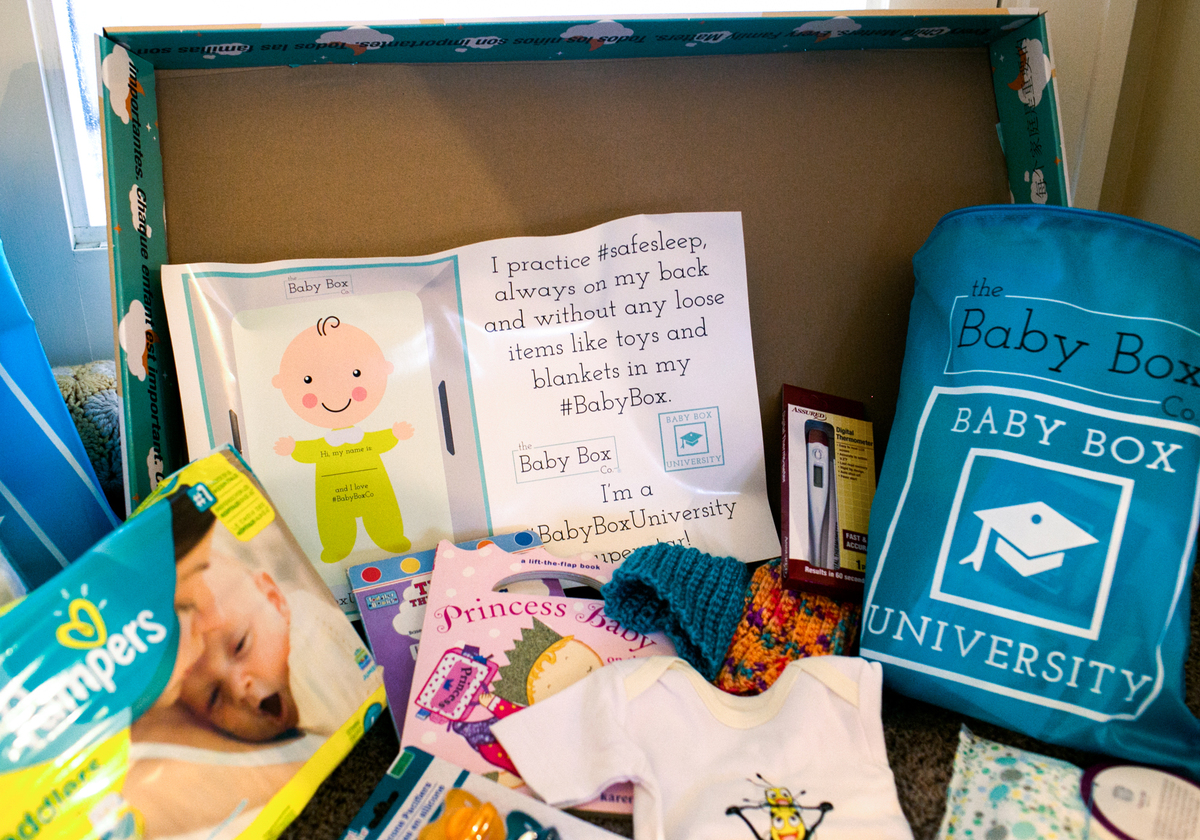 In the U.S., it's impossible to require pregnant women to get a prenatal checkup. Instead, the New Jersey and Ohio programs rely on educating new moms through videos.

With a running time of 15 to 20 minutes, the videos reflect the American Academy of Pediatrics safe sleep guidelines, which includes advice to put babies to sleep alone on a firm mattress, with no toys or soft bedding in the crib.

Kyle Stimpert, a mother of twins in Cleveland, received some of the first baby boxes in the Ohio program, which launched this month. She says she would have been a lot less anxious if she'd had them when her son and daughter came home from the hospital in December. "You don't have to research, you don't have to text a friend, you just know it's a safe place," the 36-year-old says.

In most cases, a baby box can be used for the first six months of life. The risk of SIDS is greatest between two and four months.

The Baby Box Co. says on its website that their boxes "meet or exceed all applicable tenets" of the Consumer Product Safety Commission. But the CPSC does not have standards for baby boxes. 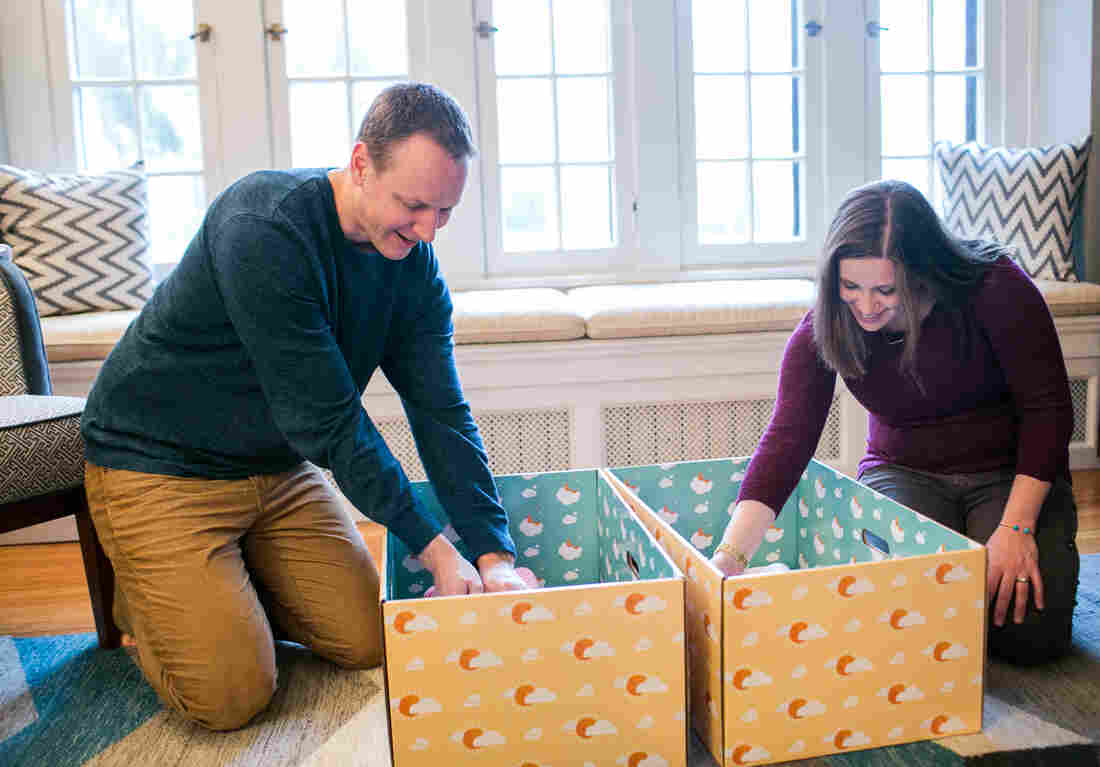 Dave and Kyle Stimpert check on Ryan and Nell. They received the free boxes after learning about preventing SIDS through safe sleep practices. Maddie McGarvey for NPR hide caption 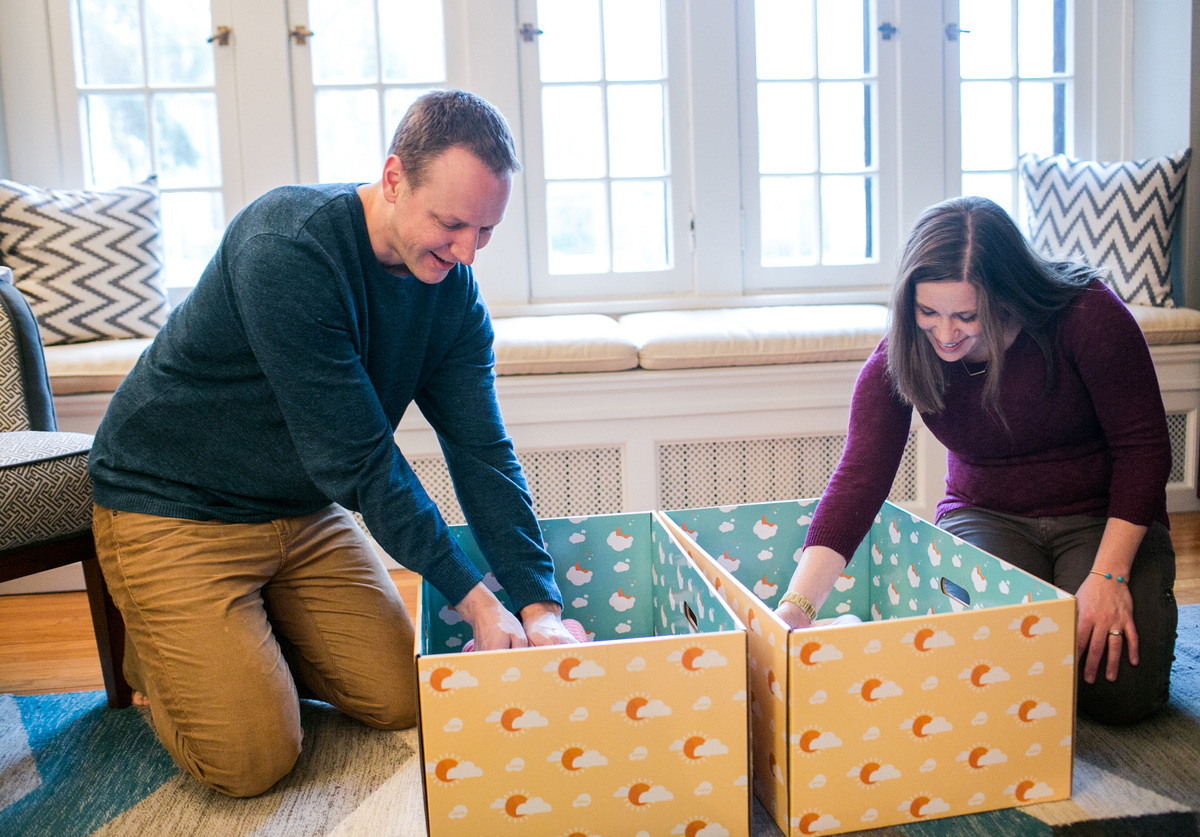 Dave and Kyle Stimpert check on Ryan and Nell. They received the free boxes after learning about preventing SIDS through safe sleep practices.

Dr. Rachel Moon, a SIDS researcher at the University of Virginia and chairman of the American Academy of Pediatrics' SIDS Task Force, cautions that cardboard boxes are not bassinets, which have firm frames with legs or other supports.

"The box companies want to do the right thing and want to make sure their products are safe," Moon says "But we're not quite there yet. There's still more testing that needs to be done."

It's a cool box, and a great hook for safe sleep education. But how effective is this approach?

People certainly are attracted by the free baby box. And the program has reached more people in less time than some of the state's other safe-sleep efforts, McCans says.

Ultimately, McCans says she doesn't care whether babies actually sleep in the boxes.

"I'm not wedded to the box itself. It's about the education," she says. And, she says, it's about making the boxes available to everyone so no one feels stigmatized.

Dr. Kristi Watterberg, chair of the American Academy of Pediatrics' committee on the fetus and newborn, applauds the effort but worries that the process — learning about the program, going online, watching the videos and taking a quiz — may be too overwhelming or complicated for the people who need the education the most.

"The people who can really benefit from this are those who don't have any clue what you need when you take a baby home," she says. "They don't have the social structure to support them. These are the moms who most need what's in that box and the box itself."

Watterberg also doesn't want to see videos take the place of prenatal care, which remains the most important factor for healthy babies.

A study underway at Temple University Hospital in Philadelphia, a city with one of the highest infant mortality rates in the U.S., may yield some answers.

In the study's first phase, mothers who delivered at the hospital received standard postpartum talks about SIDS, shaken baby syndrome and other topics. The hospital followed up with a phone call that included questions about risk factors for SIDS, such as bed sharing.

The results: Within 72 hours of leaving the hospital, 6.3 percent of mothers self-reported co-sleeping with their babies — just after they were told not to.

Those findings are lower than the national rate, which is 11.2 percent of parents co-sleeping with infants 7 months and younger, according to the National Infant Sleep Position Study.

"We identified the lack of a place for the baby to sleep as a risk factor for bed sharing," says Dr. Megan Heere, medical director of the well baby nursery at Temple University Hospital.

The study's second phase, which ended in November, introduced the baby box and a revamped educational component. Every mother had a one-on-one discussion exclusively about safe sleep with a specially trained nurse. The sessions lasted up to 45 minutes.

At discharge, new moms were given a baby box and taught how to use it. They also got a review of safe-sleep practices and watched a three-minute video provided by the Baby Box Co. The results are expected in May.

Heere hopes the baby box helps promote the cause of safe sleep, but she's skeptical about the videos.

"Videos can be on and nobody watches them," she says.

About a month after Quiñones, the New Jersey mom, watched the BabyBox University videos, she can quickly recall what she learned: That breastfeeding reduces the risk of SIDS, that you shouldn't use bumpers or put teddy bears in the crib. Though she's not a first-time mom, Quiñones says those facts were all new to her.

And word of the baby boxes has spread: Her sister and a friend have gotten them, too.

"Everyone wants a baby box," Quiñones says. But the best part of the program, she says, is that it's raising awareness: "I'm excited even if it saves one child."

An earlier version of this story said that the Baby Box Co. boxes meet Consumer Product Safety Commission standards. The CPSC does not have standards for baby boxes.